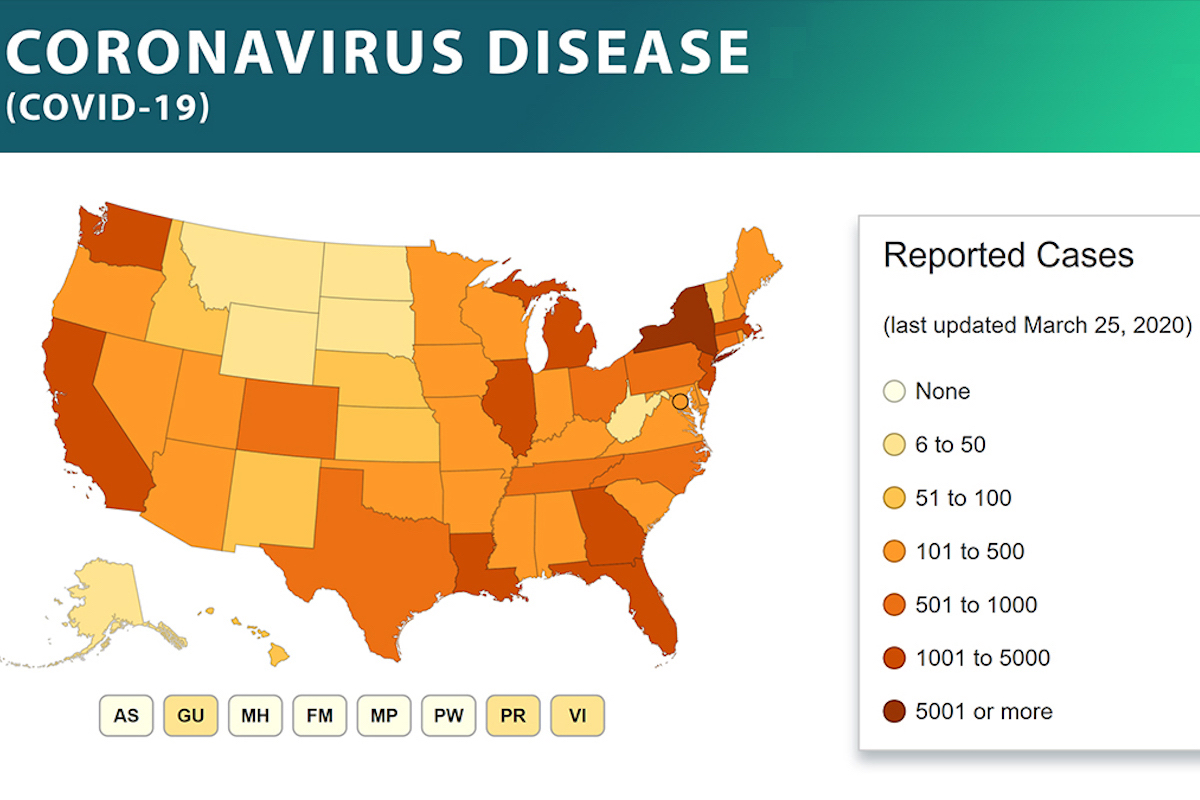 According to statistics compiled by Our World in Data (OWD), the number of newly confirmed COVID-19 deaths increased yesterday. The data, as originally assembled by the European Centre for Disease Prevention and Control (ECDC), indicated 3,461 new confirmed COVID-19 fatalities globally, up slightly from Saturday’s newly reported deaths (3,318). As has been the case throughout mid- and late March, the new deaths were concentrated largely in Italy (887), Spain (832), the United States (411), and France (299). Taken together, these four countries accounted for about 70 percent of all newly reported global deaths—about average for the past three weeks.

In the United States, about half of all cases are located in and around New York. As the New York Times reports, the city’s emergency-response services are becoming overwhelmed, and health care workers are beginning to be faced with the sort of live-or-die decisions that Italian doctors have been required to make. As discussed below, France has substantially addressed the problem of regional case-load concentration with an innovative national-level plan. Unfortunately, this sort of planning seems to lie completely beyond the organizational competency of the US system, and basic policy determinations are being made on the basis of public political posturing.

Much of the blame for this has been heaped on Donald Trump, who ignored early warnings, and reportedly remains far more preoccupied with economic indicators and his own political status than the growing health threat posed by COVID-19. But it’s also clear that the disastrously slow US response can be traced to many other factors as well, including low capacity at cash-starved state and municipal health departments.

On the issue of testing, the Sunday edition of the New York Times has an excellent long-form report on how, in the words of the (print) headline, “testing blunders cost vital month in virus fight.”

Many of the issues identified by the Times have nothing to do with Trump, or even politics more generally, but rather inhered to the bureaucracy of the Centers for Disease Control and Prevention and other agencies. The CDC was slow to roll out a reliable COVID-19 test, even as the FDA approval process prevented (or at least discouraged) third parties from developing their own tests based on the guidelines that already had been developed by a German company, and used by the World Health Organization to assist dozens of laboratories all over the world. The United States is known as a bastion of free enterprise. Yet ironically, it was the United States that was hamstrung by bureaucracy in the race for a comprehensive testing regime, even as governments in Europe and Asia were successfully enlisting private companies to generate millions of needed testing kits.

As I’ve argued in this space several times, predicting the path of this pandemic is difficult, because people are modifying their habits quickly, and it’s not clear how the effects of these behaviours can be individually measured, let alone mathematically modelled. But the United States presents an extra layer of predictive complexity, since it is one of the few heavily affected nations on Earth (Brazil being another example) where dominant elements within the political class continue to question the severity of the health risk associated with COVID-19. Not coincidentally, it is also one of the few heavily affected nations that has failed to develop any kind of clear national strategy. In this leadership vacuum, states and municipalities have been forced to jump in. In other cases, civic and business leaders have been forced to act without clear direction. This has created a patchwork of policies and behaviours that, from a predictive standpoint, is unusually opaque.

An example of a more coherent national strategy can be found in France, which has implemented a plan to run special medical trains from the heavily afflicted eastern sections of the country to western hospitals that haven’t yet seen their caseloads spike. (Each train cabin will have space for four COVID-19 patients and six health workers. It’s essentially a hospital on wheels.) Increased ICU capacity across the board is eventually going to be one of the results of this pandemic in all affected nations. But in the meantime, France’s rail-based solution seems like a great way to equalize local surges through regional dispersion.

There is no area in France where the devastation approaches that of Italy’s Lombardy region (let alone the city of Bergamo). But some French areas have been hard hit, including the border city of Mulhouse (whose population of 110,000 is similar to that of Bergamo’s 120,000). As with that fateful soccer game in Milan where so many Bergamaschi were infected, Mulhouse’s original outbreak was powered by a one-off event: According to a Radio France investigation, this was a local evangelical gathering from February 17th to 21st attended by up to 2,500 worshipers. According to a local source, “during these five days, the faithful greeted each other, kissed each other and held hands as they prayed.” As many as 1,000 of these people reportedly ended up infected—though estimates vary wildly, suggesting that contact tracing in this part of France remains incomplete. One of the attendees, a nurse from Strasbourg University Hospitals, reportedly infected something like 250 colleagues—astounding if true.

The religious nature of Mulhouse’s super-spreading event (SSE) suggests obvious parallels with the epic Shincheonji Church of Jesus outbreak in Daegu, South Korea, and with the much smaller (and less studied) synagogue-based cluster in New Rochelle, NY. More broadly, like most COVID-19 SSEs, the Mulhouse outbreak featured (1) a large number of people (2) heavily concentrated (3) in a largely indoor setting. Moreover, as with many COVID-19 SSEs, it featured a large or even predominant contingent of older people. Some of the pensioners who attended the Mulhouse-area event apparently seeded their own smaller COVID-19 outbreaks in other parts of France, including Corsica.

I am unaware of any comprehensive global database of COVID-19 SSEs, but it would be useful to have one. The only reason I was alerted to the Mulhouse SSE was thanks to a reader who works at a nearby French hospital where some of the patients are being treated. He offered me this insight as well: “We have a lot of clusters in our retirement homes—where a community-like life is organized, with collective lunches and activities—but not in our dialysis center, where patients are separated, [even though] the patients are [on average] sicker in the dialysis centers.”

A common element of SSEs is direct, close-range, face-to-face interactions among people engaging in socially intimate and unguarded forms of activity, such as prayer, cheering sports events, grieving the dead, or dancing. Coughing and sneezing while being attended to by medical personnel or nursing home staff also is an efficient way of spreading the illness. By now, most readers will know of the outbreak at Life Care Center in Kirkland, Washington, where two-thirds of the residents ended up infected and 35 cases proved fatal. But there are numerous other examples in this category. At Peconic Landing, a quarter-million-dollar entry-fee retirement community in Long Island, NY, six have died. At St. Joseph’s Senior Nursing Home in Woodbridge, NJ, 24 residents are infected.

For similar reasons, it is not surprising to learn that other SSEs mentioned by the CDC have taken place in commercial gymnasiums. Or consider the niche sport of curling, in which participants pair up and slide sideways down the ice, their faces mere inches from each other as they heave away, vigorously sweeping the ice surface immediately in front of a sliding stone. (I have embedded a video, immediately below.) This pair often is joined by a third curler as the stone slides toward the far end of the ice. And in some cases, one also sees the player who originally delivered the stone screaming away on his own account. It’s basically one big saliva storm. And so no one should be particularly surprised that a quarter of Alberta’s COVID-19 cases originate with a single recreational curling event in Edmonton.

Communal singing is also a great way to spray down a large number of people with germs. In Singapore, almost a quarter of all cases are linked to the so-called Safra Jurong Cluster, named after a restaurant that hosted a February 15th Chinese New Year celebration. Health officials found that the event centred around a group of Taiwanese C-pop enthusiasts who also attended singing classes and karaoke together. And in Japan, 106 cases have been linked to Valentine’s weekend J-pop performances. “At one of the Osaka clubs where the outbreak occurred earlier this month,” the Times reports, “a group of 40 young women attended a performance by a boy band on Wednesday, jumping and waving their hands in a small, unventilated space for close to two hours.”

Seen in retrospect, these are all incredibly high-risk activities. But it also may be a source of optimism to understand that so many cases resulted from such a small handful of episodes, especially since these are the sort of situations—large, densely packed gatherings featuring agitated, blissed out, or otherwise stimulated strangers breathing on each other heavily at close quarters—that can be avoided without bringing normal life to a halt. And it’s notable that one does not hear many reports of high-volume COVID-19 SSEs being generated in, say, college classrooms, trains, passenger aircraft, movie theaters, and other contexts that don’t feature institutionalized face-to-face contact, even though these venues also feature high levels of human concentration.

The latest research on COVID-19 tells us that “the major transmission mechanisms are not fine aerosols but large droplets.” And as any engineering or physics undergrad student knows, large droplets surrender to gravity in a more immediate way than fine aerosols. Expelled from one’s mouth at a velocity of anything less than a meter per second, they generally will hit the ground within a meter and a half—which is why stopping COVID-19 will prove much easier than stopping a disease such as, say, measles, which (in the days before vaccination) was transmitted easily through aerosols. (There’s a great piece on this subject by a cell biologist, which you can find here.)

The speed of expelled human air during ordinary respiration and speech varies widely, but the most obvious social contexts to interdict are those in which that speed is ramped up by sneezing, coughing, yelling, cheering, singing, or (as in a gym) labored panting. And, given what we now know about the droplet size and ballistics associated with COVID-19 infection, it isn’t clear why public-health warnings do not now include the simple exhortation that everyone speaking in proximity to others talk more softly, as well as lower the vertical angle of attack of expelled air, mask or no mask.

To repeat a theme: Beating COVID-19 is going to require that we apply our resources carefully and target behaviours that actually serve to transmit the disease. Wednesday night Karaoke? Spinning class? Church-basement singles-night dance lessons? All suspended till further notice. But parks, retail stores and restaurants? That’s something we need to start thinking about.

Amidst a pandemic, there isn’t any form of social contact that’s 100 percent safe. But hanging out in sedate fashion with a friend or two may soon be a risk worth taking—so long as it is permitted by local health restrictions, and everyone remembers not to spontaneously break into J-pop.