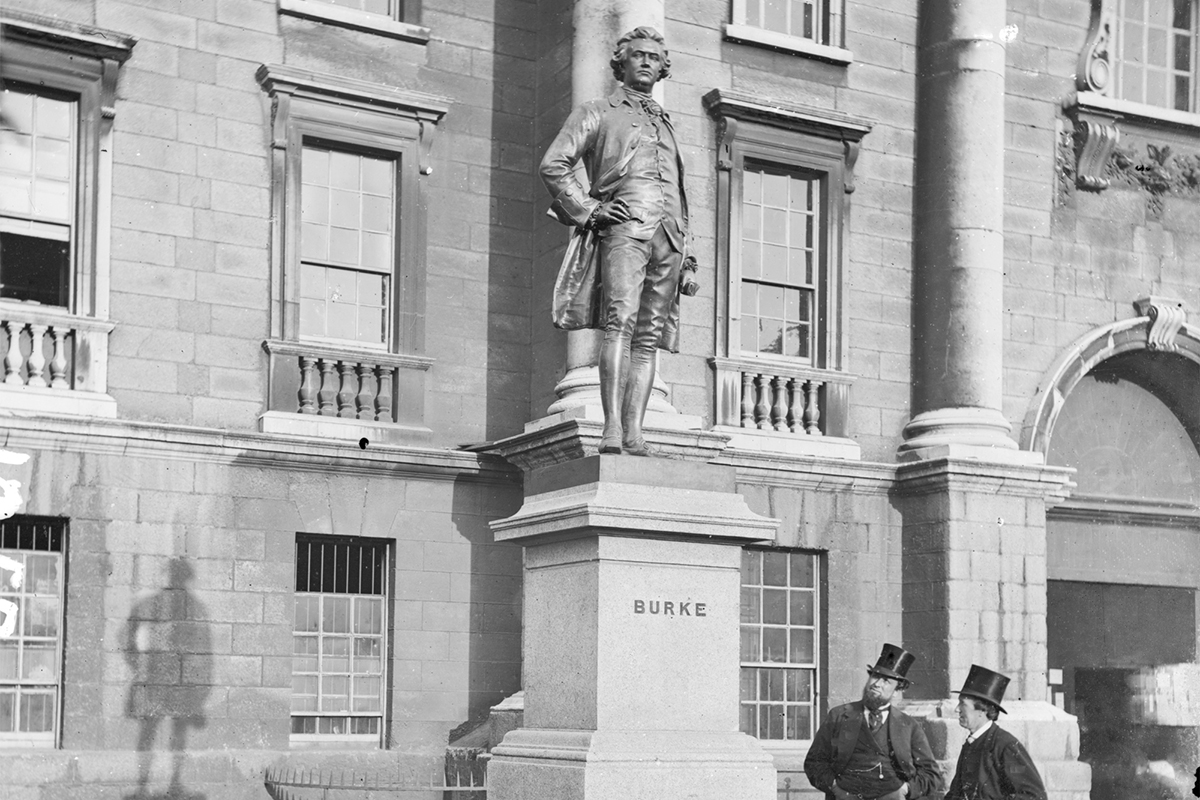 It is no secret that conservative political views are underrepresented in the academy. In Passing on the Right: Conservative Professors in the Progressive University, John A. Shields and Joshua M. Dunn Sr. cite surveys that put the number of professors who self-identify as conservative in the humanities at between four and eight percent. It should therefore come as no surprise that conservative political views are scarce in philosophy. While it may seem impolite to raise this issue when the philosophy profession is contending with a rather different diversity problem, the fact itself is philosophically interesting. It is strange, for instance, how rarely philosophers agree about a wide range of thorny philosophical problems, and yet they appear to be unified on a range of complex issues that divide the American public roughly in half.

Why are there so few political conservatives in philosophy? Some hypotheses stand out immediately. One may notice that philosophy requires a critical attitude that sits uncomfortably with the characteristically conservative respect for authority. As a profession, philosophy also does not offer career prospects that risk-averse conservatives may value higher than their more idealistic liberal counterparts. Lastly, as Peter K. Jonason has shown,1 openness to ideas and experience—the philosophical character trait par excellence—is associated with political liberalism, not conservatism.

What do we know about conservatives in philosophy? In the absence of good data—and there is little—it is difficult not to fall back on anecdote and conventional wisdom. One resource that is available, however, is the PhilPapers Survey from 2009, which surveyed members of the philosophy profession on a broad range of philosophical issues. What does the survey tell us about conservatism in philosophy? Perhaps most notable is that “conservatism” is not even listed as an answer to the only question about political philosophy: “Politics: communitarianism, egalitarianism, or libertarianism?” Among faculty or Ph.D. holders, about a third accept or lean toward egalitarianism, 16 percent communitarianism, and 13 percent libertarianism. The largest percentage (37 percent) is “Other,” which covers various hybrid, nuanced, noncommittal, or agnostic positions. Nevertheless, it seems unlikely that conservatives make up a large chunk of that percentage. The egalitarian tilt goes up to 50 percent if you isolate respondents with social and political philosophy as an area of specialization. Meanwhile, of the 153 conservative academics in the humanities interviewed by Shields and Dunn Sr., 10 percent were philosophers.

The first reason draws on one of John Stuart Mill’s best-known arguments for freedom of speech in On Liberty. Mill, you’ll recall, argues that would-be-silenced opinions either a) turn out to be true, or b) even if false, are beneficial for the light they produce when colliding with the truth. And on highly contested topics, especially political ones, more typically the opposing opinions share some of the truth between them, producing a salutary synthesis. Importantly though, Mill maintains that in order to obtain these beneficial effects, we must hear the opposing opinions voiced by those who actually hold them, with arguments strongly formulated, not simply parroted by their ideological opponents. Thus, even if conservatism turns out to be false (or detestable), there are good epistemic reasons to keep its ideas in the conversation, and defended by its sincere adherents.

The second reason concerns the lack of representation of conservative views in philosophy relative to the general population. According to recent data, these are underrepresented at the faculty level by about 75 percent. There may or may not be discrimination-based reasons for this fact, and it would in any case probably be difficult to prove. Moreover, I see little reason to expect a rarified discipline like philosophy to reflect isometrically the demographics of the general population. Nevertheless, given that roughly half of the American population has conservative political views, most of whom are taxpayers who fund institutions of higher learning, and some of whom attend such institutions (or pay for their children to), such persons are either subsidizing views they disagree with, or being undereducated by a faculty that does not take their moral viewpoint seriously. Consequently, conservative persons in the general population, who may crave intellectual support for (or at least discussion of) their views, may then look to more disreputable, dishonest, and disgraceful sources in this new age of decentralized information, political extremism, and “fake news.” (This point was made by Steven Pinker in a discussion of “Is Political Correctness Why Trump Won?” Unsurprisingly, he was vilified as “alt-right” for pointing this out.)

The third reason looks to the psychological sources of political disagreements. Jonathan Haidt, for instance, has argued that moral intuitions operate like taste receptors (e.g. salty, sweet, bitter, etc.)—everyone has access to them, but they are activated differently depending on social, cultural, and educational factors, just as worldly cuisines combine universal flavors differently. The critical point here is that liberalism appears weighted toward three moral intuitions—fairness, harm, and liberty. Conservatism, in contrast, draws on a fuller palate, adding to these, moral intuitions about loyalty, authority, and sanctity. Are these intuitions somehow less interesting from a philosophical point of view? They make up the moral psychology of family, patriotism, and the sacred. Liberalism confines these matters to the private realm or ignores them entirely. But given how important these areas of life are to the average person, it is no wonder that there is so little interest in academic political philosophy when its cuisine is confined to intuitions about harm, fairness, and liberty. Such parochialism is unlikely to win the hearts and minds of those who search for meaning beyond justice.

There are also practical lessons here about the pressing issues of diversity and political polarization. The diversity problem has gripped philosophy due to its well-known shortcomings in representing the pluralistic culture of liberal democracy in what is, admittedly, a homogenous history judged through the lens of culture, gender, race, identity, and so on. Such efforts to include hitherto marginalized persons in the great tradition of philosophy is laudable. There are also, as I’ve argued, good reasons for diversity from an epistemic standpoint, where the truth is more likely to come from the collision of many different experiences and viewpoints. That was Mill’s point. But in order for Mill’s point to be put into practice, we must also have viewpoint diversity. A community in which people look different, come from different cultural backgrounds, yet reach the same conclusions on a surprising number of complex issues is not a community that values the pursuit of truth.

Diversity is also not an unalloyed good. For, in time, diverse (and divided) opinions about fundamental ideas like justice and the good are likely to slowly tear at the social fabric of a society, risking the dangerous levels of political polarization witnessed in recent years. Without a healthy mix of a conservative and liberal center, the poles of left and right are much more likely to tilt toward the extremes. And if there simply are no conservatives, as we witness in philosophy, then people will quarrel over the minute details about what true equality requires, rather than working on approximations to justice that can only be found in conversation and compromise.

The reconciliation of diversity and equality is sometimes sought by the addition of “inclusion” to form the triad of “diversity, equity, and inclusion.” Consider the slogan I witnessed recently on a college campus promotional banner: “To unify and to be inclusive, we need to accept and value all perspectives and experiences.” But it is, by definition, impossible to unify around all perspectives and experiences. Every social group orients itself around an agreement to treat some values, perspectives, and experiences as foundational, some as tolerated but not promoted, and others as excluded or excised altogether. One need only wonder about the extent to which a conservative perspective and experience is tolerated—much less accepted and valued—for that slogan to ring false.

The glue for diversity and the solution to political polarization is to revitalize the central conservative notions of social-membership, responsibility, love of country, and a shared morality. Such notions constitute the philosophy of “home,” whether that be the home of family, country, or neighborhood. The conservative insight here is that, as Haidt puts it, “you can’t help the bees by destroying the hive.” A healthy political order depends on social membership, and social membership is held together by loyalty, authority, and sanctity—things the group holds sacred. We exercise reason in service of these things, not by way of overcoming or transcending them. “Reason,” as Hume put it, “is and ought only to be the slave of the passions.”

What, if anything, should be done about the problem I have identified? Conservatives themselves are unenthusiastic about affirmative action policies designed to increase their number in the halls of the academy. In that case, perhaps the medicine is worse than the disease, as conservatives tend to be champions of meritocracy, even in the face of known biases and disadvantage. If anything, conservatives may also benefit intellectually from their marginal place in philosophy, since they are the beneficiaries of having to defend their views from tough (and sometimes unfriendly) critics. More realistically, philosophers who are not conservatives could make more of an effort to seek out dialogue and discussion from conservatives. After all, there is undoubtedly some level of self-censorship present, which could be alleviated by a genuinely more welcoming and inclusive environment.

Finally, philosophers should refocus their love of abstraction on the love of the actual, if only for short moments, to appreciate the great tradition of philosophy and the great privilege it is to participate in it. For if anything is worth conserving, it is that. And perhaps, in time, philosophers might begin to take conservatism seriously where it must begin: at home.

Tristan J. Rogers is a Lecturer in the Department of Philosophy and Religious Studies at California State University, East Bay. His research interests lie in political philosophy, virtue ethics, and ancient philosophy. You can follow him on Twitter @tristanjrogers1