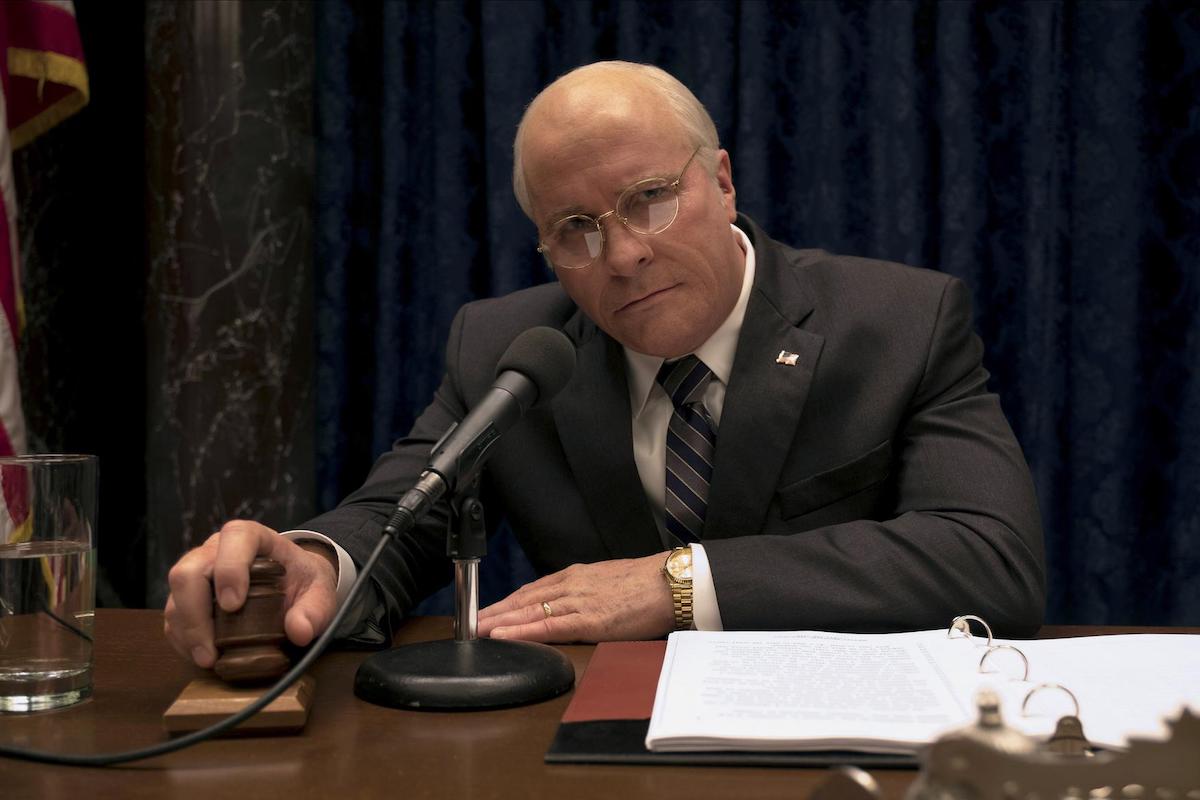 Vice should have been an interesting film. Its subject, Dick Cheney, spent close to four decades embedded in the leadership of the most powerful nation on earth. He was instrumental in orchestrating the War on Terror and the invasion of Iraq. A biopic of a man who has had such influence over recent historical events is a film worth making.

Sadly Vice is not an interesting film. Although it is filmed with Adam McKay’s characteristic wit and energy, ultimately it fails at both storytelling and political analysis. Its characters are shallow, its narrative is chaotic, and its representation of historical events is hopelessly biased. Despite all this, it has been showered with award nominations: eight at the Academy Awards (including Best Picture), six at the Golden Globes, and a further six at the British Academy Film Awards. By any objective measure it does not deserve this level of praise, but in this period of intense polarisation, Vice offers liberal filmgoers an opportunity to revel in what Philip Roth described as “the ecstasy of sanctimony.” The point of Vice is not to educate or persuade or encourage deep thought. What it offers audiences is the petty enjoyment of laughing at the out-group. It’s essentially a feature-length Saturday Night Live sketch in which an array of famous faces (Christian Bale, Amy Adams, Steve Carell, Sam Rockwell) impersonate hated political figures for laughs. Some of the comedy is good. This is a funny film—sometimes very funny—but it’s also grotesque in a way that the filmmakers didn’t intend.

Vice ignores one of the key principles of storytelling: that is, as Aaron Sorkin puts it,  that “a protagonist has to be put through something and be changed by it.” The Cheney of Vice does not change. He becomes more powerful as he gets older, but in all other ways he remains the same. He begins the film as a callous power-hungry demon with no sign of an interior life, and ends it in just the same way. The narrative arc, such as it is, focuses around Cheney’s ongoing battle with heart disease, culminating in a heart transplant—a rather heavily laboured metaphor for his heartlessness. Cheney’s only redeeming feature is his love for his daughters, and even that is undermined by a cynical act of betrayal near the end of the film. Christian Bale has said that he modelled his performance on Satan, but fictional portrayals of actual Satan have shown more nuance than Bale’s representation of Cheney.

We never discover what truly motivates Cheney. As far as I can tell, his only drive is a lust for money combined with an even greater lust for power. None of his Republican allies seem to have any sincere motivating force either. In a particularly revealing scene, the young Cheney asks his mentor Donald Rumsfeld, “What do we believe?” and Rumsfeld simply laughs uproariously. Such naked villainy would be unconvincing in a Bond movie. Is this really how the makers of Vice view their political opponents? The neoconservative Republicans who led the Bush administration may have been duplicitous or callous or deluded—or possibly a combination of all three—but the idea that they believed nothing is absurd. This cartoonish representation of the Right would be funny if it wasn’t so widespread and eagerly applauded.

When Vice shows us ordinary voters, they’re portrayed as either morons or warmongers or both. “I want to fuck someone up!” yells one man in a focus group driven to rage by 9/11. In another focus group scene, the Republican running the session effortlessly fools the group into accepting facts that the audience (of smart liberals, of course) know to be lies. There is a scene in which Lynne Cheney speaks to a group of men at a rally. This is a “left behind” working class community, pushed to the edges by economic change—the soon-to-be inhabitants of Trumpland. Here is a moment that might have provided some insight into exactly why the Cheney project found such success. But, instead, we are offered a caricature. Lynne Cheney spits out invectives against affirmative action and bra-burning feminists to whoops of pleasure from her audience, some of whom are literally shirtless. As far as we can tell, such people are motivated by nothing more than a shallow hatred of liberals and everything they (or, rather, we) stand for.

Some critics have accused Vice of significant inaccuracies, and certainly the film makes allegations against the Bush administration that are controversial. Making serious claims about government wrongdoing within the context of a farce is risky, since the audience is left unsure of what to believe. For instance, in one comic scene we see Cheney advising President Ford and Henry Kissinger to go out on to the White House lawn, expose themselves, place tiny wigs on the tips of their penises, and then jerk each other off. The two men nod along, swept along by Cheney’s powers of persuasion. When these absurdist moments are followed by, to name one example among many, a scene in which Cheney appropriates Presidential authority to an alarming degree in the hours following 9/11, the effect is confusing. I can only assume that the filmmakers assume their audience will believe anything of Cheney, as long as it fits with his malevolent characterisation, and so see no need to clearly delineate between fact and fiction.

I’m not defending the behaviour of Dick Cheney, still less the Republican Party as a whole. I’m a liberal, for goodness sake—I’ve never voted for a right-leaning party in my life. My argument is simply this: Hollywood needs to try harder. These films ought to make some effort to understand people they disagree with, rather than just shoring up their existing reputation for sanctimonious snobbery. Contrary to the assumptions presented in Vice, right-aligned people are not lacking in moral values—rather, according to the moral foundations theory expounded by social psychologists such as Jonathan Haidt, their priorities are different. While those on the Left are primarily interested in the values of compassion and fairness, the Right consider national loyalty and respect for authority to be equally important, if not more so. You can disagree with that position (as I do), but it’s foolish to deny that there is a coherent right-wing worldview to which a great many people are attracted.

There is a reason why the Left keep losing, and it’s not because the likes of Cheney are charlatans who have fooled millions of idiots into voting for them. It’s because the Right tend to do a better job of persuading people than the Left do. Showering a film like Vice with award nominations suggests that Hollywood have not accepted this reality. If Republican voters go to see this film (which they won’t), they are unlikely to come out of the cinema convinced that they were wrong all along about that dreadful Dick Cheney—they’ll be offended, alienated, and even more resistant to voting for the Democrats in 2020.

It is possible to create interesting drama about recent political conflict. In the UK, James Graham’s Brexit: The Uncivil War (Channel 4) attempts something similar to Vice. Brexit follows the figure of Dominic Cummings (played by Benedict Cumberbatch), who was the lead strategist behind the Leave campaign. Both films document a pivotal moment in political history; both follow a “puppet master” figure; both adopt a darkly comic tone; both are intended for a Left-leaning audience—but Brexit is an immensely better film. Dominic Cummings is not portrayed as an evil mastermind who single-handedly engineered Brexit. Instead, he is a channel through which the grievances of the “left behind” bloc of voters are run. A theme throughout the film is the quiet roaring that Cummings hears coming from the ground, the sound of tectonic plates moving in advance of a political earthquake. His brilliance is in recognising this coming shift and harnessing it to his own ends.

As a Remain-voting member of the Liberal Cosmopolitan Elite, I should have hated Cummings for the havoc he wrought, but he is far too complex a character to be hated. This is an emotionally complex drama that has serious things to say about our political times, but it does so with compassion. Like Vice, Brexit features recurring scenes of focus groups, but these actually give us real insight into the reasons why the Leave campaign won. In one climactic scene, a woman reveals her reasons for voting Leave as she sobs “I’m sick of feeling like nothing, like I have nothing! Like I know nothing. Like I am nothing.” Brexit asks us to empathise with our political opponents, while Vice asks us to despise them.

I’m not asking for a sympathetic portrayal of Cheney, or any other right-wing politician for that matter. It’s perfectly legitimate to criticise and mock any political figure. All I’m asking is that liberal filmmakers show some interest in what their opponents think, rather than just dismissing them as hateful or stupid or both. After all, if the Right really are as clownishly demonic as Vice would have us believe, then why do they keep beating us?

Louise Perry is a freelance writer based in Oxford, UK.