The presence of plastic in our oceans has been a growing problem for decades. But only in recent years has it found its way into the public consciousness. In one well-publicized case last year, scientists in Spain discovered the washed-up body of a sperm whale that contained 29 kilos of plastic—a grim intestinal haul that included dozens of plastic bags and a fuel container. On Midway Atoll, a dead albatross chick was found with a stomach full of brightly covered plastic junk, which the bird’s parents had collected and fed to her, imagining it to be food. In a recent study of 102 sea turtles, spanning seven species, every sampled specimen was found to have swallowed plastic material of some kind.

Plastics represent only one component of pollution, of course. But the durability of discarded plastic products presents a special challenge. This quality, which makes plastics so useful to consumers, has turned them into a unique menace to the entire natural environment. As the examples above illustrate, plastic often is mistaken for food by fish, birds and other animals (but of course yields no nutritional value). And marine life can choke on plastic, or become fatally entangled in it.

Usage of plastic in the West has risen dramatically since its first widespread application to disposable consumer goods in the mid-20th century. Being cheap, lightweight, non-porous and durable, plastic also has become ubiquitous as a packaging material. It has become instrumental to the massive expansion of global trade—the “skin of commerce,” as one Australian academic aptly put it.

Plastics tend to accumulate in ocean areas known as gyres, where surface currents converge and there is relatively little wind. The largest of these is known as the Great Pacific Garbage Patch (GPGP), an accumulation of (mostly) plastic waste and debris currently covering 1.6-million square kilometres, twice the size of Texas. While there has been much focus on banning plastic consumer products such as bags and straws, almost half of the GPGP may be comprised of discarded fishing nets; and a further 10%-20% is believed to consist of material that was washed away in the 2011 Tsunami that struck Japan. Analysis of such debris shows that larger plastic objects such as bags and bottles do break up into smaller pieces over time, but this only makes clean-up efforts more difficult.

The primary sources of ocean plastic waste are located in the developing world. Of all the worlds rivers, for instance, the flow from just 10 (eight in Asia, two in Africa) account for 93% of incoming river-transported ocean plastics. Of the 8-million metric tons of plastic annually deposited in oceans, more than 2-million tons is believed to come from river sources—about 1.5-million tons of which come from just one river, the Yangtze, in China. (These figures include both “large plastics,” such as bottles and shards thereof, as well as microscopic fibres and beads that may be invisible to the naked eye.) 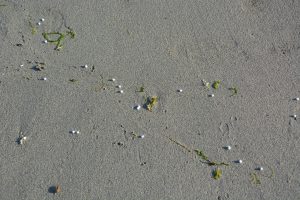 The West’s developed economies generally capture a high proportion of their large-form waste plastic before it enters open water. However, the waste-production profile of oceanic micro-plastics is another story. The majority of micro-plastics emerge as a waste product from the laundering of synthetic clothing and the wear-down of synthetic rubber automobile tyres. Since consumers in the West also tend to wash clothes and drive more than their counterparts in the developing world, they contribute a larger share of this type of plastic. And most of it isn’t captured by waste-management systems, because the particles are too small to be filtered out, or because it enters waterways directly from road runoff.

But there is some good news. Last October (just hours before his infamous meeting with Kanye West, as it happens) Donald Trump signed the “Save Our Seas (SOS) Act,” which had attracted bipartisan support and passed the U.S. Senate unanimously. The SOS Act provides funds for ocean clean-ups in U.S. waters, supports research to improve waste reduction, and promotes the use of trade agreements to spur other nations to improve their own waste-management protocols. This latter stipulation is crucial, because it would require developing countries and their trading partners to stop treating the ocean as a negative externality—i.e. a commons that can be polluted and degraded at no cost.

This will likely serve to drive up the cost of the many cheap consumer goods and packaging materials produced with plastic. But if Western companies—and, by extension, Western consumers—continue to benefit from the low production costs associated with these products (including the low labour costs and relatively lax environmental regulation), then they have a responsibility to ensure that the ensuing waste is managed appropriately. Free-market capitalism has proven effective at supplying goods at the cheapest possible cost to consumers. But it doesn’t serve humanity if the producers aren’t required to impute the associated social costs—including the mass contamination of our oceans—into their profit calculations.

Assuming our primary concern is to reduce the total amount of plastic material entering oceans worldwide, we need to consider how best to allocate our resources on a global scale. Capturing 100% of plastic waste is impossible. And as with other problems of this type, the effort will yield diminishing marginal returns. Huge benefits can be had simply by targeting the biggest sources of contamination. As noted above, for instance, the plastic waste emitted into the ocean by just a single river—the Yangtze in China—eclipses all the world’s other studied rivers put together. (It should be noted, however, that some of this waste originated in the West, since, until recently, China was the world’s largest importer of plastic waste for recycling.)

This is not to deny the importance of maintaining social norms against littering and the excessive plastic use in the West. Every stray plastic bag or bottle that we remove from a waterway, beach or park is one fewer threat to marine life and ecosystems. Reducing our demand for plastic objects and packaging, and reusing them where possible, helps reduce the amount of plastic that our waste management systems need to process.

But such public-awareness campaigns can take on a life of their own, and blind us to the real source of the global problem. Single-use plastic-bag bans, drinking-straw bans and elaborate container-deposit schemes are all examples of policies that mix high visibility with scant global impact. Policymakers and legislators in the developed world may favour these measures, since they give the appearance that governments are acting on the issue of plastic waste, but they are unlikely to move the needle much on the total amount contained in our oceans, which mainly consists of micro-plastics, waste from (unregulated or thinly regulated) developing-world sources and discarded fishing nets. Most Western jurisdictions already do a relatively decent job of ensuring that large waste of any kind (including plastics) is either buried or safely processed.

Tackling the issue of plastic pollution will be a major challenge of our time. It is a challenge that will have to be met primarily at the level of government policy-making and enforcement—not personal-consumer choices made at your local coffee shop or fast-food restaurant.

Andrew Glover is an Australian sociologist. He tweets at @theandrewglover.

Andrew Glover is a sociologist based in Melbourne.