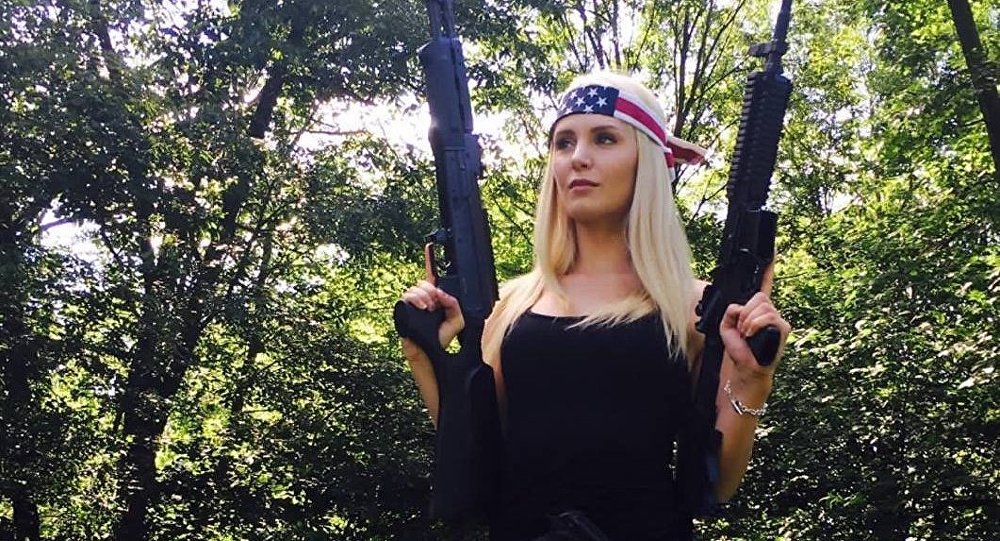 Australian news coverage has been dominated in recent days by self-styled Canadian right-wing “provocateur” Lauren Southern — a 23 year-old Youtube personality who travels the world, speaking out on issues ranging from anti-feminism to multiculturalism and immigration. Southern believes that Australia should not accept immigrants from Asia or Africa. “Do you want to retain your culture?” she asks fans in a recent video promoting her Australian tour. “Do you want to retain your borders, family, identity? Or will the boats keep coming? Will the no-go zones keep growing? And will you become another victim of multiculturalism?”

Unfortunately, it doesn’t matter that the boats stopped long ago and these ‘no go zones’ do not exist in Australia — plenty of followers have skolled the Kool-Aid. It certainly helps that protesters drawn to her recent Melbourne show resorted to storming the stage in a bid to shut the event down after the Victorian police slugged her promoters with an unjustified $68,000 security bill — both events which have helped her promote her tour while drawing sympathy from sections of the public.

Professional provocateur @Lauren_Southern has reportedly been sent a $68,000 bill from Victoria Police https://t.co/Nqp6lhVDVU

Southern professes that her views are not racist, telling us that her criticism of Muslims could not possibly be racist since Islam is a religion and not a race. Yet she conflates the concepts of race and culture when they suit the anti-immigrant narrative she seeks to weave. She tells us that the only way to preserve Western values is if we limit or exclude immigration from countries which aren’t White.

One wonders what Western value she was trying to preserve when she joined a European far-right group in blocking boats involved in search-and-rescue missions for asylum seekers stranded on leaky rafts in the Mediterranean Sea. When an asylum seeker boat capsized near Christmas Island 8 years ago, resulting in deaths, Australians of all political stripes showed compassion and sympathy in the wake of a tragedy and directed their anger toward the people smugglers and government policies responsible. Sadly, this is a compassion which Southern seems to lack despite showing compassion elsewhere —for example, in her coverage of attacks on white South African farmers.

There is certainly a wrong way to do immigration and the European approach in recent years is a prime example. Pressuring less-wealthy countries to accept asylum seekers, many of whom entered the continent with little vetting, has given far-right parties a cause celebre while raising legitimate concerns about national security, crime, and free-riding on welfare. It has also raised the concern that economic migrants are taking the places of those genuinely fleeing persecution.

Other genuine concerns include the disproportionate influx of young men without family support, distinguishing those fleeing persecution from those fleeing poverty. Over a million asylum seekers entered Germany with the backing of Chancellor Angela Merkel who was finally forced to back down after a political backlash which has seen far-right parties not only rise in Germany but across the continent in Italy, Hungary, Austria and Poland. Even billionaire George Soros, a public enemy of the anti-immigration crowd for his funding of progressive organisations, declared earlier this year that the migration crisis one of the greatest threats to the European Union’s survival — vocally backing the right of EU member states to determine whether they will accept refugees — surprising many of his detractors.

Although Europe’s ‘open borders’ and the sheer volume of immigrants can be blamed for the problems, the blame also lies with welfare policies and industrial regulations which act as disincentives to finding gainful employment. Bad policies have paradoxically led to many asylum seekers depending on the charity of European taxpayers for longer than they would need to, leading to the ghettoisation of some communities. Due to strict laws which protect native workers’ rights, many newcomers are forced to rely on the black or grey labour market, leaving them vulnerable to threats, crime and exploitation. Yet incentivising immigrants to work through the loosening of industrial regulations and the paring back of welfare would hasten their integration into wider society and dispel the uncomfortable image of groups of unoccupied men congregating at train stations and other public places.

The Australian experience has been markedly different. While the government’s ‘turn back the boats’ policy remains controversial, it has allowed for stricter controls and vetting of new arrivals and has decimated the market of exploitative people smugglers. As a result, headlines about drownings off our northern shores have not been seen in years. It has also meant a decline in the number of asylum seekers who continue to languish in offshore detention centres.

There are calls to implement tests for cultural values including respect for the rule of law and freedom of speech amongst other things we broadly value. And why not? A vast majority of immigrants come here seeking a better life precisely because Australia is seen to uphold those values. As an immigrant from India where anti-blasphemy laws have led to the persecution of atheists, Australian values was certainly one of many draw-cards for me. The same can be said for many immigrants from places like Iran and the Palestinian territories. To Southern, none of this matters because of the place of birth on our passports. But hey, this is about culture and not race, right?

Australia’s Skilled Immigration Points Test also means that we can accept high per capita immigration and not worry about migrants not being able to contribute to the economy. Immigrants are more likely to start businesses that employ people and pay taxes that support our ageing population. While some neighbourhoods take on an ethnic character over time, this by no means implies the existence of a ‘no go zone’ or any lack of integration. Social scientist and urban planning professor Sandeep Agrawal of Ryerson University notes that integration is a multi-generational, ongoing process and a reflection of an individual’s values and their participation in wider public life — not their postcode.

This is by no means limited to non-white immigrants. Predominantly Italian and Greek neighbourhoods continue to retain their character and an overrepresentation of these demographics in parts of our major cities decades after they sprung up. In many cases, one generation of immigrants moves on as another moves in, as seen in the Toronto, Canada area where traditionally Italian, Jewish and Portuguese neighbourhoods have gradually given way to newer arrivals from Brazil and other nations.

It is perfectly possible for someone to practice their Islamic faith, speak the language of their heritage with their relatives, eat their traditional food and still remain a patriotic Australian who speaks English, works hard or runs a business, cheers the Socceroos and respects our laws. Coalitions of Islamic community organisations have vocally condemned terrorist and terror-sympathising groups. Why wouldn’t they? A vast majority of the victims of these groups are Muslims. Many have fled here from countries which have fallen prey to groups like ISIS taking advantage of power vacuums created in-part by failed Western foreign policy and military intervention. This is a vastly different picture to the caricature painted by Southern which reflects a small minority she actively seeks out to portray as the norm.

The Trump administration recently received flack for ignoring a report that found that even refugees in recent decades have been a net benefit to the system, paying their fair share in tax despite a reliance on government services by many to get a start in their initial years. This net fiscal benefit is likely to broaden once the impact of their children and grandchildren are factored in.

None of this denies that different communities have their own issues. Malcolm Turnbull recently spoke out about African gang crime in Melbourne. There is no denying the overrepresentation of Sudanese youths in statistics for some crimes, including violent crimes, relative to their population size. And this an issue that has been raised by members of their own community. If we fail to have a frank discussion about these difficult issues and how to address them, we don’t just let Melbournians down, we let the Sudanese Australian community down. However, the discussion must acknowledge all the facts — Melbourne is undergoing a general spike in youth crimes and certain violent and sexual offences.

Australia is by and large, a successful pluralistic, multiethnic society where people of all stripes, racial and ethnic backgrounds are part of a dominant culture while retaining aspects of their cultural heritage and individual identity. Although this integration is never immediate and can sometimes be an intergenerational process, prudent policy decisions mean that we’ve avoided the pitfalls made in European nations and continue to fine-tune a system that welcomes people willing to embrace our way of life. Debate continues about our intake of immigrants due partly to stresses placed on our urban infrastructure and services by population growth and ensuring that everyone feels a part of the Australian project as they settle and build a new life as Australians. If these issues are to be resolved, our positions must be rooted in reality. Not the emotive dictates of demagogues.