For its own sake if nothing else.

Pew Research Center recently released survey data showing that 58% Republicans and Republican-leaning Americans believe US colleges and universities have a negative impact on our nation, a number that has been steadily increasing over the last several years. Only 19% of Democrats and Democrat-leaning Americans hold such a negative view. 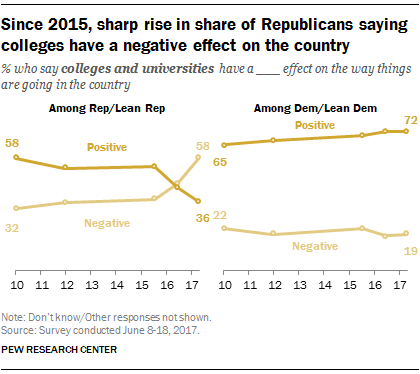 Many social commentators and academics have been quick to blame conservative media for this changing view among Republicans by arguing that right-leaning outlets have unfairly portrayed colleges as places of radical left activism and hostility toward conservatives.

Critically, these are all demonstrably real issues, not right-wing fantasies. It is important to note that daily life on most college campuses is routine and incident free, and this fact is often forgotten. Also, some colleges and universities have done an excellent job avoiding any drama. But it is undeniable that there is a growing authoritarian, anti-free speech, anti-conservative, and, frankly, anti-science, movement happening in American academia.

Try the following thought exercise. Imagine all of these problems in academia and swap the political association from left to right. Imagine conservatives largely control the academy, particularly the fields that have the most to say about social and cultural life. Imagine the social sciences and humanities treat conservative activism as scholarly work. Imagine conservative scholars and activists calling any empirical evidence they don’t like shoddy and prejudiced. Imagine conservative academics ostracizing or silencing anyone who voices a divergent perspective. Imagine that research reveals conservative professors want to prevent liberal academics from joining their ranks. Imagine it is liberal speakers being shouted down or disinvited. Imagine far-right student protestors destroying property and threatening or committing violence against liberal professors, students, and speakers. Imagine conservative controlled student governments trying to prevent liberals from having their own student organizations. Imagine liberal students feeling they need to keep their political beliefs hidden.

With this alternative academic universe in mind, now tell me that liberal media outlets wouldn’t be giving a considerable amount of attention to campus culture and Democrats wouldn’t see colleges as having a negative impact on our country.

It is important to emphasize that the problem is bigger than the campus censorship that receives much of the media attention. Good campus leadership could quickly address that issue. The fact that some academic disciplines, particularly in the humanities and social sciences, are increasingly blurring the line between dispassionate scholarship and ideological activism is a deeper and more difficult problem to confront. And it is a problem that too few academics and academic professional organizations appear motivated to address.

Many on the left not only blame conservative media for shifting views among Republicans, they also argue that conservatives are anti-education. First, keep in mind the concerns about campus culture and the ideological biases of certain fields I just discussed. Now, add worries shared by many Americans regarding the economic value of many degrees, the rising cost of a college education, and financially debilitating student loan debt. People shouldn’t assume that faltering faith in American colleges and the academic class reflects a disdain for education. Maybe Republicans see real issues that fall within the liberal blind spot.

Progressive academics and activists often fancy themselves as people who speak truth to power. For many potential students struggling to find their way in an increasingly competitive and economically uncertain world, colleges and universities hold a lot of power. Those in control of colleges and scholarly disciplines need to take a hard look in the mirror and consider some unpleasant facts about the current state of academia.

I am a professor but I do not live in a bubble. I am fortunate to have a family and reside in a community with many liberals, conservatives, and centrists living in relative harmony. Parents of all political persuasions have the same hopes and fears for their children. The idea that Republicans don’t care about education and are being manipulated by right-wing media is more of a comforting lie for liberals than an inconvenient truth for conservatives.

Many argue that American colleges and universities are the envy of the world. Indeed, people from all over the globe flock here to pursue their educational goals. Our institutions of higher learning should remain a source of great pride and opportunity for Americans regardless of political affiliation. The United States is already divided in many ways and our collective faith in many institutions is crumbling. In a time with so many pressing national and global demands, we can ill afford to lose faith in our colleges and universities, institutions that make such vital contributions and help so many Americans pursue their dreams.

The Fight Over What Children Learn