I recently had the opportunity to see The UnRedacted, an American documentary film about a group of al-Qaeda-trained men who’d been transferred from the Guantanamo Bay detention camp to the “Prince Mohammed Bin Nayef Center for Advice and Care,” a Saudi Arabian rehabilitation center for extremists. The screening I attended was at a 50-seat theater off Wilshire Blvd. in Los Angeles—a somewhat obscure venue for a film that had received many glowing reviews following its virtual premiere at Sundance (under the name Jihad Rehab) back in January. Its fall from grace is owed to a group of primarily Muslim filmmakers who alleged the film is Islamophobic. Their complaints caused film-festival executives to disavow the film; which in turn prompted the movie’s own executive producer, Abigail Disney (who’d previously hailed the film as “brilliant”), to denounce it as well, amidst a flurry of apologies for having “hurt those whom I have always meant to support.”

At the recent LA screening, I watched alongside the filmmaker, Meg Smaker—who, unlike the four ex-Gitmo prisoners profiled in the documentary, is neither male, nor Muslim, nor Arab. As the film rolled, I waited for the problematic scenes that had led to its cancellation. According to the filmmakers who’d successfully demanded the film’s ouster from Sundance, it was “ethically flawed and devoid of critical context,” and so exacerbated “problematic representations of Muslims and/or people from communities directly affected by Islamophobia.”

But those scenes never came. Instead, I learned about four men who’d been detained at Guantanamo by my own government without any formal charges. They were open about the terror plots they’d been involved with, and the casual nature of these descriptions was unnerving. In the scenes set at what’s billed as the world’s first extremist rehabilitation center, these men were shown engaging in art therapy, self-reflection sessions, and efforts to learn about banal everyday subjects such as budgeting money. I smiled as the men poked fun at each other during their efforts to learn the secrets of becoming successful husbands and fathers. The expressions of vulnerability seemed to catch the men off guard, and me as well.

I was equally fascinated by the woman who’d made the film. Smaker is a husky blonde former firefighter, not the sort of filmmaker who might easily blend in within Saudi society. After 9/11, she told the audience, her firehouse in northern California had become contaminated by anti-Muslim bigotry. Popular mainstream media was presenting world events through a simplistic narrative of good versus evil—Hollywood’s favorite trope. Smaker, who was then just 20 years old, ended up quitting her job and travelling to Afghanistan, where she lived with a family in a small village. She reports being treated with love and respect, and felt inspired to study Arabic and Islam. Smaker landed a job as a firefighting instructor in Yemen, which is also where she learned about the “Jihad Rehab” program (as people called it) in neighboring Saudi Arabia.

Just getting a film accepted into Sundance represents a significant accomplishment for a filmmaker. And Smaker’s film attracted international notice. The Guardian, hardly a right-wing media outlet, gave it four stars, judging it to be “a movie for intelligent people looking to have their preconceived notions challenged.” That review was published on January 23rd, just a few weeks before Sundance Institute CEO Joana Vicente apologized to critics for screening the film. In early 2022, Smaker had been potentially looking at millions of dollars in sales—more than enough to recoup the million dollars it cost to make the film. Now she has nothing but a list of debtors.

It’s notable that, of the six filmmakers whose complaints sparked the cancellation process in the first place, all had applied to have their own films admitted to Sundance (one successfully). This included Zeshawn Ali, who’d taken part in an Independent Filmmakers Documentary Lab workshop alongside Smaker. She’d asked him for constructive criticism, and had made some of his suggested changes (though not all). Following the positive reviews heaped on The UnRedacted, Ali put his name on the open letter denouncing the movie. And it’s hard to avoid the suspicion that professional jealousy played a role.

Disney’s attack on Smaker’s film—presented, somewhat passive aggressively, in the form of an ostensible apology for her own actions—contains some arguable points about the way the film was made. For instance: “I should have pushed back on the idea that the protagonists consented to appear in the film. A person cannot freely consent to anything in a carceral system, particularly one in a notoriously violent dictatorship.” But a lot of what Disney wrote seems to comprise a generalized manifesto about racism, and her own progressive views on it:

Adding to the weight of two years of pandemic trauma, a nation that seems to be melting down around us, and bone-deep exhaustion and anger over centuries of racist patterns, systems, assumptions, and practices was never my intention but that has certainly been the outcome … I failed, failed, and absolutely failed to understand just how exhausted by and disgusted with the perpetual representation of Muslim men and women as terrorists or former terrorists or potential terrorists the Muslim people are. That was a failure of empathy and respect on my part—and therefore the gravest of failures.

Disney has not only turned on Smaker, but apparently is even campaigning for her critics to be given more power to block allegedly problematic films (“more community input on inappropriate content”) while receiving more money for their own projects (“access to resources, lifting marginalized voices, and a plan for the future of our field that is both accommodating of new commercial and nonprofit realities as well as respectful of perspectives that come from the margins”).

To be clear, we should all stand opposed to oppressive political systems. The United States has inflicted many abuses on Americans and non-Americans alike over the last two-and-a-half centuries. And Gitmo is hardly the only US prison facility whose conditions should inspire an overhaul of the so-called carceral state. I’ve been on the inside of various pens, thanks to having brothers who’ve spent time moving in and out of jails on minor drug offenses. While my brothers did not grow up in a dictatorship, they did grow up under-educated in Philadelphia’s inner-city neighborhoods. Drugs were their chosen way out, and one of them didn’t make it.

Like all thought-provoking movies, The UnRedacted left me with a lot of questions—like why these men were detained by my government for so many years without ever being charged with crimes. And I walked away troubled by the regime in Saudi Arabia, too, notwithstanding the relatively enlightened nature of the rehab program described by the documentary. But I was also deeply touched and fascinated by Smaker’s ability to get these men to open up to her.

During the Q&A that followed the film’s screening, she explained that it took her a long time to build up productive relationships with the facility’s residents. We learned that it was only after Smaker had interviewed over 150 detainees that she encountered a newly arrived group from Yemen, the country where Smaker had learned her Arabic. This commonality helped bring down the walls between filmmaker and subject. And it was from among this group of men that Smaker found the set of four volunteers who agreed to be filmed over a period of three years.

It’s ironic that Smaker and her film stand accused of peddling Islamophobia, because the effect of watching The UnRedacted is precisely the opposite. Notwithstanding all of the usual stereotypes I’d internalized, I started to see the men on screen as fully human. There’s no comparison to be made between al-Qaeda’s terroristic plots and the ordinary drug and street crimes that lead most prisoners into US jails, of course. Yet these men still managed to remind me somewhat of my own brothers—struggling to get a decent job, burdened by poor education, living among crime, drugs, and lots of dead ends. Despite all this, they were still trying to learn how to make money, find love, and become responsible parents and family members.

Isn’t that what good filmmaking does—open a window to a different perspective? I began to wonder how many of Smaker’s critics (of whatever background) had even bothered to watch her film, and how many were simply responding to the fact that she’s a white American woman who made a movie about Arab men. Not so long ago, one might have expected that the cancel-culture brigades coming after Smaker would be conservatives who were disgusted by any sensitive portrayal of accused terrorists. And so it says a lot about this moment we inhabit that the people who attacked the film view themselves as progressives.

The world of red-carpet film-festival luminaries presents as a haven for bold free-thinkers. But as numerous examples of this sort show, it’s instead become a world of Twitter-directed sheep operating on the basis of herd mentality. Following Sundance’s decision to dump Smaker, the South by Southwest festival rescinded its own invitation, which is when Disney jumped ship, along with the San Francisco Documentary Festival. The once-Oscar-eligible film was recently turned away by a small distributor, a company that’s otherwise known in the industry for taking risks.

Smaker has managed to get her film into two smaller film festivals since her cancellation. But it remains an uphill road, and it’s unclear how she’ll pay back her investors. Recently, Smaker told me, she went back to a theater in northern California where the film had already played once. This time, the owners turned her away. It’s a small family-owned movie house with four employees, and they felt they just couldn’t take the risk.

Even a filmmaker as famous as Ken Burns had to face the outrage mob last year, when PBS announced he was at work on a four-part docuseries about Muhammad Ali. The obligatory petition was assembled, this one with 140 signatures, and was sent off to the network, slamming the choice of Burns instead of a black storyteller. Burns acknowledged that some communities are underrepresented in the film industry. But he also pushed back, stating, “I don’t accept the idea that people of a particular background can tell certain stories about the past.” Unlike Smaker, Burns is a heavyweight, and so his film premiered in September.

This past April, Canadian film director Barry Avrich received a Canadian Screen Award for his documentary film Oscar Peterson: Black + White. At the award ceremony, he implicitly addressed the fact that he is a white man, while Peterson, the virtuoso jazz pianist and composer, was black: “There are so many black stories in Canada that need to be told. It doesn’t matter who tells them, we just need to tell them.”

Needless to say, Avrich was forced to apologize. What’s more, film-industry apparatchiks moved quickly to ensure that his kind of film doesn’t get funded again. Telefilm Canada, the federal government’s main film-finance outlet, hastily set up what has euphemistically been called an “Authentic Voices in Storytelling Subcommittee,” but which might more accurately be called a race-monitoring body whose members will ensure that films about Group X will be made by people from Group X.

Here in the United States, meanwhile, we don’t need that kind of oversight body—because private actors have shown themselves eager to police the issue of “authentic voices” on their own initiative. The UnRedacted is an example of the kind of high-quality consciousness-raising movie that will become collateral damage in the process. 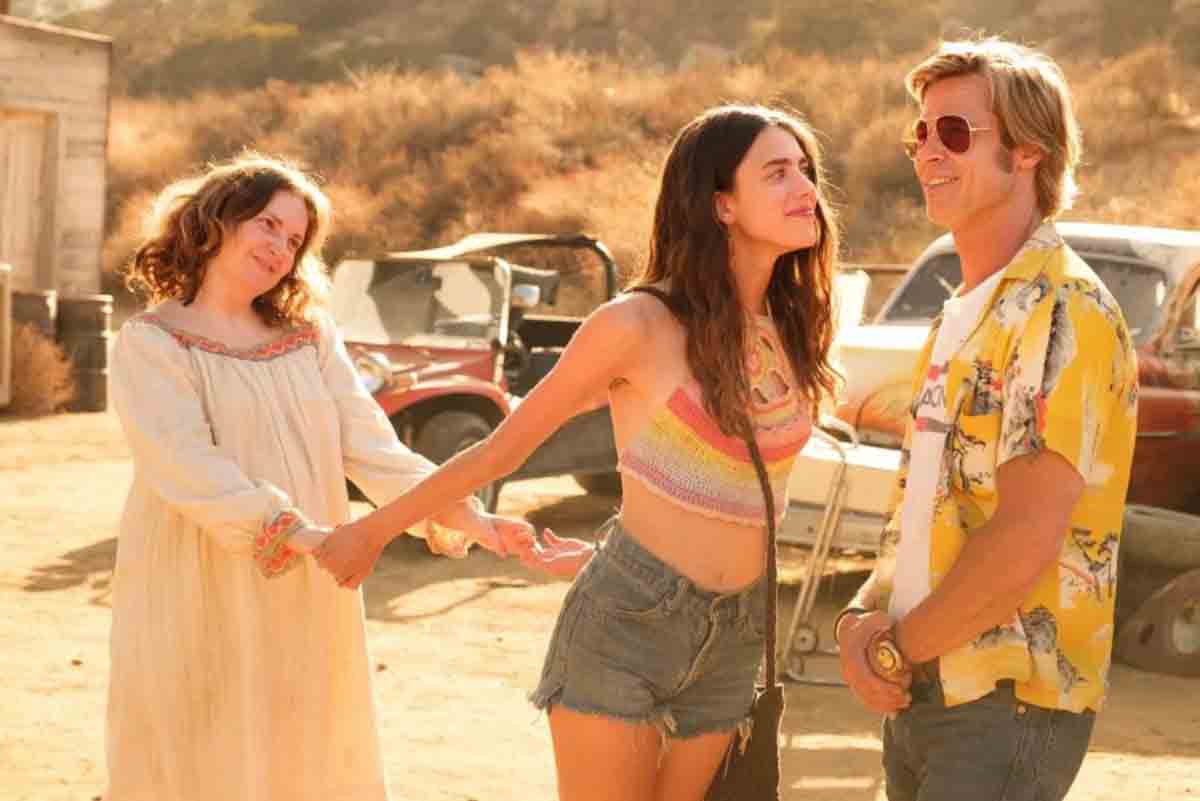