Review of Cancelling Comedians While the World Burns: A Critique of the Contemporary Left by Ben Burgis. Zero Books, 136 pages (May 2021). 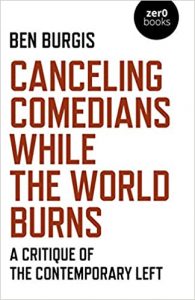 In 2013, British philosopher and cultural critic Mark Fisher found himself exhausted and losing interest in politics after spending too much time in the “miserable, dispiriting zone” of left-wing Twitter. Leftist politics, he wrote, had become a “vampires’ castle” the sinister denizens of which were driven not by thirst for the blood of the living but “a priest’s desire to excommunicate and condemn, an academic-pedant’s desire to be the first to be seen to spot a mistake, and a hipster’s desire to be one of the in-crowd” [emphasis in the original]. The vampires are supported by the institutions of capital, which found them useful for disrupting working-class solidarity. In Cancelling Comedians While the World Burns: A Critique of the Contemporary Left, Ben Burgis—a democratic socialist, occasional Quillette contributor, and the author of Give Them an Argument—follows Fisher into (or out of) the vampires’ castle, and quotes his essay frequently. Over 136 pages, Burgis sets out his diagnosis of the pathologies afflicting the modern online Left and proposes “a smarter, funnier and more strategic” kind of progressive politics.

In a chapter dealing with Antifa and the “pathologies of powerlessness,” Burgis warns that fistfights at rallies held by marginal white supremacist groups are no substitute for real political action and that such altercations risk bringing far-Right extremists attention and sympathy. He describes the assault on activist Andy Ngo as “morally and strategically indefensible.” In another chapter, he criticises “Tankies”—apologists for the totalitarian Communist regimes of the 20th century—for their “maddeningly counterproductive” approach of “insisting that the Soviet Union was actually good and blurring the distinction between the ‘socialism’ of militarized one-party states and the better world that might finally be within our reach.” He is sceptical of the utopian anarchists who believe it is possible to abolish the coercive institutions of the state, such as police and prisons, and those who complain about the behaviour of political institutions in which they refuse to participate.

But Burgis also worries that too many of those who share his goal of creating a fairer and more equitable society have given up on achieving practical change to pursue petty vendettas against other leftists. “Cancel culture” remains a contested term, and the chapter devoted to this phenomenon will probably attract the most discussion and controversy. Is someone cancelled if they leave social media following a pile-on, or are they simply running from other social media users exercising their right to free speech? And are they cancelled if they keep expressing opinions which make their employer uncomfortable and end up losing their job, or does their employer have a right to control its public image by limiting the opinions its employees can express out-of-hours? Burgis is particularly concerned with understanding the mindset of those who join online mobs denouncing people for real or perceived slights against marginalised groups. This focus makes sense, as Burgis is writing for the broader online Left, rather than decision-makers within the media, corporate sector, or academia. “Cancel culture,” he writes:

…refers to a cluster of cultural trends that have different levels of impact in different parts of our culture. It might be more precisely accurate to call it “denunciation culture” or “shaming culture” or some such thing, but the label is well-established—and let’s remember that the “cancelers” themselves were the ones who first started calling what they were doing “cancelling” people.

The title of this chapter is “No-one is ever really cancelled,” a claim made by critics of concerns about cancel culture who point out that most of those subjected to high-profile “cancellations” keep their platforms (or find new ones), their audiences, and their sources of income. Some emerge better off with a higher profile and more readers or viewers. Burgis has three responses to arguments like these.

First, he points out that cancellation does sometimes end careers and ruin lives, particularly for those who are not famous journalists or public figures, don’t have a big following, and depend on income from an employer. Besides, it is bizarre for a mob to insist that some innocuous comment is literal violence but that the torrents of abuse directed at the person who made it is part-and-parcel of public speech and accountability. Second, cancel culture can still be a problem even if it doesn’t lead to extreme consequences—a “Whites Only” sign, for example, is not the only evidence of racism. And third, the inefficiency of cancel culture is a problem in its own right—all this “huffing and puffing” makes the Left look unappealing and powerless, particularly when it is targeting other progressives. Burgis points to the examples of Natalie Wynn, better known the YouTuber ContraPoints, and Barbara Ehrenreich, both of whom are progressive figures and both of whom were subjected to unjustifiable Twitter mobbings. In a memorable phrase, he observes that the online Left doesn’t eat its children—it gnaws away at them.

Burgis is writing for his friends (and critics) on the Left, and so his chief concern is improving the strategy of those who, broadly speaking, share his political aims. But he isn’t afraid to tell them when he thinks their premises are also incoherent or simply wrong. For example, he wonders why ostensible advocates of rehabilitative justice tend to be most eager to condemn their opponents as beyond redemption, and notes that accusations of “unearned privilege” carry the (surely unintended) implication that freedom from oppression must somehow be earned. I suspect that many conservatives, liberals, and libertarians will find much to agree with, even if they are not the audience for whom this book has really been written. They will also find things to criticise, such as Burgis’s substantive political positions and relative priorities. Burgis also explores topics which the right-wing critics of cancel culture haven’t dug into, such as the link between an employee’s ability to speak outside the workplace and questions of workers’ rights and job security more broadly.

Burgis’s central thesis is correct. The pathologies he diagnoses—mob violence, apologia for oppressive anti-Western regimes, fanciful policy goals, and vicious social media campaigns against undeserving individuals—have all been a boon to conservative political parties. It is telling that CPAC 2021 adopted the slogan “America UnCancelled” rather than, say, “Against Universal Healthcare” or “Don’t Increase the Minimum Wage.” In fact, so obviously counterproductive is the Left’s conduct to achieving stated leftist goals that it’s surprising a book like this hasn’t emerged from the Left’s radical wing before now. Of course, that might be because criticising one’s own political tribe is risky. Witness, for example, the abuse heaped over David French, Liz Cheney, Mitt Romney, and other conservatives who have attacked the pathologies of the modern populist Right. Hopefully, Cancelling Comedians While the World Burns will receive a more sympathetic hearing, as it is an important, cogently-argued, and very readable book. Thoughtful, good-faith critiques are rare in contemporary politics, where success is more easily achieved by finding an audience and repeatedly telling it what it wants to hear.

At one point, Burgis quotes P.G. Wodehouse, but his book more obviously reminded me of Nancy Mitford’s comic novels. In The Pursuit of Love, the aristocratic wife of a Conservative MP leaves her loveless marriage and runs off with a Communist. She doesn’t mind being poor, and likes having a cause to fight for, but regrets that the parties she now attends now are less fun than the glittering soirées of London society. “Left-wing people are always sad because they mind dreadfully about their causes, and the causes are always going so badly” she laments. “The comrades are sweet,” she adds, “but they never chat, they make speeches all the time.” And what, she asks, is the point of sad parties? If nothing else, Burgis might help to make the online Left more fun.

Adam Wakeling is an Australian lawyer and historian. His most recent book is A House of Commons for a Den of Thieves: Australia’s Journey from Penal Colony to Democracy. You can follow him on Twitter @AdamMWakeling.

Photo by Michael Dziedzic on Unsplash