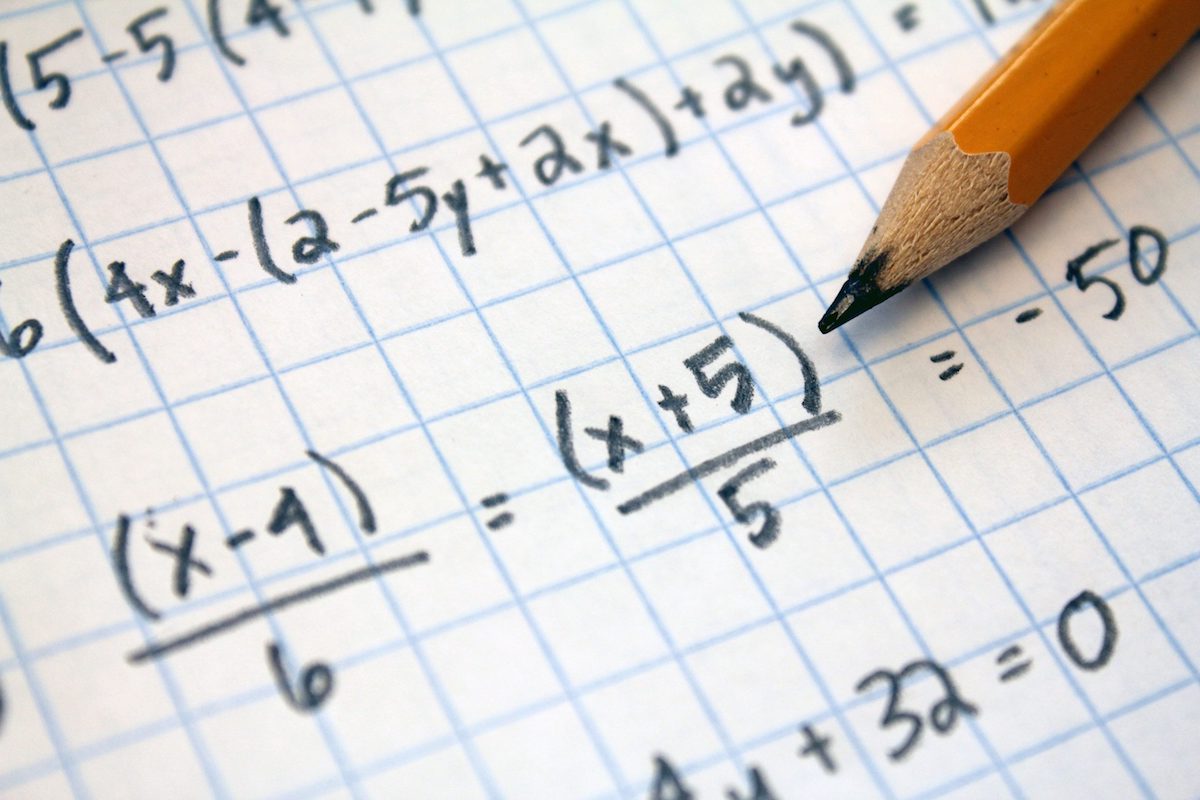 For decades, a conflict has been simmering in the elementary school classrooms of the English-speaking world. On one side are those who place mathematics understanding above all else and whose teaching methods involve asking students to figure out ways to solve authentic mathematics problems, focusing on the process while de-emphasizing the importance of obtaining correct answers. On the other side, often painted as stuffy traditionalists, are those who assert the importance of explicit teaching, practice, and memorization. Welcome to the math wars.

The origins of the math wars stretch back to the educational progressivists of the 19th century. Drawing on the writing of Jean-Jacques Rousseau, while reviling the strict discipline and recitation of the school house of the 1800s, they demanded a new, reformed mode of education. Learning should proceed through experience. After all, kids can learn lots of things through pure immersion, from recognizing individual faces, to speaking their mother tongue, navigating their local area or sharing resources with friends. Why should they not learn math the same way? Why can’t learning be more natural and joyful? The traditionalists, for their part, insisted that young children need to have math fully explained to them and that attention must be devoted to the task of memorizing “math facts” such as that 7 × 8 = 56.

Such debates continue today, with prominent educationalists still arguing against children “rote learning” multiplication facts. Add to this the evergreen motif of the patronizing and foolish mathematics professor who notes, as if nobody has ever thought of this before, that school math is different to what professional mathematicians do. Professional mathematicians formulate conjectures, waving their hands in the air while dancing around seminar rooms and writing funny symbols on whiteboards in spasms of inspiration. Why cannot school math be more like that? Instead of solving sets of routine problems, why not give students complex, real-world problems to solve so that they may also wave their hands and feel inspired?

The empirical evidence weighs heavily on one side of this debate. Despite concerted efforts, there is no body of properly controlled education research that demonstrates that relative novices learn math best through solving problems. In fact, the research suggests quite the reverse. This can be explained by a widely accepted fact of our mental architecture. “Working memory” is the term psychologists use to describe the thoughts we are consciously processing at any one time—the thoughts we are aware we are having. (It is sometimes referred to as “short-term memory” and contrasted with “long term memory.”) Our working memories, through which all new academic learning must pass, are extremely limited and so giving complex problems to children who have few existing mental resources to tackle them—such as a knowledge of multiplication facts stored in their long-term memories—simply overloads working memory, leading to frustration and little learning. Novices are quite different in this sense to experts. Experts have entire networks of interconnected concepts stored in their long-term memories they can wield at a problem with little effort—they have relevant knowledge to think with—and that’s why the best methods for teaching novices do not necessarily look like the methods used by professional mathematicians.

If this is true, how come we can learn so many things without explicit teaching, like our first language? Here, educational psychologist David Geary may be on to something. The capacities that we are able to learn through experience are perhaps ones we have evolved to learn. Humans have been speaking to each other for a long time and long enough for evolution to act on the process of children learning their mother tongue. In contrast, writing and symbolic math are only a few thousand years old at best and for much of that time have been the preserve of only a tiny proportion of the human population. There simply has not been sufficient time for us to evolve natural ways to learn to read or do math through immersion.

The evidence is now so strong for the efficacy of the explicit teaching of academic subjects that few serious educational psychologists proffer learning through problem solving as superior, with those inclined towards that view now retreating to the position of arguing that a little open-ended problem solving prior to explicit teaching may help children learn more than explicit teaching alone, a proposition that has been the subject of my own PhD research. For what it’s worth, I did not generate any evidence to support this idea.

So, will we see an end to the math war? Hardly. Educational psychologists do not have the last word on educational methods, an environment in which they are vastly outnumbered by other kinds of academics and bureaucrats who apply quite different standards of evidence. This conflict will keep going and it is instructive to understand why.

Those who support the learning-through-problems approach are always able to find a new angle. Sometimes it is technology. Once, it was the advent of the 21st century. In 2021, the strategy appears to be one based on social justice. You may think that the ends of social justice would be best served by teaching math in the most effective way possible, but that does not appear to be the case.

California’s new mathematics framework, for example, devotes two chapters to equity and engagement. In these chapters, we read that equitable and engaging teaching involves using open, engaging tasks, teaching towards social justice and inviting students’ questions and conjectures. The problems teachers pose to their students must be authentic:

An authentic problem, activity, or context is one in which students investigate or struggle with situations or questions about which they actually wonder. Lesson design should be built to elicit that wondering. In contrast, an activity is inauthentic if students recognize it as a straightforward practice of recently-learned techniques or procedures…

This approach is sold on the grounds that it honors the diverse lives and histories of students from a range of cultures and from historically marginalized groups. In reality, such tasks are likely to overload the working memory of children who have not yet mastered the relevant concepts, unless degraded to the point that they involve little, if any, math. But then, who wants to be “inauthentic”? That sounds bad.

Some take this approach even further, arguing for an antiracist approach to math education. A Pathway to Equitable Math Instruction: Dismantling Racism in Mathematics Instruction, is a document created by teachers and educationalists in California with funding from the Bill and Melinda Gates Foundation. Some of what it propounds does not sit within the frame of the traditional math teaching debate, such as the need to “center ethnomathematics.” Ethnomathematics is apparently the relationship between culture and mathematics and is a term that “requires a dynamic interpretation.” Centering ethnomathematics asks teachers to, “Identify and challenge the ways that math is used to uphold capitalist, imperialist, and racist views.” This looks like an attempt to politicize math and turn it into one of the humanities. If disadvantaged children receive this kind of teaching while their more advantaged peers learn actual math, any achievement gap can only widen.

Other antiracist approaches to math teaching outlined in the paper seem more aligned with the progressivist tradition, such as the directive to, “Teach mathematics through project-based learning and other engaging approaches.” Because, you know, reasons. And you’ll be a racist if you don’t.

There is an odd tension here. It’s not entirely clear whether the advocates of new math regard the subject as a legitimate form of enquiry that should be made more accessible to people of color or merely an expression of white supremacy that needs to be dismantled, decolonized, and turned into a social science. Recently, Twitter blew up with a discussion about whether 2 + 2 can equal 5. The central point of contention seems to be between math’s claim to universal truth and the kind of subjective, lived-experience approach embraced by many social justice movements. As A Pathway to Equitable Math Instruction explains, “The concept of mathematics being purely objective is unequivocally false, and teaching it is even much less so. [sic] Upholding the idea that there are always right and wrong answers perpetuate[s] objectivity as well as fear of open conflict.” Which is, of course, a profoundly silly take.

There are even those who think that objective, rational linear thinking—math—is a facet of “whiteness.” I view such an attitude as racist, not least because it discounts the work of non-white mathematicians as well as the obvious fact that math courses are often more popular with minority students than with white students. However, if you really did believe that math was somehow an expression of an oppressive white culture, why teach it at all? Or at least, why teach it well?

If that’s your attitude then ineffective teaching methods are not a bug but a feature.

Greg Ashman is a teacher and head of research at an independent school in Victoria, Australia and a PhD candidate. He is a podcaster and a prolific blogger and has written two books on teaching: The Truth about Teaching and The Power of Explicit Teaching and Direct Instruction. You can follow Greg on Twitter @greg_ashman.