In the last few decades, the proliferation of diversity, inclusivity, and equity literature throughout the medical profession has become institutionalized. Medical organizations such as the World Health Organization (WHO), the National Institute of Health (NIH), and the American College of Cardiology (ACC) have embraced this ideology and its accompanying bureaucracies and web-based material, and have called for cultural changes in some of our most important fields of study. Reforms are ostensibly intended to address healthcare disparities between groups, and new initiatives are frequently justified with reference to what the Sullivan Commission called the “ghosts of discrimination.” 1

The authors of reports like these will invariably go on to talk about implicit bias, the need for diversity in the healthcare workforce, and an examination of structural forces and power distributions that shape group disparities in health outcomes. In January 2020, the ACC published a cover story stating that healthcare group disparities and the lack of diversity in healthcare were a “national emergency” and strongly promoted the use of the Implicit Association Test (IAT).2 Even as late as April of this year, an issue of the Journal of the American Medical Association stated that “many fundamental determinants of health are far upstream of healthcare and are deeply rooted in the distribution of money and power, at local and national levels.”3

I don’t pretend to know the exact degree to which these statements are true (although there is almost certainly some truth to them), but I doubt many of the people who write this kind of thing have a specific answer either. The imbalance in conversations about medical disparities seems to result from an extremely narrow framing of the problem at hand—disparities exists, systemic racism and bias exist, examine the unequal distribution of “power,” and repeat. Clear answers to vexing questions about what causes group disparities to exist and persist will likely continue to evade the advocates of equity until a paradigm shift occurs in how we think about the problem.

The Center for Disease Control and Prevention (CDC) defines a “disparity” as the “quantity that separates a group from a reference point on a particular measure of health that is expressed in terms of a rate, proportion, mean, or some other quantitative measure.” The WHO has a more complex and qualitative definition and describes it as “differences in health which are not only unnecessary and avoidable but, in addition, are considered unfair and unjust.” Since it is unclear who would adjudicate something to be “unjust” and what constitutes something being “unfair,” the CDC definition will be used here given the comparative clarity of language.

Black and white patient differences in health-related outcomes are consistently used as the default framework in comparative medical literature, even though far greater and no less important disparities exist between other racial and ethnic groups. This remains the case even when non-Hispanic whites (NHW) are excluded from the data. For instance, the overall trend in black and white patient mortality rates related to heart failure between the years 2000 and 2014 were quite similar. But the rates for Hispanic patients were far lower than in either of these groups, and saw a persistent decline in the same timeframe even when adjusted for different age groups.4 Foreign-born Hispanics living in the US are a particularly healthy group, and often have several chronic disease states at lower rates than NHW patients, notwithstanding frequently lower socioeconomic status (SES) and education levels.5 These two examples represent “disparities,” but no rational person would claim that the US medical system is “Hispano-centric.” Nevertheless, the same analysis of black and white outcomes somehow confirms the healthcare system’s structural and systemic oppression of underrepresented minorities.

Restricting comparative analyses of healthcare disparities to blacks and whites leads researchers to claim that these gaps reflect an alarming lack of progress for minority groups. It also leads them to applaud fraudulent progress, despite clear evidence to the contrary. Trends in overall mortality reviewed by the CDC between the years 2000 and 2017 show larger decreases for black patients than for either white or Hispanic patients.6 If we were to restrict the analysis to blacks and whites, we might look at various points on the trend graph and conclude that something insidious is afoot because a disparity persists, even though the data reflect clear progress for both groups and blacks made more rapid progress in certain years.

Oddly, discussions about group disparities in the medical literature tend to lack analysis of which factors lead to a group flourishing. According to the CDC, overall trends show that lung cancer diagnoses in black men decreased by around 25 percent between 2007 and 2014. In a similar timeframe, lung cancer deaths also declined steeply.9 It is unsurprising to find that tobacco use among black men fell during that time and that large advances in treatment were made in targeting cancers of the lung.10 These causative factors improved outcomes regardless of a specifically targeted group. There does not seem to be any loosely defined structural barrier with respect to this particular disease, as is so often claimed in equity-focused literature. Behaviors and cultural factors across groups could certainly help to lower incidences of poor outcomes and could even help lower differences in group outcomes.

Disparities in the healthcare provider workforce are also analyzed and framed to support a narrative of structural oppression. A statement from the American Medical Association (AMA) in 2019 contained an odd omission. The AMA stated, “Census data shows that less than 10 percent of physicians are African Americans, Latinos, Native Americans and Alaska Natives combined.”11 But this ignores the plain fact that Asian Americans and other specific immigrant groups are thriving in medicine. Asians, like NHWs, are technically over-represented in professional designations like physician, physician assistant, and dentist compared to their overall US demographic share in data collected 2011–2015.12

Is the over-representation of Asian Americans “unjust” and should it be corrected simply because it represents a disparity? Recent court decisions on Harvard admission scores suggest that this idea is not as outlandish as it seems. Similarly, immigrant groups are very well represented in the medical profession. Data from 2017 show that large portions of many specialties are occupied by immigrant graduates, particularly nephrology, critical care, and especially geriatric medicine.13 Does a Nigerian physician practicing critical care medicine lower the hiring disparity between “white” and “black” physicians and correct some historical wrong, thereby shifting the scales of “power”? Apparently so, according to the illogical and inflexible doctrine of equity.

Amid the COVID-19 pandemic, these same frameworks are used to dissect important issues that could affect the medical care of our most vulnerable populations for years to come. In the June 2020 issue of the Journal of the American College of Cardiology, the authors of the guest editor’s page address the racial disparities in COVID-19 mortality.14 As usual, during the opening discussion of overall disparities in life expectancy, the authors focus strictly on gaps between NHW and African American (AA) patients. However, the article also includes the graphic below, which clearly shows (once again) a greater disparity in life expectancy between Hispanic patients and AAs (for both sexes) than between NHWs and AAs. Not a single sentence of discussion is devoted to this finding in the actual text of the article. To the contrary, the authors open their article with a quote from Alan R. Weil: “Nothing captures the nature of health inequities as clearly as the persistent life expectancy gap between whites and blacks.” 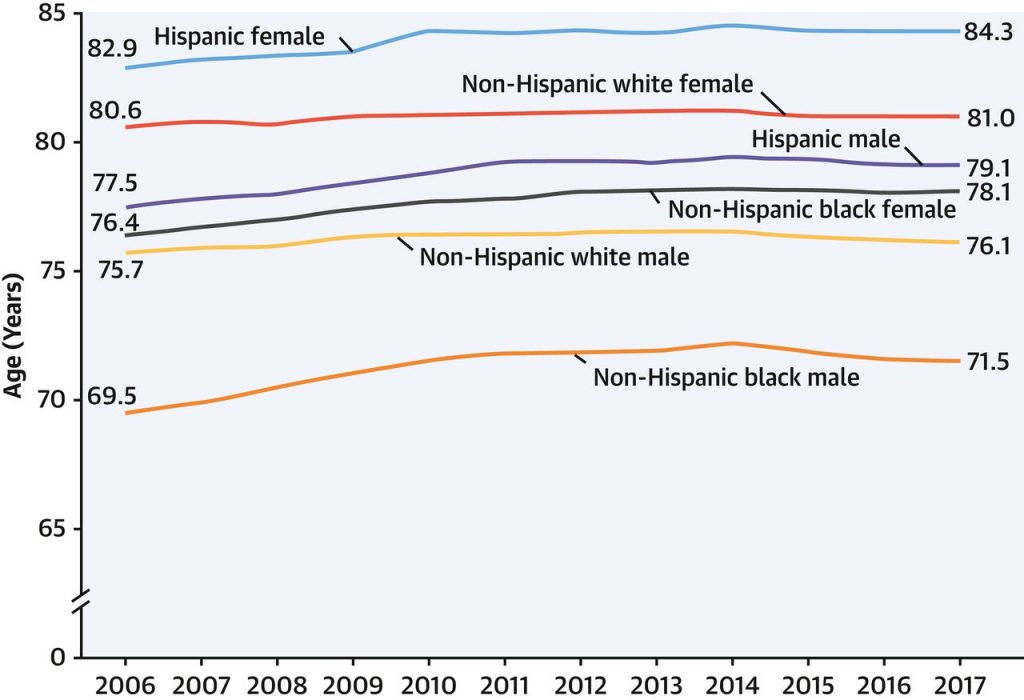 In the same article, the authors discuss an “adverse host environment,” and examine the ways in which “underlying comorbid conditions such as CVD [cardiovascular disease], hypertension, diabetes, obesity, and asthma are reflections of structural societal flaws beyond simply poor lifestyle choices…” They go on to explain that “People of color are neither genetically nor biologically predisposed to get COVID-19…” In the usual fashion, no firm evidence is provided for what constitutes these “societal flaws” beyond obvious health correlations to SES, and when the authors link lower rates of health insurance in minority communities to higher CVD risk, no citation is given. This is a somewhat egregious omission because multiple studies have shown that expansion of insurance is unlikely to alter racial healthcare disparities.15,16

It is particularly dismaying to see medical professionals make definitive claims about biology that are simply unknowable at this point in time, especially when some public health experts have argued that ethnic genetic variability in COVID-19 susceptibility is perfectly plausible. If true, this could lead to the development of separate risk stratification pathways which could save more lives, so it is important that this avenue of inquiry remains open for discussion. We already have data showing that possible average differences between East Asians and white patients could lead to different cardiovascular outcomes, and it seems strange that additional average differences in ancestry could not at least partially explain group outcomes.17

The logical fallacies and delimited mindset described above are all well-represented by an article in the May 2020 issue of the New England Journal of Medicine.18 While the authors recapitulate correlations between race and SES, they seem to be much more concerned with avoiding the possibility of offense than producing verifiable findings in relation to differences in racial outcomes for COVID-19 mortality. Much anxious mention is made of words like “stigma,” “stereotype,” and “marginalized,” but although the authors seem to be genuinely concerned about contextualizing data, they once again make definitive claims dismissing biological or behavioral differences between groups as even a partial causative factor. They conclude: “In sum, to mitigate myths of racial biology, behavioral explanations predicated on racial stereotypes, and territorial stigmatization, COVID-19 disparities should be situated in the context of material resource deprivation caused by low SES, chronic stress brought on by racial discrimination, or place-based risk.”19

Every problem exists within a frame of mind that determines its available analysis and solutions. If this frame is narrowed, no matter how noble or ideological the intention, it is likely that the answers produced will be at variance with reality. In most of the contemporary medical literature dealing with health disparities, the answer to the problem is predetermined and it is invariably some combination of discrimination, privilege, bias, and power structures. Seldom is evidence in support of these claims provided—the burden of proof is passed instead to those who wish to refute them. The indirect effect of this may be to lead future generations of healthcare professionals to see oppression where it does not exist, to promote needless intergroup antagonism, and to misallocate medical risk based on poorly developed medical philosophy and data. If the goal is to correct health disparities (as it ought to be), analysis of those disparities should be held to the same scientific standards as medical interventions, not least because they are of equal importance.

True progress in medicine can only be accomplished when we maintain a consistent standard of scientific excellence and honest inquiry. Masochistically engaging in the flagellation of the medical profession and stating we are “failing” certain communities has done little to actually help those in need.

Zachary Robert Caverley is a physician assistant specializing in cardiology and working in rural health clinics throughout the north-west coast.