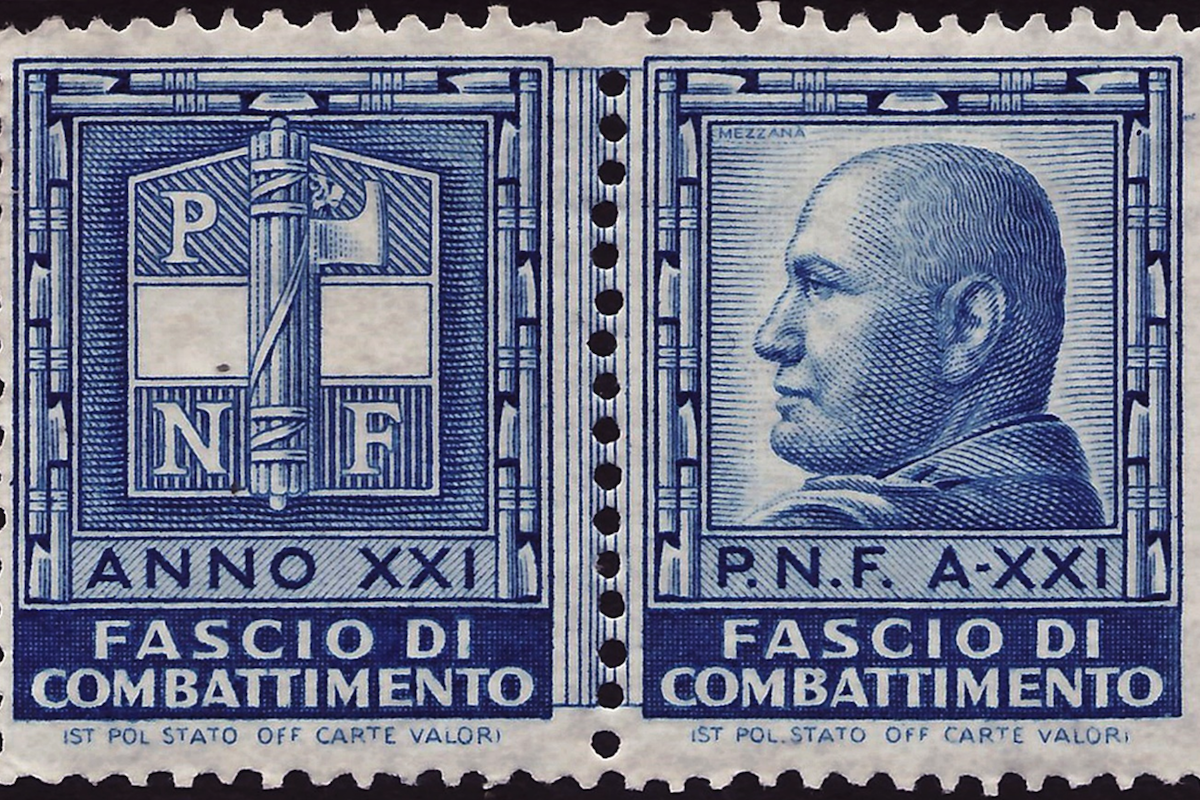 Some historical movements fade into oblivion. (Meet any physiocrats lately?) But not fascism. Despite the fiery demise of the Nazi regime 75 years ago this month, the idea of fascism has retained its power to arouse fear and contempt—even in countries where it poses no realistic threat to the prevailing liberal democratic order. In the realm of US politics, the term has become common currency among detractors of Donald Trump—while on the other side of the spectrum, conservatives use it as a casual slur to attack COVID-19 lockdown policies they deem misguided. When protestors used the f-word to describe New Jersey’s pandemic response (on Victory in Europe Day, or VE Day, no less), state governor Phil Murphy properly replied that the malapropism created “a disgusting false equivalence.”

Books warning of “the new fascism” have become a cottage industry among academics. But at least one author, Dr. Paul E. Gottfried, professor emeritus of humanities at Elizabethtown College and editor of Chronicles magazine, takes a more historically informed view. He’s currently writing a book about the anti-fascist movement, a sequel of sorts to his 2016 book, Fascism: The Career of a Concept, in which he described how the term had mutated since Benito Mussolini founded the Fasci Italiani di Combattimento over a century ago.

Although Gottfried believes the term is now abused more by the Left than the Right, historical accuracy and scholarly integrity often fall to the wayside on both sides of the political spectrum. “As a historic phenomenon,” he wrote in Career of a Concept, “fascism has nothing to do with advocating an isolationist foreign policy, trying to restrict Third World immigration, or favoring significant income redistribution in order to achieve greater social equality.” Like most of us, he wants the term retired, at least as a shorthand slur “hurled at anyone who holds what are now unpopular opinions.”

Even in the 1940s, at a time when genuinely fascist dictatorships threatened to extinguish freedom over much of the world’s surface, George Orwell noted that misuse of the term had rendered it “entirely meaningless.” Decades later, American journalist Tom Wolfe would note the “morbid tendency” of his colleagues to apply the word to everything from Christian revivalist movements to hippies.

Among major ideological movements, fascism is unmatched in regard to the speed and decisiveness with which it was relegated to history’s ideological trash bin. And as historian James D. Forman has noted, this fact may help explain why its intellectual specter has long outlasted its influence as a mainstream political movement. “Both Fascist and National Socialist movements were defeated in [dramatic] circumstances which make an unprejudiced approach [regarding other threats] difficult,” he wrote. The triumph over Nazi Germany, in particular, marked such a profound moral victory that it “le[ft] little attention for similar phenomena,” such as totalitarian communism. While communism evolved in the Soviet Union, China and their various client states, assuming different forms that ranged from Stalinist repression to mere socialism, Nazi fascism was frozen in amber the moment World War II was won.

Moreover, Forman notes, there is no “source book” for fascism. Communists had Das Kapital, The Communist Manifesto and other seminal works, which helped set forth the theoretical goals of their movement even if the reality was one of gulags and show trials. But fascism really only had Mein Kampf, a turgid, paranoid rant that “is not so much a definition [of fascism] as a projection of what Hitler intended to do.”

Even in the interwar years, the definition of “fascist” was surprisingly vague. The various national movements that self-identified as fascist all could be said to have been authoritarian, nationalistic, anti-individualistic, and encouraging (to various degrees) of commercial enterprise to meet the needs of the state. But from there, things get muddled, including on such basic issues as the role of the proletariat (remember that Nationalsozialistische Deutsche Arbeiterpartei translated to National Socialist German Workers’ Party) and officially sanctioned forms of Christian worship. So called “clerical fascism,” sometimes described as a variant of Catholic corporatism, found support in Portugal, Spain, and Austria (led by Engelbert Dollfuss, who died resisting Hitler) and Belgium’s Rexistes; but not in Italy, where members of the Partito Nazionale Fascista often adopted forms of neo-paganism.

And if the definition of fascism was vague, so, too, by necessity, was the definition of anti-fascism. Stalin certainly found it easy enough to blame his problems on the machinations of “fascist power” and “fascist lackeys.” The 1934 assassination of politburo member Sergei Kirov, in particular, was blamed on a “fascist plot” purportedly involving dozens of conspirators, which formed part of Stalin’s pretext for sending millions to the Gulags and killing an estimated 750,000 in the Great Terror. Even members of the Polish Underground who rose up against the Germans in Warsaw toward the end of the war were (absurdly) labelled “Polish fascists” by Soviet propagandists.

Stalin publicly misused the term so often, in fact, that Princeton history professor Stephen Kotkin has suggested he lacked a fundamental understanding of the word’s meaning. But Stalin was a voracious reader, and it seems more likely that the Soviet leader knew quite well that he was mangling the term, but continued anyway as he found it to be an expedient catch-all for his demagoguery.

According to Norman Davies, history professor at University College London, a well-founded fear of fascism was central to Soviet foreign policy during the 1930s. At the League of Nations, Soviet representatives pushed for a policy of collective security based on the then-new construct of antifascism. But it was hardly “a coherent political ideology,” Davies notes. “In terms of ideas, it was an empty vessel, [giving] the false impression that principled democrats believing in the rule of law and freedom of speech could rub fine with the dictators of the proletariat.” Unfortunately, “Western intellectuals fell for the ploy en masse.”

Once the war ended, social theorists of the Frankfurt School, many of them Europeans who’d immigrated to the United States, injected their fear of the fascist threat into emerging theories of mass communications and propaganda. Prepared in the United States by Theodor Adorno and others, the book series Studies in Prejudice (which famously contained Adorno’s landmark study, The Authoritarian Personality) provided an updated form of antifascism that was disconnected from its Marxist roots. As these authors saw it, the fascist threat still lingered in an abstract form, as evidenced by American resistance to democratic socialism and the propagandistic jingoism peddled by Hollywood and mass consumer culture more generally. According to Gottfried, Adorno used questionable methods to trace correlations between “those who did not share [his] socialist sentiments and those who wished to destroy Jews or degrade women or blacks.”

“Fighting fascism” always remained an attractive draw for the post-war American left, Wolfe wrote in a 2000 Harper’s essay, “In The Land Of The Rococo Marxists,” especially since the Left’s American cadres were never “catechism-drilled Marxists,” even if they remained “enveloped in a heavy Marxist mist.” Anti-fascism, he wrote, “became a universal ray gun, good for zapping anybody, anywhere, from up here… on the intellectuals’ Everest of Indignation.”

Gottfried notes that the target of this ray gun hasn’t just been those who oppose socialism and its variants, but, specifically, “all forms of Western or European identitarian politics, be it national, ethnic, or religious, and an expression of solidarity with an idealized world community.” Communism purported to be a universalizing creed, while fascism always manifested itself as nationalistic. In practice, there was little difference, since all totalitarian communist regimes have also created nationalistic cults. Nevertheless, it became a tenet of anti-fascism that nationalists often are presumptive fascists in disguise.

Even today, this kind of reductionist political attack remains popular, and not just among Antifa street marchers. The United States, like many other countries, does contain a genuinely radicalized right-wing political fringe, including some who call themselves fascist. However, these are not influential political actors. Yet that did not stop then-presidential candidate Beto O’Rourke from assailing Trump in October by declaring, “Outside of the Third Reich, give me another example of a Western leader who has called people of one faith inherently defective or dangerous or disqualified from being successful in that country.” Julian Castro, another 2019-era Democratic presidential candidate, declared that Trump advisor Stephen Miller is a “neo-Nazi.” Last June, Rep. Alexandria Ocasio-Cortez called migrant detention centers on the Mexican border “concentration camps,” language clearly intended to signal moral equivalence with the Nazi holocaust. Six weeks later, at a sentencing hearing for two Proud Boys who got into a street fight with Antifa extremists, New York Supreme Court Judge Mark Dwyer stated, “I know enough about history to know what happened in Europe in the ’30s when political street brawls were allowed to go ahead… We don’t want that to happen in New York.”

While judges and lawmakers may claim to be speaking metaphorically or speculatively, some of those listening seem to be taking the comparisons literally. Before he shot and killed nine victims in Dayton, Ohio, last year, 24-year-old Antifa supporter Connor Betts frequently decried political opponents as “Nazi” on Twitter, declaring, ominously, “Nazis deserve death and nothing else.”

The destruction of fascism in Europe 75 years ago should be remembered as a great victory. And fascism itself should be reviled—but not in a way that inflates false fears or smears conservatism, nationalism, and even patriotism as offshoots of Nazi ideology. The millions who died fighting actual fascism did so to preserve freedom of conscience and national self-determination. And their legacy should not be distorted by those who would seek to dress every political opponent up in Death’s Head cap badges and calf-high jackboots.

Bradford H. B. is an American writer and business owner.

Featured image: Stamp of charges and dues of the Fascist Party of Italy, founded in 1921.