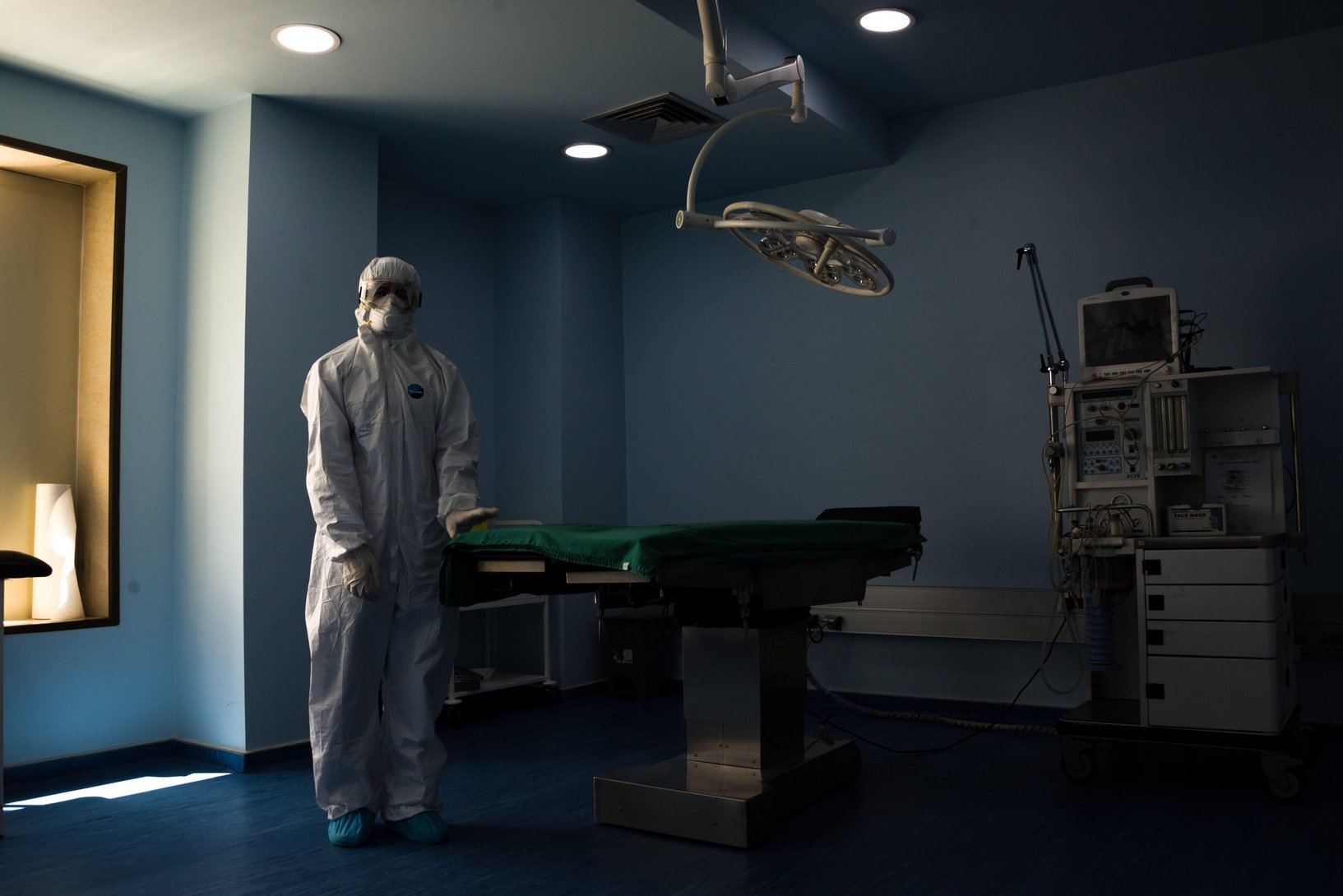 I had been out of clinical medicine for a couple of years but felt a calling to return to the intensive care unit (ICU) to help my local area in London cope with the additional burden presented by this pandemic. Like everyone, I had read that the National Health Service (NHS) needed a dramatic increase in capacity to save lives—beds, ventilators, and staff. I was a little scared. Would there be enough Personal Protective Equipment (PPE)? Would my new colleagues accept me? Would I survive, or become another face on the news of a frontline staff member who had succumbed to the virus? I felt a little deflated when I contacted four local London hospitals to offer my help, my time, possibly my good health, only to have my emails either not replied to or batted around various HR departments. Hospital administrators struggled to process a volunteer who was an ex-intensive care doctor with 11 years’ experience. Classic NHS, I thought. The national institution that all we Brits know: at times loved, at times hated, full of wonderful people, but not always well-run. This was part of the reason I had left my UK clinical work to become a doctor in the global pharmaceutical industry.

I cycled up to the hospital on an unseasonally warm day before the Easter weekend. My first day back. What immediately struck me was that the corridors of the old Victorian hospital were empty. Where was everybody? Where was the pandemic? There seemed to be no patients, no staff, no one about at all. Had this all been media hype? I expected the hospital to be a hive of bustle. The front line. This was where the rubber met the road of tackling COVID-19, I thought.

I was right, but not in the way I expected. COVID-19 had generated huge amounts of demand in the ICU and acute ward but the rest of the hospital had effectively shut down. Hundreds of patients had been discharged from their hospital beds in anticipation of the pandemic. Patients were now not presenting to hospital for routine medical issues. Heart attacks, serious infections, strokes—where were these patients? Perhaps, tragically, they were following too closely the UK government’s advice to “Stay Home. Protect the NHS. Save Lives.” Effective, clear messaging: the Prime Minister Boris Johnson and his chief advisor Dominic Cummings are renowned for it. So effective that even our four-year-old repeats it. Will more patients lose their lives for this reason than the lives saved from the lockdown? We know from early Italian reports that their cardiac centres had not had the throughput they usually experience during the COVID-19 peak. Heart attack patients had been staying home. Perhaps it was not communicated clearly enough that people should still seek medical attention if they feel they need it: COVID-19 does not mean suffer in silence.

After a short local induction, I was back on the front line. Very quickly I got a clear picture of the situation. The ICU, which usually had capacity for 10 ventilated patients, had nearly 30 ventilated patients following the requisition of adjacent clinical wards. Theatres and theatre recovery had also been shut down for normal business and were being used as an extension of the ICU. They were stretched, but just about coping, I thought. Doctors and nurses from all around the hospital had been redeployed to the ICU.

All the patients on the ICU were COVID-19 patients, all having followed a very similar clinical trajectory: a period of fevers and feeling unwell followed by worsening breathlessness. The unlucky few, after a period of oxygen therapy on the ward, would become too tired to maintain the additional breathing requirements of COVID-19 to maintain normal oxygen levels in the blood. For these patients, doctors would be required to make a decision—would they benefit from being sedated, intubated, and having their breathing performed by a ventilator on the ICU? This is not such an easy decision. If a patient is selected for this type of medical intervention when they are too frail, they would likely be consigned to a prolonged, uncomfortable, and undignified death in the intensive care unit. Surviving critical illness requires a degree of fitness and conditioning—for patients who don’t have this, intensive care therapy can be unnecessarily distressing and ultimately futile. It is thus crucial that the right patients are chosen for the ICU.

In addition, doctors must consider the challenging, but very real situation of stewarding limited capacity in the face of additional demand: giving an ICU bed to someone today who may not benefit, but who will restrict access for a patient tomorrow that might. These situations are perpetually challenging and put two of the fundamental principles of medical ethics at odds: autonomy and distributive justice. For example, a clinician must uphold the wishes and rights of the individual, while also making sure that the broader population can access the same treatment if they need it. In an ideal world this would not be a problem as we would have unlimited medical resources. But reality, particularly in the NHS, which immediately prior to COVID-19 had one of the lowest numbers of ICU beds per capita in the developed world, dictates that rationing decisions must be made. This is even more acute when demand is as high as it is in the COVID-19 crisis.

Much has been made in the British media of the need for additional ventilators. Mechanical ventilation was invented in the 1920s during the polio pandemic. The ‘Iron Lung’ was a machine that supported the work of breathing to patients who were unable to breathe for themselves via an iron cylinder that contained a polio patient’s body, but not their head. Cyclical negative and positive air pressure in the cylinder generated a gradient to suck air into, and then force air out of, a patient’s lungs. Ventilators are now much more advanced, driving air in and out of a patient’s diseased lungs via a plastic tube that is inserted through the vocal cords into the trachea.

This technological advancement is crucial, as the damage COVID-19 can do to a patient’s lungs is considerable. The lungs of these patients become infiltrated with fluid and scar tissue, limiting the normal function of gaseous exchange while becoming very stiff. As a consequence, many of these patients require ventilators to generate high inflation pressures to fill the lungs modestly. To further manage this problem COVID-19 teams are using a strategy of routinely “proning” patients, a practice used commonly in the ICU I am working in, as well as in others. Proning patients, or turning them on their front, can help redirect oxygen to healthier parts of the lungs and give damaged areas a chance to rest and recover. This is a therapeutic strategy well known to ICU doctors but infrequently used and certainly not deployed on the scale that it is being used now. Proning patients carries risks: It requires a team of seven people to turn the patient, taking great care not to pull out or dislodge any lines or tubes that are providing life-sustaining treatments. Humans are not used to lying face down for 16 hours and thus great care must be taken to protect the body from pressure injuries to the face and other parts of the body.

But the lack of ventilators hasn’t been as much of a concern as many expected. Hospitals can access a lot of ventilators across ICUs and operating theatres, plus simpler ventilators for transporting patients or providing non-invasive breathing support on the wards. More profound shortfalls in capacity during the crisis appear to be manifesting in two forms. The first is ICU nurses, who are simultaneously caring for two or three patients when they would normally only be looking after one. ICU nurses are some of the true heroes of this pandemic.

The second shortage is dialysis machines. These machines are used for patients who experience kidney failure. COVID-19 can trigger an inflammatory process, or ‘cytokine storm’, seven to 10 days into the infection. This can lead to kidney failure—both kidneys cease to perform their usual function of cleaning the blood and eliminating waste products via the urine. As a consequence, many COVID-19 patients require dialysis support, but there are profound shortages of these machines given the additional demand. Dialysis machines are therefore being rotated around COVID-19 patients who require them, rather than being used continuously until the kidneys recover, which is normal practice. This means patients with COVID-19 requiring dialysis are having to endure periods of time where they are not dialysed. Whether this will affect outcomes for these patients has yet to be seen. For patients who become critically ill with COVID-19, the challenges are very great—multiple organs are failing simultaneously requiring many therapies, both pharmacological and mechanical. This produces a complex illness where it is sometimes difficult to work out whether a particularly intervention has helped or harmed a patient.

Most heart-breakingly, families of these seriously ill patients are not allowed to the bedsides of their loved ones to prevent further spread of the virus. As a result, doctors give daily updates to the families regarding the clinical situation by telephone. I have felt the anticipation down the line immediately after I lead with, “Hi this is George, one of the ICU doctors. Can I update you about how your dad is getting on?” Families must wonder if this is the phone call they most dread. Sometimes it is. Our unit is able to provide video calls to families so they can see their loved ones in their final moments, before the machines are turned off, and the patient is allowed to pass away peacefully without the machines and monitors and their accompanying noises. These calls are heart-wrenching, as you might expect. Many of the victims are young—in their 40s or 50s. The doctors and nurses, in full PPE, emotionally hold the hands of these patients as the heart makes its final beat. The commitment and compassion of these frontline staff is overwhelming.

What next? Will there be a second peak if lockdown restrictions are eased in the coming months? What will happen when lockdown ends? Will the clinical trials yield an effective therapy or vaccine? This illness is like no other medics have experienced—we are learning on the hoof. How many will die? How many clinical staff will die? Time will tell, but one thing we have learnt is that there is no shortage of humanity on the wards and ICUs of the UK and beyond.

George Godfrey is an ICU doctor at a London hospital.