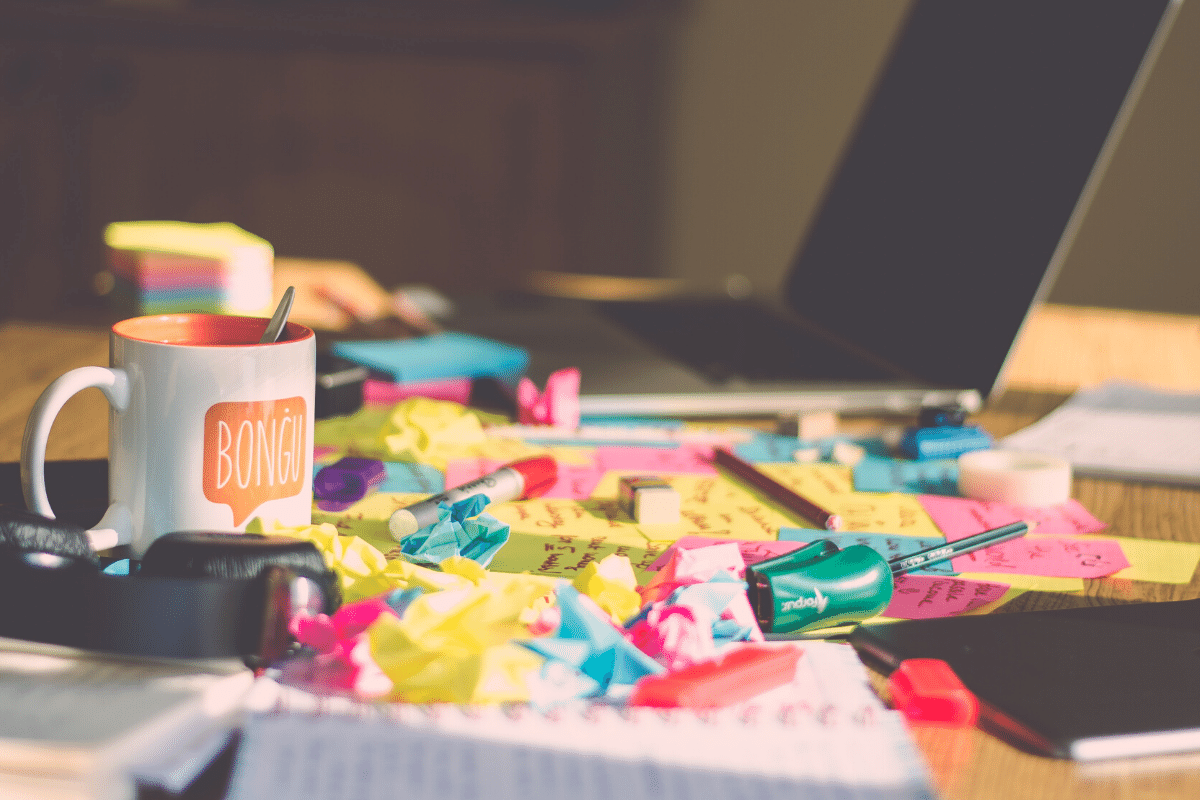 My artistic skills are nil, but my lettering is solid. So when I doodled a cartoon hand around an erect cartoon penis, it was the word inside the dick I was most proud of: DIVERSITY.

As team members ran through their collective to-do list—tear down the patriarchy, tear down capitalism, tear down oppression—they shared their favorite Viennese hotels, yoga retreats and keto-friendly recipes (#OMG #SOGOOD). This was the nature of the quarterly meetings. I smiled through the video feed, nodding, adding little curlies to my diversity dick off-screen while jotting down a secret affirmation to myself:

Do NOT let them add you in WhatsApp.

I was their writer. The doodles were a cry for help. I’d hit the wall.

Having worked in advertising agencies for more than 20 years, it’s always been my job to write in a way that sells. Products, services, brands. But over the last decade, I’ve found myself in the pay of a series of wokepreneurs.

Thanks to word-of-mouth, I unwittingly specialized as the equity industry ballooned. I polished one social-justice enterprise—consultants who train organizations to “embrace the change”—until it shone. Then I was hired by another, and another, to the point where I was in demand.

“I had my doubts about hiring her,” said one client, explaining my presence as he introduced me to his group. “I mean, why would I want some white woman as our voice, even if nobody sees her?”

Because I’m one of the most experienced writers in the country doing this work…? I thought to myself. But I said nothing. I was doodling a dick.

As with old-timey mobsters promising protection to mom-and-pop corner stores, the presentations, websites and proposals I created for equity consultants wrapped a threat inside a promise:

It’s a shakedown, and some of the biggest and most prestigious organizations in the world are signing up. The people who do this work are kind and intelligent people. So are the people who buy it. But that almost makes it worse. It’s all about the money, a circle jerk just as corrupt, disingenuous and ego-riddled as the capitalist and institutional behemoths getting hustled. Except no corporation or government—in the West, anyway—perches atop its hoard while also claiming absolute moral authority and demonizing anyone who questions it.

In college, we used to watch The Smurfs, and take a swig whenever we heard ‘smurf’ used as verb, noun or adjective. I’d have gotten drunk just as smurfin’ fast if I’d hauled on a bottle every time an equity consultant used the word ‘folks’ (spelled with an x for inclusivity) to enforce yet another radical over-correction and have it feel less threatening. Other popular favorites: “Do better” (as a critique of others’ insufficiently activist outlook), “Be in the circle” (an affectation of Indigenous rituals), “Shift the power,” “Stay in relationship to the work,” and the archvillain: “whiteness.”

In the past few years, the phenomenon has escalated dramatically. I began to pull further and further away from what had started to feel like a soft-edged cult complete with chants, conspiracies and near-complete homogeneity of speech. Every client echoed the last, parroting rightspeak.

Trying to sort out the increasing conflict within, I looked up the word profiteer and found everything I’d ever muttered to myself, reeling as I woke up from woke. Speculator; exploiter; charlatan. Were they the propagandists—the con artists, panderers, demagogues—or was I?

I made it slick. I made it plausible. It was my job to turn a regressive sow’s ear into a progressive silk purse.

I’ve had clients from around the globe. I have been the behind-the-scenes voice for everything from energy and telecoms to non-profits feeding the hungry. But when it came to writing for the wokepreneurs, I felt like an atheist hired to write sermons for a fundamentalist church. It’s one thing to write ad copy urging people to drink Pepsi instead of Coke. That’s benign. But I was being paid to mangle language, gaslight the public, and undo the fabric of things I believe in—free speech, open discourse, and the toxicity of narcissism as a cultural north star. That’s malignant.

That I somehow wound up specializing in the cash cow of social justice is a bewildering fluke. How did I wind up here, I wondered? How did they?

“We are not in the world we want yet,” one client told me, disapproving of a “problematic” turnout to an equity training event they had staged. We were in a majority-white, majority-rural state—to her, an inevitable harbor of systemic racism. Of the 200 people in the room, only four were black. Two others might have been Indigenous. One attendee spoke with an accent that seemed faintly Middle Eastern. There were a few Asians in the mix, but their presence didn’t add to this client’s particular narrative. They just never came up. I’d already clocked all the ones they’d want me to showcase, knowing what my marching orders would be.

“You know what I’m going to ask, right?” my client whispered. “Please make this room look diverse, or else we can’t use it.”

Most attendees, despite being overwhelmingly white, seemed energetic and eager to participate in the training. But that was not enough. I passed the instruction to the photographer to shadow the “desirable” people of color, only some of whom were smiling and engaged. The photographer lurked obediently in their periphery. The others were bored and expressionless, which makes sense: Like me, they were regular people doing their jobs. Someone had made them come to equity training. They did not exist to be diversity models. And there we were, salivating over their presumed oppression like some sort of delicacy.

Professional “change-makers” are so fixated on virtue signaling, the simple act of choosing an idea, interview, feature story, photo, or retweet is a minefield. For another client, I pitched that we highlight the work of a woman who does event facilitation on environmental issues. “Hmmm,” said the client, who happened to be white. “I dunno. She’s just… way too white.”

No one in our entire state could possibly be more correctly oriented than this environmentalist. She wears vegan shoes and stands in the cold for reparations. Venting, I described her to my partner (the recipient of all my eye-rolling GIFs) as: No way that woman doesn’t do a land acknowledgement before she burps. But her deeply earnest commitment to fighting injustice was undeserving of credit because she has long blonde hair.

It should be noted that this environmentalist also happens to be a sweet, congenial and wholly spirit-forward human who, to this day, is unaware that a nod of recognition for her lifelong efforts had been pre-emptively dissolved by the stomach acid of her own tribe.

For wokepreneurs, the more boxes ticked, the better—even when it’s fake. One client, a political candidate who’d recently moved to a rural area, bussed in a carload of hijab-wearing women from the closest city so the small town would look “less white,” and to lend urgency to her insistence that its citizens be “more race-aware.” The candidate was not successful in her bid to win the county’s seat, losing the election by a wide margin. Her campaign had profoundly misread and scolded the very people she had hoped to represent.

The movement—progressivism, equity, wokeness—protects itself from examination by pointing at anyone who does not uncritically accede to its doctrines as evidence of the problem it claims to be solving. As a former progressive, this makes me angry. I first hit peak-intersectionalism thanks to the revelations of my young lesbian niece, including gender ideology’s effect on her socialization and mental health. After years of witnessing the movement from the inside, I began seeking nuance, as I should have done from the start.

I haven’t been able to say any of this publicly, which is why I’ve written this piece under a pseudonym. If I spoke out about any of this, I’d jeopardize my career. So I am quietly and selectively withdrawing my talent. I am a conscientious objector.

Writing is deeply personal work, even when it’s for corporations. Most of my clients are genuinely innovative teams making great experiences and products. I shape and conceive the story, which comes to define their brand. It is my job to persuade. And I can no longer work for people who believe and teach that immutable characteristics make people either magically wise and deserving of regard, or irrevocably suspect and deserving of scorn. And that optics matter more than merit, character or good intentions.

It’s almost impossible for anyone to feel valued from inside the equity hustle, or to trust its means or its ends. White people—especially straight “cis” men—are required to perform contrition, self-censorship and self-deprecation. Everyone else is tokenized and graded according to their intersectional score first, and the value of their contribution second. It should make all of us step back, skeptical. But it doesn’t. Not when this much money is up for grabs.

I haven’t just quit the Left. I’ve quit the wokepreneurs. I love what I do too much to spend client meetings doodling contemptuous dicks. And so I won’t be cashing any more checks signed by the real-life likes of Titania McGrath.

Give me anything else to write about.

Flossing: It’s over-rated.
Cigarettes: They make you sexy, you know.
Fracking: Lighting the water from your kitchen faucet on fire is neat.

Anything but social justice.

Janet Mackay is the pen name of a business writer.