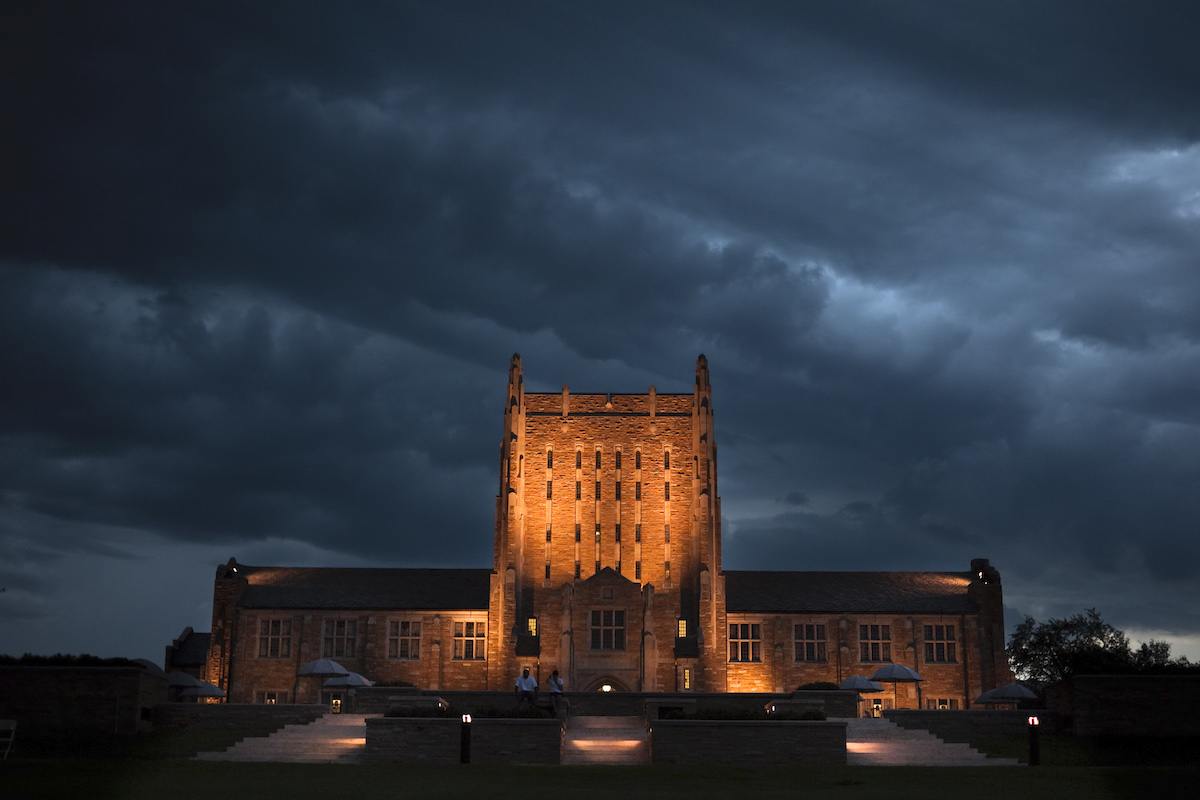 As the Chronicle of Higher Education recently reported, the University of Tulsa has been bitterly divided by True Commitment, an academic restructuring that guts the liberal arts and eliminates departments in favor of divisions. The blueprint for the restructuring was laid out in a strategic plan formulated by President Gerard Clancy after he took office in 2016. Trustees and administrators claim the plan’s narrow emphasis on technical and vocational training—a strategy other institutions are adopting as the higher education bubble deflates—will allow TU, until 2016 a top-100 national research university, to remain relevant in the 21st century. Faculty believe the plan’s impoverished view of the human person and historical and cultural obliviousness show that liberal education is indispensable if freedom and human dignity are to survive.

The plan’s introduction, “Jobs as Central to Life,” starts by praising the liberal arts. But like Hamlet’s insincere Player Queen, it doth protest too much. A “point of pride,” the plan declares, is that TU professors teach students “how to solve complex problems,” and thus “move well past teaching a student what to think.” This fundamentally misrepresents what a university does. Teaching students what to think is indoctrination, not education. The Latin educere means “to lead out”—in Plato’s image, out of the cave of unexamined life, where ignorance enslaves human beings to conventional prejudices and manipulative opinion-makers, and into the daylight of truth. Problem-solving capability is furthermore entirely compatible with indoctrination, which is itself a kind of technical expertise. The only proven defense against mental and spiritual tyranny is liberal education, which looks to the whole and cultivates one’s capacity to form, as John Henry Newman put it in The Idea of a University, an “instinctive just estimate of things as they pass before us.”

The liberal arts make one more appearance on the following page:

As we look to the future of The University of Tulsa and our new Strategic Plan, among our many duties will be a commitment to prepare our staff, faculty and graduates for high-quality jobs and in doing so help them write great stores [sic] of their lives. These stories will inevitably entail jobs that serve the rapidly growing technology and knowledge economy.… As we transform our curriculum, our co-curriculum and our entire university for this future workplace, we are pleased to note that the most technology-oriented CEOs are recognizing what we have known for quite some time—the central importance of the liberal arts in their new hires.

Setting aside its slapdash composition (will the university really prepare staff and faculty for high-quality jobs?), this passage makes it clear that the new curriculum will be determined by the supposed demands of the “future workplace.” Within this framework, the liberal arts—the precious repository of the depth and breadth of human culture—have value just insofar as they make graduates more appealing to “technology-oriented CEOs.”

“A great university,” the plan continues, “must be able to provide great value to its graduates.” This means preparing them for the “4th Industrial Revolution” where “the lines are blurred between the physical, digital and biological sciences and artificial intelligence, big data prediction, [and] precision medicine.” This undeniable blurring of lines is worth pondering. What are the philosophical implications of artificial intelligence and gene editing? What are the political implications of “big data prediction” and new surveillance technologies? The plan does not ask such questions, perhaps because they arise only within the framework of the liberal arts; and while the ancient Greeks and Romans and the Bible warn against hubris (technological or otherwise), True Commitment eliminated Greek, Latin, and undergraduate majors in philosophy and religion. Instead, it celebrates the new line-blurring: “It is all very exciting, for this revolution promises the opportunity for a more tailored, longer and safer life,” not to mention “even more personal choice in entertainment and shopping.”

These thoughts, too, give one pause. Is a “more tailored” life desirable? Tailored by whom? By the State, which Nietzsche called “the coldest of all cold monsters”? By corporations that harvest data about everything but our innermost thoughts? And is a human life really something cut to order? Isn’t there a difference between stitching a life out of prefabricated pieces and learning to live as an individual human being, capable of wholeness and flourishing? Computer coding, “an increasingly necessary basic skill and language for future employment,” cannot answer these questions. Nor can “design thinking, economics and financing of new initiatives, programming and coding for these new initiatives, engineering the build and maintenance of new modalities, gaming simulation scenarios and defending these new modalities and initiatives with advanced cybersecurity,” all of which are “skills … [that] need to be provided at this top-tier university.” But what of Aristotle, whose distinction between praxis and poiesis, humanly meaningful action and technical production, has never been more relevant?

In the new curriculum, emotions trump thought. The plan asks “How do we want TU students to feel?” The answer lies in the TU Commitment:

Accepted: Physically, emotionally and spiritually safe, valued for who you are and your potential now and forever.

Engaged: An active participant in your own learning to develop unique gifts and talents, not talked down to, you have a voice and a desire to be heard.

Empowered: So that your unique gifts and talents can be further developed for your personal growth, collaborative potential and the opportunity to bring value to others.

Lost in this word jumble (self-discovery is not a feeling!) is the indisputable fact that the tastes, sentiments, and passions of undergraduates need to be disciplined and refined by knowledge, especially the sort taught in humanities and social science courses. Otherwise they are likely to remain emotionally as well as intellectually immature.

But the clearest evidence of the plan’s inadequacy is furnished by its praise, echoed elsewhere by President Clancy, of a city that has come to exemplify colonial occupation, ideological indoctrination, and ethnic cleansing. “In energy-rich far west China, the new city of Karamay has 350,000 people and few buildings less than 10 years old. This model city for the future, built from the ground up in the past decade, has the ability to plan in [the] absence of tradition.”

Karamay, which Clancy visited in 2016, is in Xinjiang, a region where the plurality of residents are Uighurs. A 2014 New York Times article reported that profits from energy extraction in Karamay flow “mainly to the state-owned oil companies in Beijing and to the Communist Party, dominated by ethnic Han,” leaving “increasingly marginalized” Uighurs to contend with water shortages and severe pollution from coal gasification and coal-to-petrol projects. In 2014, the city banned people “with Islamic dress and long beards” from using buses and taxis. Today, Karamay and Xinjiang are home to detention camps where up to 1.8 million Uighurs and other Muslim minorities have been imprisoned for “reeducation”—“probably the largest internment of an ethnic or religious minority since the Holocaust,” according to one expert.

TU’s strategic plan serves as a warning to other universities about what not to do as they prepare for the future. A curriculum that trades the liberal arts for technical training robs students of an education and helps to pave the way to a dark, denuded, and thoroughly artificial world.

Jacob Howland is McFarlin Professor of Philosophy at the University of Tulsa. His latest book is Glaucon’s Fate: History, Myth, and Character in Plato‘s Republic.