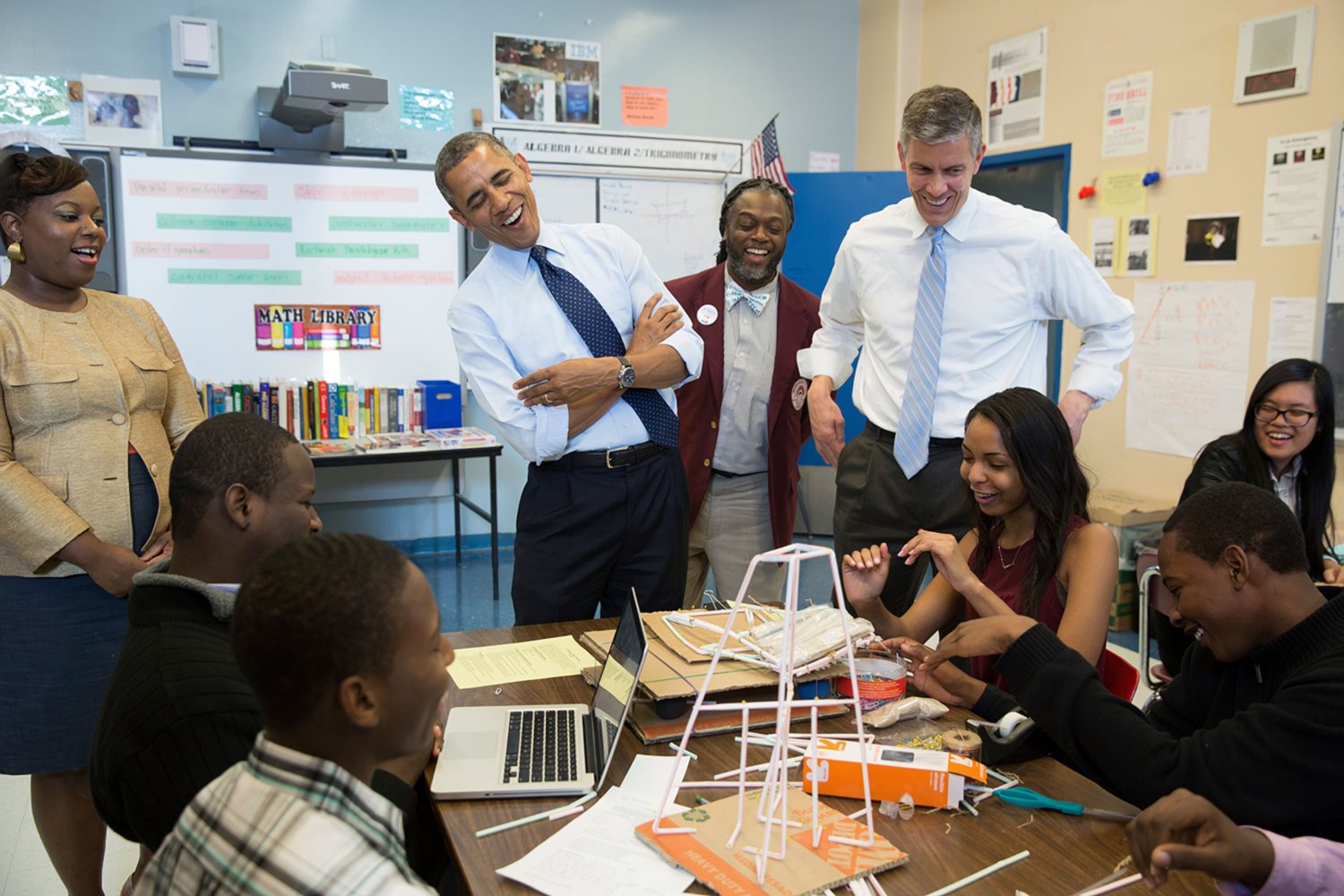 Ever since affirmative action debuted to skepticism and court challenges, educators have sought alternative blueprints for boosting minority representation in college and, in turn, the white-collar stratum of American society. This has been especially true in the technical disciplines that lead to high-paying STEM jobs. With the University of California poised to become the largest university system in the nation to scrap admissions testing, it might be instructive to look at another emerging academic phenomenon, as it raises legitimate questions about whether policies like California’s are effective strategies or seductive stratagems.

In 2011, IBM partnered with the New York City Department of Education and the City University of New York (CUNY) to launch its first Pathways in Technology Early College High School, or P-TECH, in the Crown Heights section of Brooklyn, New York. “Students in the program were 100 percent people of color, most from low-income families,” Stanley Litow, a chief architect of the program and former president of the IBM Foundation, effused in Barron’s.

P-TECH was billed as a quantum improvement over the rest of a movement then overspreading the land—and surely one of the most confusing, least uniform movements ever to do so: the early-college phenomenon. Technically, it was a misnomer to lump all such programs under the early college rubric, for in theory, key features distinguished early college per se from the two other major iterations of the trend: dual enrollment and concurrent enrollment. The official Early College High School Initiative (ECHSI), spearheaded in 2002 by the Bill & Melinda Gates Foundation, enabled disadvantaged high school students to earn up to two years of low- or no-cost credit toward an associate’s or bachelor’s degree. Prior to P-TECH, ECHSI was the most programmatic of the models, specifying certain coursework, unlike the more laissez-faire/a la carte approaches of the other two concepts, which differed from each other chiefly in terms of the instruction venues. Generally, if the college-level courses were taught at an actual college, the program was labeled dual enrollment; if they were taught at a high school, it was labeled concurrent enrollment.

But just as the word Kleenex soon came to refer to all tissues, early college eventually came to encompass any and all attempts to accelerate the pace of higher education for underprivileged youths. And many of the aforementioned distinctions proved to be nominal anyway; in practice, by the time P-TECH came along, the early college movement had become a hodgepodge of curricula wherein high school students could basically “[try] out a few [college] classes while still in high school,” as one info site described it. Studies of the phenomenon, like this one conducted in Texas, found almost as many variations between individual programs as there were programs. Notwithstanding formal labels, courses were sometimes taught on a college campus…and sometimes not…sometimes by instructors who would have passed muster in college classrooms…and sometimes not. Not infrequently the supposed college-level courses were found to be less academically stringent than conventional advanced-placement courses. In most settings these programs called for students to stay on beyond high school’s traditional grades 9 through 12 (from age 14 to 18), but in others the programs tasked students with squeezing an unusually aggressive “bolt on” course-load into the customary four years.

P-TECH, in contrast, promised one continuous all-embracing curriculum, a seamless six-year integration of tandem coursework and vocational tutelage that culminated in both a high school diploma and an associate’s degree in computer science. All of this would be free to the student. The process would cover grades 9 through 14, a nod to “free college” advocates who argue that basic public education should include college instead of ending with high school graduation after grade 12. P-TECH’s advocates emphasized from the first that it wasn’t a matter of “spending an extra two years in high school,” but rather a wholesale reconceptualization of the secondary-school experience in which high school, college, and career training were permitted to overlap. To quote from the literature, “Students see themselves as ‘college students’ and ‘on a career pathway’ from the moment they begin 9th grade.” P-TECH also foreshadowed initiatives like the new California university admissions system by enrolling students by lottery, thereby eliminating the entrance exams and other prerequisites that had long been a staple feature of New York’s elite science high schools. The IBM program also encompassed corporate internships and dangled the prospect of preferential hiring at the tech giant upon graduation.

P-TECH was lauded as responsive to two of the key thrusts in modern pedagogy: adding a more vocational tilt to higher education, and leveling a playing field perceived as biased against minorities, who typically lack the quality grade-school STEM prep that enables students to survive the challenging entrance gauntlet for spots in other top science programs. The lofty expectations for P-TECH were clear in the headline of a 2015 Wired piece, “IBM’s School Could Fix Education—And Tech’s Diversity Gap.” The principal of the pilot school, Rashid Davis, proclaimed his staff “missionaries” who were out to “change the world.” President Obama thought enough of P-TECH to mention it in his 2013 State of the Union address. He later called the concept “a ticket into the middle class.”

Unsurprisingly, the P-TECH model spread like a California wildfire. Microsoft, Johns Hopkins, and a variety of other major firms have since joined IBM in sponsoring new P-TECH installations, located almost exclusively in minority-majority neighborhoods. By year-end 2019, there will be 220 such schools serving 100,000 students. The technological scope has broadened, with programs variously designed to yield two-year degrees in any number of technical disciplines, some far removed from the IT curricula built into the original IBM installation. Data are still modest, but overall graduation rates are comparable to or better than those of conventional high school and two-year college programs. Some students have graduated in five years with both a diploma and an associate’s degree in hand.

Nirvana? Not so fast. Red flags were evident even in the Brooklyn prototype. NPR reported in 2016 that 21 percent of grades earned by P-TECH students in their college-level work at CUNY were Ds and Fs. Technical majors need a minimum C in each core course to stay on track for their associate’s degree and to matriculate, later, in four-year programs. But since retaking courses to boost grades would have thrown students off P-TECH’s aggressive timeline, IBM and the high school beseeched CUNY to make accommodations. College officials balked, but the response from Principal Davis was telling. He said he felt duty-bound “to protect the most vulnerable students” from “elitist policies and practices.” In short, allowances had to be made.

Those early glitches were seemingly smoothed over, and fewer students failed as the program moved along, but there is evidence that that mindset—making allowances for the vulnerable—became part and parcel of P-TECH and other early-college programs as they were scaled up. Critics allege a climate of flexible standards, grade inflation, and a watering down of the most demanding coursework—“college courses that were not college level,” as one math teacher lamented in the Chronicle of Higher Education. Alec Thomson, President of Schoolcraft College Faculty Forum, has observed that, “These high schoolers are provided with a modicum of familiarity and credit acquisition—not the mastery of skills and the development of abilities.” A university president went so far as to question whether engineers would emerge from these programs having mastered the calculus they need to succeed.

Lawmakers who examined various incarnations of dual-enrollment programs were stunned to find students earning college credits for taking gym. There are whispers of efforts to micromanage student success through a level of hands-on mentoring that reminds some of the way Division I athletes were “facilitated” in the bad old days, with strings pulled in order to justify the model. Tellingly, promotional material for these schools sometimes omits mention of students’ eventual achievement in standardized tests, which, according to think tank columnist Shannon Watkins, “are a stronger—and more precise—indicator of whether students are actually learning than graduation rates, which can be influenced by other factors such as grade inflation.” Some schools, like Chicago’s Sarah E. Goode STEM Academy, have had trouble maintaining an environment conducive to learning, resulting in a very poor “report card” [click “reports” on the linked page] for the school.

Also, as the programs and sponsorships diversified, they strayed farther from IBM’s founding “lesson plan.” Curricula and criteria differ wildly nowadays, which is concerning because most of these hundreds of proliferating programs are technically answerable to no particular credentialing body. The National Alliance for Concurrent Enrollment Programs (NACEP) is the sole national accrediting organization for dual enrollment partnerships of all types; a relative handful of the several hundred programs are listed as credentialed by NACEP. Aside from the qualitative problems cited above, this variability can create significant credit-transferability headaches. Although circumstances evolve on the fly, as of 2017, only about half of the existing programs in the US had agreements in place requiring public two- and four-year colleges to accept or transfer the credits earned from early-college programs.

However, the programs have caught the eye of legislators, who increasingly take steps to prevent more rigorous college officials from throwing a wrench into the process. Some states with a heavy dual-enrollment emphasis have banned the remedial courses typically mandated for students who enter college unprepared, so as not to slow the brisk pace of the early-college programs. As Thomson has written, “At a time when the majority of high school students are not considered to be ‘college-ready,’ it is curious that state lawmakers’ preferred remedy to these deficiencies is to accelerate students’ conduit to college.”

Although it’s premature to render any verdicts on the ultimate worth of early college as a whole, at a certain point we must ask if the goal is simply to protect students—as Principal Davis put it—or to project them through school and into the workforce without the proper groundwork in place? Bizarrely, as Thomson tells us, “In many places, dual enrollment programs are being expanded to target those individuals who struggle with high school basics.” Could there be a more succinct statement that such programs are being used—abused?—as a way of bypassing the usual readiness criteria in order to simply place students on a predetermined path?

One might argue that the latter ethic has actually been a key thread in American educational policy of the past several decades, connecting self-esteem-based education to affirmative action to early college to the University of California’s pending decision: attempts, one and all, to treat educational inequities symptomatically.

We are a people who like to right wrongs. We root for the underdog. But there is no panacea here. As I wrote recently in this space, proponents of self-esteem-based education, designed chiefly to help at-risk students, learned this lesson through the disastrous slide in test scores in the decades following its implementation. Meanwhile, backers of affirmative action are being forced to face up to its sobering failures on behalf of those admitted under its auspices, in terms of the both lackluster grades and dropout rates.

Nevertheless, we look out across the landscape of society and see a success gap that skews along racial lines, and in our zeal to mitigate that gap we repeatedly take shortcuts of dubious value to the supposed beneficiaries. These only impede the pursuit of excellence in a nation that should be striving to raise the bar, not lower it.

Steve Salerno is a widely published essayist and professor of journalism. His 2005 book, SHAM: How the Self-Help Movement Made America Helpless, explored the self-improvement industry’s wider footprint in society. You can follow him on Twitter @iwrotesham