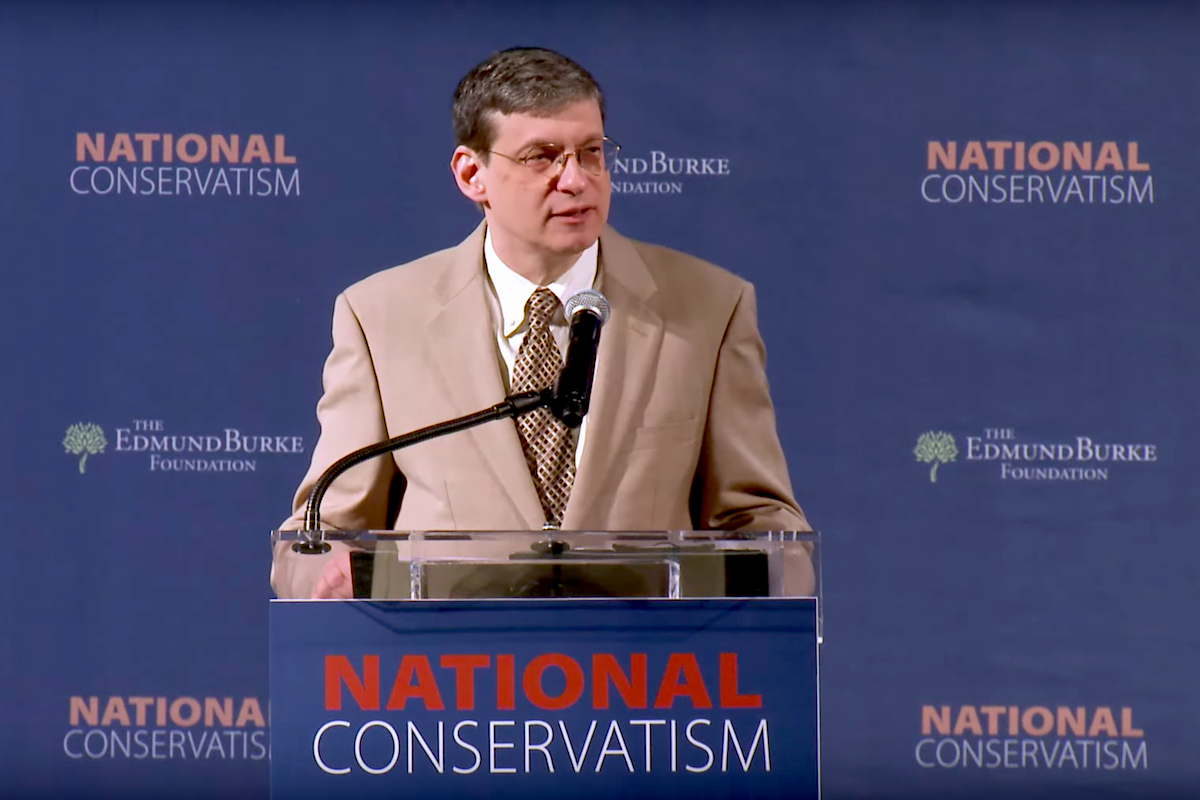 A nation that makes greatness its polestar can never be free.
~Abraham Bishop

First, national conservatives are much more willing to question the efficacy and desirability of markets in allocating a nation’s resources. Oren Cass, a senior fellow at the Manhattan Institute, argued that “market economies do not automatically allocate resources well across sectors” and that “policymakers have tools that can support vital sectors that might otherwise suffer from underinvestment,” namely industrial policy. This entails wide-ranging federal programs that subsidize research and development, increase infrastructure investment, and impose “local content requirements in key supply chains like communications,” among other interventions. Not all conference attendees were on board with this kind of a program—Richard Reinsch, editor of the popular Law & Liberty website, was skeptical that the benefits of industrial policy outweighed the costs—but on the whole, it is fair to say economic nationalism is replacing conservatives’ past adherence to laissez-faire as an economic doctrine.

Second, national conservatives are comfortable using political power to combat what they perceive as social and cultural decline. Sen. Josh Hawley (R-MO), a rising star in the movement, gave one of the keynote addresses, in which he condemned the “cosmopolitan consensus” imposed by elites. This consensus, embodied in policy for decades, resulted in “more immigration, more movement of capital, more trade on whatever terms,” which in turn has eroded the American nation’s culture. No more, declared Sen. Hawley: “America is not going to become the rest of the world. And the rest of the world is not going to become America.” This is a broad call to political action. While his speech did not contain specific policy proposals, the grand strategy was clear: political power can and should be used to renew and protect the American way of life. Conservatives have always been willing to fight the culture war, but frequently have balked at using the national government to do it. National conservatives appear ready to discard these qualms.

Third, and most significant, was the conference’s explicit philosophical distancing from what American conservatism historically entailed. Yoram Hazony, the intellectual godfather of the movement, gave an address that made this ideological shift clear. “Today we declare independence,” Hazony announced, “from neoliberalism, from libertarianism, from what they call classical liberalism. From the set of ideas that sees the atomic individual, the free and equal individual, as the only thing that matters in politics.” American conservatism indeed took classical liberalism as its lodestar. Conservatives tended to agree with Adam Smith, the great philosopher of the Scottish Enlightenment, that “the obvious and simple system of natural liberty,” characterized by “peace, easy taxes, and a tolerable administration of justice,” was both the most just and effective political system. Now it seems these widely accepted axioms have been thrown into doubt.

In addition to the above, national conservatives discussed and considered protective tariffs, immigration restrictions, and promotion of national identity, all carried out with the assistance of a friendly national government. Discouraged and angered by older conservatives’ failure to conserve America’s sociopolitical patrimony, national conservatives have begun to coalesce around a bold new political project, the goal of which seems to be both a rejuvenated public square and a robust conception of national greatness.

Admittedly, conference attendees were not unanimous in their support for state-led construction of the good society. Yuval Levin, a noted intellectual in the broader conservative movement, recognized that the political pursuit of national greatness often harms the voluntary civil associations that strengthen a nation and constitute its unity. This reflects an element of national conservatism that is unwilling to depart from the Burkean grounding of American conservatism. Nonetheless, the conference consensus seems clear: it is time for conservatives to overcome their skepticism of the state and, in the words of attendee J.D. Vance, “actually be willing to use politics and political power to accomplish” conservative goals.

It is too early to say whether national conservatism is the new normal for American conservatism. Perhaps the Burkean faction will overcome the currently dominant Rooseveltian faction. Perhaps the movement will strike a middle ground between these two poles, or set out in another direction entirely. But, based on its current course, we have a right to be worried. We have seen political projects like this before. There is one possibility of which we should be especially wary: national conservatism represents the final conquest of the American political spectrum by Prussia.

This claim requires explanation. Starting in the late nineteenth century, many American philosophers, social scientists, and historians took their PhD’s abroad in Germany, which then comprised several different polities. There, they were exposed to the Prussian political-intellectual tradition of an activist state, hierarchically administered by a special governing class. When they returned to the United States to continue their careers in academia and government, they formed the vanguard of what we now call the progressive movement. The vast growth of government in scale and scope, especially the Executive Branch, is a consequence of that movement’s success. Today, there is no significant American politician or thinker on the Left who is not at least a fellow traveler of progressivism.

For a century, resistance to this model of government was waged by those who favored federalism, a separation of powers, and strong Constitutional protection for individual rights.  After the Second World War, the various factions that stood for these things coalesced into the conservative movement. It was always a rearguard action, trying to reverse significant constitutional changes, either de jure or de facto, won by progressives. But now, it looks like those who have taken up the mantle of conservatism are willing to make peace with a vigorous national government. No longer content to get the state back in the role of a referee, they want to make it a player on their team.

When you consider the various proposals of the national conservatives, it certainly seems like they embrace a right-wing version of the Prussian model that was successfully appropriated by the Left a century ago. Those who identify as national conservatives may bristle at this label, but it is a fair characterization. Empowering the state to advance a concrete vision of the common good, guided by enlightened statesmen with the right set of social values, is the hallmark of the Germanic policy sciences.

Despite their claims to represent the will of the people, especially those left behind by the globalist-cosmopolitan consensus of the past 30 years, national conservatives are flirting with a vision of the state that is inherently hierarchical and elitist. The relevant personal analogy here is Federick II, or perhaps Bismarck. The model national conservatives are considering only works with a state divided into rulers and subjects. The associational model of government, in which all are citizens and none are masters, fits less well with nationalist conservative goals.

National conservatives have some valid concerns. They recognize the problem of perpetual budget deficits and the accumulation of national debt, which burdens future generations before they can exercise their right of political voice. They also understand that many features of the post-New Deal administrative state impede democratic self-governance. The issue is not primarily with their ends, but their means. Unless they change course, they run the risk of subjecting New World self-governance to Old World state-building. If national conservatives take up the weapons of their enemies to fight them, they will become that which they sought to destroy.

The great virtue of the older kind of conservatism was its organic link to the republican democracy of the Founding. Making peace with the power of the national government to achieve admittedly desirable social goals will sever this link. If this happens, the American tradition of government will no longer have a significant voice in the public square. All Americans will be worse off for it.

Alexander William Salter is an assistant professor in the Rawls College of Business at Texas Tech University.  He is also the Comparative Economics Research Fellow at TTU’s Free Market Institute.  His scholarly and popular writing can be found at his website: www.awsalter.com.