On the 75th anniversary of the extermination of most of Hungary’s Jews—including the Auschwitz deportations, which began in May, 1944—we should also take note of the Hungarian government’s apparent determination to distort the country’s historical record. In some circles, this effort includes even the rehabilitation of Miklós Horthy, the longtime Hungarian Regent who governed Hungary during the Holocaust.

A former admiral and adjutant to the Habsburg Emperor-King, Horthy entered Budapest in dramatic style with his army on November 16, 1919, astride a white horse. His army defeated the ragtag Bolshevik forces that had imposed 133 days of “Red Terror” upon the country, but also inflicted its own “White Terror,” in some ways more brutal than its communist predecessor. Early during Horthy’s rule, Hungary enacted some of Europe’s first 20th-century anti-Jewish laws. Jews were capped at 6% of university admissions, and subsequent measures limited Jewish participation in elite professions to the same benchmark.

Jews also were prohibited from working in the public service and judiciary, or as high school teachers. During World War II, an additional law was passed prohibiting marriage or sex between Christians and Jews, on the grounds that such unions were harmful to the “national soul.” 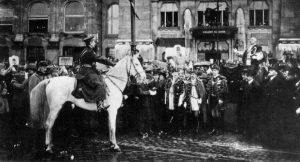 Even before Hungary actively rallied to the German war effort, most of Hungary’s young Jewish men had been dispatched to so-called labour battalions, serving unarmed near the front, where they were as likely to be killed by their commandants as by enemy fire. In 1941, the Hungarian army rounded up about 17,000 Jews who couldn’t prove they were citizens, and dumped them across the border into Ukraine, where they were systematically massacred by German death squads. By 1942, labour service had been extended to all Jewish men under the age of 45. All this happened while Horthy—an “exceptional statesman,” according to current Hungarian Prime Minister Viktor Orbán—ran the country.

Meanwhile, Hungary’s participation in the invasion of the USSR led to the extermination of the flower of Hungarian youth. At the 1942 battle of Voronezh and subsequent operations, the underequipped Hungarian 2nd Army was practically wiped out as it launched itself against Russian defences in support of the ultimately disastrous German thrust toward Stalingrad. By late 1944, Russian troops got to the outskirts of Budapest, which suffered through a 50-day siege before Axis forces surrendered on February 13, 1945. Almost 40,000 civilians died during this period, and much of the city was destroyed.

By this time, most of the country’s Jews already had been deported to concentration camps. In all, an estimated 565,000 Hungarian Jews were murdered during the Holocaust. Historical documents show that even some Germans were amazed by the speed and efficiency of the Hungarian government’s co-operation, and by the cruelty of its gendarmerie. 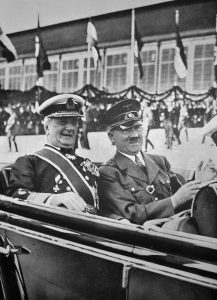 Some of the few elderly Hungarian Jews who survived in the Budapest ghetto can still remember scenes of rats feasting on the unburied dead in Klauzal Square, and the trigger-happy young men guarding the gates. I have spoken to many survivors, including Max Eisen, a Canadian Holocaust educator, who was a young teenager when his family was rounded up and sent to Auschwitz. He still remembers the terror of being crammed into a boxcar, standing-room only, a hundred to a car, with no water, food or sunlight. To this day, Eisen has nightmares about his mother holding his nine-month-old sister during that three-day journey. Most of his family was murdered mere hours after arriving on the platform at Birkenau. His father’s last words to him were: “If you survive, you must tell the world what happened”—which is what Eisen did with his devastating 2016 book, By Chance Alone.

But Horthy, who survived the war and lived till 1957, had different memories to relate. In his Memoirs, he pompously declared of the mid-1930s that “though times had changed considerably since I had been aide-de-camp to His Majesty Emperor Francis Joseph, my concepts of honour, law and justice…had not altered.” Of meeting Hitler in 1936, he wrote: “It was not my task to stand in judgment upon the man who, since he had come to power, had shown nothing but goodwill towards Hungary, and who had sent me an extremely friendly telegram on the 15th anniversary of my entry into Budapest. I decided, therefore, to avail myself of an Austrian invitation to a chamois [goat-antelope] shoot in August, 1936, to seize the opportunity of paying a personal visit to Herr Hitler. The Austrian Chancellor Schuschnigg had offered me the choice between three hunting preserves; I chose Hinterriss, which is famous for its chamois and to which Bavaria affords the only access.”

In concrete terms, the German “goodwill” consisted of allowing Hungary to reclaim parts of historical territories it had lost after throwing in with the losing side in World War I. Horthy’s primary concern was to restore Hungary’s former borders, even if that meant joining the Nazi war effort. As such, his strong nationalism has a certain appeal to modern populists such as Orbán.

In his Memoirs, Horthy uses terms such as “regrettable excesses” to describe massacres of Jews. He claims that he told Hitler, in early 1944, that “a violent solution [to Hungarian Jews] would be contrary to humanity and morals would not only undermine law and order but would have a deleterious effect on production.” He also claimed that in mid-1944—after he had been marginalized by the Germans, who by now were taking direct control of the country—that he did what he could to save the Jews who remained. 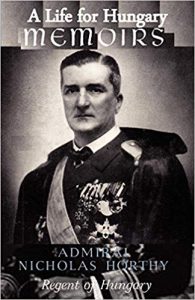 On October 15, 1944, Horthy announced over the radio that he had decided to sign a separate peace treaty with the Allies and withdraw Hungary from the conflict. He talked of the grave injustices inflicted by the 1920 Treaty of Trianon, which had set the fate of Hungary following the First World War. He blamed everyone except himself for the tragedies that had unfolded. His one passing reference to the slaughter of his nation’s Jews was contained in this sentence: “In the shelter of German occupation, the Gestapo tackled the Jewish question in a manner incompatible with the demands of humanity, applying methods it had already employed elsewhere.” It was lost on no one that Horthy was changing sides in the war only after it had become obvious that the Nazis would lose.

Many Jewish survivors recall the forced marches to the Austrian border that began in November, 1944. There were women and children, grandmothers and toddlers. It took more than three days to cover the distance from Budapest. A woman named Aviva told me that those who could not move were shot, and the ditches were lined with bodies. There was no food or shelter. Young Hungarian men stood guard along the route. These were members of the Arrow Cross Party, the far-right Hungarian movement that would run the country from late 1944 to March, 1945.

Near the border, Aviva’s group was joined by a rag-tag group of labour-service men who had been force-marched from the Bor copper mines—more than 300 of them having already been killed. One of the survivors was the young Hungarian poet Mikos Radnoti. He was murdered near Gyor in Western Hungary. When his body was found in a mass grave, his pockets were filled with scraps of paper—his last poems. 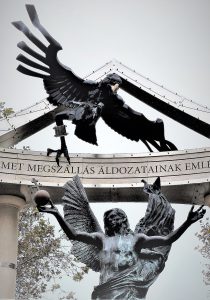 Hungary does not deny the fate of its Jews. Indeed, 2014 was declared to be a year of official Holocaust remembrance. But a memorial commissioned by Viktor Orbán’s ruling Fidesz party and erected in Budapest’s Liberty Square has provoked controversy, and even outrage. It presents Hungary in the guise of a thin, languid Archangel Gabriel-like figure being seized upon by a nasty-looking German bronze eagle with outstretched wings and terrifying claws—a symbol plainly meant to suggest Hungary was an innocent party that had been preyed upon by an evil outside force. Historian Krisztian Ungvary has called it a “living horror,” and it has attracted regular protests. But the message is consistent with the larger agenda of Orbán, who wants to promote a new, whitewashed form of national history, according to which the suffering of the Jews was no more nor less brutal than that endured by the entire country under Nazi and then Soviet rule.

During this final spasm of senseless slaughter, thousands of Jews were marched to the Danube and shot, or just pushed into the icy waters to die. It’s important to remember that the killers weren’t German soldiers, but members of Hungary’s own Arrow Cross movement. During my research, I interviewed a survivor—a 4-year old-child at the time—who remembers being taken to the river with his mother. To this day, he thinks it was his childish voice that saved his family when he asked, “Mr. Arrow Cross, when can we go home?” he and his relatives were then ushered out of the line of fire, and he survived to tell the story. 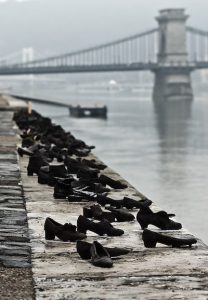 “Shoes on the Danube” memorial

Orbán’s favorite historian, Maria Schmidt, is in charge of the museum known as House of Terror, at 60 Andrassy Boulevard in Budapest. It commemorates both the Nazi terror and the Communist terror, and includes material about Hungarian victims of the Holocaust. Five of the museum’s 17 rooms contain exhibits relating to this subject. But the same historian is also in charge of another, more controversial museum—the House of Fates, which originally had been set to open its doors five years ago. Its initial mandate had been to commemorate the Hungarian experience of the Holocaust. Israel’s Yad Vashem, Washington’s Holocaust Memorial Museum, and the distinguished Hungarian-American professor Randolph Braham (1922-2018) were invited to collaborate. But almost from the beginning, the government’s local appointees reportedly began to push for a new version of the narrative, one by which Hungarians were largely blameless victims of German and Soviet aggression. The whole project fell into limbo, seemingly hostage to opposing historical voices. A Yad Vashem official declared that, from what he’d seen, “visitors to the House of Fates are to be shown and taught that, except for a tiny, criminal and fanatic minority, the citizens of Hungary were essentially blameless for what was inflicted upon their Jewish neighbors.”

As someone who grew up under Hungary’s communist dictatorship, I have a complicated relationship with the past—as my memories of family and friends are intermingled with the fears of saying the wrong thing in a country where judges, schools, the judiciary and the education system were all controlled by the government. And I can see why the country itself also has a complicated relationship with the horrors that its citizens witnessed, endured—and inflicted. But the only way to start healing from these crimes is to acknowledge how they happened.

Anna Porter is an award-winning Hungarian-Canadian writer and former publisher. Her books include In Other Words: How I Fell in Love with Canada One Book at a Time, Buying a Better World: George Soros and Billionaire Philanthropy, and Kasztner’s Train: The True Story of Rezso Kasztner, Unknown Hero of the Holocaust.