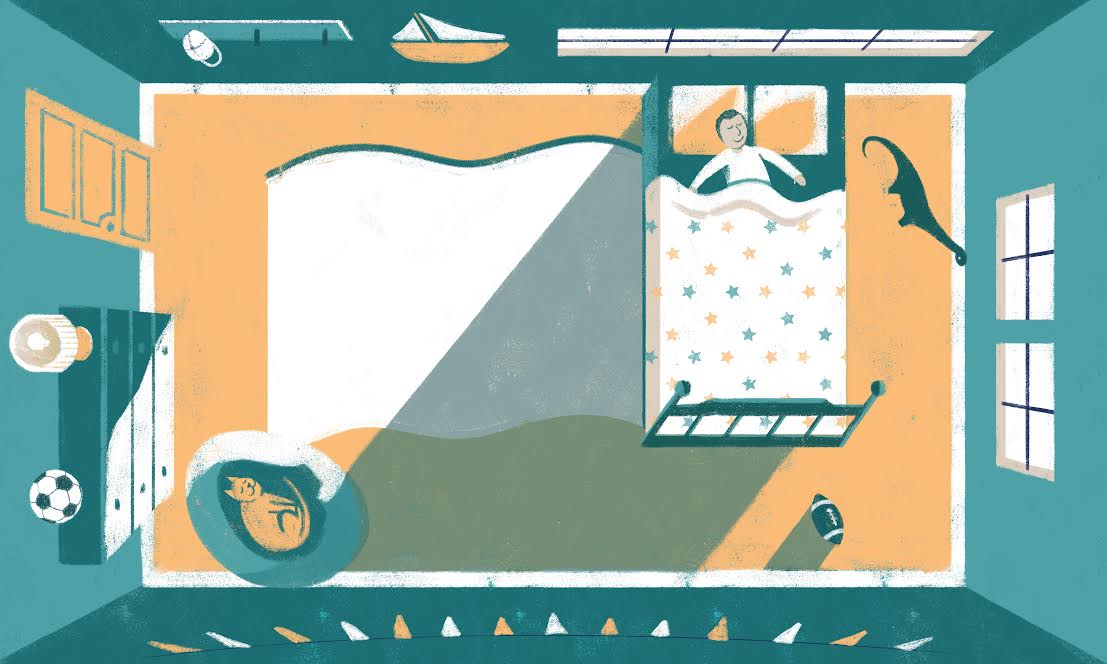 My bedroom is a strange shape. The apartment was added to the house sometime in the last century and the bedroom walls are made of barge board, from the house’s original construction over 200 years ago, when they took apart boats unable to return upstream before the advent of the steam engine.

The door to the bedroom was made by opening the wall and allowing it to fold like an accordion. Because of this the door juts into the room, radically interrupting what should be a rectangle. There’s only enough space for a full bed, and I have to squeeze between the bed and the door when I get up in the middle of the night. Most of the space in the room is wasted, and uncomfortable, the way life is sometimes.

It seems like the only way the bedroom could work is for the bed to be horizontal, otherwise the space will always seem unintentional, which I suppose it is. I mean, it was intentionally built when they divided the house into two units, but the intent was to build a small apartment, nothing more. And in that way it’s already a success. I live in it.

I’m 47 and my apartment is 325 square feet. Of course, if you measure your life by the size of your apartment you’ve got bigger problems than squeezing between the door and the bed to go to the bathroom in the middle of the night. Bigger problems than spending too much time playing video games and an inability to love. If you’re going to judge your life by the size of your apartment then you’re better off not thinking of any of it. Just watch some docu-series on Showtime about prison breaks and plug into your twitter feed and let the time pass peacefully. Because the size of your apartment does not matter. Or it does, but it’s not a statement on whether or not you’re successful. But then how do we measure success? Or a better question might be, why?

The house is two units, a divided Creole cottage consisting of my small apartment and a larger, two-bedroom. It’s one of the oldest houses in New Orleans outside of the French Quarter, built down river from the old city limits between 1810 and 1820, on part of the plantation owned by the family of Bernard De Marigny.

According to a local historian the house was probably occupied by freed slaves, possibly even an interracial couple. By 1840 standards New Orleans was a progressive place.

Most of the house is original. Even the shutters and the french doors. Fate left the original bathroom with its brick lined tub to the smaller unit where I live. It’s not a fancy house, and it needs repair, but it has character and a history worth plumbing.

I rent out the larger unit to pay the mortgage, but things are tight and I’ve been eating into my savings. A little over a month ago someone spray painted SCUM in bright pink letters on the shutters in front of my house. So that’s part of my life these days, too.

I’ve been corresponding with S., who is nice and beautiful and ready to be in love (though she wouldn’t say so). She lives almost 2,000 miles away in the city I left to move here. She didn’t decide to like me until I was already gone and that’s for the best; I am old enough to know we won’t work out. If I allowed myself to fall in love with her, I would end up falling out of love and it wouldn’t make sense to either of us. Just that at some moment my feelings would be replaced with new feelings, as if the originals had been stolen and the thief, in an effort to avoid apprehension, left behind a cheap imitation that was somehow less an approximation than its exact opposite.

She sends me pictures of herself trying on dresses, getting ready for dates with men. She can’t decide if they’re boyfriends or clients. The way she undercharges is the strongest argument for pimps I’ve ever heard, but I don’t want to be involved. I respond with pictures of planks and salvage bins. S. is nurturing but not motherly. Old fashioned in the sense that she was an immigrant, literally raised by her grandparents in the jungle in Cambodia. She likes to paint. She likes bright colors and has effortless style. But her ambitions aren’t about making art; it’s just something she does in her spare time.

“Why don’t you make more money so you can be my sugar-daddy,” she asks.

“Not likely,” I reply. I tell her she looks amazing in every dress she wears.

She was 20 when she moved to America with her parents 14 years ago, all of them sharing a room in her uncle’s apartment. She enrolled in English courses and began an affair with her teacher who said he was going to leave his wife, but never did. She wants to be financially stable one day. She wants to provide for her parents and brother. But she also wants love and she’s uncommonly good looking so she meets a lot of guys who also think they want love but don’t know themselves well enough to separate something temporary from something more permanent, and perhaps don’t know what they’re incapable of.

I have to fix the bed, or train myself to accept things the way they are. I’ve heard that one way to solve life’s big problems is to start small. But a junkie I used to know told me it doesn’t actually work that way. “That’s just a saying,” she said. “Like ‘one day at a time’ or ‘keep it simple.’ The upside is that it can be distracting and sometimes that’s enough.”

I spend weeks looking at beds online, watching videos, downloading plans for attic beds, platform beds, Fuji beds. The problem is that the space, if the bed is horizontal, is 77 inches by 70 inches, which would seem Ok for a full bed, since full mattresses are only 75” by 55”. But it’s not that simple. Most of the bed frames are 80” by 60”. And even just the mattress on the floor wouldn’t work because of 5 inches of base trim. Also, I’m not very handy. I don’t know how to build things. And things never look how I think they’re going to look. I approach interior design the way I approach writing. I put furniture in a room and move it around until it looks right. Sometimes it never does.

I buy sheets of birch plywood and have each cut to 35”x77”. I consider hardboard. It’s $40 cheaper. But I don’t like the look of it, and I’m worried about the chemicals. Which doesn’t make sense as I also buy a tin of walnut stain and a pack of 3/8” joint fasteners.

I spend the day on the back porch sanding the planks and applying stain. At the salvage yard I buy a gallon of recycled green paint for $10 and brushes for $1 a piece. I consider cinder blocks for the base, but they’re shockingly heavy and there would be nothing outside of a very thick carpet that would protect the floors. And even a thick carpet would wear over time. Instead I buy an old 72”x46” pallet for $5 and tie it to the top of my car.

Back home I paint the boards and sand around the edges to give them a weathered look. I send S. pictures while I work. I send her pictures of the pallet tied to the top of my car. I send her links to songs I’m listening to. She says she’s quitting her job and starting a new business. She sends me pictures of her dog, a Japanese Chin with a pink tail.

I don’t love the color of the painted boards, but it’s fine. I go back to the hardware store where they give me free samples of expensive chalk paints. I buy a thicker sandpaper and, impulsively, a jar of finishing wax.

S. encourages me to paint one side red and the other honey. I think about flying back to visit her, to make soup together and walk the dog. But there’s the price of the plane ticket. I keep painting layers and sanding the wood. It doesn’t make much sense. How much will I even be able to see with a mattress on top of it? But I don’t feel like stopping.

I go to the café in the morning and try to write but my ideas feel unformed. At the same time, I can tell they’re coming into shape. Over the last year, I lost most of my friends. And I began to question everything I thought I believed. I thought I was going crazy, or everyone else was. It seemed like the world had turned its back on reason and culture had turned its back on art. People who had chosen politics based on kindness had become intolerant and unkind. Artists were expected to pass a morality test or be denied platforms. Without a tribe I’m free to reinvent myself, or stay exactly as I am, which is also a reinvention since everyone else is different.

Once the boards are painted, I sand the edges with 60 grit sandpaper so you can see the green paint underneath, and the stained birch under that, and in some places the lighter birch under the stain. Then I coat them in a layer of satin wax.

The next day I join them together, but there’s no space that will fit them side by side, except for the place they’re meant to be. The screen porch is too small.

I take apart the old bed and lay the boards out. They fit perfectly, but, because of the baseboards, they’re 3/4 of an inch off the ground. I put a block of wood underneath so I can pound the joints to connect them, but they’re clearly meant for softwood like pine. I call my friend Roger to talk about it. I’ve known Roger since 3rd grade. He still lives in Chicago. I’m living in my fourth city in five years, but it’s the only place I’ve ever owned a house so it seems unlikely I’ll be moving again.

“It’s all learning,” Roger says. “This is how you figure out how to build things.”

“I guess there’s only one way to learn anything,” I say. “The hard way.”

I go back to the hardware store and purchase drill bits and screws. J., who cut the boards for me, is outside smoking pot and listening to music and I hang out with him for a little while. I feel like dancing but just sit and listen to the music. It’s like a party.

Back home I flip the panels and attach the base from the old bed, a 3/4 inch thick slab of plywood, 75’’ long and 55” wide. But now the piece is too heavy to lift, so I leverage a 2×4 to stand it up. Then I place the pallet to give the bed 5” more of height. I flip the platform onto the pallet and pour wood glue into the seam, wiping the excess. I put the mattress on the platform and dress it. I think it’s beautiful, though you can barely see the panels I spent three days staining, painting, and distressing. Up close though you can see it, whether or not it means anything to you.