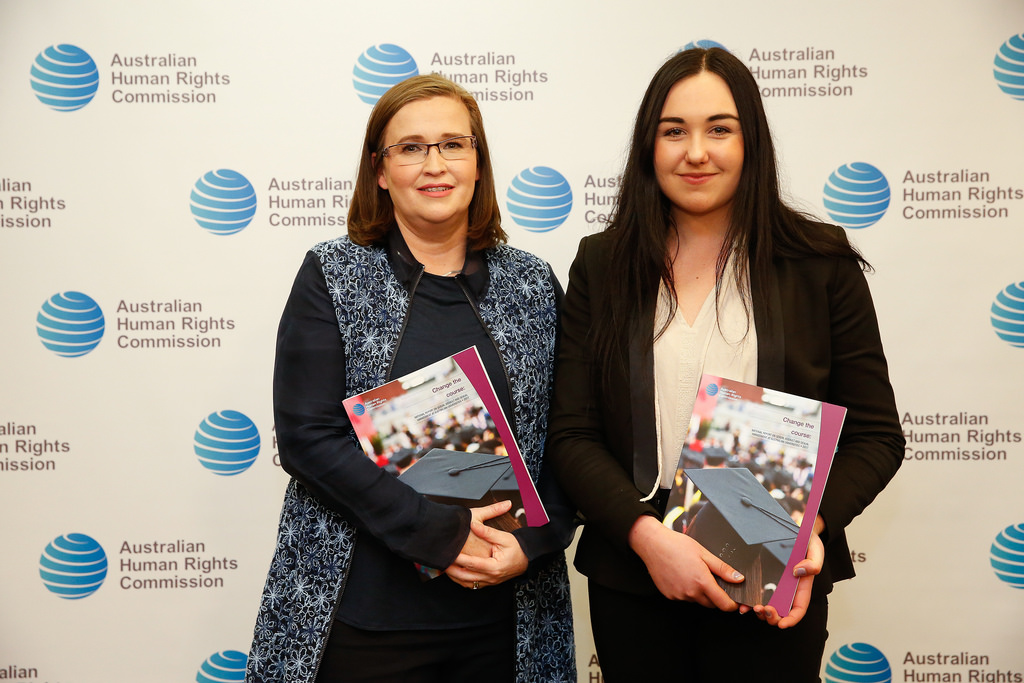 What do senior university administrators chat about when they attend overseas conferences with others of their kind? Surely when vice-chancellors hobnob with American college presidents the conversation must sometimes stray to their troubles—particularly the costly business of managing the so-called “campus rape crisis.”

So how come these smart leaders from the Australian higher education sector haven’t twigged to the dangers ahead? Ripples from the fallout of the campus rape frenzy on American college campuses have travelled across the world. Back in the 1990s, there were campus protests with furious young women brandishing placards claiming one in four students are raped. The alarmist 2015 propaganda movie The Hunting Ground was screened across the country, showing serial rapists preying on college women. By 2011, the activists had achieved their main goal, with Obama requiring all publicly-funded universities to set up tribunals for determining sexual assault cases.

So American universities got into the criminal investigation business, with lower standards of proof greatly increasing the chances of conviction in date rape cases. Such cases remain a stumbling block in the highly successful and much needed feminist push for justice for rape victims. Rape allegations are now treated far more seriously, convictions are more common and attract far higher penalties. According to the NSW Bureau of Crime Statistics, in my own state of New South Wales, numbers of sexual assault convictions have almost doubled since 1995, and over 50 percent of such convictions receive prison sentences compared to about 10 percent of other crimes.1

But in he-said, she-said cases, often involving intoxicated youngsters, juries are notoriously reluctant to send young men to jail, particularly when they don’t know who to believe. The American college tribunal system lowered the bar, requiring lower standards of proof, with the accused not protected by lawyers, often denied full access to allegations, and lacking other legal rights available under criminal law. It’s led to a steady stream of young men (and occasionally women) being suspended from college, their lives derailed by this “victim-centred justice.”

That’s proved a mighty costly exercise for the American university system, particularly with a number of these accused young men and their families winning legal cases and receiving substantial payouts from colleges that failed to protect due process rights. Hundreds of lawsuits have been filed against universities alleging such violations. In most cases, judges have ruled in favor of the accused student and there has been increasing public disquiet about the unfairness of these kangaroo courts. In a 2016 ruling against Brandeis University, a US district court judge wrote:

If a college student is to be marked for life as a sexual predator, it is reasonable to require that he be provided a fair opportunity to defend himself and an impartial arbiter to make that decision. Put simply, a fair determination of the facts requires a fair process, not tilted to favour a particular outcome, and a fair and neutral fact-finder, not predisposed to reach a particular conclusion.

All of this has played out publicly on the world stage. Yet, despite all the warnings, Australian universities are cheerfully bounding down the same road. What is quite astonishing is that here they are doing in the face of solid evidence that the campus rape crisis simply doesn’t exist.

In August 2017, the Australian Human Rights Commission released the results of a million-dollar survey into sexual assault and harassment on university campuses, following years of lobbying by local activists. Designed to provide proof of the rape crisis, it proved to be a total fizzer. Only 0.8 percent per year of the 30,000 surveyed reported any sexual assault, even using the broadest possible definition including “tricked into sex against your will” and sexual contact with a stranger on the bus or train trip to university. In response, the activists immediately shifted ground, issuing alarmist warnings about high levels of sexual violence which was actually low grade harassment, including staring, sexual jokes or comments.

The results were in, but I was the only journalist writing in mainstream media that day to celebrate our safe campuses. My news story included data from the NSW Bureau of Crime Statistics showing campuses are about 100 times safer than the rest of the community for young women.2

Across the country, vice-chancellors kowtowed to the feminist activists with endless displays of virtue-signalling, promising to tackle the sexual violence with 24-hour help lines, sexual assault and harassment units, and sexual consent courses. I wrote to all our major universities posing a series of questions about why our cash-strapped universities are choosing to lie about the safety of our campuses, and risking scaring off Asian families from sending their daughters to study in this country. The result was endless weasel words from University media units—not one acknowledged that the whole thing is a farce.

The emperor has no clothes. This was the image that inspired me. Our pompous vice-chancellors parading before us, totally naked, whilst the entire university sector, including eminent social scientists, cowered in silence, denying the solid research evidence of safe campuses. That is what led me to embark on a campus tour, seeking out student groups to invite me onto campuses where I could discuss the illusory rape crisis and the related push for university involvement in adjudicating sexual assault. My background as one of Australia’s first sex therapists with a long history of writing about gender issues made this process easier.

The results have been pretty much as expected. My first talk, scheduled for August at La Trobe University in Melbourne, was suddenly cancelled when university administrators claimed it didn’t align with the values of the University. Following media pressure, the university backed down—but only after a conversation with one of the administrators who suggested they may need to offer counselling to students attending the talk. The event went ahead, despite protest demonstrations and a very noisy crowd of protesters bashing on the doors to the venue, shouting into megaphones and doing their best to drown out our discussion.

At Sydney University, the protests were far more alarming. Here, the University insisted on charging the student club hosting the event a security fee of nearly $500 for guards who had no authority to remove the aggressive mob of abusive protesters who blocked the corridor leading to the venue, preventing my audience from accessing the room and roughing up anyone who tried to get through. The escalating violence and abuse led the guards to call in the riot squad, who removed the protesters, allowing the event to proceed.

I’ve asked the university to take action against named key protesters for breaches to the University’s code of conduct and bullying/harassment regulations. An investigation is currently underway. Yet it seems unlikely that the University will act. Last year, the University’s own workplace disputes consultants recommended the key organiser of my protest should receive a suspension for misconduct because she had subjected an anti-abortion group on campus to all manner of abuse, including exposing her breasts to them. Yet still the University failed to follow through. Charges were dropped, without any explanation.

We are taking further action following up on the vice-chancellor’s decision not to fully refund the security fee. (Some was returned due to an administrative error leading to overcharging.) Vice-chancellor Michael Spence declared the guards had fulfilled their protocols, despite the riot squad being required for the talk to proceed. Sydney University has long been allowing a heckler’s veto to flourish on campus, whereby conservative student groups are charged prohibitively high security fees to protect them from violent radical protesters.

The whole fracas has proved quite a tipping point for community frustration over the failure of universities to protect free speech. All manner of eminent people spoke out, including former High Court chief justice Robert French, who warned that universities were risking their reputations by restricting speech on campus. They should “maintain a robust culture of open speech and discussion even though it may involve people hearing views that they find offensive or hurtful,” he suggested. The newly appointed Federal Education Minister has been raising the issue with vice-chancellors, Senators are grilling bureaucrats in parliamentary committees, and there’s been much public discussion about the need for our universities to sign up to a Chicago charter.

The free speech debate is encouraging but it’s not my main game—which is exposing the false campus rape narrative and the related push towards university-based justice for sex crimes. It is proving mighty difficult to break the stranglehold of the activists silencing my attempts to call attention to this dangerous trend. Just this week, the student group hosting my next talk told me we couldn’t mention a “rape” crisis in a poster because it might trigger rape victims during their current exams.

Meanwhile, Australian universities are already caving to pressure to get involved in sexual abuse investigations. Last year, I spent eight months helping a PhD student at Adelaide University ward off a university committee which was investigating a sexual assault allegation from another student. I found a criminal barrister set to give him pro bono advice, and eventually the university dropped the charges but only after a long and stressful battle. That committee had the power to withhold the young man’s PhD unless he cooperated.

Across Australia, universities are introducing regulations to support such investigations, whereby the lower standard of “balance of probabilities” will be used to decide sexual assault matters. At UTS in Sydney, the committee investigating sexual assault includes students amongst its members.

How is it possible that all this is happening just when the Trump administration has announced changes to the tribunal system to wind back victim-centred justice and protect due process rights for the accused? Earlier this year, over 150 American criminal lawyers, law professors and scholars signed an open letter denouncing the victim-centred investigative practises which flourished under the Obama system:

By their very name, their ideology, and the methods they foster, ‘believe the victim’ concepts presume the guilt of an accused. This is the antithesis of the most rudimentary notions of justice. In directing investigators to corroborate allegations, ignore reporting inconsistencies, and undermine defenses, the ‘believe the victim’ movement threatens to subvert constitutionally-rooted due process protections.

Last year, a series of UK rape cases collapsed following revelations of deliberate withholding of key evidence by prosecutors and police, part of the same victim-centred justice. In the ensuring scandal which followed, the former Director of Public Prosecutions stepped down and it was decided that key rape and serious sexual assault cases should be reviewed. The Metropolitan Police have now announced that they are ditching their previous practice of “believing all victims.”

The evidence is there for all to see. Our Australian universities are on a hiding to nothing by surrendering to the bullying tactics of a small group of feminist activists and agreeing to get involved in the criminal justice business. The sensible majority need to speak up and give them the courage to withstand this dangerous nonsense.

Bettina Arndt trained as a clinical psychologist before becoming one of Australia’s first sex therapists. She then had a long career as a social commentator mainly on gender issues. Her new book, #MenToo, will be published in December. You can follow her on Twitter @thebettinaarndt