PORTLAND, Ore. — Weeks of effort by activists to get University of Toronto psychology professor Jordan Peterson booted from his Portland tour stop ultimately failed as he delivered an uninterrupted speech to a packed-house on Monday at the Keller Auditorium in downtown.

Before the event, around 50 protesters gathered across the street to shout at Mr. Peterson’s fans waiting in line. “Say it once, say it again, no excuse for violent men,” they chanted. Many held signs condemning his views on gender pronouns and women. One sign declared, “As many genders as we want.” Another read, “Infinite genders.” 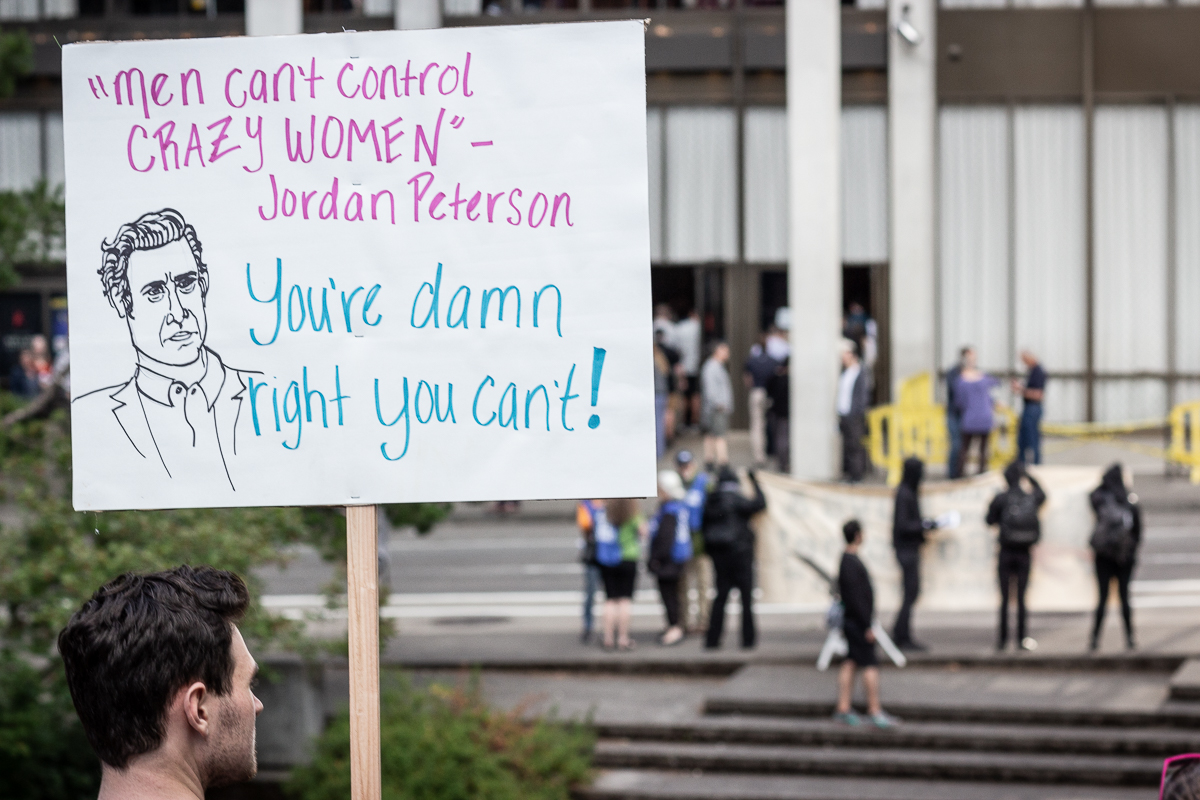 The protest comes at a tense time in Portland as activists have shut down the local Immigration and Customs Enforcement (ICE) office nearby for nine straight days. I recognized many of the same protesters, which include self-described anti-fascists, socialists, and anarchists.

“We’re out here because there’s a classist, misogynistic, transphobic bigot named Jordan Peterson getting paid to spread his hateful ideology here in Portland,” shouted Rosemary Dodd through a megaphone. “We’re outraged by his words, yes. But we must also be outraged by a system where these disgusting ideas find an echo.” Ms. Dodd is a 27 year-old member of the local chapter of the Socialist Alternative who helped organize the protest with the Portland Democratic Socialists of America. 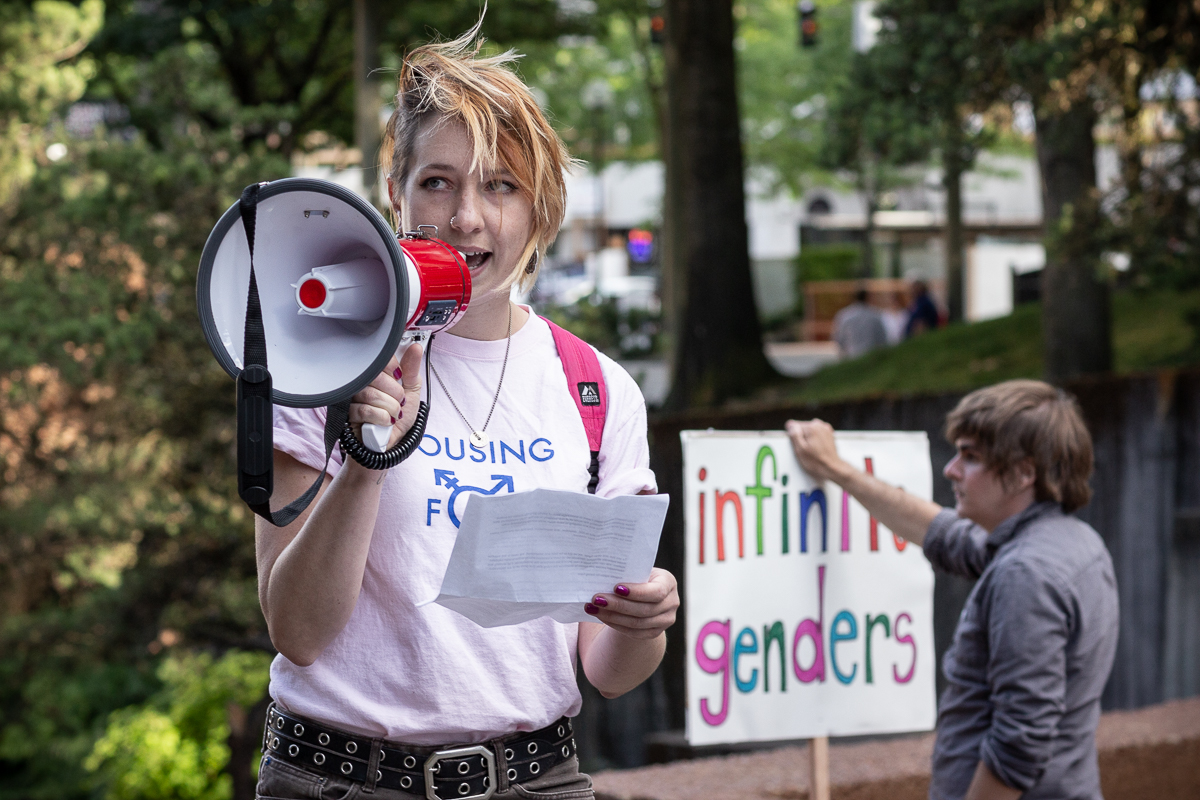 Rosemary Dodd, a socialist activist, delivers a speech against Jordan Peterson outside the Keller Auditorium

Inside, Mr. Peterson caught glimpses of the protest on a mobile phone while waiting backstage. “These are the brave masked people?” he asked. The professor is in the middle of an international tour to promote his best-selling book, 12 Rules for Life: An Antidote to Chaos. Until his Portland visit, only a handful of protesters combined have demonstrated across his nearly two-dozen tour stops across the U.S., Canada, and U.K.

YouTube host Dave Rubin, who is the opening act on the tour, isn’t surprised that Portland, a city infamous for its progressive politics, is the first place to mount an organized protest. Even Portland Mercury, a popular local newspaper, encouraged its readers to resist and protest Peterson. During Mr. Rubin’s first visit to the city last year, when he came to speak on a panel at Portland State University, he was also protested by antifa. 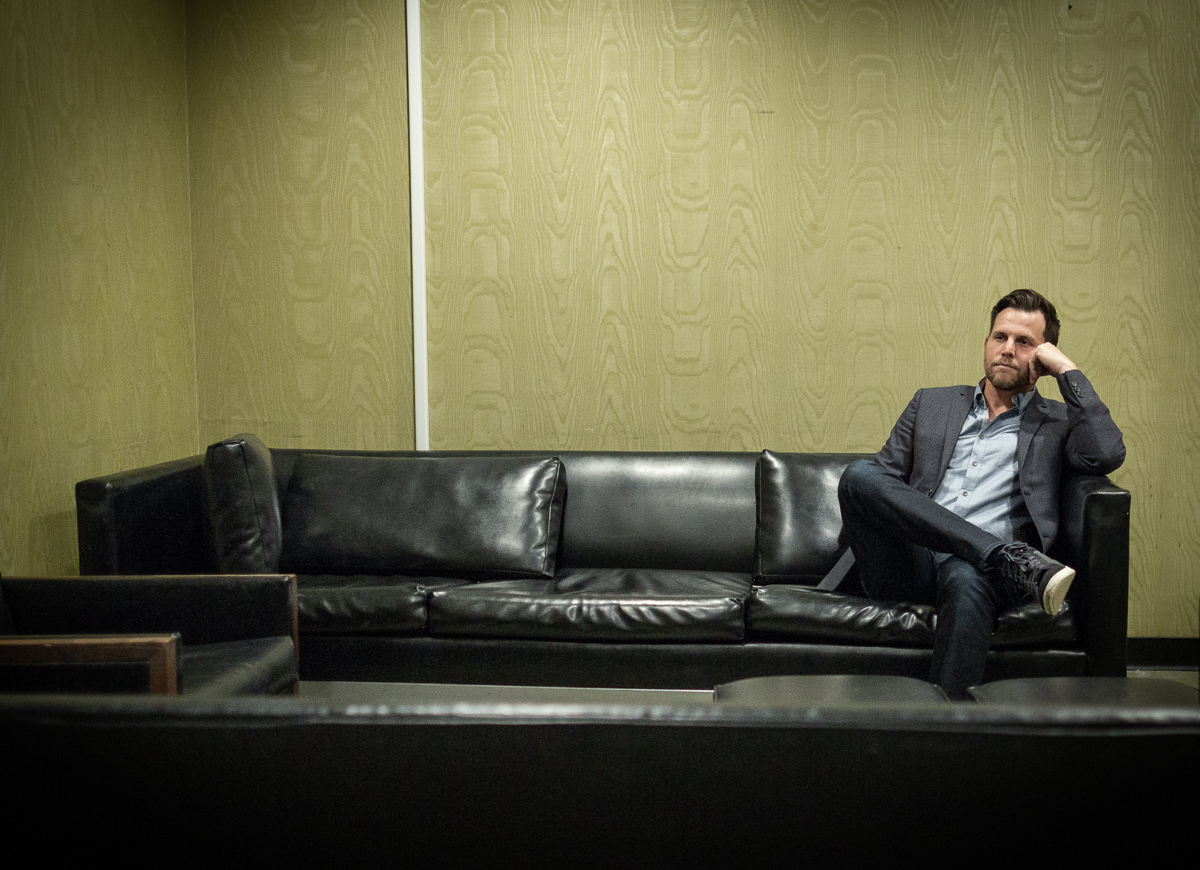 Efforts to prevent Mr. Peterson speaking began in May, and they appear to offer evidence of a movement that uses big rhetoric and threats as a cover for its small membership. An anonymous group calling itself “Humans Against Hate” first threatened the Keller Auditorium’s owners with show disruptions if they didn’t cancel his event. The group accused him of using “dog-whistle calls” to violent misogynists in an open letter. The venue’s owners, made up of a group of publicly-owned agencies, refused to budge. Heather Back, a communications and policy manager for Metro, one of the owners, told me they are “legally prohibited from judging the content of a performance.”

Humans Against Hate promised to disrupt the owners’ meeting in early June but when I attended, not a single demonstrator was there. A security guard hired in the event of protest stood outside, staring at the ground.

Even with the negative press surrounding some of Mr. Peterson’s more controversial views, such as his opposition to equity programs or his support for socially “enforced monogamy,” he remained skeptical from the beginning that any Portland group would mobilize enough people to shut him down. “Obviously they weren’t successful, except in generating 50 people who were protesting against things that anyone in their right mind would protest,” he said. “You don’t like violent men. Okay, fine. You don’t like poverty either. Who likes violent men and poverty?”

Shortly before he took the stage, I had an opportunity to look at the faces in the audience while the lights were still on. The 3,000-seat theatre was almost entirely filled—not with angry young white men as I was led to believe by protesters but a diverse crowd that included many women and people of color. 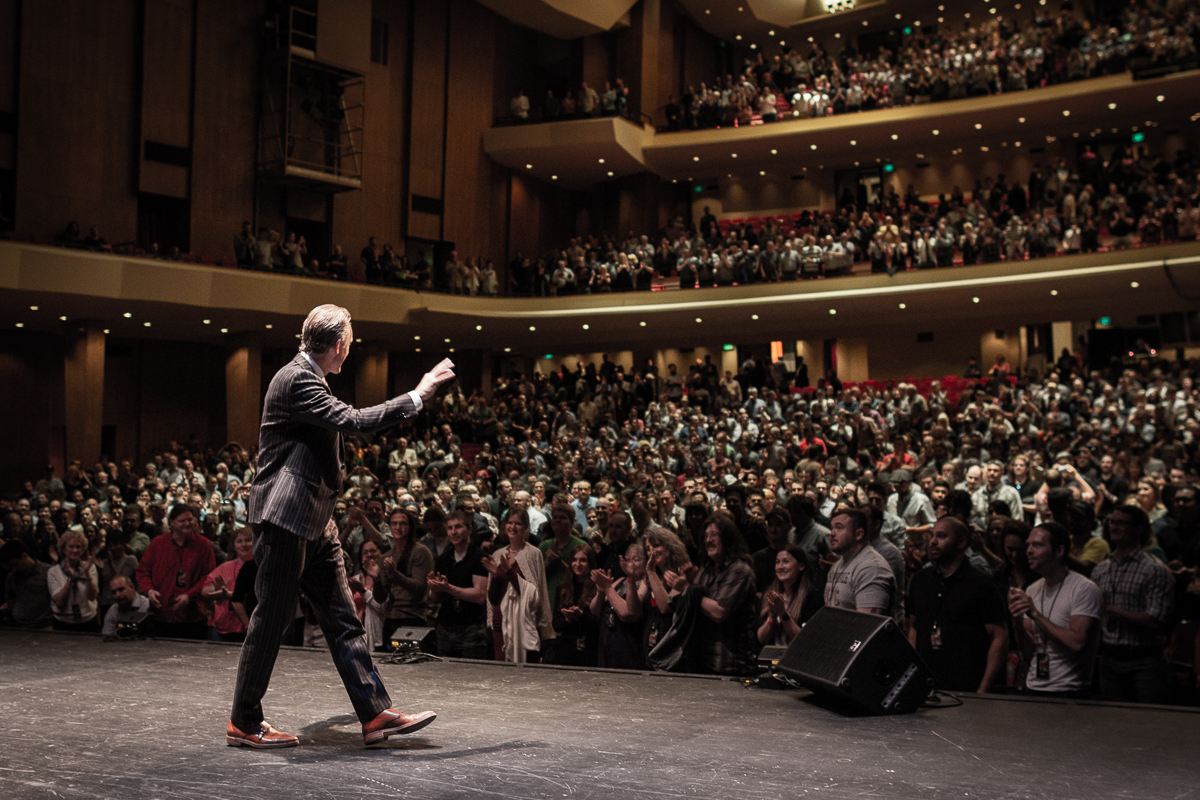 This surprised and bothered some of the protesters I spoke to. “All of the women here, I don’t really understand why anybody would support somebody who is—I mean, it’s just disgusting,” said one demonstrator who declined to give her name.

While Mr. Peterson’s most vocal critics at the protest were women, some of his most ardent defenders I spoke to were also women. Ashley Miller, a 33 year-old approached me shortly before the show began. Covered in tattoos and piercings, I thought she was a protester about to confront me (I earlier photographed some camera-shy demonstrators). I was wrong.

“I’m bisexual, biracial, queer, Jewish,” she began, “but it’s not something that’s important to me.” She said the protesters accuse others of being transphobic, sexist, or racist in order to disengage from dialogue. “I’m a little concerned about how people are becoming deeply divided because of that.” She had traveled from Seattle to see Peterson speak for a second time in less than a week. 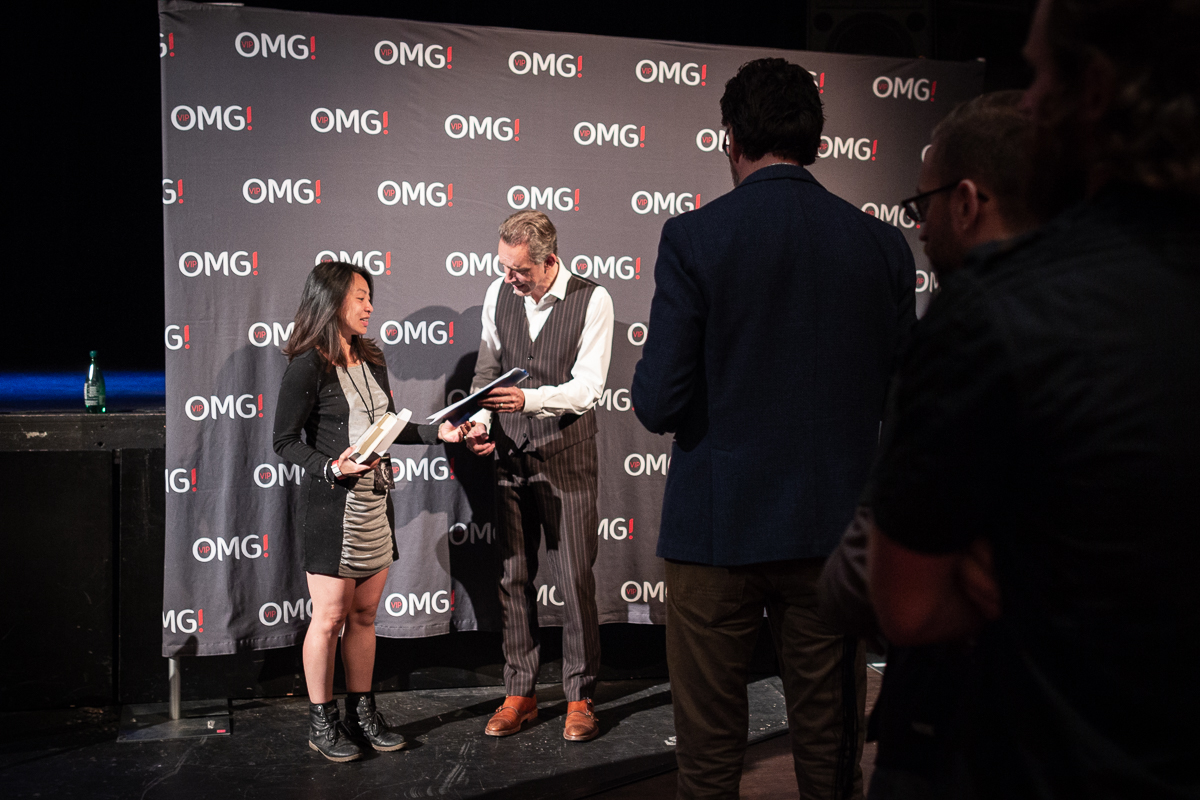 A fan meets Jordan Peterson after his lecture

After the show, I caught up with Mr. Peterson and briefly showed him some of the protest signs from outside. His response? “It’s perfectly within the rubric of their rights to invent whatever delusional fantasies they feel like inventing and living in. It has nothing to do with me.” Our interview was cut short when he was called to return to the auditorium, where hundreds of fans were waiting in line to meet him.

Humans Against Hate could not be reached for comment. Socialist Alternative Portland declined to comment. Portland Democratic Socialists of America did not respond to inquiries for comment.

All photos by Andy Ngo.

Andy Ngo is a graduate student in political science at Portland State University and a subeditor at Quillette. Follow him on Twitter @MrAndyNgo