Another semester, another academic publishing scandal, complete with calls for penitence and punishment. This time the catalyst is “The Case for Colonialism,” a “Viewpoint” editorial in Third World Quarterly. In this essay, Bruce Gilley argued that “it is high time to question [the anti-colonial] orthodoxy. Western colonialism was, as a general rule, both objectively beneficial and subjectively legitimate in most of the places where it was found, using realistic measures of those concepts.” Gilley’s article has since been withdrawn due to “serious and credible threats of personal violence” made against the journal’s editor. This obviously troubling development should make us wonder: just what evil would this article have brought about if not withdrawn? The Streisand effect is in full display here. The article – detailed, abstruse, and not always beautifully written – has no doubt been far more widely read than it would have been without the controversy. 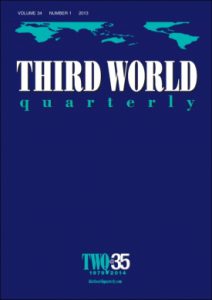 The publication of “The Case for Colonialism” faced criticism on several grounds: it was offensive; it was unscholarly; the journal did not follow its normal procedures in publishing it (now officially disputed by the publisher); the journal is a special venue for anti-colonial perspectives. This last one is particularly reminiscent of last spring’s Hypatia affair. As in that case, we should be skeptical of appeals to “academic standards” in political disciplines. Often such standards are simply substantive moral or political stances for which the field provides a “safe space”. In a representative attack on the article’s scholarly quality, Sahar Khan says that “the article seems like a bad joke. Can someone, a scholar no less, actually make a case for colonialism?”. A Change.org petition asserts that its “goal is to raise academic publishing standards and integrity,” but then calls on Third World Quarterly‘s editors to “apologize for further brutalizing those who have suffered under colonialism”. And a letter of resignation from some members of the journal’s editorial board even suggests that “caus[ing] offence and hurt . . . clearly violates [the] principle of free speech”.

Notably, the “The Case for Colonialism” used a method called counterfactual history to arrive at some of its conclusions. This method is controversial, but since every philosophy of causality and explanation integrates counterfactuals, or “what-if” statements, in some way, it arguably deserves a significant role in historical analysis. Few of the attacks on the article specify where it goes wrong either in actual history or in counterfactual speculation, though Nathan J. Robinson at Current Affairs has attempted to do so. In particular, contradictions Gilley points out in the anti-colonial literature (p.3) seem to have gone unaddressed. Gilley could certainly have addressed at greater length, or with greater sensitivity, the actual history of murder and deprivation that accompanied colonialism. However, accusations of “whitewashing” tend to take for granted the falsity of his conclusion, which is that, counterfactually, a history without colonialism would have been even worse.

But what if the critics are right, and the article is no good? Is the furore warranted? Should the article have been retracted even without the threats, or is it enough, as Noam Chomsky thinks, to rebut it? How should we balance academic freedom and academic quality? Jacob T. Levy has argued persuasively that the concept of free speech proper does not have a place in academic discourse. In assessing, for example, the merits of a plagiarism case, colleges and universities do not at all take an offender’s speech interests or rights into account as a factor. Is there any other justification for the article’s existence?

We can distinguish two kinds of critiques of a paper. One claims that the paper’s basic project is fundamentally misguided; another suggests that it has stumbled, somehow, in trying to carry that project out. When the second critique applies, but not the first, the critic will be able to say things like: “A good paper on this topic is…” or at least “A good paper with this thesis would proceed by…”. None of Gilley’s critics have said anything of the sort. So it’s fair to infer that they all feel that part of the paper’s problem is that the whole idea of making a “case for colonialism” is misguided.

This conclusion should not surprise us. After all, Gilley himself noted that anti-colonialism is an animating assumption of the disciplines in which his paper would normally have circulated. (From his point of view, this might plausibly be because these disciplines eschew the method of counterfactual history.) What is surprising is the unease of Gilley’s critics at their animating assumptions being questioned. In many academic disciplines, an essential part of learning “theory” is developing an acquaintance with precisely these sorts of foundational disputes. New subfields, from string theory to evolutionary psychology to experimental philosophy, face rigorous audits for coherence, robustness, falsifiability, and so forth. The response suggests that the pedagogy of anti-colonial theory does not involve such a process.

So even if Gilley’s paper does as little to support its conclusion as its critics seem to think, it nonetheless might have provided a valuable service to the anti-colonial literature, by making a case at all. That would provide anti-colonial academics something to point to and say: “Here is the best case for colonialism available. It’s very bad, and so it’s reasonable to conclude that the case against colonialism is much stronger than the case for colonialism.” This helps actually to buttress the field’s theoretical foundations, especially as a pedagogical matter. Nor will it do for critics to say simply that the paper could find a place in a discipline with different foundations. If we hope to achieve with our intellectual inquiry even roughly objective knowledge of reality, we must go beyond having a field that assumes P and a field that assumes not-P – we must investigate whether or not P is actually true.

Much can be learned, too, in the examination of a bad argument: where exactly it goes wrong, why perhaps its author was unable to see its flaws. In seeing why a case for colonialism is impossible, a student might learn more general lessons about putting together good cases for other conclusions – including, of course, cases for anti-colonialism. Of course, there are limitations to this; correcting genuine historical inaccuracies doesn’t really help anyone with anything. But if the paper does have other problems, more specific and better-worked-out criticisms than “academic standards” or “fails to engage relevant literature” should be made (which standards? which arguments from which papers?), in order to provide a teaching moment for readers and for researchers.

One good model for aggregating many people’s expressions of their beliefs is a prediction market. Halfway between a stock exchange and a sports bookie, a prediction market allows investors to buy and sell shares which pay out if certain real-world eventualities come to pass. In such a market, if one is reasonably certain of something relevant which all other participants find highly unlikely, one can invest in that belief with little risk and with great possible reward. For example, on election night last November, PredictIt.org shares in a Donald Trump victory were briefly sold for under ten cents each, for a payout of one dollar; shares in a Hillary Clinton victory correspondingly cost over ninety cents at the same moment, for the same payout.

What’s worth emulating about a prediction market is that it turns the expression of unpopular beliefs into a low-risk, high-reward enterprise. In the real, social world, it is often very costly to dissent from a dominant view: friendships can be lost and careers ruined. But it is not costly at all to assent to a dominant view; on the contrary, conforming in this way is helpful and often necessary both socially and professionally.

Without such a process occurring, outsiders will be unable to look at the market and garner any reliable knowledge about the state of the world. Normal incentives would determine that the dominant view is overwhelmingly expressed, even if it is only weakly preferred by most investors. Since the development and dissemination of reliable knowledge is one of the primary purposes of the academy, it is academically crucial for rationalization to take place. In the case of “The Case for Colonialism”, where other scholars have called not just for the retraction of the paper but for the revocation of its author’s degree, it’s clear that the unpopular view was incredibly expensive to express. Such a discipline cannot be a systematically reliable source of knowledge for the outside world.

Even granting for the sake of argument that “The Case for Colonialism” failed to meet academic standards, and that there are no “free speech” interests at play germane to the article’s publication, there are at least two good reasons academics and academic journals should be hesitant to call for retraction. Firstly, articles like this promote dialogue about disciplines’ fundamental assumptions. Such questioning is necessary for the health of any academic field, and for fields that are up to the task, can provide legitimacy in the eyes of the rest of the academy – and of the public.

Secondly, in order to accurately estimate how likely various beliefs are to be true, a system must first either lower the cost or vastly raise the reward of expressing unpopular beliefs. Making it cheap to express unpopular opinions makes it easier for outsiders to gauge what the average viewpoint of a group of scholars might be. And when an article causes a controversy, calls to uphold a field’s standards should be met with some skepticism, especially when those standards would prohibit the publication of the unpopular opinion in the first instance. After all, if academic freedom doesn’t mean the protection of unpopular and disruptive minority views, what could it possibly be for?

Oliver Traldi is a graduate student in philosophy at the University of Notre Dame.