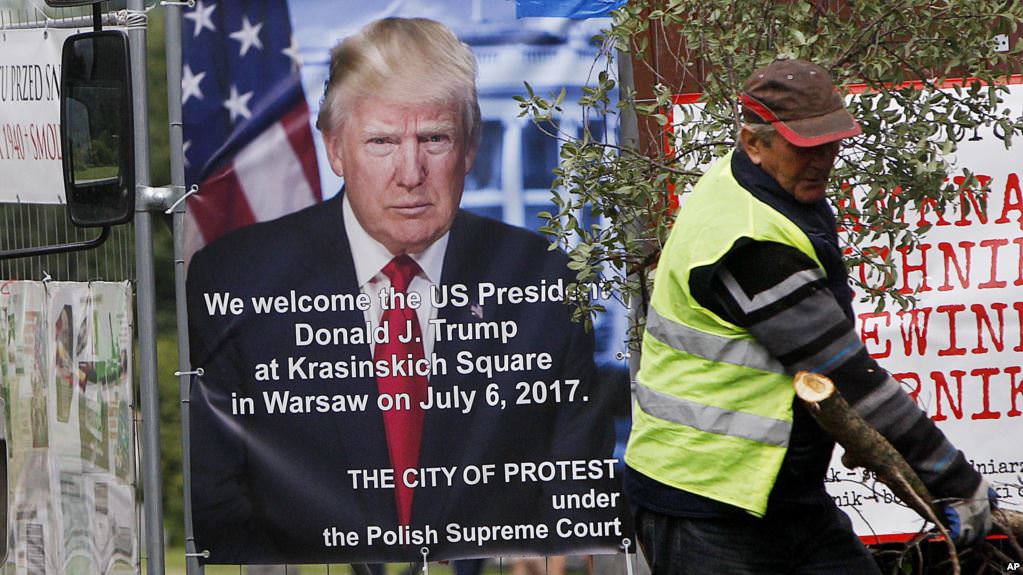 The reaction to Donald Trump’s first major speech in Europe reminds me of the old Jewish joke in which two men ask a rabbi to resolve a dispute. After listening to the first one, the rabbi says, “You’re absolutely right!” Then the second man makes his case, and the rabbi replies, “Yes, you’re quite right!” The rabbi’s wife chimes in: “That makes no sense—how can they both be right?” The rabbi ponders her words and says, “You know what? You’re right, too!”

Responses to Trump’s Thursday speech in Warsaw, Poland, which focused on the need to preserve and defend Western civilization and its values, have been sharply polarized along partisan lines. On the liberal side, Sarah Wildman in Vox, Peter Beinart and James Fallows in The Atlantic, and Jeet Heer in The New Republic have argued that it was at best an appeal to tribalism and at worst practically an alt-right manifesto, full of dog-whistles for white nationalists. Conservatives, even Trump’s harshest critics such as Jonah Goldberg, David French, and William Kristol, have mostly praised the speech; National Review editor Richard Lowry called it “a triumph.” Many have also mocked what they see as the left’s bizarre and hysterical response. The Federalist’s David Harsaniy even sees the outcry as proof that “equating Western civilization and values with fascism and racism, once relegated to the leftist fringe, is increasingly prevalent among liberals.”

You might hear 'family, freedom, country, and God.' But they hear fascism. https://t.co/6eaPU6jGtt

To be sure, labeling Trump’s speech an alt-right screed is a fairly absurd exaggeration, and to spot coded allusions to Leni Riefenstahl because it mentions the word “will” five times and the word “triumph” once borders on paranoia. (The main speechwriter was Stephen Miller, the Trump adviser whom some have accused of having white nationalist ties—though it’s worth noting that Miller disputes the claim, and that he also happens to be Jewish.) Much of what Trump said could have been said by any other president, though probably with more eloquence and without cringeworthy asides like “That’s trouble. That’s tough” as a comment on Poland’s 1939 invasion by the Soviet Union and Nazi Germany. It had some very strong passages emphasizing Western and NATO solidarity and celebrating the Polish—and human—battle for freedom.

But I can also see why parts of the speech—especially in the overall context of Trump’s visit to Poland—would set off alarm bells for liberals who are not extreme or anti-Western. And while it’s true that rejection of American and Western culture as fundamentally oppressive and racist has been a creeping sickness in progressive circles, the liberal critiques of the Warsaw speech—some of which contrasted Trump’s rhetoric to Ronald Reagan’s “city on a hill” vision of America as “a moral beacon for the world”—cannot be reduced to hatred of Western civilization.

No, of course it’s not racist or white nationalist to celebrate Western civilization, or recognize the Western—European and North American—roots of liberal democracy. Trump’s ode to the West and the “priceless ties that bind us together as nations, as allies, and as a civilization” mostly deserves the plaudits, despite being a little heavy on faith (“works of art that honor God” describes a fairly small portion of Western art after 16th Century). This part of the Warsaw speech is a fine summation of the things that make modern Western culture unique:

We pursue innovation. … We strive for excellence. … We treasure the rule of law and protect the right to free speech and free expression. We empower women… And we debate everything. We challenge everything. We seek to know everything so that we can better know ourselves. And above all, we value the dignity of every human life, protect the rights of every person, and share the hope of every soul to live in freedom. That is who we are.

While Beinart and other critics charge that “Western” is code for “white and Christian,” Lowry retorts, “This is bizarre, given that countries everywhere can ‘Westernize,’ or adopt the norms and practices that were first adopted in the West and are uniquely suited to human flourishing.” And he’s right.

But here’s the problem. Trump’s speech was markedly bereft of any references to Western (or Western-born) values as a universal good: Not one mention of freedom-seeking aspirations in non-Western countries, and only one brief positive mention of immigrants “who share our values.” Indeed, fellow National Review writer French hails the speech precisely for “rejection of universalism,” which he sees as a harmful fiction embraced by earlier leaders from both parties—notably Barack Obama and George W. Bush—and responsible for disastrous foreign policy blunders, from Iraq to the “Arab Spring.”

French has a point; assuming that oppressed people everywhere will eagerly embrace liberty and tolerance if given a chance is at best naïve. (For the record, I questioned such optimism back in 2005 in a review of Nathan Sharansky’s democracy-building manifesto, The Case for Freedom). But to reject universalism altogether is to throw out the baby with the bathwater. It means dismissing the very real impact of Western, and American, values across countries and cultures; one could even argue that it means rejecting a core part of those values. And it leaves us with openly amoral realpolitik as our only foreign policy guide. A vision of America and the West as the world’s moral beacon may be too idealistic, but what does Trumpism offer? A “clash of civilizations” in which the West dominates because it’s the strongest?

It is also true that, as French points out, one cannot defend liberal values without making it clear that their source—Western civilization—is worth defending. But this is where we get to the passages in Trump’s speech that probably caused the biggest backlash:

Americans, Poles, and the nations of Europe value individual freedom and sovereignty. We must work together to confront forces, whether they come from inside or out, from the South or the East, that threaten over time to undermine these values and to erase the bonds of culture, faith and tradition that make us who we are. … If left unchecked, these forces will undermine our courage, sap our spirit, and weaken our will to defend ourselves and our societies.

The fundamental question of our time is whether the West has the will to survive. Do we have the confidence in our values to defend them at any cost? Do we have enough respect for our citizens to protect our borders? Do we have the desire and the courage to preserve our civilization in the face of those who would subvert and destroy it?

There is little doubt that Trump was referring to immigration and the refugee problem, while speaking in a country whose leaders have steadfastly resisted European Union pressure to take in refugees. The benign interpretation is that he was stating plain facts increasingly recognized by plenty of people who are not fascists, white nationalists, or even conservatives: That the recent influx of refugees, mostly from countries with a strong presence of Islamic radicalism, poses serious problems for security and stability in Europe. (It is also widely recognized that the political establishment’s failure to address these issues has spurred the rise of Trump-style populism.) The less benign interpretation is that he was pandering to a mentality that views all Third World immigration as invasion by dark hordes from the South leading to the destruction of European civilization.

The actual words of the speech are compatible with both readings—perhaps, as conservative commentator Jay Cobb suggests, intentionally as a way to appeal to different audiences. But one can acknowledge the problems facing Europe due both to the mass movement of refugees and to the more general difficulties of integrating Muslim immigrants, and still find Trump’s apocalyptic rhetoric alarming. What does self-defense “at any cost” mean when it comes to addressing complex issues of cultural change, migration and domestic threats, rather than resisting military aggression like the Polish heroes Trump invoked as a parallel? Would deporting immigrants from demographic groups most likely to produce terrorists—or even native-born children of immigrants at high risk for radicalization—be an acceptable cost? What behavior by citizens would be qualify as subverting the national spirit and the will to self-defense, and how will such behavior be dealt with? Talk of collective will and internal subversion is generally associated with authoritarian populism, not liberal democracy.

Some see Trump’s support for illiberalism as a natural outcome of conservative views. In his commentary in Quillette, neo-realist foreign policy scholar Sumantra Maitra chides writer and political consultant Molly McKew for lamenting that Trump’s visit to Poland was a boon for “illiberal democracies”; Maitra notes that “if a democracy now needs to be a tool for spreading liberalism, conservatives are by definition, not democratic.” But ideological liberalism in the American sense is not the issue: liberal democracy is defined by individual rights and liberties and by checks on government powers that curb majority rule.

While Poland has a proud tradition of defending its freedom, there is broad agreement that it has been drifting in a disturbingly authoritarian direction—quite apart from its stance on immigration—under the stewardship of the populist Law and Justice party (PiS), which came to power in late 2015. Law and Justice passed legislation that hobbles Poland’s highest constitutional court and tightens government control over public television and radio, which account for a large share of the media market. (Interestingly, Law and Justice combines social conservatism with left-wing social policies, retreating from Poland’s post-communist free-market policies to promote a more generous welfare state.)

A controversy earlier this year over a Warsaw theater’s production of a play called The Curse, which lampoons the Catholic Church, illustrates these authoritarian trends. In February, Polish prosecutors launched an investigation under a blasphemy law that makes offenses to religious feeling punishable by up to two years’ imprisonment. (There are also possible charges of incitement to the murder of Law and Justice leader Jaroslaw Kaczynski—because of joke about a law that treats any mention of assassinating a politician as incitement.) Meanwhile, an editor for the public TV channel Kultura was sacked for airing a report on the play.

Poland’s blasphemy laws—under which a pop singer was fined nearly $1,500 in 2012 for disparaging the Bible in an interview and an artist was sentenced to six months in jail in 2003 for an artwork in which a photo of male genitalia was displayed on a cross—are also a reminder of another problem with Trump’s speech: the clumsy attempt to stitch together Enlightenment values and religious conservatism. If we “debate everything” and “challenge everything,” doesn’t that undermine the “bonds of … faith and tradition”?

There was one other notable moment in Trump’s speech: his call for Russia to “cease its destabilizing activities in Ukraine and elsewhere, and its support for hostile regimes—including Syria and Iran.” This passage has been praised as evidence of Trump’s willingness to be tough with Vladimir Putin. But in his next breath, he invited Russia to “join the community of responsible nations in our fight against common enemies and in defense of civilization itself,” with no other conditions such as lifting censorship or allowing free and fair elections. As McKew puts it:

This signal to Putin that there is a common “civilization” to which the U.S., European nations and Russia all belong—absent the usual rhetoric of democracy or shared Western values—is a critical gesture.

Between that and Trump’s attacks on the American news media during a joint press conference with Polish President Andrzej Duda, Trump’s praise for “Western values” rings hollow.