From the perspective of ‘Social Justice Warriors’, resistance to their demands—no matter how respectable the speaker or moderate the tone—is further evidence that they are fighting the good fight. For many of them, the basic format of moral progress has from day one been taught as follows: the status quo has gaping moral blind spots, the amelioration of which will come only after, and by virtue of, energetic protest.

As Steven Pinker has argued, however, moral blind spots have until now been relatively low-hanging fruit, despite their being unacknowledged by most people at the time. Indeed, most intellectual pursuits begin with low-hanging fruits, with objects of inquiry whose discovery does not necessarily require an aberrational stroke of unprecedented genius, but rather someone with an impressive intellect and time on their hands. In mathematics, for instance, many foundational concepts were co-discovered independently in different parts of the world. History reveals that foundational advances are few, and that subsequent to them spawn—in hydra-like fashion—many more, often arcane corollary branches of inquiry.

In accordance with this general characteristic of knowledge acquisition, contemporary philosophy is similarly unlikely to yield another Plato, Aristotle, or Descartes. We have every reason to suspect that there is no impending intellectual giant who will set the philosophical tone for the next millennium. Such intellectual pursuits will henceforth be more specialized and boring than they once were. The spectacle of genius is over; the prodigious polymaths of former times are gone. Eccentrics without university positions are no longer going to have the meteoric impact they once had. Instead, shifts in our state of knowledge are likely to be slow, imperceptible, and boring – most of them will be carried out in esoteric journals and rather uninspiring books. As it is for most epistemic pursuits, so too for morality.

Shortly subsequent to the moral revolution of the Enlightenment, it did not require a great expenditure of mental energy to recognize basic moral contradictions at work in society, such as freedom for whites, slavery for blacks; the franchise for men, disenfranchisement for women; dignified social treatment for whites, undignified social treatment for blacks. These were obvious contradictions, long before their amelioration arrived. The fruit was there for the picking—or, at least, it was for those who cared to look.

However, there comes a point in the chain of development where moral answers are no longer so obvious and low-hanging—where tedious epistemic training in conjunction with protracted periods of debate and collective deliberation might in fact be necessary for their discovery. How to clinically manage gender dysphoria, for example, is not as clear an issue as the immorality of slavery. Such an issue requires not shrill protesting, but moral and intellectual clarity. Given the increasing absence of low-hanging fruit, there is strong reason to believe that solutions to future moral problems will not be so immediately clear as to warrant the kind of moral certainty displayed on college campuses in recent times. That an increasing number of self-described progressives are expressing skepticism over recent social justice causes is evidence of the morally ambiguous nature of these causes.

Unfortunately, communicating this fact to social justice campaigners has not proved easy. In the minds of such people, resistance—particularly by older people of a dominant demographic—can itself serve as further vindication. Vindication, that is, of their being on the right side of history. And who can blame them? This image of resistance to change falls squarely into the format we have so reflexively lauded for decades. 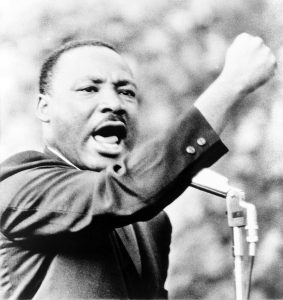 But we cannot replay the scenes of 1960s protests every generation and assume that the movements most closely resembling them are also the most morally efficacious. The moral disputes of Martin Luther King’s time are not analogous to those of our own times, nor are the solutions so easy to articulate. This is partly because King was dealing with a problem that was more obvious and easily addressed than, say, whether or not we should diminish the preponderance of white men in university curricula. He did not, therefore, depend on the arcane speculations of continental philosophy to make his point; rather, he appealed to the basic and universally intelligible idea that skin color is an arbitrary basis on which to determine societal treatment.

Those committed to the social justice movements should accommodate themselves to the fact that we do not live in a time possessing nearly as many grossly obvious moral blind spots as there once were, particularly in the civic domain. Because of this increasing moral ambiguity, what injustices remain today should be discussed soberly and in good faith. For many open-minded people, it is not remotely clear that mere discussion over the legitimacy of trans-racialism, for example, constitutes a kind of violence.

I think what the Hypatia debacle boils down to is that even in the niche group of feminist philosophy, there will still be no accountabiliy

But what if I am wrong in my judgment of contemporary social justice causes? Let us consider for a moment that I am in fact a chronologically-biased brute, whose moral worldview has been unduly shaped by mere historical circumstance. Perhaps the social justice warriors offer a perspective to which my limbic system is not amenable. After all, we are all guilty in some measure of this conservative disposition. In all of us there dwells a basic, non-rational tendency toward continuity—something perhaps borne of our evolutionary history; a vestige of a time when reverence of, and reference to, the customs of our ancestors was necessary. All rational, morally-interested people should do their best, therefore, to bear in mind this mindless will-to-continuity inherent to our psyche.

With that said, however, it is not clear that this primordial will-to-continuity is the operative distinction between today’s social justice warriors and their detractors. In fact, one cannot help but notice that many contemporary detractors of social justice ideology are quite radical (à la the neutral Latinate sense of the word) in the way of moral progress. It is not uncommon, for instance, to witness prominent anti-SJW voices with deep moral seriousness call for the total abolition of factory farming (a sentiment with which I agree).

Similarly, such people are often sympathetic to the view that richer countries are morally obligated to donate nigh-saintly proportions of their income to the world’s poor (i.e. effective altruism). Delve deeper into this sphere of thinkers and you’ll even see some advocate for the radical exploration of conscious states through LSD, and recommend that we attempt to delete our sense of self through meditative practice. It would take an enormously elastic definition of ‘status quo’ to believe that these are the ideas of prevailing orthodoxy. A brief review of this intellectual landscape reveals that what we are witnessing in this generation is not a battle between an old, stuffy conservative establishment on the one hand, and a fresh, energetic group of clear moral thinkers on the other. As far as a commitment to novel thinking goes, both are at parity.

This progressive aspect of anti-SJWism is what fundamentally distinguishes today’s purported struggle for ‘social justice’ from those of times prior. It is no longer the status quo vis-à-vis proponents of change, but rather two contending forces of change. Such a fissure was perhaps inevitable, for we no longer live in a society over which a conservative disposition prevails. Our civilization has, by and large, accommodated itself to, and is self-conscious of, the fact that change is a fundamental characteristic of our epoch. The debate that rages is no longer one of, “Should things change?” but rather, “In what direction should things change?”

With respect to this latter question, two principal views are currently at odds. The first is that of the Social Justice Warriors, who hold that Enlightenment ideals and the pursuit of truth are merely disguised instruments of power—that, moreover, these ideals steamroll over the particular lived experiences of marginalized groups. Social Justice Warriors believe that radical cultural parity, not Enlightenment universalism, should constitute the fundamental ideal toward which humanity must strive. Against this is the second view, which runs more or less as follows: particularized forms of identity politics are an artefact of primate psychology—an unnecessary and even potentially dangerous one at that. At the core of this second view is the idea that all humans can be held to universal standards: that wrong in the West is identical to wrong elsewhere—not because such a judgment serves as a cathartic discharge of power, but because well-being and suffering are universal metrics of right and wrong.

In any case, the question of who is right and who is wrong—indeed, whether the prospect of right and wrong exists altogether—can only be solved through debate. Immovably wedding oneself to an ideology anchored in group identity will send us further and further in the direction of zero-sum political contests, the principal effect of which is the breeding of mutual resentments and hatreds.

Just as other epistemic pursuits have lost their former revolutionary spectacle in the name of incremental progress, so too should Social Justice Warriors acquiesce to the fact that simply replicating the theatrics and demographic dynamics of the 1960s protests does not guarantee moral progress. Many moral issues are becoming more difficult and intricate than they once were, and our attitude toward these moral issues should reflect this change in circumstances. Nevertheless, there does exist a place for the moral concerns of social justice campaigners—but the expression of these concerns should take the form of bona fide dialogue, and not of solipsistic haranguing on university campuses. Granted, for young people, this might not be as fun as sloganeering, but it is the method that best offers us the prospect of moving forward together.

Thomas Varnke is an MA student of Political Thought at the University of Exeter.