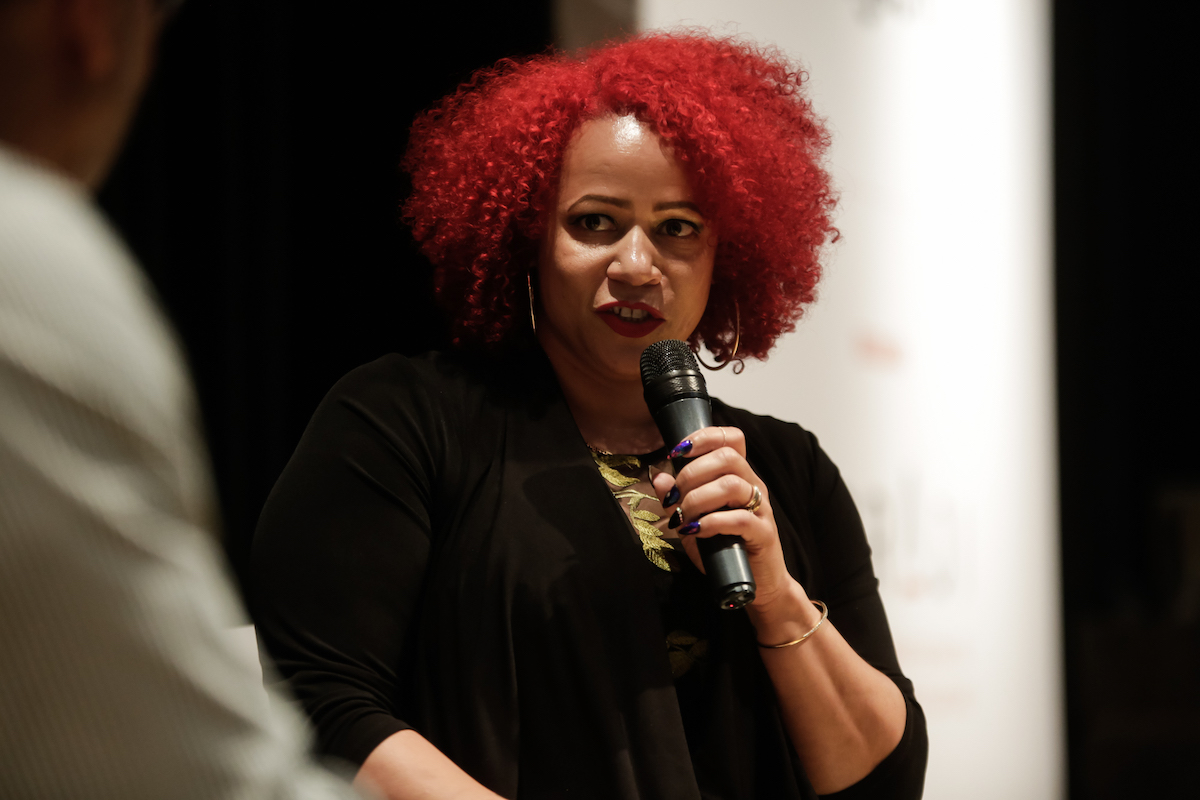 The Pulitzer Center allegedly “raises awareness of underreported global issues through direct support of quality journalism across all media platforms and a unique program of education and public outreach.” Its most prolific donor is Emily Rauh Pulitzer and the Emily Rauh Pulitzer Foundation. Widow of newspaperman Joseph Pulitzer, Rauh Pulitzer is also a major donor to the arts.

In 2019, the Pulitzer Center collaborated with the New York Times Magazine to launch The 1619 Project, directed by journalist Nikole Hannah-Jones. The Project was launched to commemorate the 400th anniversary of the arrival of the first enslaved peoples in the American colonies—for its collaborators, the real birthday of the United States of America. Included as part of the New York Times Magazine in August, 2019, The 1619 Project caused quite a media sensation: copies of the Sunday Times edition in which it was included quickly sold out. The Project rewrites the American revolution as a revolt of slaveholders against the British abolitionists and, in its first iteration, argues that the United States of America should be understood as first and foremost a country founded in defense of the institution of slavery. Against the historical evidence that the British monarchy was not taking anti–Atlantic slave trade positions before 1776, and that the colonists themselves were divided on the issue, Hannah-Jones led a group of writers, scholars, and journalists to dismiss the work of historians of colonial America in order to promote their view of the nation as hopelessly and exceptionally racist.

Just as the editors of Social Text and their colleagues were happy to transgress the norms of the scientific and mathematical communities two decades ago, as shown by the Sokal affair in 1996, The 1619 Project rejects the norms of historical research. However, the New York Times is not a small academic journal, and so the fear of offending the powerful forces, funders, and donors who support the Project through private foundations, has cast a pall over the debate around its findings. The authors of the Project reject all criticism of it: they believe that their findings do not depend on the research consensus and archival evidence sorted through by a scholarly community of historians. Using her new clout and massive audience, Nikole Hannah-Jones led the way in dismissing the accepted scholarship that had been done on colonial America as simply the highly biased work of white males. Lifetimes of careful, empirical research were simply no match for massive foundation dollars backed by one of the largest media companies in the world.

The Project is, on top of everything, a bold attempt to eliminate historical materialism from the teaching and writing of American history while destroying the possibility of solidarity in the American working class. Socialist historians on the pages of the World Socialist Web Site have been some of the Project’s most vocal and astute critics, but their work is not supported or funded by a dense and tangled network of foundations and media elites. The World Socialist Web Site is also one of the few media outlets to have publicized the fact that under pressure from historians, the New York Times and Hannah-Jones quietly abandoned their initial claims that 1619 was the “true founding moment” of the United States. Rather than publish a retraction or a correction of their claim, they quietly softened their thesis on the Project’s website by claiming that the Project’s goal is about centering slavery and the contributions of black Americans in relationship to American identity and narrativized nationhood. No trace of the earlier hyperbolic claims remains on The 1619 Project website, though researchers at WSWS.org retained a copy of the original.

Few stop to ask why such powerful and affluent donors and organizations would be so invested in such a historical project—particularly one that elicited such strong counterarguments from widely respected historians. In its focus on race and the singularity of the history of American slavery, The 1619 Project ignores historical and economic conditions that might make slavery comparable to other forms of exploitation—chattel slavery and serfdom being two premodern examples, and the wage slavery of industrial capitalism being another. In doing so, it furthers a cherished liberal rallying cry of our time: that interracial solidarity among the working class is simply impossible—better not even to try to establish a universalist critique of capitalism. The leading thinkers of The 1619 Project insist that it is race, not class, that has created the essential social and economic fault line in America. Racism is, they argue, a transhistorical fact written into our national character.

This view fits in nicely with the story of American pluralism promoted by postwar private foundation-sponsored ideology: From a pluralist point of view, African Americans are a distinctive and powerful interest group who, because of their particular history, should advocate for themselves and for reparations for the singular suffering they endured under the particularly brutal institution of American slavery—there’s no need for them to join labor unions with other workers whose experiences can never be a perfect match for their own. Other “groups,” Hispanics, Latinos, Asian Americans, Native Americans, and so on, can each advocate separately for their special interests. They just need to come up with competing versions of their historical singularity and find powerful donors who will support them in publicizing their cause.

In the early 1970s, just as the policies of deindustrialization and austerity were being perfected as instruments of class warfare in the United States, Jonathan Cobb and Richard Sennett interviewed the janitor “Ricca Kartides” (a pseudonym) for The Hidden Injuries of Class. The young sociologists discovered that Kartides, who worked as a janitor, felt humiliated every day by his job and its low social status. He was, however, on his salary alone, able to buy his own home so that his children wouldn’t have to live in the building he cleaned. Kartides’s ability to buy a house and support a family on his wages is unimaginable today. The average janitor, now making $24,000 a year, may be ostensibly or formally “equal” to the average CEO, who makes $14 million a year, but that equality seems like a cruel joke played by capitalism and liberal democracy on the working class.

The radical and material difference in average income between janitor and CEO should be intolerable to everyone who is not a capitalist, but the elites who comprise what I call the PMC—the Professional Managerial Class—have internalized the values of the meritocracy so deeply that they cannot see the radical nature of this difference in incomes as essentially different from all other kinds of difference. As social and economic stratification intensifies across the globe, it spawns a series of political crises and shocks that have shaken centrist governments that have promoted neoliberal, austerity-driven policies for the past 50 years. It is in the face of such a destabilized polity, and the ongoing political and economic crisis, that a renewed Left must produce political critique and a cultural program informed by the needs of mass politics. If the Left refuses to produce better, more historically grounded accounts of the past, ones that situate contemporary class and cultural conflict in the context of historical struggles for universal principles of equality, dignity, and emancipation, liberals will not do it for us.

Liberals have abandoned history, because they have to believe they are superior to both elites of the past and the contemporary working class, at the same time. Members of the PMC believe themselves to be virtuous vanguardists, floating above historical forms and conditions, transgressing boundaries and inventing new ways of being and seeing. It is hard to argue with them, because they do not accept debate as a meaningful form of the advancement of knowledge. For them, every conflict is moral, not intellectual or political. In 1996, Sokal failed to stop the proliferation of Americanized ahistorical poststructuralist lines of research in the humanities. I have no illusions about the power of my critique against the dominant tendencies in academia today, but I will not stop criticizing opportunistic forms of anti-historical, and anti-materialist, anti-professional work in my field.

Catherine Liu is professor of Film and Media Studies at the University of California Irvine. She is the author of Copying Machines: Taking Notes for the Automaton, American Idyll: Academic Anti-Elitism as Cultural Critique, and the novel Oriental Girls Desire Romance. This essay is adapted, with permission, from her new book, Virtue Hoarders: The Case Against the Professional Managerial Class, published by University of Minnesota Press. Copyright 2021 by Catherine Liu.

Quillette‘s Toby Young talks to free speech advocate and Brookings Institution Fellow Jonathan Rauch about his new book The Constitution of Knowledge: A Defence of Truth. It’s a follow-up...