A review of The WEIRDest People in the World: How the West Became Psychologically Peculiar and Particularly Prosperous by Joseph Henrich, Farrar, Straus, and Giroux, 704 pages (September, 2020).

A decade ago, researcher and scholar Joseph Henrich, together with psychologists Steven Heine and Ara Norenzayan, published a landmark paper in Behavioral and Brain Sciences titled, “The weirdest people in the world?”1 No, the target of the label “weird” were not the Araweté horticulturalists of lowland South America, where mothers-to-be seek sex with multiple men in the belief that semen from multiple fathers is needed to form the fetus.2 Nor were they the Māori of New Zealand, who have been known to collect and preserve the heads of enemy chiefs they killed in battle as trophies of war, (the mokomokai.) The target of the weird label was Western people. More specifically, Western, Educated, Industrialized, Rich, and Democratic, or WEIRD.

WEIRD was not meant as a pejorative, but as an apt description of this group of psychologically peculiar people, who are distinct from the majority of humanity both now and throughout human history.

Indeed, WEIRD individuals are psychologically peculiar in a number of ways. For instance, if asked the question, “Who are you?” WEIRD people are more likely to describe themselves in terms of their skills, occupation, achievements, and talents rather than by their relationships—they are “a doctor,” “hardworking,” or “a pianist” rather than “Alex’s son” or “Clara’s boyfriend.” Additionally, when judging others, they are typically more likely to assign responsibility to personal characteristics rather than external circumstances. For instance, they are likely to assume that the guy driving recklessly ahead of them on the highway is a complete idiot and terrible driver rather than a worried son rushing his father to the nearest emergency room. While WEIRD people are more individualistic, self-centered, impersonally prosocial, guilt-ridden, and analytical, many non-WEIRD people, from the Chinese to the Ju/’hoansi of the Kalahari Desert, display opposite psychological trends. Non-WEIRD people tend to be more collectivistic, other-focused, more partial to their in-groups, shame-ridden, and holistic thinkers.

The central argument of Henrich and his collaborators is that there has been and continues to be an over-reliance on WEIRD samples in research. And while many of these findings purport to shed light on the human mind and behavior in general, they actually only illuminate the psychology of a small proportion of the human species. WEIRD people make up only around 12 percent of the world’s population and yet over 90 percent of the subjects in psychology research.1 While this methodological critique was and continues to be extremely important for researchers, it left the question of how WEIRD psychology came to be, unresolved. Explaining WEIRD psychology, together with elucidating the key factors that contributed to the scaling-up of small Western societies into large complex states, are the two central focuses of The WEIRDest People in the World. Joseph Henrich addresses them in this sweeping and magisterial book, likely to become as foundational to cultural psychology as the WEIRD acronym he and his colleagues coined a decade ago. 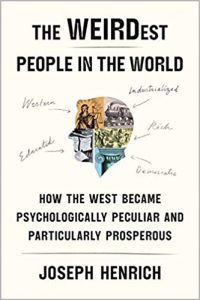 In many ways, The WEIRDest People in the World is a sequel to Henrich’s 2016 book The Secret of Our Success, in which he argues that the distinctly human ability to create, transmit, and acquire evolved cultural systems is the major reason for our success as a species. It also calls to mind similar transdisciplinary books as Jared Diamond’s Guns, Germs and Steel and Steven Pinker’s The Better Angels of Our Nature. All are books that attempt to answer questions as foundational and timeless as that posed by Adam Smith in The Wealth of Nations published in the 18th century—what explains why some countries are poor and others are rich? Such broad foundational questions necessitate bridging the gaps between disciplines since their answers are fragmented across them. Of the many qualities to admire in this book, its interdisciplinary approach is perhaps the most impressive. I imagine that Henrich stands by the contention that the boundaries between disciplines are largely arbitrary and often need to be crossed to make sense of phenomena as complex as the evolutionary history of Homo sapiens. For in arguing his case, he weaves together disciplines as different as evolutionary biology, psychology, and anthropology, among others. This method is altogether befitting of an academic who has not only been a tenured professor in four different academic disciplines, but also has reached across half a dozen or so fields to conduct his cross-cultural research on human evolution.

Henrich takes this approach especially when he argues that the origins of WEIRD psychology began with the fall of the Western Roman Empire and the rise of the branch of Christianity that later evolved into the Roman Catholic Church, which he calls the “Western Church.” During the period between about 400 and 1200 CE, the Western Church began gradually dismantling intensive kin-based institutions such as clans, kindreds, and segmentary lineages, which were typical of most human societies then and throughout human history. With the disbanding of these institutions came the outlawing of norms associated with them such as polygamy and cousin marriage. The Western Church began promulgating a new set of prescriptions dealing with marriage, family, identity, and inheritance, which Henrich collectively refers to as the Marriage and Family Program (MFP). The MFP inadvertently encouraged the creation of associations such as guilds, universities, and confraternities, which bound people together based on shared interests, beliefs, and skills, rather than kinship ties. Henrich argues that the rise of these more non-relational institutions in Europe created a novel environment to which these populations psychologically adapted. This cultural adaptation strongly influenced the psychology typical of WEIRD people today.

The way in which Henrich examines psychological variation through the lens of kinship intensity, meaning the strength of kin-based institutions in one’s society, provides a more direct approach to understanding mind and behavior than more abstract concepts like individualism and collectivism, or tightness and looseness. This is because kin-based institutions and their associated norms are more grounded in our evolved psychology and are primary to human social life. Additionally, the importance of these norms and institutions reverberate through multiple layers of society from the individual to the cultural group.

Henrich presents data that testify to the influence of kinship on human psychology. For example, on average, cultures with high kinship intensity relative to those with low kinship intensity possess psychological trends that are opposite to those in WEIRD societies. These include the prevalence of shame rather than guilt, in-group loyalty rather than universalism, nepotism rather than impartiality, and holistic rather than analytic thinking.

Beyond this, Henrich argues that kinship intensity does not just describe or predict psychological variation, it explains it. This is because changes in kinship intensity shift incentive structures in ways that promote certain behaviors and cognitive patterns over others. For example, in WEIRD societies, which are not organized by intensive kin-based institutions, it is advantageous for individuals to have a willingness and a capacity to form relationships and associate with unrelated strangers. This is because they are expected to leave their home at adulthood and eventually start their own family in a place and with a spouse of their own choosing. To do this successfully individuals need to cultivate abilities, skills, and characteristics that make themselves attractive to unrelated strangers. In contrast, in societies where people are born into dense webs of obligations and responsibilities to their family, clan, or tribe, relationships that structure their life and roles to which they must assume are already prescribed at birth. Therefore, there is less pressure on individuals to cultivate personal attributes that make themselves desirable to unrelated strangers as potential partners in friendship, romance, or work-related capacities.

The WEIRDest People in the World is enthralling in its breadth and convincing in the importance it puts on kinship in explaining psychological variation. This is why when reading, I often had to remind myself to remain skeptical as I found myself agreeing far more often than disagreeing. The book likely oversimplifies the complexity of the subject it strives to explain almost as an unavoidable consequence of its scope. History is a messy product of a number of factors which cannot easily be isolated, controlled, and fit into a straightforward causal story. A number of other factors besides the influence of the Western Church were brewing in medieval Europe that could potentially explain many of the social and psychological changes Henrich pins specifically on the Marriage and Family Program (MFP). It is important not to be swept away into unquestioning acceptance of a thesis for which there surely are and will be counterarguments.

Nevertheless, Henrich has added much insight to a complex subject. He contributes to a larger goal, which is to understand human nature in all of its manifestations. For those of us who desire to see increased synergy between the natural sciences and the humanities in the pursuit of a greater understanding of the human condition, The WEIRDest People in the World is a big step in the right direction.

Alex Mackiel is a graduate student in psychological sciences at SUNY New Paltz, with an interest in the human evolutionary sciences. He maintains a blog, where he writes about evolutionary and cultural psychology. You can follow him on Twitter @ajmackiel.

Photo by Museums Victoria on Unsplash