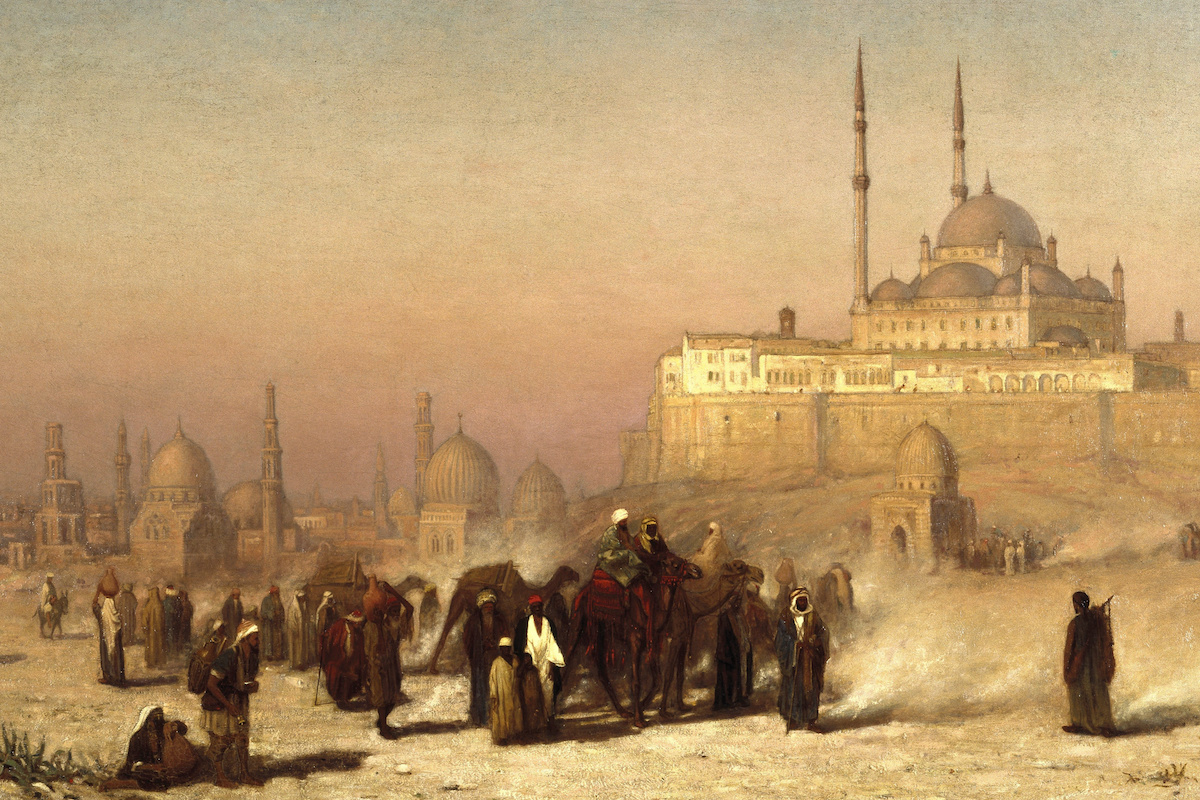 The spectacular story of the growth and withering away of ancient Mediterranean urbanism is often drowned out by the noise of the rise and fall of the Roman Empire. Cities had begun to grow and connect when Rome was just a cluster of villages. And at its height, in the second and third centuries CE, the ancient urban system stretched far beyond the political limits of empire. Traders, missionaries, and diplomats travelled through the caravan cities of northern Syria and Iraq to connect with ancient Greek cities, by then lying in the heart of the Persian Empire, in Babylonia (now southern Iraq), and even Afghanistan. Others set sail down the Red Sea in search of the entrepôts of East Africa, southern India, and Sri Lanka, or traded down the Nile beyond Egypt to Nubia. Amber was brought from the Baltic and ivory from south of the Sahara long before Rome’s imperial adventure got off the ground. Ancient historians and geographers such as Herodotus, Strabo, Pliny, and Ptolemy knew there were yet even more distant cities, in central Asia and among the distant Silk People of China.

Even in the darkest period of economic and political collapse, the chain of urban societies that stretched across the Old World was never broken. It already existed in the Bronze Age. The oldest cities on the planet were created in the fourth millennium BCE, first in Mesopotamia and Egypt and soon elsewhere in Eurasia. Mediterranean urbanism was a late outgrowth of a much older tradition, and was always more dynamic in the east. Latest to appear—and first to fail—were the cities of the western and northern fringes of the Roman world. In many periods, the largest cities of the Near East were far bigger than those of the Mediterranean. After Rome, Baghdad would dwarf the remnant cities of the early medieval west.

Yet open any book on the glory that was Greece or the splendour that was Rome, and you will be told that the ancient world was “a world of cities.” If you wander through any of today’s great capitals, especially in Europe or the eastern seaboard of the United States, you will see endless visual references to classical urban architecture. Piazzas recall the Roman forums and neoclassical churches mimic ancient temples. Civic buildings built in the 19th century often have great pediments supported by columns and approaches by monumental staircases. The British Museum, designed in 1823 and completed in 1852, is a case in point, and so is the Philadelphia Museum of Art, chartered in 1876 and completed in 1928.

As it happens, the ancient world had no museums or city halls or banks in a modern sense, but the Victorians built them as if they were palaces and houses of the gods. The same was true around the world. The Capitol Building in Washington, D.C. corresponds to no ancient structure: Athenian assemblies met in the open air, and the Roman Senates in temples. Right up until the middle of the 20th century, some of our greatest cities spoke almost uniquely in a classical dialect: Their centres were dominated by massive structures, built in marble and travertine and granite, and they raised up their great facades before wide horizontal vistas. The National Gallery in London towers over Trafalgar Square with its statues and lions and great basins. Not until the invention of skyscrapers and the mastery of steel, concrete, and glass did we learn to imagine great cities except as larger versions of classical ones.

The reasons for the dominance of classical urban style are well understood. The latest and most intense phase of our species’s headlong rush to urbanism is only two or three centuries old. During that period, European empires dominated the globe, and they did so spellbound by Roman antecedents.

The British built great Victorian cities in India and Australia. The young American republic looked to Roman politics and Greek architecture. Across Europe, the proceeds of nation-building and colonialism were lavished on the redevelopment of Berlin and Paris, Brussels and Madrid, erasing early modern and medieval cityscapes, and replacing them with marble, just as Augustus boasted he had done in Rome.

The truth is that ancient Mediterranean urbanism was far less grandiose than its modern imitations. The greatest Roman buildings hardly compared with the civic architecture of 19th-century industrial towns; the early modern architecture of London or Amsterdam is on a grander scale than that of most classical cities.

Indeed, it is possible to follow this trend back further. The most impressive ruins in Athens are Roman imperial structures, not those built by the classical democracy, even though Roman Athens was a rather dignified provincial city, while the Athens of Pericles ruled an empire. Likewise, Rome of the emperors more or less obliterated the visible traces of the republican city that had gone before, just as Napoleon III’s architect, Georges-Eugène Haussmann, obliterated most of medieval Paris in the 1850s and 1860s.

There is no mystery about all this change in scale. Technological advances and economic growth explain why the biggest Roman structures dwarfed those of classical Greece, and also why neither could compete with the grand civic architecture of the industrial age or the monuments set up by European empires that straddled the globe. And besides, there were so many fewer people in those days. During the second century CE, there were perhaps one billion people on Earth, more likely rather fewer. If 75 percent of us will soon live in cities, around the same proportion of humanity then lived on the land, in villages, hamlets, or scattered farms.

This is why ancient cities were—by modern standards—very small indeed. Even at the high point of classical urbanism, when there were maybe 2,000 cities in the territory of the Roman Empire, around three-quarters of them had no more than 5,000 inhabitants. Many of the inhabitants of classical cities were themselves farmers, working fields and orchards just beyond the city limits, or even gardens right in the centre of town.

For the longest time, historians of classical antiquity have been spellbound by the grandiose rhetoric of ancient writers. Epic poetry, drama, and rhetoric took the centrality of the city for granted; urbanitas (literally “city-ness”) is Latin for a certain kind of cultural sophistication, and the Greeks called their states poleis, which is the origin of our term “politics.” When early Christian writers called the polytheists country folk (pagani—hence our “pagans”), it was a dismissive label. As long as we knew antiquity mostly through literary creations composed by and for the wealthy, we accepted their valuation of city and country.

The cult of ruins that emerged in the Renaissance, and the cities that formed staging posts for visitors, all encouraged the idea of antiquity as a world of monuments. But most ancient cities were not like Rome and Athens, and they were never as grand as they were imagined by Enlightenment scholars and Romantics. Only in the last few decades have archaeologists and historians come to realize just how small-scale classical cities really were.

Besides, it suited the interests of many to build up the ancient and make it “classical.” Long before the Grand Tour took young gentlemen to visit classical sites, they had been indoctrinated by the prejudices of a class for whom urban life was the same as civilized life. Their study, their mastery of obscure languages, and their experience of the wider world marked them out as members of a ruling élite. The common experience of antiquity (or rather its traces) bound the ruling classes together, made them feel themselves aesthetically and culturally superior to the rest. When Europeans acquired empires, Rome provided a vocabulary, a set of visual symbols, and a bundle of slogans, quotations and half-memories, out of which to fashion an imperial civilization. Classicism served fascist parties in the 20th century, too. The stages on which the superiority of “Western Civilization” would be performed, in marches and parades, with spectacular monuments to victory and learning, had to be imperial cities.

Ganges riverfront at Varanasi, India, one of the world’s oldest continually inhabited cities.

The word “civilization” was itself not coined until the end of the 18th century. It sums up the ideals of Enlightenment scholars, an account of the world they wanted to build and imagined they were rebuilding. “Civility” was an older term, describing the character of a citizen (rather than a peasant). During the colonization of the New World, it was opposed to the barbarism of the indigenous peoples. Barbarian is another classical idea: first of all, the Greeks’ word for those who did not share their language and values, then a Roman term for peoples thought of as halfway between beasts and educated men. Look back down this genealogy and we can see how the ideas of urbanity, civilization, metropolitan sophistication, and the rest all became to be represented by classicizing idealizations of the city.

It is an historical accident that Greek and Roman images of empire still lie at the heart of so many modern cities. Our species’s urban adventure has many roots, in the valleys of Mexico and the jungles of the Yucatan, in the Sahel region south of the Sahara and at Great Zimbabwe, as well as in the valleys of the Tigris and the Euphrates, the Yellow and Yangtze Rivers, and along the Nile. Perhaps by the end of the 21st century, one or so of these other architectural idioms will have replaced the classical, suitably presented in the materials of the day.

17th-century European depiction of the Aztec city of Tenochtitlán, in modern Mexico

Our human urban history stretches back just a few millennia, quite close to the time at which some of us first began to farm the wilderness in which our more remote ancestors had foraged. Cities had no single starting point. Urbanism was invented again and again in Asia and Europe, in Africa, and in both the Americas. How did this come about? No dreams of urbanism accompanied the first humans to enter the Americas, who were hunters and fishers and foragers. The inescapable conclusion is that as a species we have some kind of urban potential, not a force driving us through history to a common urban destiny, but a kind of aptitude for urban life, a capacity to inhabit civic spaces—a tendency, given the right circumstances, to build up and live close. If we are indeed “urban apes,” then those who specialize in the ancient Mediterranean need to ask not why the city, but rather what took them so long.

From The Life and Death of Ancient Cities by Greg Woolf. Copyright ©2020 by Greg Woolf and published by Oxford University Press. All rights reserved.

Featured image: On the Way between Old and New Cairo, Citadel Mosque of Mohammed Ali, and Tombs of the Mamelukes, 1872, by Louis Comfort Tiffany (1848–1933).