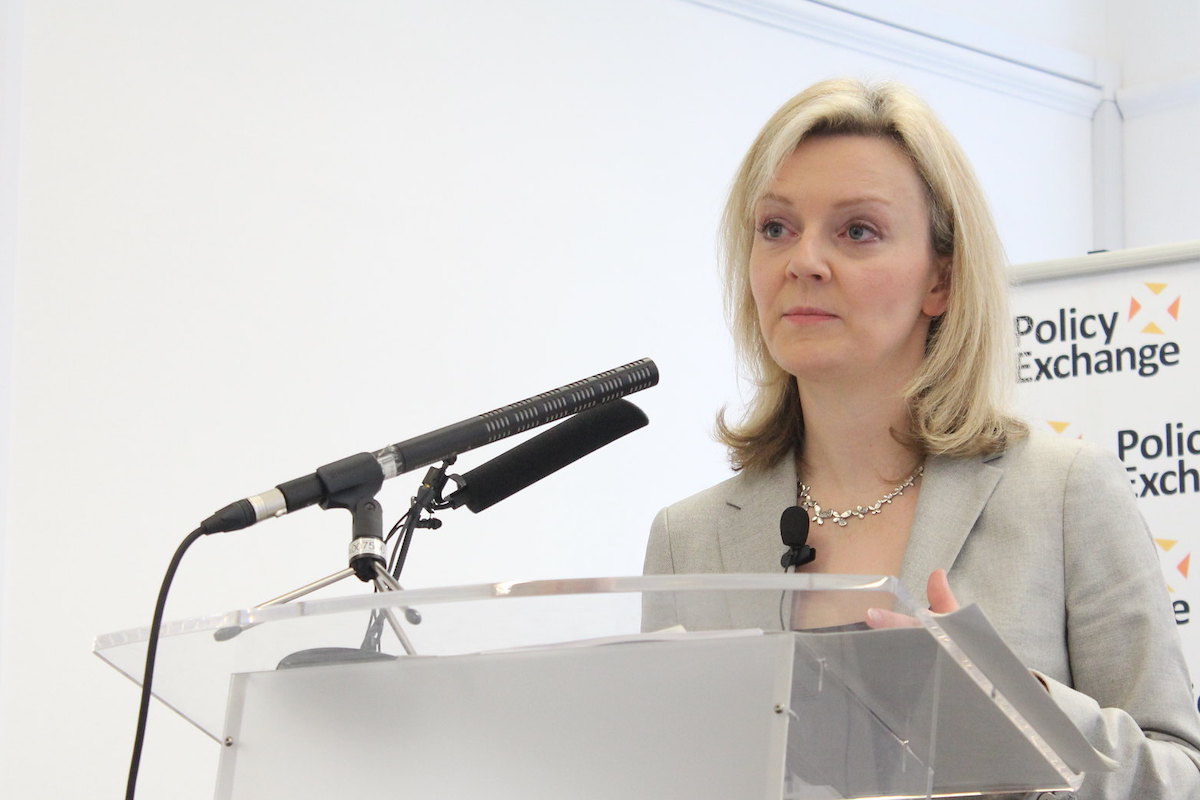 In the midst of a COVID-19 pandemic and a series of massive protests over racist police brutality in the United States, one might find it hard to believe that an author’s common-sense views on human biology would make headlines. Yet everywhere you look, you’ll see coverage of Harry Potter author J.K. Rowling, who’s now being denounced as “transphobic” for speaking plain truths about the differences between men and women.

In fact, so much attention has been focused on Rowling that some have missed the more significant British news in this area: The country’s Conservative government is distancing itself from proposed legislative reforms that would have enshrined gender “self-identification” over biological sex. Though Liz Truss, Minister for Women and Equalities, likely won’t be releasing the government’s policy response till July, leaks confirm that “self-ID” (as it’s widely known) will not be introduced. Moreover, Truss says she wants to protect gender dysphoric children from making “irreversible decisions” in regard to their bodies, and would allow women to create and maintain safe single-sex spaces free of male-bodied individuals. This is a huge win for so-called “gender-critical” activists, who lack the deep pockets and institutional influence of the far more fashionable trans-rights lobby—even if there is still a long way to go to repair the damage that’s already been done.

At less visible levels of policy-making, too, there have been substantial changes. The National Health Service (NHS) has changed its advice on paediatric transitioning, which now reflects the fact that there is scant evidence to support aggressive therapeutic options at an early age. NHS resources also now warn parents in regard to the possible negative effects of some therapies on brain, heart, and bone health. Under threat of litigation initiated by a 14-year-old girl, the Crown Prosecution Service withdrew a hate-crimes directive that would have enlisted teachers to bully girls into accepting males in their bathrooms. The fact that anyone thought this was a good policy in the first place shows how thoroughly trans-activist extremism had permeated official agencies.

To understand why it has taken so long for these policies to be rolled back, it is important to consider the outsized influence of websites such as Pink News, which purport to advance mainstream LGBT news and attitudes, but in fact have been co-opted by a highly motivated faction of (mostly male) trans activists. This vocal minority attracted little opposition when transgender anti-discrimination provisions originally were implemented to protect a few thousand British transsexuals (as many then commonly self-described). But things changed when legions of middle-aged men suddenly began insisting that they were women trapped in the wrong bodies (not to mention a massive surge in adolescent girls laying claim to the opposite path). Women who spoke up about this were systematically pushed out of any public square—the same treatment that some are seeking to impose on Rowling. But thankfully, times are changing.

Here are the death threats and harassment JK Rowling has been recieving. Including abuse from verified accounts.

Dozens of hit pieces written about “the backlash to her transphobia.” Not one mentioned the threats she’s receiving from these radical activists. pic.twitter.com/OuiWUBR2Ge

Because of Britain’s system of devolved political administration, the situation is still in flux, however. Scottish officials, in particular, have suggested they may impose a policy of self-ID on their own initiative, despite receiving low public support in two separate rounds of consultation. But even in Scotland, I’ve observed women organizing at the grassroots level to oppose male encroachment on their spaces—the only option we had before Rowling and other mainstream media figures began speaking out openly on our behalf. Ultimately, what motivated us wasn’t ideology, but safety. It should never be a hate crime for a woman to say, “I just don’t want to share a swimming-pool changing room with men.” Yet that was where things were headed.

In late 2019, trans activists protested feminist Meghan Murphy’s appearances at libraries in Vancouver and Toronto, where she discussed how all of these issues are affecting the safety of Canadian women. These confrontations became national news in Canada, and Toronto chief librarian Vickery Bowles was lauded for her principled decision to permit Murphy’s event. What is less known is that something similar played out in February 2020, when the Glasgow Women’s Library (GWL) no-platformed a feminist group called For Women Scotland (FWS), whose members wanted to discuss the proposed implementation of self-ID policies. At first, the feminist group was told that the library was cancelling the booking to repair a leaking roof. GWL then denied the group an alternative date on the basis that they were fully booked. Eventually, GWL confirmed publicly that they’d cancelled the booking because FWS’s “values” did not align with those of their institution.

This venue hire is no longer taking place. Initially it was cancelled due to our building closure but it has since come to light that the person who made the booking was doing so on behalf of an org whose values do not align with GWLs. 1/2

Think about that: A “women’s library” tells its supporters that it is refusing to hold an event dedicated to protecting actual women—out of deference to self-identified women whose claim to womanhood is based on filling out a form on a government website.

Needless to say, FWS members were appalled. And this is part of a pattern: Whenever women have attempted to meet to discuss the impact of gender ideology-driven public policy on women’s rights, venues are bombarded with tweets, calls, emails, and other forms of pressure from trans activists who claim that giving an audience to the other side of the debate is inherently hateful. Behind the scenes, meanwhile, activists have led a genuinely McCarthy-esque campaign of blacklisting against dissenters.

The Scottish Poetry Library deserves credit as one of the first British institutions to take a stand against this bullying. In February, it released a statement decrying “bullying and calls for no-platforming of writers in events programmes and in publishing”—a move widely interpreted as being directed at gender extremists seeking to excommunicate local feminists. Approximately 500 writers and readers, including novelists Joan Smith and Lionel Shriver, added their names to an open letter applauding the library for defending freedom of expression.

Asif Khan, director of the Scottish Poetry Library, was pointed in his response when Scottish PEN—a group that ostensibly supports freedom of speech—somehow saw fit to slam the library for its pro-free-speech policy. “It is ironic that on International Women’s Day we find ourselves turning a blind eye to the censorship that is the ultimate endgame of no-platforming,” Khan said of PEN. “My thoughts are with all the women writers of the world who are prisoners of conscience. I’m afraid this might happen here, too, unless freedom of speech is championed.”

It would be wrong to present these trans activists as working together as a single unit, let alone any kind of unified conspiracy. For the most part, this is nothing but a loose network of privileged millennials leveraging their positions within activism, arts, and academia to censor, ostracise, and, where they think necessary, punish women who oppose the idea that a man can become a woman by an act of self-declaration. Like all extremists, they believe their ruthless tactics put them on the side of angels. Unaccustomed to life on the breadline, they believe that any harm to a woman’s livelihood, relationships, professional networks, health, and security to be justifiable collateral damage in what they see as the great struggle of our time—the fight against transphobia.

Eager to please this constituency, certain literary businesses, such as Lighthouse bookshop in Edinburgh, now actually boast about excluding Rowling’s books from their shelves. For its part, London’s Second Shelf bookshop didn’t remove Rowling’s books, but announced that every time someone bought one, they’d make a donation to a lobby group that supports paediatric transitioning. Some activists even fantasize about scrubbing Rowling’s name off the entire Harry Potter universe.

Court: Gender-critical anti-trans beliefs are not worthy of respect in a democratic society, are incompatible w/ human rights of others.

JK Rowling : Bigots must be allowed to be bigoted at work, protect the bigots!

The novelists, librarians, and booksellers circling the wagons to shut women up have been insisting for years that they are motivated by nothing but love and tolerance. And for a while, people took them at their word—including many policymakers and legislators. But all cults eventually collapse under the weight of their own dogma once its absurdity is exposed. And thanks to the grass-roots efforts of women on both side of the Atlantic, that is what we now see happening.

Featured image: Liz Truss, currently serving as UK Secretary of State for International Trade, President of the Board of Trade, and Minister for Women and Equalities, photographed in 2013.