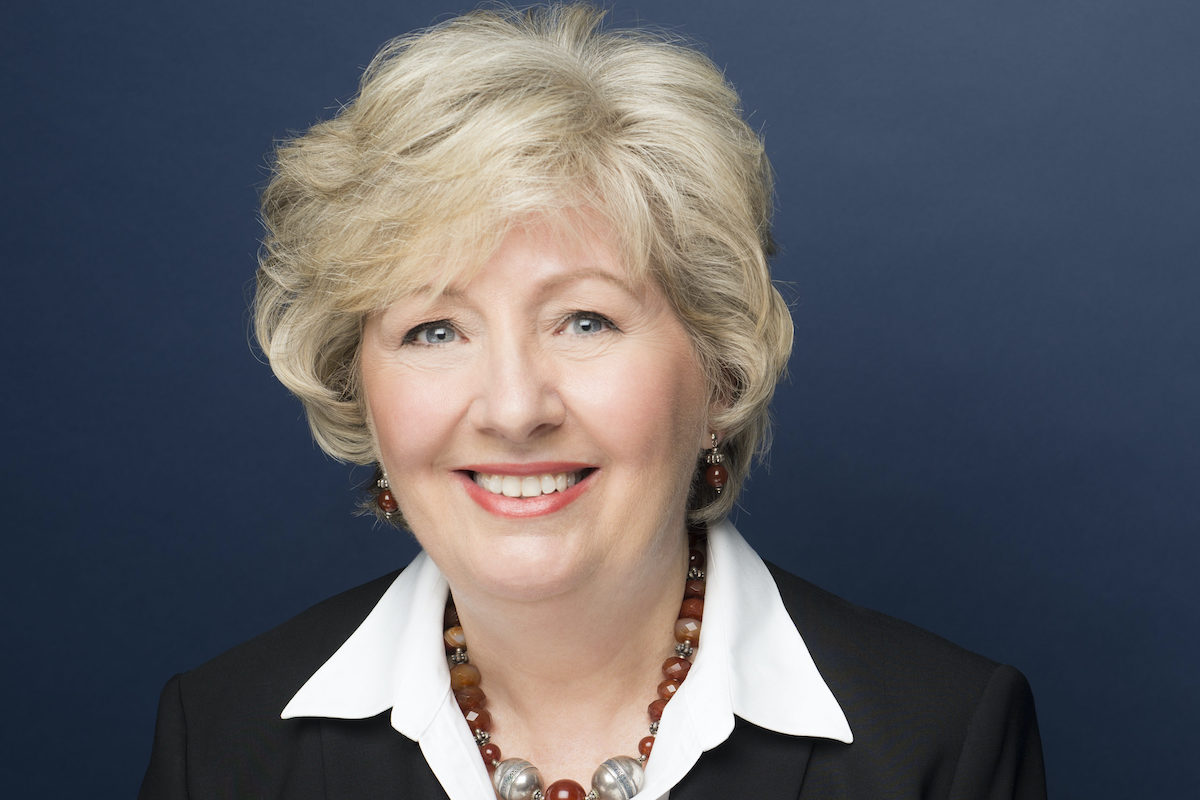 What follows is an adapted transcript of Vickery Bowles’ speech at the Empire Club in Toronto on March 9, 2020. Ms. Bowles is City Librarian at Toronto Public Library.

I recently came across an annual report published by the Toronto Public Library (TPL) entitled “Reading in Toronto, 1942”. In that document, written in the midst of a war being fought to protect our democratic freedoms, then chief librarian of the TPL, Charles R. Sanderson, shared his view with members of the Toronto Library Board on the essential and enduring role of public libraries in supporting a democratic society. He wrote: “In our annual report of a year ago, we presented a statement of our faith in the public library as the pivot of democracy. That faith remains, and it can be restated by saying that if a community is permitted to think—and democracy rests its case on this—it must have books, and books mean libraries, and libraries, for most of us, mean public libraries. We still believe with full sincerity that…making it possible for [citizens] to think with intellectual honesty, to think with informed minds, remains the primary job of public libraries, even in wartime. Without this, the rest is futility.”

So much has changed since that statement in 1942. But even in this digital age, public libraries continue to have core responsibilities to respond to intellectual-freedom challenges. And we as libraries are well-positioned to provide leadership in our communities, because public libraries help democratize the modern world by supporting literacy and access to a diversity of information and ideas.

To walk into a public space to freely attend a program, use a computer, use the study and lounge space, borrow a book or conduct research on absolutely any topic with the help of professional staff—these are significant parts of intellectual freedom. Nearly 80 years later, even though so much else has changed, Mr. Sanderson’s words remain relevant.

Certainly, the role of the public library has grown and evolved. And we are no longer just places for quiet study and reading, but also vital community hubs. We provide access to the latest technologies, from digital innovation with virtual reality headsets, to studio spaces that host e-learning and self-directed courses. We connect people with diverse cultural and leisure experiences, from indigenous programs to our sewing-fabrication studios.

Throughout this transformation, there is one thing that has not changed, and that is our focus on our core values and our fundamental commitment, as outlined in the library’s mission statement: to provide, preserve and promote universal access to a broad range of human knowledge, experience, information and ideas in a welcoming and supportive environment. Being a public institution and a government body, one of our core responsibilities is to uphold the fundamental freedoms of thought, belief, opinion and expression enshrined in our Charter of Rights and Freedoms.

And an important part of that commitment is making our spaces available for rent on an equitable basis to any individual or group in our community based on the purpose of the booking. Last fall, this policy was a subject of much discussion in the city of Toronto, and indeed across the country—prompted by a third-party room-rental event at the library, organized by a group called Radical Feminists Unite. This event featured a controversial speaker, Meghan Murphy.

The title of the event was “Gender Identity: What Does it Mean for Society, the Law and Women?” And it was to feature an educational and open discussion about the concept of gender identity and its legislation-related ramifications on women across Canada. The issue generated a lot of discussion. A lot of it was on social media, and a lot of that social-media discussion was negative. Some challenged the decision, including our mayor here in Toronto, representatives from organizations such as Pride Toronto, and parents of transgender children, all of whom were vocal in their opposition.

And then there were opinion articles in mainstream newspapers, many of which spoke out in support of TLP’s position, as did other voices, such as the Canadian Civil Liberties Association and the Center for Free Expression at Ryerson University.

Yet this wasn’t about one event, opinion, or viewpoint. This is about a larger, fundamental issue that gets to the very heart of what the library is, and what it is that we do.

The public library was founded on the social-justice principles of equity and inclusion. And these are values that guide us in the work that we do each and every day. What was so surprising to me in this whole debate was that we found ourselves defending free speech; while those who were opposing the library’s decision said we were undermining the rights of the transgender community, undermining their equity and inclusion rights, and putting this vulnerable community at risk of greater discrimination and even physical harm. The juxtaposition of free speech and the social-justice principles of equity and inclusion became a significant part of the conversation. But as I pointed out in my response to this criticism, freedom of speech and equity-and-inclusion principles are not at odds with each other. In fact, they are mutually reinforcing principles that are foundational not only to public-library service but also to our democracy.

Ensuring that minority and marginalized voices are heard often leads to greater understanding and tolerance. Pushing controversial and unpopular ideas into the shadows means there’s no opportunity for debate or discussion. Racialized communities, the LGBTQ community, and other equity-seeking groups have been successful precisely because their voices have been protected.

Given all of this, why did the Meghan Murphy booking at the library result in so much controversy? Well, first and foremost, it’s important to recognize that this is an extremely emotional issue, and understandably so. The transgender community is vulnerable, often suffering discrimination and violence. Many members of this community passionately shared their experiences through presentations to our library board, and in letters and emails to the library. And the hurt and anger I heard was real.

What’s interesting, however, is that amidst all of the hurt and anger, there was an important discussion, a conversation that emerged about the discrimination faced by people in the transgender community. This brought to light important broader issues that need to be addressed, such as poverty, isolation, unemployment, and, of course, safety. And we’re responding to this at the library by developing a service plan, in consultation with the community, to address our collections, our programs and our collaborations, our staff training, and our policy development.

We need to demonstrate cultural humility, highlighting our desire to learn from others and their lived experiences. And part of the way we can do that is by providing forums to discuss and debate the issues. These are the paths to social equity and inclusion. And this is what drives social change for the betterment of all. Community activism is based on free speech. And so it’s critical for us to protect free speech so that community activism can thrive.

We’re living through what some people call “cancel culture,” wherein there’s little to no tolerance for opinions that are outside the mainstream, especially if members of a group feel that they’re threatened or hurt by the views expressed. And some people claim a view should not be tolerated if it makes them feel unsafe. And I can tell you, I certainly heard that a lot during this whole controversy.

People asked me: How can the library offer a welcoming and supportive environment if it allows people such as Meghan Murphy to speak at the library? Well, the answer is that reflecting diversity in terms of the people, the ideas, the books, the programs, and yes, even the room bookings, is foundational to creating a welcoming and supportive environment. And this will include content that will be offensive to some. We welcome everyone into our spaces without judgment. When people come to the library, we support them as they pursue their interests and make sure that they are not discriminated against or harassed in any part of the process.

Another aspect to this: Many people contacted me either through email, or notes, or talking to me individually, telling me that they supported my decision, but they didn’t feel they could share their views publicly because of possible reprisal from friends or colleagues, or on social media.

I think this provides yet another telling perspective on the state of free speech. Some of you may not realize this, but, historically, libraries have faced their greatest challenges to intellectual freedom from people asking us to remove books from our collections. And this still happens, of course. However, increasingly, libraries throughout North America are facing challenges to program content and third-party room bookings. In the United States, for instance, the state legislatures of Missouri and Tennessee both have proposed legislation to establish parental-review boards that would have the authority to remove content and programs they feel are offensive or inappropriate for children. These initiatives are targeted at LGBTQ content.

Believing in freedom of speech means believing in freedom of expression for all. The late Elliot L. Shelkrot, long-time head of the Philadelphia Public Library, once said that democracy depends on an informed population. And where can people get the information they need? At the library—by accessing books with controversial ideas and unpopular opinions, by sitting in a room with hundreds of people debating and discussing contentious issues. Or even by taking a workshop on how to run for political office, even if you don’t have any public-service experience or you’re not born into the right family. We open up doors. We open up people’s minds to new opportunities for discussion that connect us to each other and teach us to listen.

And so how did all this play out with the third-party rental featuring Meghan Murphy? Well, there were a few hundred protesters outside the Palmerston branch of the library here in Toronto on October 29th, 2019. They showed up and voiced their opposition to the event and exercised their right to free speech. Meghan Murphy had a police escort into the branch to deliver her presentation to about 100 attendees, most of whom were women. So Ms. Murphy and the attendees were all able to exercise their right to free speech and expression as well. And with the help of 40 – 50 police officers and a few staff, the evening concluded without any incident.

Last year, similarly, we brought to life the library’s commitment to opening doors and new avenues to discussion with the launch of what has become a hugely popular series for us. These are public programs called “On Civil Society“. This series of events and debates is run by the library across many of our 100 branches. It is expressly designed to open up difficult conversations and explore what comprises a civil society.

For generations, public libraries have been a democratizing force in the world, supporting civil society and helping us learn about the world in all of its complexities. With so many challenges to freedom of speech, it’s imperative that we continue to have open, uncensored discourse, and listen to, respect, and learn from each other’s perspectives. We need to hear more voices, not fewer voices. And that’s what public libraries allow us to do each and every day.

Vickery Bowles is City Librarian at Toronto Public Library (TPL). This text is adapted from Ms. Bowles’ March 9th presentation to the Empire Club of Canada, entitled “Debate in a Complex World“. Web links contained in this article were added by Quillette during the editing process.