Things are getting back to normal in New Zealand. In the past two months, every time I have been to my local supermarket the rules have changed. At the start of Lockdown Level 4, a two-meter spaced queue had been marked out and a long tent had been erected to accommodate it. There was a “one trolley, one person” rule, an insistence on a single “designated shopper” per household, and a ban on bringing recyclable bags into the supermarket. Contactless payment was preferred and cash was discouraged. Customers were required to maintain two meters distance from the person in front of them at the checkout. All staff wore some kind of PPE, and some wore face visors. Perspex barriers appeared at the deli counter and the checkout. There were shortages of baking products, yeast was for some reason unobtainable, customers could purchase no more than two packets of pasta or tins of tomatoes, and messages were broadcast over the Tannoy system instructing customers to shop normally.

In response to the sudden outbreak of the COVID-19 pandemic, policy was being made on the hoof. Every few days at the supermarket, the rules were tweaked and tightened. Now, as rapidly as these rules were introduced, they are being relaxed and discarded. Under Lockdown Level 3—less stringent than Level 4 but still severe—I was allowed to venture to Noel Leeming to pick up gas refills for my Sodastream. Three weeks ago, I made an appointment to “click and collect.” I was met at the door by a shop assistant in PPE. I handed over my empty CO2 bottles and picked up refills paid for online. I was also now able to go to my local pub and collect takeaway by appointment.

A couple of days ago, under Lockdown Level 2, I saw checkout operators without facemasks for the first time in weeks. The wipe-down-your-shopping-trolley-with-sanitizer service at the entrance had been discontinued. The tent that sheltered the queue to get in had been taken down. There was still a person on the door counting people in and out but the number allowed inside had increased and the queue was now gone. (I would like to give the management and staff of my local supermarket, Lincoln New World, a shoutout—they have been fabulous.) Other businesses are now opening up again. At the weekend, my family went out for brunch at a café for the first time in two months. For the purposes of contact tracing by the venue, I had to sign in, which I thought quaint.

At the time of writing, New Zealand had reported just three new cases of COVID-19 in nine days. There were six days with no new cases and three days with one new case each. Around five percent of the population has been tested for COVID-19. The authorities have been conducting random tests to accrue solid data with which to inform public policy. So, if you want a picture of what competent government during a pandemic looks like, you might look at Wellington. In New Zealand, the curve has been flattened. ICU wards have not been overwhelmed. Testing has been widespread. Prime Minister Jacinda Ardern has handled a difficult situation adroitly—she listened to the epidemiological science and then sold the recommended policies to the people. As a result there have been very few COVID-19 deaths in New Zealand. As of May 20th, only 22 people have died.

The following scatterplots show new cases of COVID-19 per day in New Zealand compared to other countries. I use scatterplots (that show individual daily data points) rather than logarithmic scales with smoothed cumulative lines for various reasons. Firstly, I prefer my data served raw. Logarithmic scales can mislead by turning alarming hockey sticks into soothing curves. Secondly, lines based on cumulative totals always go up, which can be unduly depressing. The raw unmassaged daily data of new cases shows a more encouraging picture. In many countries the rate at which new COVID-19 cases are being detected is slowing. New cases in New Zealand are close to zero. To give a consistent baseline, the New Zealand data are represented by solid black dots in each graph.

The first scatterplot compares New Zealand (NZ) with Ireland and Denmark. These are Western democracies with similar population sizes (around five million). On its worst two days, Ireland recorded more new cases of COVID-19 than New Zealand has recorded since the pandemic began. As you can see, the NZ data shows the efficacy of the “go hard, go early” policy the country adopted. Like many other nations in the eurozone, Ireland’s numbers have been high. However, they are now trending downwards: 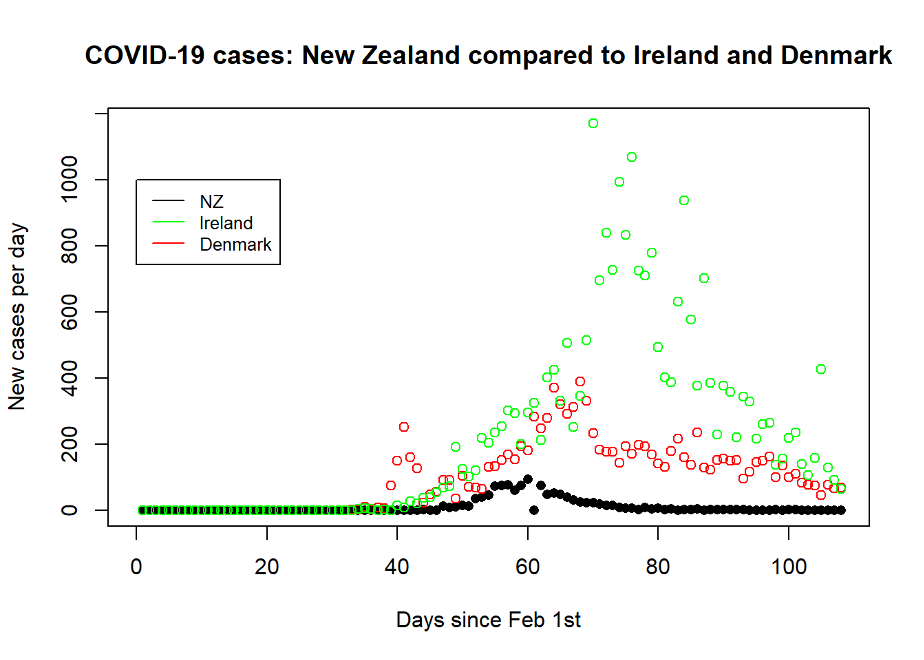 The second scatterplot compares New Zealand with Singapore and Norway. Again, both these nations have populations of about five million. Singapore was widely praised for its COVID-19 response a few weeks ago but Bangladeshi workers in crowded dormitories are thought to be the cause of a dramatic new spike in cases, while cases fell in Norway and New Zealand:

Norway, adjacent to Sweden, adopted similar measures to New Zealand. The border was closed, schools were shuttered, and a general lockdown was enforced. In Sweden, policies were less restrictive. As it has a population of 10 million, I have halved Sweden’s daily new case count to give a per capita figure expressed as “new cases per day per five million people”: 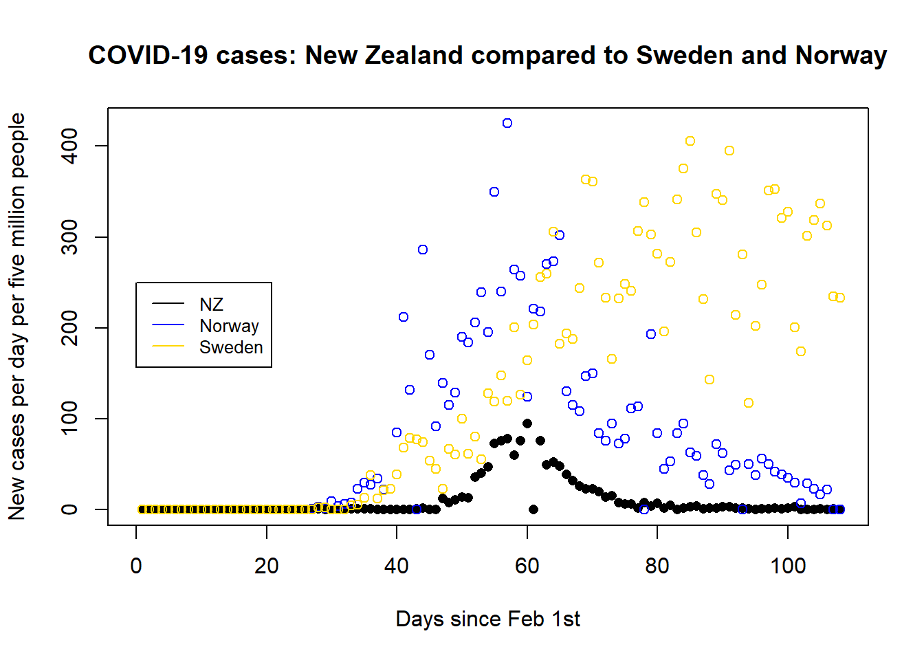 Given these data, it puzzles me that writer after writer in the Spectator has extolled the virtues of Swedish COVID-19 policy. Objectively, Sweden’s numbers only look good when compared to nations with really poor figures such as the UK. Compared to neighbouring Norway, Sweden’s record in combatting the disease is unimpressive. When it comes to winning the epidemiological battle against COVID-19, Oslo and Wellington are streets ahead of Stockholm at present.

As for Washington and London, their figures show a rather similar pattern to Sweden—volatile daily numbers with relatively little in the way of a downward trend. Again the figures are adjusted for population size. 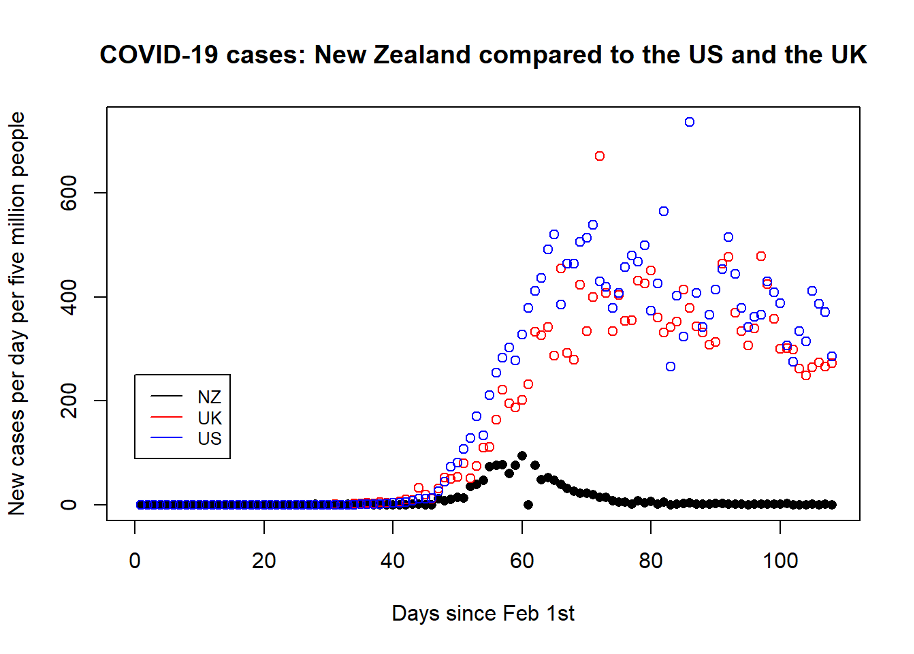 The democracies that have handled the COVID-19 pandemic best are not the traditional great powers but smaller players like Australia, New Zealand, and South Korea. Australia and New Zealand seem to have taken a close look at what was going on in South Korea and rapidly adopted similar policies (flight bans, closed borders, lockdowns, contact tracing). Again these figures are adjusted on a per capita basis: 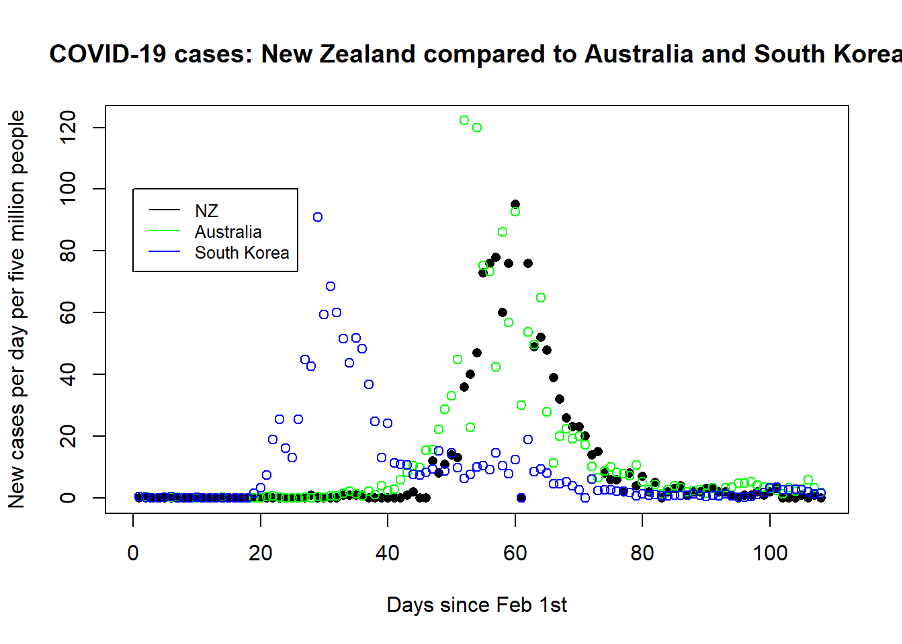 It should be noted that New Zealand is favoured by its remote location. From my local airport, Christchurch, there are 100 direct flights a year to Antarctica, which is a five-hour hop. Its nearest neighbours, Australia, New Caledonia, and Fiji are each a three-hour flight away. Nevertheless, the government has performed well under challenging circumstances. It listened to the scientific advice, watched how China’s closest neighbours responded to the gathering threat, and then acted accordingly. The delay in reopening bars at Level 2 was prompted by a policy reversal in Seoul. Bars were reopened in South Korea a few weeks ago but a single asymptomatic superspreader started a new cluster and the government closed them down again.

Almost every day for weeks, Prime Minister Ardern has faced the media alongside the Director-General of Health, Dr Ashley Bloomfield. Calmly and patiently, she has explained the situation, explained the scientific advice, and persuaded her fellow citizens of the measures required. Her messages have been simple and clear. Stay home. Save lives. Be kind. Stay strong. She has transparently fielded the media’s questions and yet remained relentlessly on message. Not everyone is satisfied, of course—there will always be those who think they know better than government. But for New Zealand, the worst looks like it may be over. It is too soon to declare victory, but the government now has a clear picture of the patterns of infection. The authorities have explained where all the clusters have occurred without divulging individual details. The papers and studies informing public policy have been available to anyone who wants to read them.

The policy fix for COVID-19 implemented by the NZ government was simple. Close the border. Impose a 14-day quarantine on all new arrivals. Encourage social distancing and hand-washing. Impose a hard and early lockdown to snuff out new infections. Close down all non-essential businesses for five weeks. Ramp up testing. Ramp up contact tracing. Get new cases down to zero. These policies have worked. Now New Zealand can focus on restarting its economy. As things stand, the cost will be considerable. Facing an election in September, Ardern will have her work cut out to minimize the number of business closures and job losses resulting from quarantine. And, as restrictions on business ease, there remains the risk of fresh outbreaks, particularly from people without symptoms.

Under Level 2, venues and their patrons are required to cooperate with contact tracing policies. I had to scrawl my contact details for brunch and takeaway pizza at the pub. On Tuesday, New Zealand introduced a voluntary contact tracing app. Custom-built and developed in-house by the Ministry of Health, it will supplement manual contact tracing methods. It has been designed with privacy in mind and approved by the country’s privacy commissioner.

The economic battle to get back to normal will be longer and harder. Sectors like tourism and aviation are in dire straits as demand has collapsed due to quarantine. To stave off commercial calamity New Zealand has set up a $50 billion COVID-19 fund. That is a lot of emergency cash to find for a country whose normal annual budget is around $90 billion. That said, overall people feel optimistic. There is a sense that catastrophe has been avoided and that things are getting back to normal. There is a long way to go, of course, and it would only take a couple of asymptomatic super-spreaders to move those numbers above zero again. But for the moment, as far as COVID-19 is concerned, there is a sense New Zealand has reached the end of the beginning if not the beginning of the end.