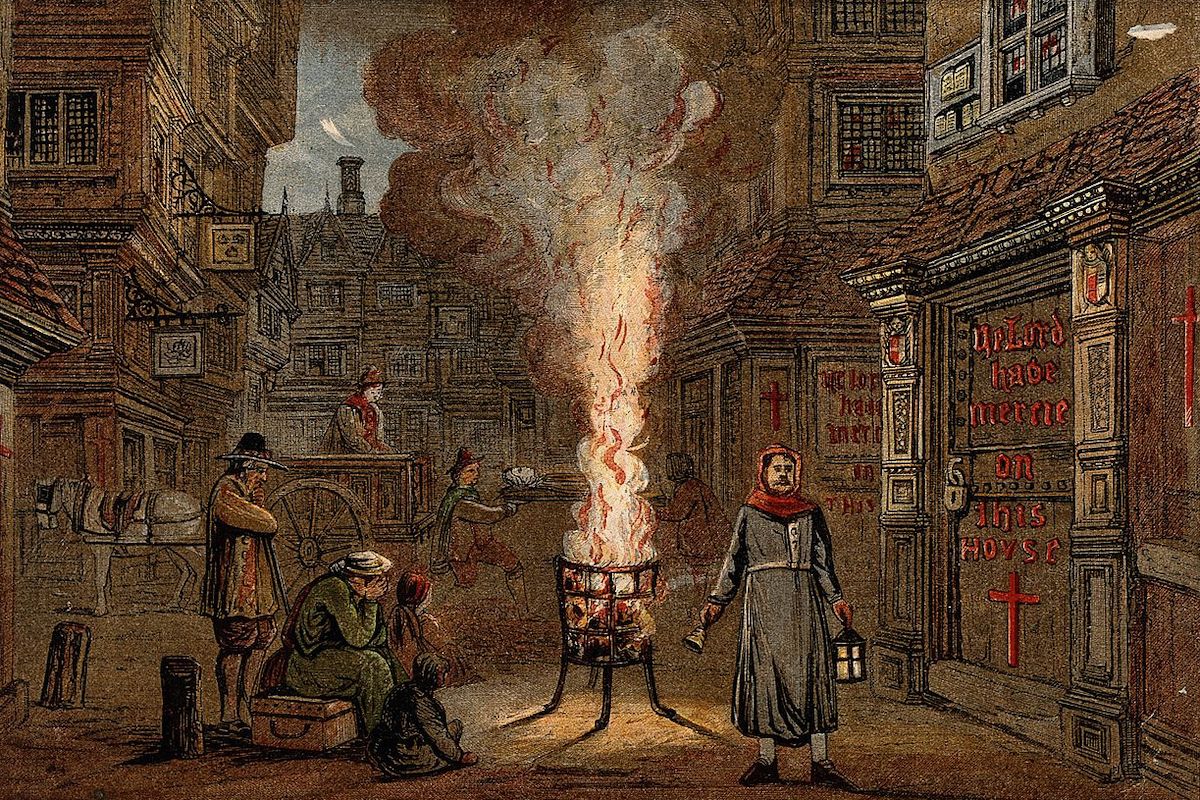 One of the comforts of studying history is that, no matter how bad things get, you can always find a moment in the past when things were much, much worse. Some commentators on our current crisis have been throwing around comparisons to earlier pandemics, and the Black Death of 1347 — 50 inevitably gets mentioned. Please. The Black Death wiped out half the population of Europe in the space of four years. In some places the mortality was far swifter and deadlier than that. The novelist Giovanni Boccaccio, who gave us the most vivid picture of the Black Death in literature, estimated that 100,000 people died in Florence in the four months between March and July 1348. The population of the city in 1338, according to one contemporary chronicler, stood at 120,000.

Boccaccio at the time was a city tax official and saw the whole thing at ground level. Every morning bodies of the dead—husbands, wives, children, servants—were pushed out into the street where they were piled on stretchers, later on carts. They were carried to the nearest church for a quick blessing, then trundled to graveyards outside the city for burial. As the death toll rose, traditional burial practices were abandoned. Deep trenches were dug into which bodies were dumped in layers with a thin covering of soil shoveled on top. Boccaccio writes that “no more respect was accorded the dead than would today be shown to dead goats.”

Like COVID-19, the disease spread with bewildering rapidity, but unlike in the modern pandemic, it infected everyone, young and old, rich and poor, not mainly the old and infirm. And again unlike the current virus, the effects of bubonic plague were particularly humiliating. Tumor-like growths as big as apples, called “bubos,” would appear in the groin or armpit. Gangrenous blotches would appear on hands and feet causing the skin to turn black and die. The victims would start coughing up blood, all their bodily fluids stank and their breath became putrid. “The stench of dead bodies, sickness and medicines seemed to fill and pollute the whole atmosphere.” There was no dying with dignity during the Black Death.

It’s no surprise that a kind of extreme social distancing became the norm, even without urging from governments. Boccaccio’s stories are shocking. Everyone ran in panic from the sick. Neighbors shunned neighbors, relatives relatives. Children abandoned elderly parents and priests their flocks. Incredibly, “even fathers and mothers refused to nurse and assist their own children, as though they did not belong to them.” Some reacted by locking themselves up with a few friends in some comfortable place stocked with food and fine wines. They would entertain themselves with music and refuse to receive any news of the dead. Others, often those without the means to escape, became fatalistic and began looting the houses of the dead, stuffing themselves with food and drink, heedless of the risks of infection.

It is not yet certain that COVID-19 will become the fifth endemic coronavirus in the world today. The far more deadly bubonic plague long remained endemic in Europe, turning pandemic again some 17 times before its last outbreak in 1664 — 67—about once a generation. Over time a kind of bush telegraph developed in cities to keep track of new outbreaks. Transmitting news of the plague became a regular topic of private and public correspondence. The questions sound familiar to us now: Has the plague come to Bologna? How long has it been there? How many are infected? How many have died? Has a quarantine been imposed? Public authorities, predictably, took drastic measures to isolate the sick. In Venice, physicians were forbidden to leave the city during plague—as today, there was no social distancing for medical personnel. Plague doctors were required to wear the premodern equivalent of the hazmat suit: a long linen gown, a hat covering the hair, eyeglasses, and a mask with a long beak containing antidotes and perfumes to mask the stench of death. Today, the plague doctor’s dress still exists as a popular costume during Carnival.

Were there any silver linings to so horrible a pestilence? There were surely a few, though some of them remain speculative even now. Florentine Republicans began to appreciate Madonna Peste (Lady Pestilence) when she carried off their great nemesis, the duke of Milan, in 1402, at a critical moment during their long war with the great tyrant. After the Black Death there was an “inheritance effect” that led to far greater concentrations of wealth among those who survived. Some modern historians have claimed that this concentrated wealth led to an upmarket “investment in culture” that made possible the Renaissance itself. That’s a bit of a stretch.

But there was one lasting benefit of plague that is with us still. In Renaissance Italy, the most effective form of social distancing turned out to be villeggiatura—withdrawing from the city to a country farm or villa and waiting for the pestilence to subside. After the first few outbreaks of plague in the later 1300s, many city folk began to invest in country estates, in part to secure reliable food supplies for their families in times of crisis. They began to spend more time in the country, especially during the hot summer months when the plague was at its worst. The Medici eventually owned 27 villas in the Tuscan countryside, many of them designed and decorated by leading architects like Giuliano da Sangallo and painters like Filippino Lippi and Jacopo Pontormo. Villa life became generally popular for wealthier bourgeois families, and over time a villa culture developed. Boccaccio’s Decameron provided an early literary model. It depicted a group of noble young men and women escaping to the hills outside Florence during the plague, entertaining each other with witty stories, song, and dancing. Renaissance literati, being passionate lovers of antiquity, adored Cicero and longed to imitate the urbane conversations on literature and philosophy he described in his dialogues, held in his classical villa at Tusculum. Even the less sophisticated learned to enjoy more spacious living in the country, reading in cool, manicured gardens or viewing scenic landscapes. They began to cultivate summer sports, musical events, and festivals. The summer vacation was born.

James Hankins is a professor of Renaissance history at Harvard University.

Featured image: “Bring Out Your Dead” courtesy of  Wellcome Images