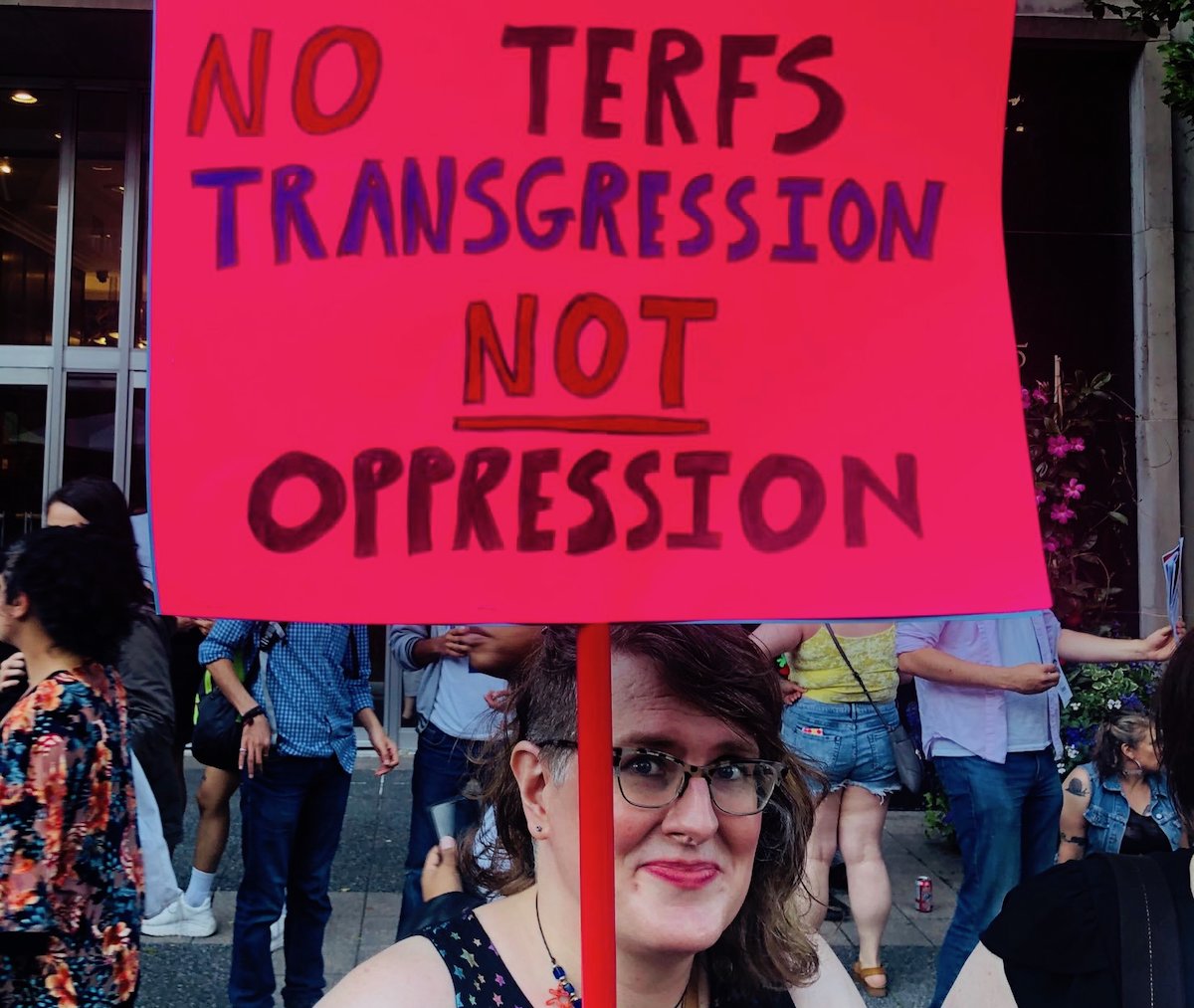 “TERFs and what everyone needs to know about trans-exclusionary radical feminists,” ran the title of an article in Cosmo last month. TERFs—a term of abuse that means “trans-exclusionary radical feminist”—are a “minority group who usually stick to online forums,” it explained, though they also hand out “transphobic leaflets.” Under the guise of protecting women, they spread the idea that “trans women are a threat because they are men, attempting to gain access to women’s spaces such as bathrooms and trick lesbians into having sex with them.” Many are, apparently, “funded by anti-abortion and evangelical groups.” Some call themselves “gender-critical” to seem more “palatable to the general public.” But, the article argues, it would be best to call them what they are: “anti-trans activists.”

The same themes appeared in an article published a few weeks earlier by Vox, entitled, “The rise of anti-trans ‘radical’ feminists, explained.” So-called TERFs, author Katelyn Burns wrote, are anti-trans bigots and anti-feminist; funded by conservative Christians; a small online cabal in thrall to gender stereotypes. Burns also set out, in some detail, a related case pending before the U.S. Supreme Court: R.G. & G.R. Harris Funeral Homes Inc. v Equal Employment Opportunity Commission. Much as I take exception to the contents of both articles, Harris Family Funeral Homes is indeed an excellent place to start if you want to understand what is at issue in the campaign against “TERFs,” as well as the torqued language that is used to prosecute it.

Harris Family Funeral Homes centers on Aimee Stephens (born Anthony), who started working at a Detroit-area funeral home as a man; and, after six years of employment, transitioned to presenting as a woman. That meant following the funeral home’s dress code for women (dress or skirt) rather than that for men (suit with trousers). Two weeks later, the manager, Thomas Rost, fired Stephens, in part because, as the Vox article has it, she “was no longer going to represent [herself] as a man. [She] wanted to dress as a woman.” The square brackets embedded in this quotation were inserted by Vox, not me, because Rost used male pronouns to describe the person whom he had known and worked with for six years as a man—but Vox did not wish to repeat this act of “misgendering.”

The position of the Equal Employment Opportunity Commission (EEOC), along with various other civil-rights bodies such as the American Civil Liberties Union, is that Stephens suffered discrimination because of being trans rather than “cis” (i.e., non-trans), and that this should count as sex discrimination, as understood under Title VII of the Civil Rights Act of 1964. They argue, roughly, that Stephens is being penalised for being the “wrong” sort of woman—much as women in earlier cases won recompense after they were fired for not wearing high heels or enough makeup. The funeral home, supported by amicus briefs—including one from the Women’s Liberation Front or WoLF, a radical-feminist group—counter that Stephens is not, as the term should be understood under Title VII, a woman at all. Stephens was fired for behaving in a way that would have got any male fired. No discrimination occurred.

A broad ruling in favour of the EEOC could establish gender self-declaration (or “self-identification,” or “self-ID”) as the de facto standard across America when it comes to distinguishing “men” from “women.” This would have enormous implications for all sorts of single-sex provisions, from battered-women’s shelters to women’s sports.

Most discrimination claims follow a common structure. (I’m speaking generally here, not presenting a legal opinion or referring to any particular country’s laws). It runs like this: X is a person of type Y. People of type Y are permitted to do Z. But person X has not been permitted to do Z, or has been punished for doing Z, and there is no distinction between person X and other people of type Y that would serve to reasonable justify such disparate treatment.

For example: Stephens was a woman working at Harris Funeral Homes. Women working at Harris Funeral Homes are permitted (indeed required) to wear skirts or dresses. Stephens wore skirts and dresses, yet was fired for doing so. The basis for that decision was that Stephens identifies as a trans woman, and is not a cis woman, a distinction that does not comprise a reasonable basis for disparate treatment. The employer’s actions therefore are discriminatory.

Other hypothetical examples could be: Stephens is forbidden from using the ladies’ restroom, yet has not behaved in such a way as to justify such exclusion; or Stephens was ruled ineligible for a grant program reserved for female entrepreneurs, yet doesn’t fall outside the program criteria in any other respect; or, Stephens is barred from a women’s athletic competition, and not because of, say, an applicable age or weight limitation.

In other words, discrimination cases typically are assessed in regard to some comparator class: the “people of type Y.” Stephens’ case stands or falls on the issue of whether or not Stephens is a woman. If “she” is a woman, a finding of discrimination is indicated; if “he” is not, then such a finding is difficult to prove.

That logic, in a nutshell, signals what the “trans-exclusionary” part of “TERF” refers to. It certainly sounds bad (“exclusion” being a modern secular sin), for it suggests that so-called TERFs want trans people excluded from health care, or from jobs or homes, or from society as a whole—or even from life itself. (A popular line of argumentation in trans-activist social media is that gender-critical voices are “literally” seeking to “erase” trans people.) But in fact, the only thing that most “gender-crits” reject is the idea that males can be members of the group “women.” According to Vox, the term “TERF” was created in good-faith, and not as a slur, as a means to “separate radical feminists who support trans people and those who don’t.” But this issue really has nothing to do with who “supports” whom. It’s a question of definitions.

We are instructed by both Cosmo and Vox that only a small minority think males cannot be women. In fact—in Britain at least—that is the view of a large majority. We know this because of a 2018 crowd-funded survey of a random, representative sample of people who were asked to consider a fictional person who identifies as a woman but was born male and has male genitalia (as almost all trans women do, genital reconstruction being a rarity). Respondents were asked whether such a person is a woman, a man, or neither, or whether they preferred not to say. Only 19% considered such a person to be a woman; 52% replied man. Follow-up questions about whether this person should be permitted to compete in women’s sports, or use female changing-rooms, or be incarcerated in a women’s prison if they receive a custodial sentence, found similar results. In other words, though few people are “radical feminists” (the term refers to a specific analysis of relations between the sexes), a huge majority of ordinary Britons would be considered “trans-exclusionary” under the typology used by Cosmo and Vox.

There can be no doubt that those who wrote the Civil Rights Act would not have thought Stephens was a woman. It would not even have occurred to them. Stephens is male, and it is only recently that the idea that a male can literally be a woman, or a female a man, has even been entertained, let alone been enshrined as progressive orthodoxy.

Of course, neither popular opposition nor the original intention of legislators should be held as conclusive. Public opinion and definitions change, and many of the most important civil-rights revolutions were advanced in defiance of social tradition, political pushback and even violence. Those who wrote that “all men are created equal” did not mean to include women in that equality, and yet that is how the line is now interpreted. It would once have seemed absurd to imagine that women should be granted the franchise, or that marriages should be permitted between people of the same sex.

Consider the way Vox described Stephens’ back story: “She had known since she was 5 years old that she was a girl and had been living as a woman outside of work for some time. Though she loved her job at Harris, where she had worked her way up from apprentice to funeral director, she felt she had to hide who she was there. Until she couldn’t any longer.”

This is called “begging the question”—an expression that is often misused, but which actually means “assuming that which is to be proven.” (It is also called circular reasoning.) The child under discussion was a boy, anatomically, legally and socially. That boy would have been accepted into a male sports team and the Boy Scouts, and turned away from a female sports team and the Girl Guides. Calling that child “she” is a rhetorical device used to sidestep the need to argue that Stephens is now a woman, by pretending that Stephens was always a woman (or girl). It is analogous to someone from a bygone age seeking to give women the vote by insisting that women were always able to vote, and supporting that claim by redefining the words used in the laws restricting the franchise to males, and then denying that the words had ever meant anything different.

As already noted, the above-discussed survey was crowd-funded—which brings me to yet another claim in the Vox and Cosmo articles: that “TERFs” are linked to evangelical Christians and far-right groups. One hears this in the UK, where gender-critical groups are dismissed as the paid-off puppets of shadowy American Conservatives. Well, if all this lucre were on offer, why on earth would British women have felt the need to crowdfund as a means to collect data?

It should also be noted that so-called “TERFs” also are required to pass the digital hat to defend themselves against civil and criminal cases taken by trans activists who sue them for hate speech, or to take their employers to tribunal when they lose their jobs for gender-critical beliefs, or to try to stop the police from hounding alleged “TERFs” because of something they wrote on social media.

It is certainly true that the fight against gender self-ID has made for strange bedfellows—for it turns out that understanding that humans are sexually dimorphic mammals incapable of changing sex is not restricted to any one part of the political spectrum. Some among these bedfellows are indeed motivated by the belief that Man and Woman are categories created by a higher power, and so it is not for humans to redefine those categories.

But it is not “TERFs” who are motivated by adherence to conservative gender norms. Just the opposite: Since gender activists have thrown out biology as the criterion for distinguishing between men/boys and women/girls, they have to fall back on something else. And that something invariably has turned out to be stereotypes. All the “TERFs” I know would unhesitatingly support Stephens’ right to wear a skirt to work. But they don’t think that right should depend on whether Stephens is a woman.

Quillette’s Jonathan Kay talks to activist Christopher Rufo about his new status as conservative intellectual celebrity—and asks whether the rising opposition to progressive ideological radicalism can go too...

Quillette’s Jonathan Kay speaks to film writer Christian Toto about his RealClearInvestigations look into the increasingly direct identity-politics messaging that now is being pushed on North American toddlers through...