The Impressionist painter Pierre-Auguste Renoir faces stern moral criticisms in Peter Schjeldahl’s recent New Yorker essay “Renoir’s Problem Nudes” for paintings deemed to be too adoring of women as soft fleshy creatures. On this basis, Schjeldahl argues, Renoir should be dismissed from canonical art. The evident pleasure Renoir took in painting female bodies represents his moral failure—the sexist and unethical “male gaze.” Renoir’s patriarchal attitudes, Schjeldahl writes, “may be worse than misogyny, which at least credits women with power as antagonists.” The scandal of Renoir’s nudes is that his canvases express his love of women’s bodies: “Sex and art figured for him as practically interchangeable rewards for living. An argument is often made that we shouldn’t judge the past by the values of the present, but that’s a hard sell in a case as primordial as Renoir’s.” The man evidently enjoyed the female form, and thought that sex and art were good things. What a monster.

Schjeldahl’s description of Renoir’s view of women is, of course, entirely correct. After all, Renoir is famously said to have remarked, “I paint with my prick.” But of the many comments Renoir is reported to have made about painting female nudes, one stands out as most expressive of the feelings we see on his canvases: “A painter who has a feel for breasts and buttocks is saved.” As a woman and a product of a recent liberal arts education, I am supposed to feel outraged by Renoir’s sexualization of women, and by the fact that he reduced them—and would have reduced me—to breasts and buttocks. But Renoir’s statement was not about sexual objectification, but about salvation. What does Renoir mean when he says “saved”?

In his essay deriding Renoir’s nudes, Schjeldahl cites the art historian Martha Lucy’s comment that Renoir has “come to stand for ‘sexist male artist.’” I had assumed that Lucy herself endorsed this view. Happily, I was wrong. In her lecture about the Clark Institute’s exhibition of Renoir’s nudes, it is impossible to miss Lucy’s love for the painter. So uncommon is it to see a scholar take delight in her subject matter, that Lucy’s lecture might seem, at times, to be unsophisticated, were it not for her expertise on the subject and deep understanding of the cultural movements that now cast Renoir in such a negative light.

Far from criticizing Renoir, Lucy critiques our modern way of seeing, our modern posture that distrusts sensuality and delight, pleasures now stigmatized. “The current Renoir aversion,” she states, “more than reflecting the actual goodness or badness of his art, reflects shifting cultural politics, a change in American art theory and practice, and a change in our attitude towards pleasure in art. Pleasure, once celebrated, now sets off alarm bells. It must mean kitsch, or misogyny, or bourgeois blandness, or, even worse, that we are not serious viewers of art.”

Lucy argues that the current cultural orthodoxy is a passing historical moment rather than the natural realization of our moral progress, and she defends Renoir’s works as occasions for unapologetic pleasure. Lucy challenges the assumption that Renoir’s paintings are instances of the objectification of women through the “male gaze,” but she does not interrogate the gaze itself. The male gaze, Lucy notes, is “really a theory about the power dynamics that are embedded in the very act of looking.” It is, above all, “a pleasure that belongs to the artist and the viewer rather than the people represented in the paintings.” 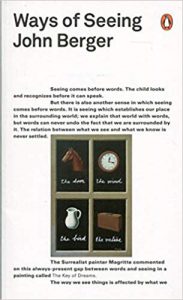 This gaze is, for Schjeldahl and many contemporary feminists, necessarily unethical because it turns women into passive objects and men into controlling subjects. Of course, those familiar with John Berger’s seminal 1972 text Ways of Seeing will know that the male gaze is not simply a way that men wield power over women, but that women use the gaze themselves as a way to gain power over men. If you haven’t read the book, a visit to any bar on a Saturday night will tell you much the same thing. What Schjeldahl has failed to appreciate is that the male gaze is not exclusively about power, but about the fantasy of having such power. The male gaze is the yearning of men to see the world as they wish to see it.

Schjeldahl’s objections to Renoir’s nudes are, on the one hand, that they do not cater to his gaze enough (which is a curious position to take if you’re critiquing the sexist attitudes of the painter), and, on the other, that Renoir painted the women who modelled for his nudes as he saw them. Renoir expresses, writes Schjedahl, an “indifference to the women as individuals with inner lives. They aren’t subjects, only occasions. (His models were often amazed at how little they recognized themselves in pictures that they had posed for.)” Here, Schjeldahl identifies one of the defining moral problems of our cultural moment, but it is not, as he thinks, the objectification of women via the male gaze. It is the notion that the way an individual sees her or himself is the way others too must see her or him.

This is what philosopher Matthew B. Crawford describes as “the sameness of mass solipsism rather than true individuality.” It is an expression of our need to differentiate ourselves from society by rebelling against it in some way, so that unrestrained individualism becomes our highest good. But unlike true rebels, we define our uniqueness by tearing off the restraints imposed upon us by society, and then require that same society to validate our rebellion and embrace our unique way of seeing ourselves. This way of seeing cannot be interrogated because it is an entirely inward and hidden experience. It is what Freud called infantile narcissism. The male gaze is passé; the inward-gaze is nouveau. It is an isolating way of seeing, and its results are anxiety and loneliness.

Feminism is especially culpable in its assertion that the “male gaze” is an instrument of sexual objectification and oppression. It can be this. Of course. But to suggest that it is only this is to cut ourselves off from each other and the social bonds that can occur when we let go of our infantile narcissism. To insist that men are wrong to see women in any way other than how they wish to be seen by men—that is, how women inwardly see themselves—prevents us from reaching a fuller understanding of ourselves that can only occur when we begin to see ourselves socially and relationally. But it is also an impossible task—how exactly are men to start seeing women as women see themselves?—and can lead men to feel resentment against women who feel the need to punish them for being, after all, just who they are.

Coincidentally, two weeks ago, just shortly after Schjeldahl’s essay came out, I was in Paris with a friend, visiting the Muse D’Orsay and taking cheerful, unsophisticated pleasure in Renoir’s art. As we were admiring an Impressionist work (in this case, a Degas), my companion turned to me and asked, “How would you like to be painted by one of these artists?” My spontaneous response was, “Never! To see myself as an artist might? No thank you.” I understand the discomfort our culture has about losing one’s sense of self-determined individuality. It would take courage and a true sense of individuality to see myself as an artist might see me. It’s a risk: what if I look hideous? Or have my faults exaggerated and displayed? It is also a risk to my sense of selfhood to see myself as a man might see me. What if I am an object for sexual fantasy? (What if I’m not?) It is in fact a risk to simply see myself as another individual might see me. But I think, upon reflection, that I would like to be painted. It would unsettle me. Good. Like all of us, I tend toward self-centeredness anyway. I would likely learn something new about myself by becoming the object of another’s gaze. I would also learn something about the gazer. Oscar Wilde reminds us that “every portrait that is painted with feeling is a portrait of the artist, not the sitter.” It is the painter who reveals himself.

Contemporary feminism insists that men and the male gaze objectify women, thereby making men into the powerful, brutish, and oppressive monolithic force we commonly know as “The Patriarchy.” Yet the male gaze often reveals men’s vulnerable side. The way they see reveals not their power but their yearning; their desperate need for tenderness in a world that can be hard and unkind, and which turns men into cogs within the economic machinery. What hegemonic theory now sees as “worse than misogyny” is nothing more than the opposite of androgyny. Do we think the economic and political forces of this world view its producers gently, as fully formed subjects to be treated with kindness? The mountain of corpses and the catastrophe of history, otherwise known as the twentieth century, tell us a different story.

Schjeldahl objects to Renoir’s later nudes because they are painted with “brushstrokes like roving fingers.” Yet what we see on Renoir’s canvases are not instances of “primordial” sexism. Instead, they are a record of Renoir’s deep longing for the kind of soft touch that only a woman can give, a softness that the world of Renoir’s late nudes of 1910-1919 desperately needed as it tumbled into war and insanity. The paintings of buttery skin, of the ripples of yielding flesh, of the exuberant female bodies that, as Lucy points out, can barely be contained within the frame of his paintings, have nothing whatever to do with the heart of a cold sexist or a slavering misogynist—they represent the aching assertion that beauty is good and abundant and real even in the midst of an ugly world.

Renoir’s nudes are the evidence of a tirelessly hopeful soul struggling against the dingy reality of the modern world, with its modern industry and its modern warfare, that turns all human flesh into disposable objects, without joy or humanity. These are paintings of yearning and of hope and through them Renoir can still instruct us, and breasts and buttocks may save us all.

Dr. Marilyn Simon is a Shakespeare scholar and university instructor. She is currently working on a book entitled "Fucking: An Inquiry."