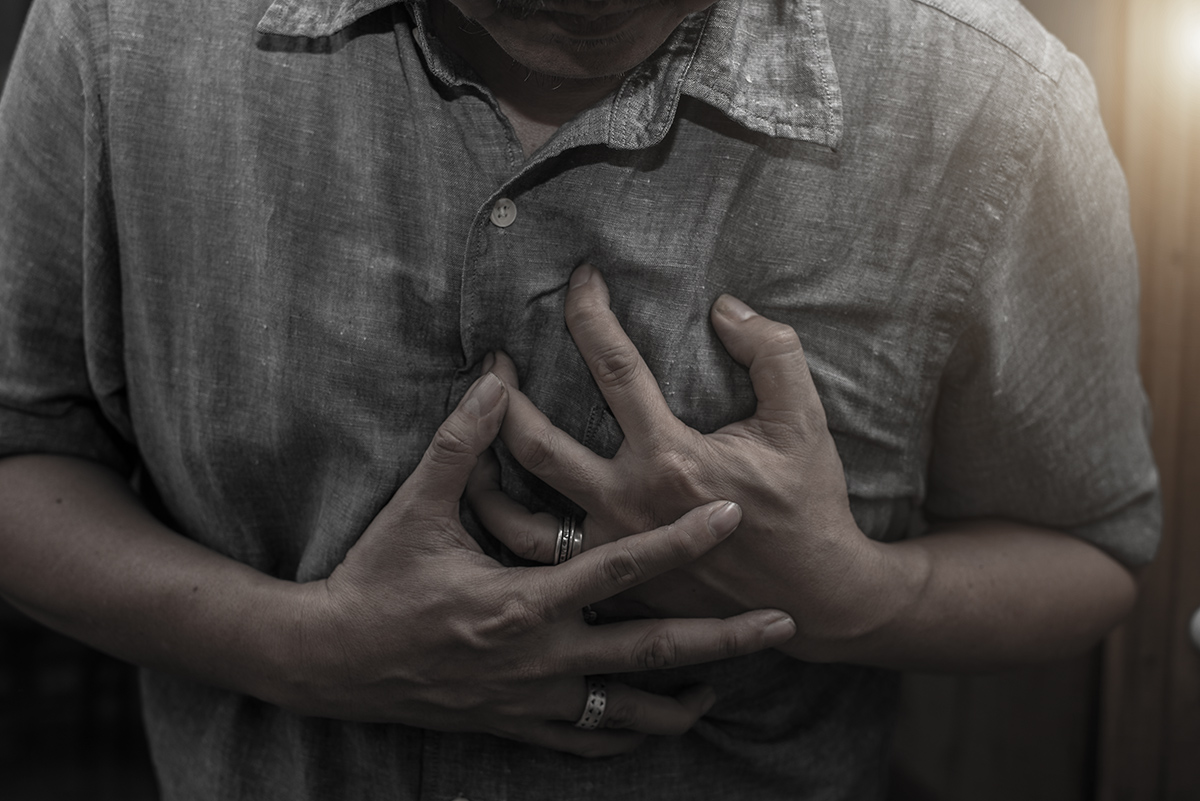 Because I’m that guy, I took a poll at the recent family barbecue.

My mother-in-law remembered hearing about how heart disease affected women more than men during the February American Heart Association (AHA) “Go Red for Women” campaign. Apparently, the message wasn’t heard by the men at this family gathering. They were moved by stories of men—fathers, brothers, friends—they knew who died from heart disease. We are taught that facts should trump feelings, evidence should trump anecdotes, and at first glance it would appear the men are too in touch with their feelings.

It is the mission of advocacy organizations like the AHA to raise awareness. Charts like this one are widely disseminated and used in countless presentations on the topic:

Mortality in this case is best judged by death rates that take into account age and the population at risk rather than the crude number of deaths. The following table assembled from the CDC database for heart disease deaths by gender and age group for the year 2000 paints a more descriptive picture. The number of men dying from heart disease exceeds women in almost every age group. It’s not even close.

The absolute number of men dying in the prime of their lives is staggering. Between the ages of 35 and 64, 92,000 men die every year, which is twice as many men as women, and equivalent to those who died in the Korean War and Vietnam War combined. Even after the age of 75 when more women die than men in total, men die at higher rates because there simply are far fewer men left alive. The gap in numeric deaths in 2000 only exists because of the over-85 age group, where many more women than men die. Put another way, when elderly women eventually die, they die of heart disease.

A better way of representing mortality data to avoid this type of misinterpretation is to use the age adjusted mortality rate—a weighted average that takes into account mortality within age groups and the important denominator of people at risk of dying.

The following chart plotting the age adjusted mortality rate by sex is more accurate, though less politically convenient. Men have been dying at higher rates than women over time, and the gap appears to be constant.

To be clear, heart disease in women is well-deserving of attention. While the large portion of deaths do occur in women in later years, cardiovascular disease remains an important contributor to female mortality even at younger ages. As noted in the chart and graph below, cardiac disease is the second leading cause of death even among women aged 35 to 64, though again, at absolute rates far lower than their male counterparts. The wider public certainly needs to be aware that men have no particular ownership of cardiovascular disease, but the messaging to try to raise awareness of cardiac disease in women is misleading.

A good clinician chooses a diagnostic path based on an understanding of underlying risk. The 20-year-old with chest pain gets a different workup than the 55-year-old with chest pain. If the risk of death between men and women varies by a factor of two in the 35 to 64 age group, is it cause for alarm if men are worked up for heart disease at different rates by their doctors?

This wouldn’t be some sort of controversial sexist departure from standard practice. Every day, cardiologists use risk calculators with the difference in cardiac disease rates by sex baked into the algorithms to help decide if patients may be candidates for drug therapy like lipid lowering statins. The higher the risk of a heart attack, the higher the yield of drug treatment.

As an example, the commonly used cardiac risk calculator below was used to calculate risk on two patients. The only difference between the two patients is their sex. The man meets the threshold for therapy with a statin, the woman does not. Is the algorithm sexist?

Since it is the mission of professional organizations like the American College of Cardiology and the AHA to promote the importance of the disease they represent, messaging campaigns to identify lower risk groups that should be screened less aggressively are likely not to be on the menu in the foreseeable future. But the peculiar trend as reflected in remarks by prominent cardiologists is to specifically accentuate both screening for cardiac disease in women, and the possibility that the care women receive is inferior to men.

Examining a few of the pillars this claim rests on is revealing. One commonly held notion is that women may not have the hallmark symptoms of a heart attack—chest pain or discomfort—that has typically defined the disease. The theory goes that approaching women’s complaints with a typical “male-derived” framework of expected symptoms of heart disease may result in delays and subsequently poorer outcomes. But an attempt to source the frequency of atypical presentations by sex suggests that the complaints of women and men when it comes to heart attacks may not be that different.

A summary of a number of large trials that included the clinical presentation of heart attacks by sex demonstrates that 28 percent of men and 37 percent of women presented without chest pain. A difference to be sure, but not enough to recommend a different and more aggressive screening strategy for women when the underlying disease being screened for appears to be more indolent in women. Curiously, the same crowd that finger wags about overtesting and overdiagnosis is silent here. The hallmark of this genre of research seems to be that the message matters more than the evidence.

Honing the Evidence to Match the Message

Consider a recent article published in the Journal of the American Heart Association that seeks to study differences in the treatment between men and women. The article focuses on two important times—the time from symptom onset to a blocked artery being opened, and the time from arriving at the hospital to opening the problem artery. The article is presented as more proof of a sex-based difference in treatment of cardiac disease because it finds a statistically significant delay in time to treatment women.

The path to statistical significance in this case is courtesy of log transformation of the raw data that is notable only because its need arises from the treatment times between men and women being clustered in such close proximity to one another.

It’s no surprise then, that the statistically significant delay in the time between hitting the doors of the hospital to opening the blocked artery amounted to just seven minutes. The time between symptom onset to therapy was longer, approaching 30 minutes for women. The study implies that delays for women result in worse outcomes. But while these times are statistically significantly different, no correlation between these time delays and poorer outcomes was found, arguing against the delays being clinically meaningful. Only in passing does the study mention that the delays are not correlated with poorer outcomes, a fact that would suggest other mechanisms account for the gender outcome gap. For example, women presenting with heart attacks are certainly older and may be sicker in ways that can’t completely be adjusted for.

There are also two types of heart attacks (STEMI/NSTEMI) that were studied—the more serious kind identified by electrocardiogram (STEMI), and the other kind typically identified by cardiac enzyme markers found in the blood (NSTEMI). Interestingly, only the more serious type of heart attack observed a delay in treatment by gender. If gender really does have such a powerful impact on delays in getting appropriate care, it seems strange that the effect is not seen with the less serious type of heart attack, especially as there’s more room for variation in the treatment of these heart attacks.

The paper, like many in this genre, is a masterpiece of confirming bias while glossing over the fact that, in the three years of study, more than three times as many men presented with heart attacks. And perhaps the most important information in the paper also gets lost: only 65 percent of women and 69 percent of men were treated within the widely accepted 90-minute target time for the opening of an artery. Instead of a call to action to improve these numbers for all, the authors choose to focus on the “statistically significant” four percent difference between men and women.

In a twist of black comedy, despite the fact that one reason proffered for the longer time for women between symptom onset and a health system encounter is that women live alone at higher rates without a companion to activate emergency services, there is no mention that a potential solution might be to try and keep more male companions alive. This is not a message likely to find currency in a paper meant to highlight female disadvantage.

Politicians and salesmen have long understood persuasion is the art of bending facts to support a side. The surprise here is that this pablum is coming from within the academic class, a venerated and trusted group. The facts don’t stand a chance against those who see the world through a lens of patriarchy and male privilege. At the very least, one would expect the intelligent designers of this one-note world to recognize a failure of the male patriarchy when it occurs in as spectacular a fashion as happens with men and heart disease. In what can only be described as a landslide victory for the matriarchy, men turning 35 are half as likely to make it to 45 as their female counterparts. The same dismal statistic awaits men who make it to 45, and those who make it to 55. Inexplicably the messaging on cardiovascular disease somehow white-washes all of this.

The story of historical female systemic disadvantage is a very real one but the presence of a long list of bonafide grievances gives no license for the creation of new grievances based on bad analysis. Men die of heart disease at rates that are well beyond women.  Full stop. The roots of this gap are likely rooted in biology; controlling for traditional cardiac risk factors like serum lipid levels, blood pressure and smoking seem to have no impact on the poorer outcomes seen in men.

In the end, the decision on testing and therapy is a tricky one. I recently took care of a physician’s wife who had developed exertional dyspnea and fatigue. Despite negative initial testing pointing away from her heart being the culprit, the knowledge she belonged to a relatively lower risk group didn’t stop her from getting a coronary CT scan that was prompted in part by an anxious and loving husband who knew all too well about women and their atypical presentation. I ordered it with some misgivings about the cascade of further diagnostics and treatment that carry their own very real harms when one proceeds down a path of testing low risk patients. Luckily, the odds being in her favor, the test was clean.

But played out on a larger scale with an anxiety ridden populace and their physicians searching furiously to stamp out the epidemic that isn’t, we may very well end up doing more harm than good. In the battle between biology and created “truths” that arise from the perceived grievances peddled by a coterie of motivated academics, I have a simple recommendation: Choose biology. It’s the best thing for men. And women.

Dr. Anish Koka is a board-certified internist and cardiologist practicing in Philadelphia. He can be followed on Twitter @anish_koka.