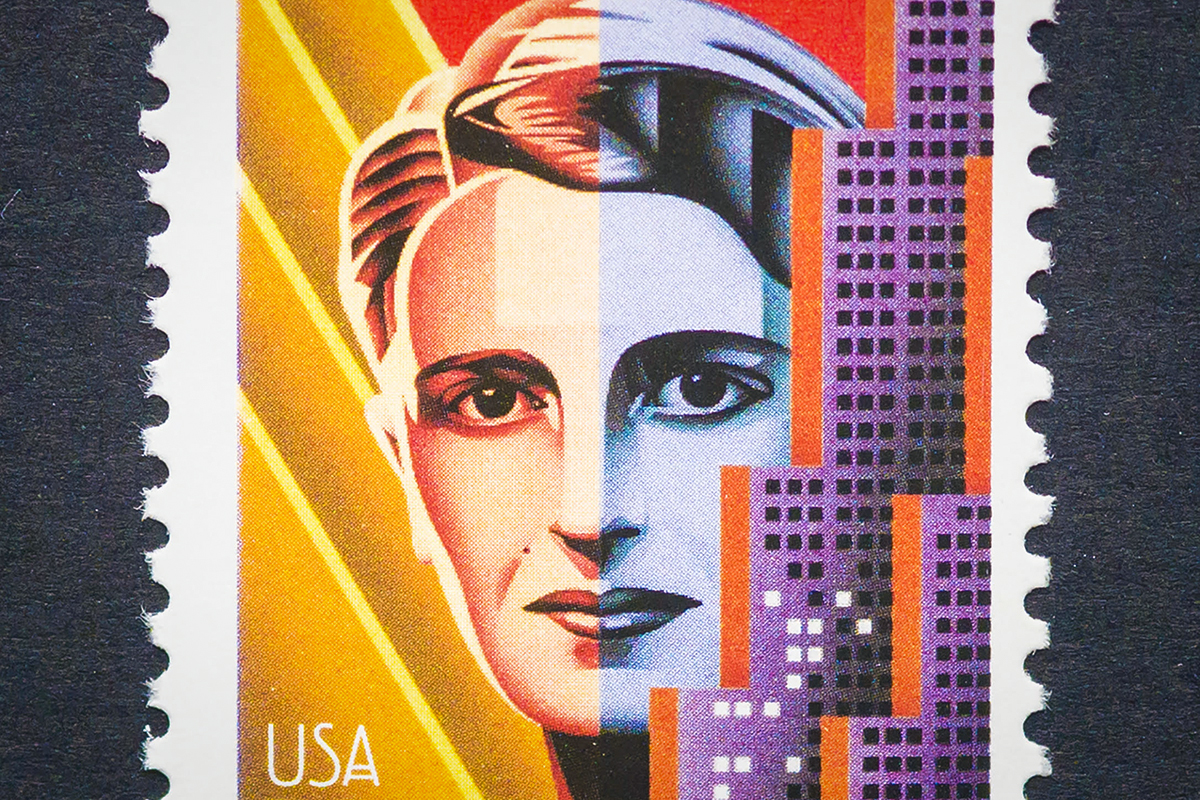 Few public figures have managed to consistently attract both sheer adoration and abject disgust quite like Russian-American author Ayn Rand. Fewer still have created an intellectual legacy with as much endurance as her radically individualistic philosophy of Objectivism.

Atlas Shrugged remains a cherished favorite of venture capitalists and libertarian-leaning politicians all over the planet, with a notable stronghold in Washington D.C., perhaps even within the Oval Office itself. Rand’s literary influence is often derided as a mere reflection of the tractability and moral certitude afforded by her novels, her economic principles disregarded as patently ridiculous. Galt’s Gulch has attracted so much scorn as to become something of a joke, a way to easily scoff at the naive utopianism of laissez-faire capitalism. Rand and her largely philosophical economic views have been consigned to history as an interesting relic of sorts—a compelling, well-articulated fantasy that has no basis in reality. How then should we interpret new research from the Nation Bureau of Economic Research (NBER) that suggests her controversial description of the income inequality dynamic might have been mostly true?

Digital Innovation and the Distribution of Income https://t.co/n0dD0s3QFN

"most top earners are working rich: they derive most of their income from human capital, not physical or financial capital." https://t.co/DjKq1BIeTd

Dan Riffle (self-styled “policy guy” for Democratic congressional wunderkind Alexandria Ocasio-Cortez) currently has the interesting Twitter display name of “Every Billionaire Is A Policy Failure.” The phrase is both pithy and prophetic, at least to the extent that it reveals quite a bit about the political direction that seems most attractive to the more radical elements of the Democratic party. This nascent redistributive agenda is not particularly surprising—decades of real wage stagnation has co-occurred alongside trends indicative of wealth concentration and rising inequality, factors that painfully and repeatedly highlight the enormous and extremely variable proliferation and influence of wealth in American society.

Farhad Manjoo, writing in The New York Times, was recently granted a front page spread to opine on the merits of abolishing billionaires.

I don’t think this article would have been written or published a year ago.

Prevailing political wisdom seems to indicate that this unpleasant issue of wealth inequality is inherent to every capitalist economy, more so given rapid technological progress and the automation of manual work. The question that politicians are increasingly compelled to answer is—what should be done? Assuming that extreme wealth and inequality is the result of grift and luck leads to dramatically different policy than accepting that extreme wealth itself might be reliably correlated with net-positive economic outcomes.

Any attempt to drastically alter the distribution of wealth in an economy necessarily starts with the premise that the current distribution is fundamentally unjust, or at the very least socially undesirable. French economist Thomas Piketty summarized the problem neatly in his hugely influential book Capital in the Twenty-First Century—when returns to capital exceed the rate of economic growth (formalised as r>g – as has largely been the case in America) inequality will worsen as capital income accumulates and concentrates amongst a shrinking cohort of inordinately fortunate capitalists. Thinkers of a Pikettian bent are primarily opposed to such a dynamic because it is suggested to be inherently unstable, rendering society increasingly prone to civil and political turmoil.

In contrast, Manjoo, Ocasio-Cortez (and a large number of potential Democratic presidential nominees) oppose wealth inequality mostly on moral grounds, as positive proof that wealthy individuals enact mass exploitation and economic misery thanks to a complex system of oligarchy and nebulous political influence. Simply put, the core of wealth inequality is commonly purported to be the returns that accrue to beneficiaries of unfair legislation or those who simply enjoy the ownership of capital without undertaking any kind of productive economic activity. This is also a view supported in principle by Piketty and largely the Democratic party as a whole—a view that is now almost entirely accepted as economic fact. Indeed, it seems fair to say that the Democratic party has something of a friendly relationship with Piketty—he’s previously participated in an interview with Elizabeth Warren, expressed his admiration for the politics of Bernie Sanders and earned a nod from Hillary Clinton herself. His name appears to hold considerable weight amongst the Democratic establishment.

Alarmingly, recent research on the matter raises the prospect that Piketty may be almost entirely wrong, in that income inequality is primarily driven by labor income that is realized as profit by owner-managers of mid-market firms. This is a mechanism consistent with Rand’s basic premise—that extreme incomes are predominantly earned as a function of the exceptional abilities and efforts of skilled entrepreneurs, not by a class of passive capital owners. Piketty does recognize that entrepreneurs may generate extreme incomes via their own efforts, however he also warns that such entrepreneurs tend to accumulate the capital that precedes the creation of a rentier class and entrenched wealth inequality. The NBER view suggests this warning may be unnecessary, as the primary source of income inequality is demonstrably earned business income—income ultimately attributable to the labour efforts of skilled owner-managers that does not remain tied to any particular stock of capital nor persist through multiple generations.

Furthermore, Piketty’s famous inequality, r>g, may yet prove to be less important in itself given the recent strong performance of the U.S. economy. While the NBER data suggests that Piketty’s view of wealth generation and accumulation may be somewhat misspecified, persistent economic growth may yet prove to render his conclusions impotent on their own terms—his central thesis recognizes that income inequality is suppressed during periods of high economic growth. Given the recent performance of the U.S. economy, Piketty may yet live to regret or even update one of his own conclusions—this being that there is no reason to believe that the long run economic growth rate can exceed 1 to 1.5 percent annually. The Trump administration has so far succeeded in overseeing a period of economic expansion that Piketty himself would admit is highly unusual and inimical to rising inequality even in the absence of any specific policy.\

In any case, the assumption that extreme variance in income or wealth is largely due to market or regulatory failure renders highly progressive income tax regimes or statutory wealth taxes tremendously popular amongst both Democrats and Republicans. Ocasio-Cortez is promising an aggressive top marginal tax rate of 70 percent (for those lucky enough to earn over ten million annually) while Elizabeth Warren is exploring a wealth tax of 2 percent. Despite their political appeal there is no particular reason to expect that these taxes would alleviate inequality in America—firstly, because high earners (especially those deriving income from capital) don’t pay tax in the same way as wage earners do, and secondly because such taxes often fail to deliver the desired outcome in practice. The French socialist president Francois Hollande was famously forced to abandon his 75 percent income tax in 2015—despite the tax enjoying the overwhelming popular support of French voters, as it raised very little revenue.

Indeed, this may not be surprising—the average voter is, by definition, not extremely wealthy, and the rich can often use their considerable resources to avoid tax or move somewhere with a more amicable tax regime. Rand extensively argued that progressive taxation and all other forms of redistribution were ultimately harmful, and that a healthy, thriving economy will necessarily involve a class of hyper-rich capitalists. However, any evidence for the empirical plausibility of Rand’s work carries the politically toxic connotations of being pro-greed, pro-inequality and anti-worker.

In essence, the current political debate on the issue of inequality is an attempt to provide an answer to a normative moral question—one that rests upon the assumption that no-one truly deserves to be a billionaire, or earn an income that exceeds some arbitrarily high threshold. The danger in this thinking lies precisely in what is assumed, and the consequences of enacting policy based on potentially false assumptions. While it may be true that the mere existence of billionaires and extreme wealth disparity is a reliable source of some social discontent, it must be first examined whether addressing this discontent (as part of a legislative agenda) will ultimately prove worse than allowing the discontent to remain while enjoying the diffuse economic benefits that are often associated with extreme individual wealth in the first instance. The NBER research overwhelmingly suggests that not only do high-income individuals work to accrue their wealth, their businesses suffer and often close after they cease to be involved in management. This is entirely antithetical to the growing popular consensus that inequality is tightly correlated with exploitation and systemic inequity.

Wherever this debate may lead, the name Ayn Rand is likely to remain highly unsavoury in political circles. Paul Ryan famously retracted comments he’d made about enjoying Atlas Shrugged, such was the negative reaction he received when it was rumored he asked all his staffers to read it. However, on the specific topic of wealth generation and income inequality her work must not be overlooked—as much as it might be painful for some to admit, on what may prove to be the most politically charged issue of the 2020 election, she might have had a point all along.

Cameron Hendy is a political commentator living in Melbourne, Australia.