You probably have felt afraid to speak your mind freely at some point. Whether it is in a university class, a meeting at work, or amongst friends online, it’s likely that you have remained silent when you have had ideas or opinions that haven’t conformed to received wisdom.

This is not an unusual or maladaptive response. In fact, knowing when to stay quiet and knowing how to avoid conflict is a necessary and important part of being an adult. Most arguments are pointless and there is no reason to get into fights with people whom we otherwise want to cooperate with and build mutually beneficial relationships.

Nevertheless, I worry that intellectual self-policing is happening more and more often, particularly for those living in tight-knit and politically homogenous communities. In such environments, challenging the prevailing ideological orthodoxy—even if it’s only to plead for more tolerance of diverse viewpoints—can lead to reputational damage, harassment, and, in some cases, career suicide.

Today, these strictly enforced thought codes are pervading spaces where naturally open-minded and liberal people work, such as academia, media and the arts. Complying with these repressive codes and, worse, being expected to report those who breach them, sticks in the craw of people with naturally liberal predispositions—even if they share many of the progressive aims of those who enforce these dogmas.

In a lengthy blog post on his website, the writer and psychiatrist Scott Alexander (his website Slate Star Codex is a near anagram of his name) describes how his life was derailed by those who harassed him over comments made on a Reddit forum related to his blog. The full background story and blog post can be found here, but the short version is that because right-of-centre people were not completely banned from the thread, and because discussions which were actually diverse took place, people were able to point to the small percentage of comments that included those they consider beyond the pale–hereditarians, anti-feminists, etc.—and claim that the entire thread, and Scott himself, was racist and misogynist, among other sins.

Scott points out that it was not trolling that got him (and the forum) into trouble. It was people expressing themselves in a civil, reasonable way:

The fact is, it’s very easy to moderate comment sections. It’s very easy to remove spam, bots, racial slurs, low-effort trolls, and abuse. I do it single-handedly on this blog’s 2000+ weekly comments. r/slatestarcodex’s volunteer team of six moderators did it every day on the CW Thread, and you can scroll through week after week of multiple-thousand-post culture war thread and see how thorough a job they did.

But once you remove all those things, you’re left with people honestly and civilly arguing for their opinions. And that’s the scariest thing of all.

He goes on to describe the distress that was caused by months of harassment and misrepresentation of the forum, his blog, and himself. He describes friends of his being called up and harassed as well as people contacting his workplace trying to get him fired. He eventually decided, in consultation with the thread’s moderators, to shut it down. He gives several reasons for writing about this decision, a step he did not take lightly. He knows that to reveal how much pain the harassers have caused him (a nervous breakdown) will only embolden them. One of the reasons he gives for his post is to prove to others that people really are self-censoring. He thought he would provide at least one example: himself.

[I]f someone speaks up against the increasing climate of fear and harassment or the decline of free speech, they get hit with an omnidirectional salvo of “You continue to speak just fine, and people are listening to you, so obviously the climate of fear can’t be too bad, people can’t be harassing you too much, and you’re probably just lying to get attention.” But if someone is too afraid to speak up, or nobody listens to them, then the issue never gets brought up, and mission accomplished for the people creating the climate of fear. The only way to escape the double-bind is for someone to speak up and admit “Hey, I personally am a giant coward who is silencing himself out of fear in this specific way right now, but only after this message”. This is not a particularly noble role, but it’s one I’m well-positioned to play here, and I think it’s worth the awkwardness to provide at least one example that doesn’t fit the double-bind pattern.

As long-standing admirers of Slate Star Codex, we would like to express our sympathy and solidarity with Scott. Needless to say, he is not a racist or a misogynist. On the contrary, he is one of the most insightful, reasonable, open-minded, genuinely progressive voices on the Internet. He has now made a full recovery and will continue to blog—and the thread he was forced to disassociate himself from is now continuing under a new banner and can be found here. Courage, mon frère. You have more friends than you know.

For the past three years, essays written and published on Quillette have nucleated around the core value that free thought must live. The idea is simple. All one has to do is put pen to paper (or fingers to keyboard) and construct a well-reasoned argument—with consideration given to available evidence—and share it with others as widely as possible—and the intellectual legacy that was handed down to us by our forebears will be preserved and shepherded into the future for our descendants.

Quillette is an old French word for a wicker tree off-cutting that, when planted in the ground,  grows into a willow tree. Similarly, one original idea can grow from these humble beginnings into something long-lasting and majestic. A ‘quillette’ also represents the potential for rebirth and new life emerging from old.

The unpleasant reality that we must face today is that there is a small subset of hard-line ideologues who oppose open discourse altogether. The fact that you may not feel comfortable speaking your mind openly, and may feel afraid of serious consequences, is viewed by these people as an accomplishment. It is easy to ignore this reality, but when it harms people we admire, and threatens to stifle earnest discussions taking place in good faith, this reality must be dealt with head-on.

Their position is that debate “normalises” unsavoury people and that to platform anyone with right-of-centre views is the equivalent to “legitimising Nazis”. This fanatical minority is tiny in number but has successfully cowed university administrators, corporate leaders, and countless thoughtful people into silence. So successful are their tactics, they have even instilled climates of fear in institutions that were established with the explicit purpose of defending free thought. If these institutions cannot resist such vandals, who can? 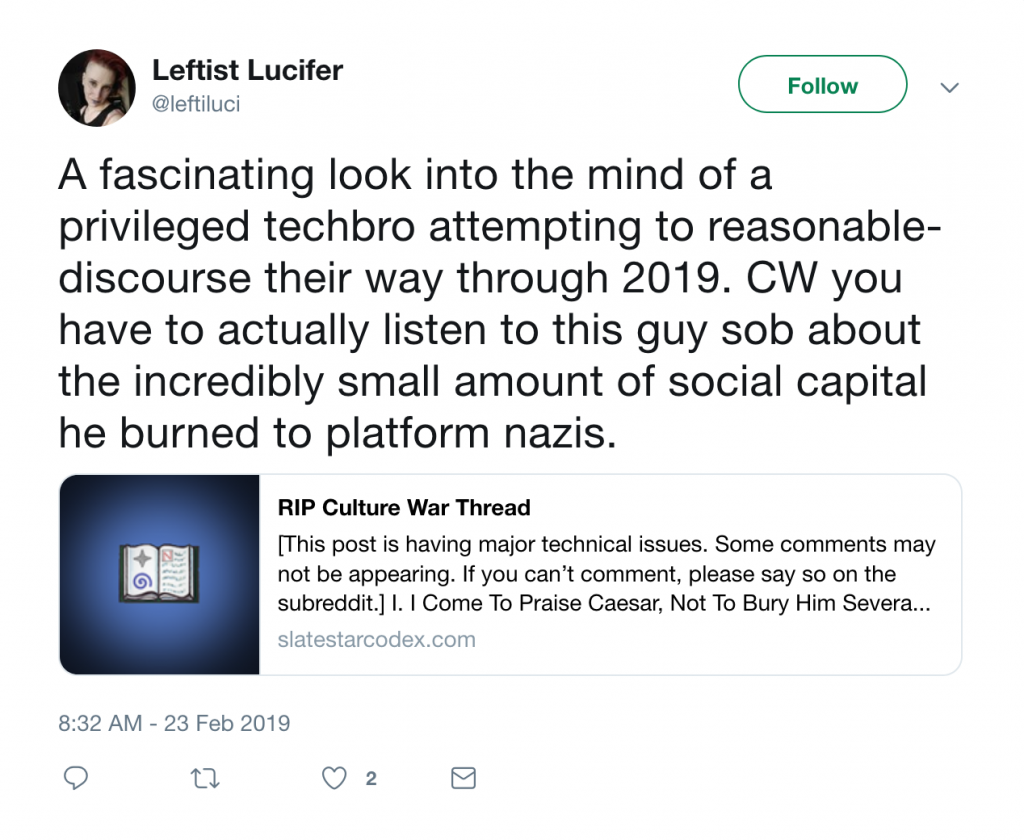 At Quillette we defend free thought—with words—because that is all we have, and because that is what civilised men and women do. And we do it with ideas and counter-arguments, not ad hominem attacks designed to run people into the ground.

The problem we face now is new. Social media and ideological rigidity are combining to create a threat that our societies have not encountered before. We must adapt quickly to deal with the challenges at hand. The university—an institution which was originally set up with the purpose of defending free thought—has failed in this mission too many times in recent years to inspire much confidence. So we must not be complacent. Where the responsibility for defending free thought has been skirted, others, including you, dear reader, must pick up the slack.

One might reasonably ask the question: what does it matter if an obscure culture war thread was shut down and the blogger associated with it experienced distress? Isn’t this the risk you take if you venture into the public square? What does it matter if a forum closes, if we can continue to live in nations that have free markets as well as scientific and technological progress?

It matters because forums that give rise to organic intellectual discussion are ground zero for free thought. Scientific and technological progress cannot happen without people thinking freely—so to clamp down on it is to clamp down on progress itself. One could argue that such forums have parallels with the salons which sparked the French Enlightenment or the coffee houses where Scottish Enlightenment thought catalysed. The cross-pollination of ideas is important. While this used to happen within the university, it is now increasingly happening online.

It also matters because the people who are shutting down open discourse are sadistic bullies and we cannot let them win. While many of them actually enjoy causing others distress—a frightening realisation—we must also remember that they are a small minority. And while the rest of us may never match their vindictiveness and underhanded tactics, we do have numbers on our side. All people—whether they are apolitical, conservative, libertarian, centrist, moderate or progressive-left—can join together to oppose this new threat to free thought.

To do so, you can start by speaking and writing plainly, and with raw honesty and courage. Share your inner thoughts and support those around you who speak frankly. You should write well-reasoned arguments for your positions and spread them widely. Don’t be afraid of criticism. Criticism helps us grow. Have the confidence to know that there is nothing more penetrating than the human imagination and the human capacity for reason. From the most dazzling scientific and medical breakthroughs, to works of art that transform people’s lives—all of these first emerge from the interior worlds of individuals. That individual may be unknown, unrecognised, underprivileged and lacking in confidence. That individual may be you.

One of the most important steps in this process will be execution and distribution. That is where we can help. As long as Quillette exists, we will work with you to shepherd new ideas and thoughtful conversations into public view. While other institutions may buckle under attack, our raison d’être is to preserve Quillette as a space where free thought lives.

If you want to help free thought live, please consider supporting our mission.