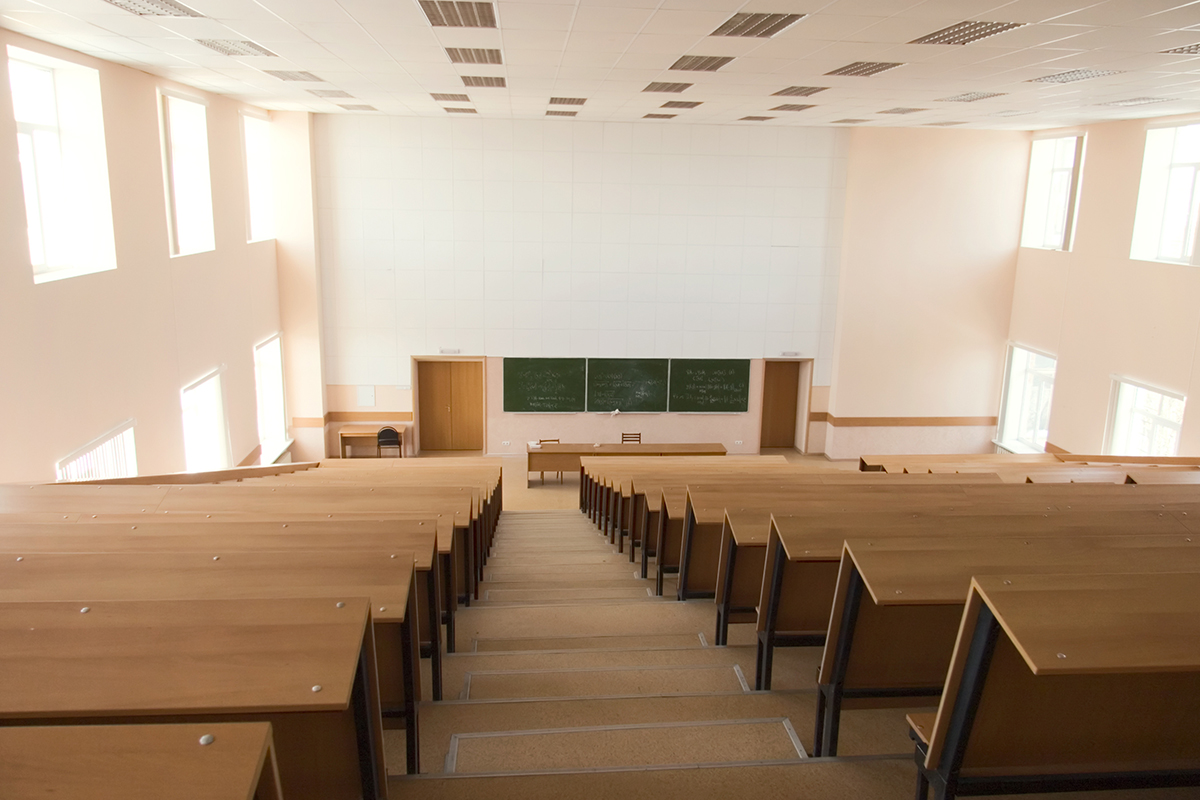 On January 22, a portion of the unionized faculty at Wright State University (WSU) in Dayton, Ohio went on strike. WSU is a regional state university with a medical school, several units that award PhDs, and many that grant master’s degrees. It has many nontraditional students and pockets of true excellence; it is a national leader in educating veterans and the disabled, for example. It is also where I have taught economics for almost a quarter-century.

I applied for and received sabbatical for this year some time ago and so, as the strike has dragged on, I have watched this drama unfold at both a physical and emotional distance. The strike has been the culmination of years of bitterness between the faculty union (not, note, the faculty) and the administration. It is widely believed that the root cause of the strike was stark differences between the union and the administration over how to overcome a severe financial crisis earlier in the decade that was unquestionably the fault of previous administrators, yet has impacted the entire university. But, while the crisis is real, the root causes of the strike are longstanding, deep, and perhaps informative about both the current state of faculty unions and the future of universities like WSU. Readers should know I am not a union member because I object to coercive unionization. So, while internal union communication is available neither to me nor the general public, their point of view is freely available at their Twitter feed, which has, in part, shaped this essay.

Soon after I arrived at WSU, I was greeted with a referendum for tenure-line faculty, who were to choose whether to authorize collective bargaining through the local chapter of the American Association of University Professors (AAUP-WSU). AAUP is an organization with a long history of defending academic freedom as they define it on the one hand and chartering unions at individual universities on the other. Collective bargaining was defeated then, but was resubmitted and approved soon after. Subsequently, the union and WSU negotiated a series of three-year contracts. Traditionally, negotiations on the next contract would begin in the last year of the current one, and agreement was usually reached before the current contract expired.

But earlier this decade, high-level administrators made numerous irresponsible financial decisions and, in addition, WSU was forced to pay a large fine for violations of immigration law. So the most recent negotiations, which began in January 2017, were conducted under this cloud. When no agreement was reached, initially the existing contract was extended for one year, but, after a total of 15 months of negotiation, the administration broke off what it saw as fruitless talks. Meanwhile, several senior administrators whose decisions caused the mess were removed, and WSU adopted a much harder line, eventually unilaterally imposing terms that accepted many union demands, but not with regard to health benefits. In the interim, WSU had accepted and AAUP-WSU had rejected a compromise settlement offered by an independent fact-finder, which is non-binding arbitration required under Ohio law before public employees can strike.

And so here we are. Truth being the first casualty of many conflicts, the two sides disagree on how many courses have had to be canceled, but the university is now trying to devise steps to help students due to graduate actually do so. And if another long strike in 1991 at Temple is any guide, WSU can expect to pay a substantial enrollment penalty for this self-indulgent interlude. But whereas faculty and administration at the time at Temple were arguing over how big raises should be, we do not have that luxury.

What is the reason for the extended stalemate? Media coverage, for example at NPR and  the Chronicle of Higher Education checks all the journalism-school boxes in terms of quoting both sides. But while the university’s rationale for its hard line is presented in some detail, the history of the dispute is never presented at all. (Earlier the union had raised academic-freedom issues, but in the face of some university concessions this talk has largely disappeared.)

This history suggests another explanation, which has been left unexamined—that radicalized union leadership is part, perhaps the primary part, of the problem. Since its founding, AAUP-WSU’s leadership has been more radical than the median WSU professor, let alone the median American. One of the chief negotiators is an emeritus professor of economics, and is thus part of the negotiating team despite not even being employed by the university anymore. For many years before his retirement, he had a large photograph of Karl Marx in his office window, presented for the edification of passersby. Upon his retirement, the portrait passed to another economics professor, also long part of union leadership, and in whose office window it continued to be displayed. (It should go without saying that none of this is a McCarthyite attack on anyone’s academic freedom, but an insight into the mindset of those who brought the university to this point.)

Others in union leadership have also had a fundamentally confrontational vision of the US as a country in which the good guys must always fight to get their fair share. Here, university teachers in 2019 see themselves resembling (the legends told about) the auto workers of the 1930s. The strike began the day after the MLK holiday, and the union, somewhat implausibly, has likened the strike to the causes he fought for. At least at WSU, it is the most radical faculty who are the most driven to lead the union, and so often they do; this is a common feature of special-interest pleading. As to the consequences of a strike, AAUP-WSU leadership has warned of potential costs to abstract future students if the administration gets its way. But while this fearful vision is merely hypothetical, even as university staff increasingly plead or demand that faculty end the strike, real flesh-and-blood students are being damaged by it here and now.

Many union leaders have been oblivious to this fundamental principle. Instead, their way of seeing the world is Us versus Them, an eternal zero-sum struggle between the powerless and powerful over money and authority. It is striking how large administrative pay looms in union members’ statements about why they strike. (And this, even though the new president brought on board in 2017 makes less than her predecessor did. Even if all senior administrators worked for free the financial crisis would be largely unaffected.) The union expresses a theoretical interest in accepting the administration’s changes already imposed on nonstriking faculty (which makes their health insurance benefits now identical to those of staff and administrators), but remains adamant that labor-law procedures be followed to the letter before strikers will resume their primary responsibility, teaching. There is also objection to the fact that our health-insurance premiums, which are higher for employees who earn more, are not progressive enough. The stuff of an interesting discussion around the faculty lounge to be sure, but a major issue?

The union collectively, judging by its demands, also seems unaware of the larger issues facing universities like WSU. In our part of the country, the number of college-age youth is declining. For several years, WSU, like other universities, dealt with this with increased foreign enrollment. For a time it succeeded, due both to agreements by several Persian Gulf states to increase the number of students they sent to the US generally, and by the rise in popularity in recent decades of American degrees, especially graduate degrees, for students from China and India. (These students pay significantly higher tuition than Ohio residents, who are the bulk of WSU’s undergraduate enrollment.) But the Gulf states recently sharply pared the number of students they send to the U.S., and concerns about American hostility to immigrants has decreased foreign applications as well, at least for now.

In a university whose constituencies were thinking about the future, faculty, staff, and administration would cooperate to try to improve the university in the face of these challenges. But, if asked, the union would almost certainly respond, “That’s not our job.” And they would be right; the union is about confrontation, not cooperation, admittedly probably accompanied now by similar attitudes in the administration. But the fact that the union has monopolized so much of the space for faculty–administration interaction makes such cooperative efforts much more difficult than before. Administrators are, in the end, in the union’s view not our colleagues. They are Them.

The administration has certainly made its share of blunders. During the sharp increase in domestic enrollment that briefly followed the 2008 financial crash, spending on such incredibly wasteful projects as lavish buildings increased substantially, even though it was known among WSU professors who study such things that enrollment fluctuates with the business cycle. But no one on the faculty was ever asked if enrollment would stay high, just as they were never asked whether a fancy new teaching building was a worthwhile way to improve graduation rates, as opposed to, say, hiring more people to teach algebra and freshman composition so that sections of those critical courses might be smaller. (WSU’s dream of increasing national exposure and enrollment through men’s basketball glory is an idea of which the current president is fond, despite significant research, if anyone ever sees fit to check, that this strategy often fails, badly.)

Union members would be absolutely correct to say that the financial mess into which WSU has fallen is entirely the fault of particular administrators; no faculty member contributed to these decisions. But they do not say that. Instead, they say something subtly yet critically different—it is the fault of “the administration.” But all decisions are made by individuals, either alone through their authority or through some collective decision-making process. And most of the individuals responsible for this calamity are long gone. To continue to see the problem as faculty (good guys) versus the eternal, formless blob known as “administration“ (bad guys) is to frustrate solutions to our problems. The administration in turn might have been well-advised to propose, say, that everyone with the word “president,” “provost,” “director,” or “dean” in their job title take, say, a two percent pay cut for the duration of the crisis. That would have bought some goodwill. But such a measure would require mutual trust, which has been progressively scarcer since WSU unionized.

I watch from afar with horror as the university into which I have poured nearly 25 years of blood, sweat, and tears self-immolates. And I know from my years of experience that many teachers, including many of the ones on strike, have worked harder than me for WSU and genuinely want their students to succeed. And the same could be said for all of the administrators that I personally know. But student success is an interest that we all share, and therefore has no place in a zero-sum university. Instead, it seems the only thing that unites faculty and administration is that they must destroy WSU in order to save it.

Evan Osborne teaches economics at Wright State University. Most recently, he is the author of Self- Regulation and Human Progress: How Society Gains When We Govern Less (Stanford University Press, 2018)