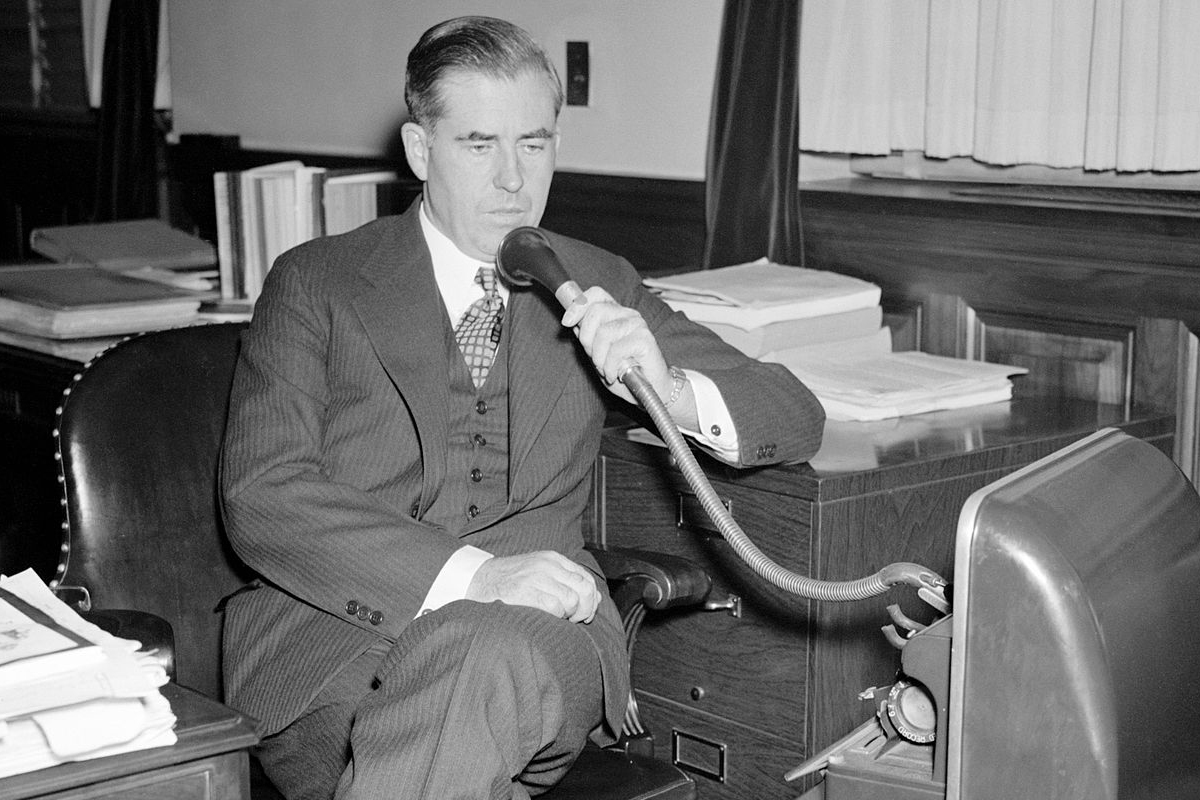 In a January 14 featured article at the Intercept, co-founder and radical journalist Glenn Greenwald rehearsed a stale leftwing talking point, most recently revived by Oliver Stone and Peter Kuznick in their Showtime documentary series, The Untold Story of the United States. For over 3500 laborious words, Greenwald recounts a shopworn tale of an allegedly illegitimate FBI investigation of a sitting U.S. government official. The FBI’s secret investigation of Vice-President Henry A. Wallace began during FDR’s third term, continued when Truman became president and made Wallace Secretary of Commerce, and throughout Wallace’s campaign for president on the pro-Communist ticket of the Progressive Party.

And why did the Bureau decide to carry out this secret counter-intelligence operation? According to Greenwald:

The FBI long suspected that Wallace harbored allegiances to the Kremlin and used his government positions to undermine what the FBI determined were “U.S. interests” for the benefit of Moscow and, as a result, subjected Wallace to extensive investigation and surveillance.

Greenwald has brought all this up again in response to reports that the Bureau was investigating President Donald J. Trump out of suspicion that he could be an agent of the current Russian government of Vladimir Putin. Greenwald argues that there is a “lack of evidence of guilt” in the Trump investigation today, just as there was during the investigation of Wallace in the 1940s.

Intelligence journalist Eli Lake has made a strong case that an investigation of Trump today is a matter for Congress rather than the Bureau, and that FBI investigations have serious and dangerous implications for how our democracy functions. There is, however, clear evidence that Trump has made decisions and statements that benefit only Putin and his expansionist agenda for the Russian state. Greenwald does not discuss these, assuming that his audience will simply accept his claim that “no actual evidence of guilt has yet emerged,” and conclude that the FBI probe is what the Right and the President call a “witch-hunt.”

Trump’s record of deference to Putin has been adequately laid out by David Frum, Max Boot, David A. Graham, and by the editors of the New York Times, so there is no need to repeat it here. What is important is that Greenwald does not even acknowledge this view in his column. As Frum asks: Can Americans “wait to ascertain why Trump has subordinated himself to Putin after the President has so abjectly demonstrated that he has subordinated himself?” It is the kind of question that Greenwald shows no interest in asking.

This peculiar absence of curiosity also informs Greenwald’s treatment of Henry A. Wallace’s story. Greenwald claims that Wallace was only investigated on account of his political views and what he calls Wallace’s “pro-peace beliefs.” He writes:

Wallace was regarded by the FBI as having suspect loyalties because, as Vice President, he repeatedly insisted that the threat posed by Moscow was being exaggerated. He often accused the U.S. Government of disseminating propaganda about Russian leaders. He urged less belligerent and more cooperative relations with the Russian government. He opposed efforts to confront Russian influence it its own region.

What Greenwald neglects to mention (possibly because he doesn’t know) is that the FBI had good reasons to look at Wallace, and to suspect that he was operating either as a witting or un-witting Soviet agent. That he was a classic dupe, however, is no longer arguable, and almost everyone (outside of the conspiratorial fringe of which Greenwald is a part) now knows this.

Greenwald’s claim that Wallace was investigated merely for his dissident political views, however, is very silly indeed. Greenwald does not tell his readers, for example, that Wallace was so enamored of the Soviet Union that in May 1944 he traveled to 22 cities in Soviet Siberia. There, the NKVD played Wallace for a fool. He credulously described the slave labor colony of Magadan, which the Soviet secret police had transformed into a Potemkin village staffed by actors and NKVD personnel, as a “combination TVA and Hudson’s Bay Company.”

Nor does Greenwald disclose that, according to Wallace’s own testimony, had he become president, he would have made Harry Dexter White his secretary of the Treasury and given a position in government to Laurence Duggan. Both men were Soviet agents. As a KGB cable found in the Venona archives shows, the Soviets hoped that Duggan would aid them “by using his friendship” with Wallace for “extracting … interesting information.”

Greenwald makes a big deal of Truman’s firing of Wallace after the latter gave a speech in September 1946 at Madison Square Garden completely at variance with Truman’s tough new Soviet policy. But such a policy had become necessary. As the historian Wilson D. Miscamble demonstrated in From Roosevelt to Truman: Potsdam, Hiroshima and the Cold War, Truman changed US policy only after Stalin made it clear that his grip on Eastern Europe was non-negotiable. Historian Fraser J. Harbutt of Emory University concurred, writing: “Truman genuinely tried to follow Roosevelt’s seemingly conciliatory line toward a Soviet Union whose policies, in the end, left him little alternative but a turn to resistance and thus to the Cold War.”

Wallace had to be fired; he gave his speech while negotiations with the Soviets were taking place in Paris, where Secretary of State James F. Byrnes correctly argued that he could not negotiate peace treaties with the Russians because they suddenly believed Wallace had enunciated a new policy on Truman’s behalf. Wallace had told the press that he discussed his entire speech with the President, and that Truman had told him that “it represented the policy of my administration.” Truman replied that he had told Wallace he had a right to make a speech, but that it was not “a statement of the foreign policy of this country.” Wallace, Secretary Byrnes said, threatened the entire bi-partisan foreign policy of the United States, which had taken 15 months to build. “Wallace destroyed it in a day.”

In his private diary, Truman wrote that, “knowingly or not,” Wallace would “lend himself to the more sinister ends of the Reds and those who served him.” He wanted to “disband our armed forces, give Russia our atomic secrets and trust a bunch of adventurers in the Kremlin Politburo.” He and his buddies, Truman added, were nothing but “a sabotage front for Uncle Joe Stalin.” Left-wing critics have ridiculed Truman’s language, but the President was essentially correct.

Truman, in fact, did not know the extent of the danger Wallace posed to his emerging foreign policy. The truth stands against the claims made by Greenwald, who seems to believe that Wallace frequently ended up on the same side as the Kremlin only because he wanted peace, and “less belligerent and more cooperative relations with Russia.” It was Wallace’s views on peace with Russia, Greenwald writes,  “that made his patriotism suspect in the eyes of Hoover and his agents.”

It appears that Greenwald does not know what intercepted Soviet messages and records—most famously the Venona coded intercepts, and the KGB archive papers brought to the West by KGB official Alexander Vassiliev as the Soviet Union crumbled—make clear. After Truman fired him, Wallace openly tried to stop the White House from blocking Stalin’s expansionist policies in Eastern Europe. Wallace opposed the creation of NATO, advocated abandoning Berlin at the time of the Soviet blockade in 1948, denounced the Marshall Plan as “the martial plan,” and justified the 1948 Communist coup in Czechoslovakia as a measure needed to thwart a fascist takeover. Stalin made the arguments; Wallace simply repeated them.

And in October 1945, while he was still in the President’s cabinet, Wallace met covertly in Washington with Anatoly Gorsky, the station chief of the NKGB (a forerunner of the KGB). KGB files record that Wallace told Gorsky that he wanted the atomic-bomb secret shared with the Soviets, that Truman was being influenced by an “anti-Soviet group” that wanted the Anglo-Saxon bloc to be dominant, and that the Soviets could help Wallace’s “smaller group significantly.” Wallace actually sought the Soviet Union’s help, via a request to the rezidentura of the KGB in its D.C. office, in the fight he was conducting within the U.S. Government against his own President’s foreign policy! This is more than being indiscreet. It is proof that Wallace was, as the FBI feared, a willing tool of Moscow. Naturally, Greenwald doesn’t mention any of this.

It should come as no surprise to find that the Madison Square Garden speech Greenwald treats as the high point of noble peacenik opposition to the new Cold War, was actually written by an American Communist. Previously appointed an Assistant Secretary in the Commerce Department by Wallace when he was Secretary, Harry Magdoff became his main speechwriter. He was also, KGB documents revealed decades later, a secret agent of the KGB.

Wallace did not even realize that his run for president as a candidate for the new Progressive Party, was on the ticket of a movement and party put together entirely by the American Communist Party. Its members controlled the new party, which was created after Stalin informed the Party leaders that he was taking a new turn, and that the old wartime Popular Front alliance of liberals and Communists had to come to an end.  All of the PP’s leaders were secret members of the new party, including Wallace’s friend, chief adviser, and campaign manager C. B. “Beanie” Baldwin. Even the left-wing journalist I. F. Stone understood this. He wrote, “The Communists have been the dominant influence in the Progressive party. … If it had not been for the Communists, there would have been no Progressive party.” Indeed, the PP’s chief counsel was another secret Communist, John Abt. When Wallace asked Baldwin about Abt, not suspecting that Baldwin himself was a Communist, Baldwin simply lied and told Wallace that Abt “was not a Communist.” What the Communists wanted first and foremost was for the U.S. to adopt a pro-Soviet foreign policy—ideally, one that would allow Stalin free rein to take over not just Eastern Europe, but France and Italy as well.

Had Wallace become President of the United States, it would have been the equivalent of Stalin directly taking over the highest levels of the American government. Greenwald argues that “many of the same people who accuse Trump of being a Kremlin pawn still accuse Wallace of being the same thing, often for the same reasons.” They do so for good reasons.

To compare Wallace to Trump, however, is an insult to Wallace. Wallace did believe that the Soviet Union could be a good partner of the U.S., and in that naïve ambition, supported Stalin’s foreign policy. But, by 1952, Wallace finally wrote a major article in which he announced that he had been totally wrong and that he had since learned Stalin’s true intentions. Trump has given no indication of why he is so pro-Putin, which is probably why so many people believe that Putin must be holding something over him. This belief may turn out to be wrong, but given the available facts, it is hardly unreasonable. In any event, given the behavior of Henry A. Wallace in the 1940s and of President Trump today, it is not surprising that the Bureau felt an investigation in both instances to be prudent and necessary.

Ronald Radosh is Prof. Emeritus of History at CUNY, an opinion columnist at the Daily Beast, and co-author of, among many other books, A Safe Haven: Harry S. Truman and the Founding of Israel. You can follow him on Twitter @RonRadosh