Back in August, Jacobin journalist Meagan Day declared that “democratic socialists want to end capitalism.” The subtitle of her article in Vox explaining the movement explicitly stated: “It’s not just New Deal liberalism.” There is some disagreement about this on the Left. Kyle Kulinski, an independent media commentator and co-founder of the Justice Democrats, supports democratic socialist candidates such as Alexandria Ocasio-Cortez. The Justice Democrats endorse a myriad of candidates who do not take large donor capital, many of them sharing endorsement with the DSA. Nevertheless, Kulinski rejects the “post-capitalist” approach to democratic socialism, and holds that “so many people now describe themselves as ‘democratic socialists’ and they do not support a post-capitalist philosophy.

In the clip above, Kulinski argues that there is a fundamental confusion of labels—politicians whose policies are entirely in line with Nordic social democracy are defining themselves as democratic socialists. He places the blame for this confusion on Bernie Sanders, who, despite a career of never praising actual socialism, has been lumped in with Venezuela and a post-capitalist ideology. If Bernie had labelled himself correctly, Kulinski maintains, the current confusion over democratic socialism and social democracy would not exist.

DSA co-chair Joseph Schwartz was quoted in a 2015 PolitiFact article litigating the difference between democratic socialism and the Nordic model: “When Bernie is asked, ‘Are you a socialist?’ he doesn’t deny it, and he immediately talks about Scandinavia. He uses [democratic socialism and social democracy] interchangeably. But if you look at his history, he knows the distinction.” A Quillette article published in March and entitled “The Falsity of the Sanders Venezuela Meme,” also observes that Sanders, uniquely among left intellectuals, has never expressed support for the Venezuelan model of politics: “There is no record of Sanders sponsoring or co-sponsoring any symbolic motion which praises the ‘achievements’ or policies of Hugo Chavez,” as well as a quote from Sanders during the Presidential primary, emblematic of his career: “When I talk about democratic socialism, I’m not looking at Venezuela. I’m not looking at Cuba. I’m looking at countries like Denmark and Sweden.”

A skeptic or cynic might argue that Sanders is simply being dishonest—he knows that he opposes capitalism in principle, and is pretending to look to Sweden and Denmark when in fact he prefers Venezuela. Yet, such a case would have to be made based on some five decades Sanders has spent in public life. If every time he is asked to expound on democratic socialism, he refers to the Nordic nations, then that may be what he actually believes. Moreover, if Sanders’s intention has been to conceal his beliefs, then why would he call himself a “socialist” to begin with?

When Sanders speaks of “democratic socialism,” it is far more likely that he is thinking of “social democracy.” The Merriam-Webster dictionary’s definition of “democratic socialism” links directly to social democracy. The rather large difference between Venezuela and Sweden is bridged by the same definition according to Merriam-Webster, and Sanders, the spearhead of a movement, has made the same mistake.

The function of the label “democratic socialist” is being changed through usage. Take, for example, the political label “liberal.” This can refer either to a centrist brand of classical liberalism or a left-of-center politics in general. The former definition has only resurged in the past few years. The term “libertarian” is used by both the Left and the Right for different ends—in Europe it does not have the free market trappings it does in the United States. If “liberal” and “libertarian” do not have stable meanings, then why should we expect “socialism” to refer definitively to collective ownership of the means of production?

Many so-called socialists support Nordic social democratic policies, and are not Marxists who yearn for the end of capitalism. Medicare for All, as a shorthand, has been characterized by the Right as “socialized medicine.” But this is deceptive—state-owned hospitals such as the UK’s National Health Service may be the goal of the more radical democratic socialists. Others who have adopted the label, however, such as Kulinski and the Justice Democrats, only see the government as a single payer for all medical transactions. The state would not directly employ doctors or run hospitals. 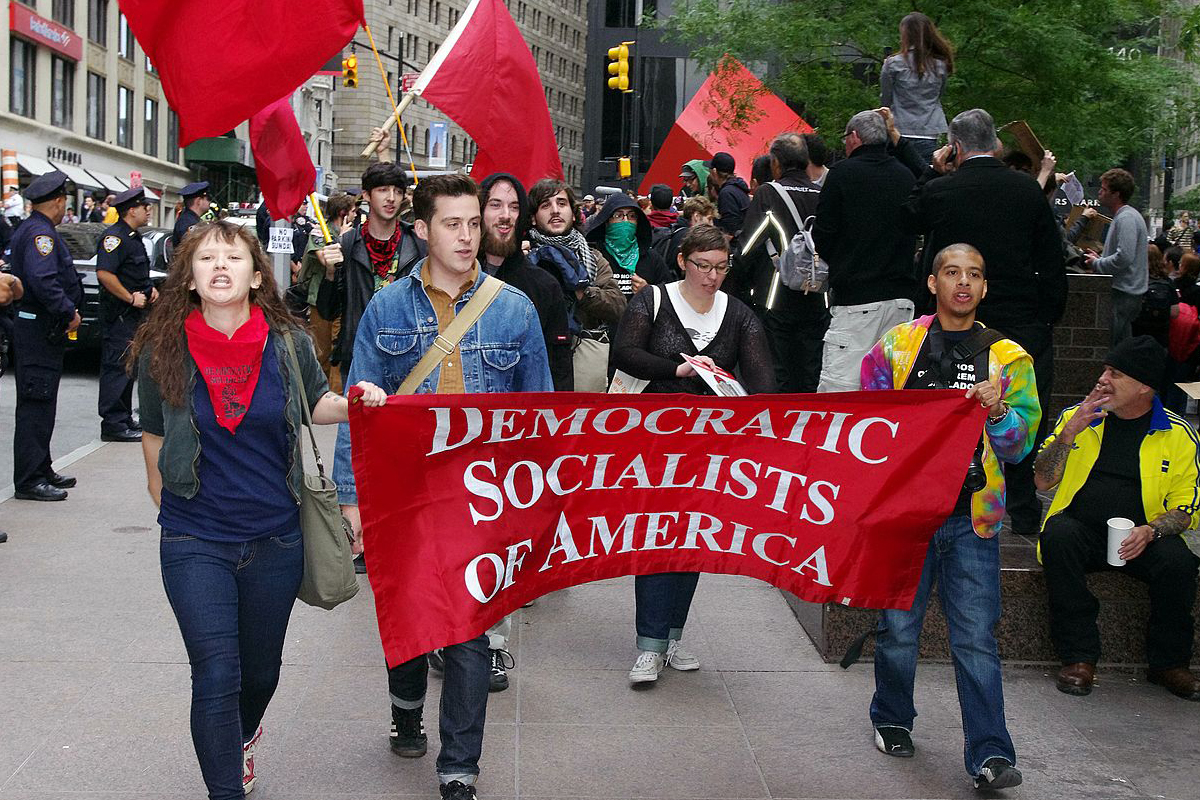 This confusion over terminology has become a longstanding trend on the Left. I spoke to socialist writer Chris Hedges recently, and over the span of our conversation, Hedges spoke about “revolution” and evoked Marxist arguments about the inevitable collapse of capitalism’s productive capacity. Yet, when I asked him about his ideal future, he did not mention the end of capitalism, but “a highly regulated capitalism, such as the Scandinavian countries in the 1970s and 80s.” Self-described socialists continually express support for social democracy, not commune societies.

In an August article for Quillette entitled “Democratic Socialism is a Scam,” Giancarlo Sopo hashes out an understanding of when the Left goes too far—New Deal-style social democracy is wholly acceptable, but democratic socialism is nonsense. Sopo says he “presented a team of Norwegian economists with a summary written by Vox of DSA’s economic ideas, eleven out of the 12 indicated the views would fall on the ‘far-Left/fringe’ end of Norway’s political spectrum.” Sopo is right—these are poorly thought-out ideas, overreaching rhetorical flame more than actionable policy. The DSA platform includes the “abolition of capitalism” and the end of “hierarchical systems.”

But nowhere in Alexandria Ocasio-Cortez’s or Bernie Sanders’s platforms do you find such rhetoric. Instead, they support a number of policies for reform within the capitalist system. They are more ambitious than your typical Democrats, who may defend Obamacare but resist Medicare for All, but these democratic socialist candidates do not oppose capitalism in any form but empty rhetoric. The real value of these politicians is in the distance between Medicare for All and Obamacare—ordinary Democrats have only begun to support Medicare for All through pressure from this ostensibly socialist Left. The role of democratic socialists in politics, as Keynesians who do not take corporate money, is to push for universal social programs on which mainstream Democrats have repeatedly compromised.

A critic might say that the mere touch of socialism, in any definition, makes these candidates toxic. There may be multiple factions using the definition of socialism, but the label of “democratic socialism” itself should make us wary of supporting these politicians. But if Sanders and Ocasio-Cortez understand “democratic socialism” to be “social democracy,” then they are not aiming toward Venezuela. Asking them to turn their concern to this problem of definition, after the fact, ignores the reality of electoral politics—these candidates must defend their policies, not litigate the definition of socialism. They are stuck with the label, but we might look to see what they really mean by it.

Socialists have held political power in the United States before, largely before the Cold War, including a socialist mayor of Milwaukee who did not bankrupt and collectivize his city in his 24-year incumbency. Instead, he built new infrastructure and defended workers in the form of minimum wage laws and an eight-hour workday. Nathan Robinson points out that mayors like this were known as “sewer socialists,” because of their emphasis on public works programs and local spending. Over 130 socialist mayors in early twentieth century America boasted an empirical record of success in governing as social democrats despite being nominally anti-capitalist.

Today, instead of the “sewer socialists” fighting for increased infrastructure spending, we see news like Scranton’s public sewer authority being sold off to a private water company. In his last years, Martin Luther King told his staffers that “America must move toward a democratic socialism.” King, who was no Marxist, was most likely referring to a society of redistribution, a politics akin to the New Deal, including major investment in America’s healthcare, roads, cities and yes, even its sewer systems. Rather than focusing on the zombie fear of resurgent communism, we should look to the rich history of socialism in the United States to contextualize a new wave of democratic socialist candidates.

Alexander Blum’s writing focuses on politics, mysticism, and fiction. You can visit his website here.