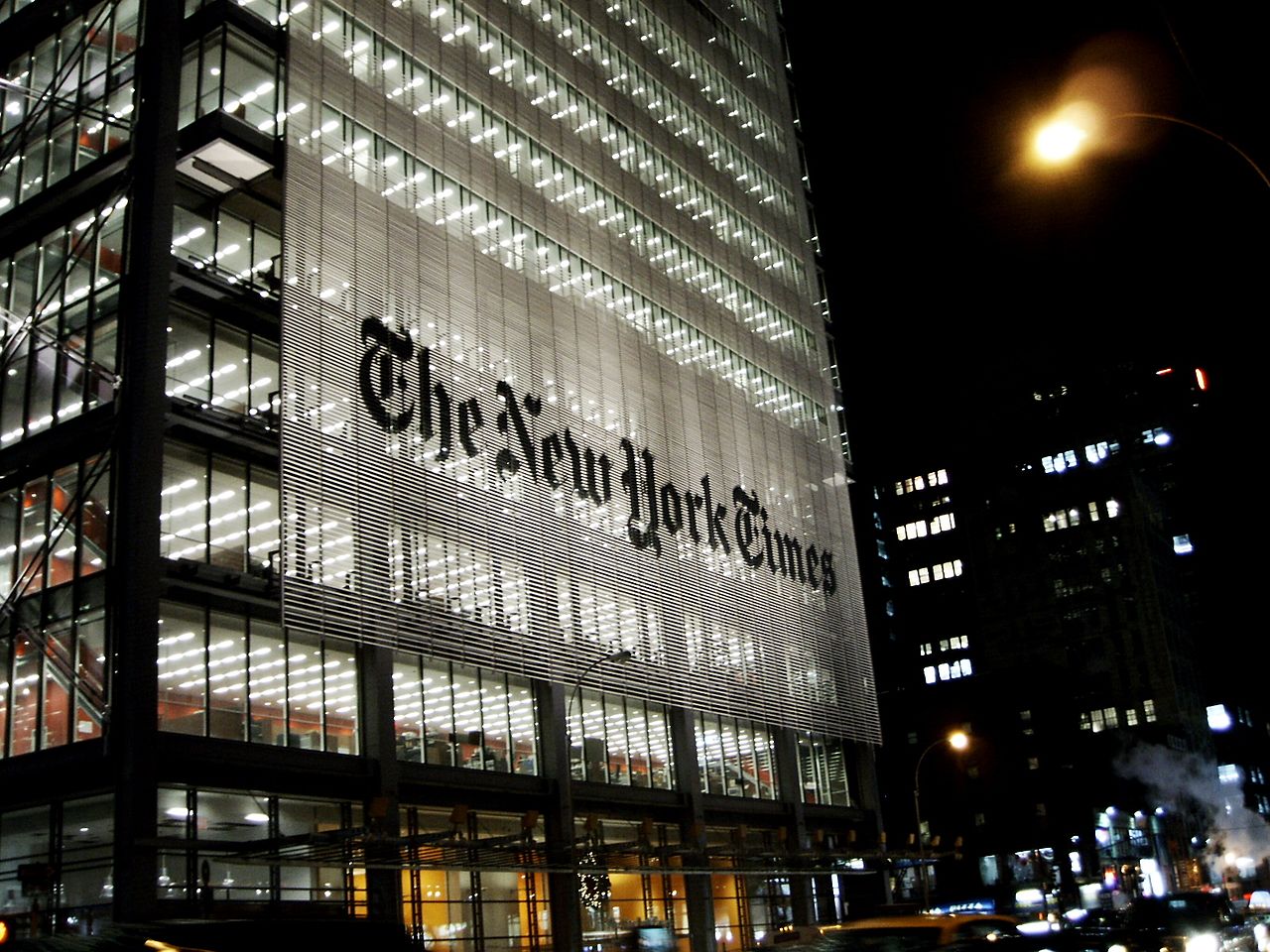 If you find yourself in a room full of politically minded people and want to get everyone shouting quickly, start talking about the state of prestige-media opinion writing. Progressives and conservatives are both sure that their team is being systematically excluded from the op-ed pages of gatekeeper institutions like the New York Times, the Washington Post, and the Atlantic. Each side thinks the other is grossly over-represented. They can’t both be right—so who is?

Lately, a new argument has emerged from the progressive side of this debate: if these publications want political diversity, they should get it by hiring opinion writers from the far-Left, not the Right.

The far-Left’s story goes like this: after the Trump election, men like New York Times opinion editor James Bennet and Atlantic editor-in-chief Jeffrey Goldberg concluded that coastal media elites lived in an echo-chamber that blinded them to the views of many Americans. Seeking to correct this, they hired conservative opinion writers like Bret Stephens and Kevin Williamson—despite the fact that these Never Trumpers don’t actually represent the views of most conservatives. Meanwhile, the increasing influence of radical voices on the Left, buoyed by the Bernie Sanders candidacy, has been ignored. The New York Times employs multiple Never Trump conservatives, but not a single socialist.

Bennet and Goldberg are trying to avoid political homogeneity—but perhaps they should get it by turning their publications into a debate between the center-Left and the far-Left, instead of elevating idiosyncratic conservatives with no real constituency. That’s what Ta-Nehisi Coates argued in a remarkable closed-door exchange with Goldberg that was later leaked to the press:

Goldberg: Do you think The Atlantic would be diminished if we narrowed the bounds of acceptability in ideological discourse, even as we grow in diversity?

Coates: Again, I don’t think it’s a question of narrowing. I think it’s where the lines are drawn.

Goldberg: Well, it is if you bring the lines in.

Coates: Well, no, you open it up. You understand what I’m saying? Like, as I said before, I don’t think 15 years ago or 20 years ago we would have ran “The Case For Reparations.” So that means it’s opened up in a different direction.

Eric Levitz ran with this argument in a recent column in New York magazine called “The Media Can Be Ideologically Diverse Without Conservatives.” He writes:

The far-Left has ideas that can be argued civilly, in good faith, without violating core liberal values. And those ideas are more responsive to the problems of our era than those of the NeverTrumpers. What’s more, by at least by one criterion, they’re actually more “mainstream”: While only 5 percent of American voters are anti-Trump Republicans, 6 percent are self-identified socialists.

How would giving a more prominent platform to the far-Left change the terms of civic debate? According to Levitz, it would allow us to debate questions like: should the Constitution be burned? Is it immoral to be rich? Should prisons be abolished? Is the Supreme Court a legitimate institution? Should we nationalize banking? Should we replace global free trade with (horseshoe theory alert!) “nationalist protectionism”? Should we abolish intellectual property? Should the means of production be socialized?

These are better questions, according to Levitz, because liberals are currently being forced to debate conservatives whose ideas have been “empirically disproven”:

The scarcity of worthwhile conservative writers reflects the movement’s intellectual paralysis. Conservatives who were willing to abandon their movement’s dogmas once the Reagan-era verities turned stale have ceased to be recognizable as conservatives. The others have clung to ideas too discredited to “challenge” liberal readers: The notions that tax cuts spur growth; high deficits produce runaway inflation; inequality is the necessary and worthwhile price of economic dynamism; and social-welfare programs inevitably breed dependence (and thus, hurt the poor more than they help them) are all empirical claims that have proven demonstrably false.

Putting these threads together, we have the two pillars that undergird the far-Left argument: far-Left ideas have more purchase among the American people than the ideas of the Never Trump conservatives that populate the opinion page, and they are empirically sounder.

Being able to entertain these two claims depends on doing some sleight-of-hand with our political categories. If we class the conservatives who write for prestige publications as “Never Trump conservatives,” their views look wildly overrepresented relative to the general population—only 5 percent of the American electorate would describe themselves that way. Of course, if we described these columnists simply as “conservatives,” we reach the opposite conclusion. 36 percent of American voters describe themselves as conservatives, but only 18 percent of the opinion writers at the New York Times, Washington Post, and the Atlantic are non-progressives.

If I were on a mission to make Bret Stephens’s views look maximally overrepresented, instead of classing him as a “conservative,” I’d class him as a foreign policy hawk who is mildly skeptical of climate science and believes the 2nd Amendment should be repealed. I could create a category for Bret Stephens so narrow that Bret Stephens is the category’s only member. Such a category would make up a mere three hundred millionth of the American electorate, but a full 8 percent of New York Times opinion columnists. Surprise—I’ve found that ‘Bret Stephens conservatives’ are extremely overrepresented among prestige media opinion columnists.

This trick winds up being crucial to Levitz’s argument, because it’s the only way you can swallow what comes next: radical Left ideas are more popular than moderate conservative ones. If 6 percent of American voters identify as socialists, but only 5 percent as Never Trump conservatives, you might very well conclude that there’s more demand for columns about burning the Constitution than reigning in fiscal deficits.

It’s undeniable that in the wake of the Sanders candidacy, socialism is having a moment. Someone who self-identified as a democratic socialist almost captured the nomination of the Democratic Party—until recently, an unthinkable development. But ‘socialism’ is a funny term—it gets deployed in public life to mean anything from Scandinavian welfare capitalism to the dictatorship of the proletariat. And Sanders stood for something closer to the former than the latter—which means that we can make very few conclusions about how many American voters are interested in the debate about destroying the foundations of American society that Levitz wants to have.

Indeed, my guess is that burning the Constitution, abolishing prisons, and converting the means of production to communal ownership would poll poorly with the American public. We can’t say for sure, because these ideas are too radical for anyone to have bothered asking the public what they think about them. But there is exactly one constituency in America for whom these ideas are mainstream: highly educated far-Left activists. In the grad school dorms, book launch parties, and sustainable coffee shops of America’s most prosperous cities, scrapping the Constitution may be a perfectly ordinary thing to debate. But nowhere else.

This is Levtiz’s central flaw. He wants to purge the op-ed page of views held by a politically marginalized minority and replace them with the views of an even more politically marginalized minority. He justifies this preference by casting the center-Right platform as unpopular and empirically shaky, even though the very same is true for the radical Left. So why would we necessarily prefer one over the other?

Levitz tries to answer that question by deploying the language of empirical objectivity and claiming that center-Right ideas are discredited in a way that far-Left ideas are not. But this is laughable on its face. Trade protectionism is one of the ideas that Levitz thinks is “more responsive to the problems of our era” than the “demonstrably false” center-Right approach. But in a survey of economists, a full 100 percent said that trade protectionism doesn’t work. Other ideas, like economic nationalization and abolishing intellectual property, do have support among a minority of academics—but so do conservative ideas. A full 40 percent of American economists are politically conservative. Levitz needs to pretend that the ideas of those economists are “disproven” because he otherwise has no warrant for why the ideas of one group should be systematically preferred over another.

What Levitz does have is something we all share: a desire to see our team win. When he declares that free trade and fiscal restraint are on the ash heap of history, so it’s time to have a debate about socializing the means of production, he’s doing something deeply human: interpreting the world in a way that casts my preferences as obviously good and your preferences as obviously wrong. This happens especially often because it’s lately become strategically important to cast yourself as the victim if you want people to listen to you. Levitz and others need to present themselves as unfairly marginalized, chalking up the radical Left’s lack of representation to structural discrimination instead of unsatisfactory performance in the marketplace of ideas.

But that marketplace always benefits from a diversity of smart arguments, and that’s why, despite all of the above, the New York Times should in fact hire a radical for its opinion page. It’s ultimately not so important if radical leftism isn’t popular outside of a sociologically distinct minority—because the benefits of viewpoint diversity come from checking our biases, not from making different constituencies feel included. The airing of radical ideas sharpens everyone, because a centrism forced to rebut them will become a better, smarter centrism. And if we want to find a way out of the tribal mess we’re trapped in, that’s exactly what we need to build.

Levitz and others think that moderate conservatives don’t deserve their op-ed platform in part because few voters today back those ideas—but that same argument would of course apply to radicalism. Instead, we should welcome smart, well-reasoned, good faith arguments regardless of their popularity. And that means that Bret Stephens will have a seat at the table alongside Eric Levitz.

Nicholas Phillips is a research associate at Heterodox Academy and a law student at the NYU School of Law. Follow him on Twitter at @czar_nicholas_