“Which side are you on, friends? Which side are you on?” This question was robotically intoned by a dozen or so students led by a young woman in a ‘Stay Woke’ jacket. As she paced back and forth before a stunned audience at Lewis & Clark Law School in Portland, Oregon on March 5, they chanted slogans and their dreary rendition of the 1930s union folk song. By their own account, the students were there to oppose fascism, which that week was represented by the American Enterprise Institute’s resident scholar, Christina Hoff Sommers. Prevented from delivering her remarks for the duration of the interruption, Sommers patiently waited for them to finish. The spectacle was meant to disrupt, but it was also a challenge and an ultimatum: “Which side are you on?” the students demanded of their assembled colleagues.

I am the freelance journalist who recorded and released the viral video of what happened that day. For doing so, I now find myself accused of being on the ‘wrong side’ — not just by the protesters, but also by some in the media. The Guardian has accused me of belonging to “a movement” that works “hand in hand with right-wing media and right-wing organizations to promote attacks on progressives.” This was followed by an article in GQ which includes me on a would-be shaming list of “free speech grifters.”

Lot of people are pushing back on the campus free speech "crisis" narrative. Since this has been my main beat for close to 5 years, I have some thoughts, and some evidence that there's at least some kind of problem. (1) https://t.co/IwFrFNc5iL

A number of pundits and columnists have quarreled with the idea that our campuses are becoming less tolerant, and there is certainly room for reasonable disagreement on this topic. What is dismaying about the Guardian and GQ articles is the recourse to personal insults and an unwillingness to distinguish between different critics of campus illiberalism. Instead, thoughtful progressives like Bret Weinstein and his wife Heather Heying are lumped into the same category as a right-wing provocateur like Milo Yiannopoulos, and all are accused of operating from mercenary motives.

Three days after the protest against Ms. Sommers at Lewis & Clark Law School, I received an email from Jason Wilson at The Guardian. He asked if I was responsible for her Portland-area visit. “You’ve received national attention now,” he went on. “Was that part of the plan?” Wilson pointed to my involvement with the student group that invited James Damore to speak at Portland State in February, but he also misattributed responsibility for other controversial events to me. Ms. Sommers was invited to speak at Lewis & Clark and Willamette University by The Federalist Society. She also spoke at Portland State on a panel organized by the campus chapters of Turning Point USA and College Republicans. I am not a member of any of these groups.

The evident bias in his questions made me uneasy. When I googled his name, I found an article by Nathan J. Robinson, editor of the left-of-centre Current Affairs, that accused Mr. Wilson of misleading and sensationalist reporting on Charlottesville. Nevertheless, I answered Mr. Wilson’s questions frankly and courteously. A week later, his story appeared, describing me in the following way:

The widely circulated video that underpinned all coverage was captured and tweeted out by a Portland State University graduate student in politics, Andy Ngo. Ngo describes himself as a journalist, and his work has appeared almost exclusively in hyper-partisan conservative outlets like The College Fix. There was no media accreditation, but Ngo captured cellphone video, and this became the unchallenged record of the event.

Ngo is no stranger to controversy, and it wasn’t his first viral video. Over the last year, the student has shrewdly inserted several into the workings of the right-wing outrage machine.

“Shrewdly”? Mr. Wilson cites two videos I recorded in support of his claim that I am a right-wing provocateur. The first is a clip from a public interfaith panel, during which a Muslim speaker freely expresses his view that the correct Islamic punishment for unbelief is banishment or death. The second is a video of a protester damaging the sound system during the Damore event last month. Mr. Wilson’s uncharitable mischaracterization of my reporting and motives reminds me of the justification offered by my former editors at Portland State’s student paper, The Vanguard when they fired me from my editorial position last April. Recording and sharing a video that exposed Islamic apostasy doctrines to scrutiny, one of my supervisors explained, violated the principles of media ‘intersectionality.’

[Grifters] lure unsuspecting people into accepting fiction in order to steal their money. If you call someone a ‘grifter,’ you are also leveling an accusation against those that find the accused person reasonable. It stands in for a counterargument and is, by its nature, hard to disarm.

The University of Toronto psychology professor, Jordan Peterson, rejects Uyehara’s accusation that he only focuses on the Left as a “conservative provocateur.” “I’ve made no secret of my distaste for the identity politics of the Right,” he told me. “[It is] both ignorant of historical reality and morally despicable.”

Ms. Uyehara is better at tossing casual ad hominems at her political opponents than she is at getting her facts right. For example, she opens her essay by quoting a three-year-old interview with comedian Bill Burr, in which he dismisses the idea that political correctness is challenging free speech. However, she ignores his long record of making fun of outrage culture, and the more pertinent remarks he made just a couple of months ago: “So many people agree on so many things right now [but] they are so afraid to talk because you don’t want to get in trouble.”

Of course, both Ms. Uyehara and Mr. Wilson imply that speaking up should land a person in trouble which is why they are demanding a reputational cost from those who do so. Ms. Uyehara even criticizes me for soliciting donations after documenting the protest at Lewis & Clark. Are we to understand that she does her writing for free? Describing free speech advocates as con artists if they try to earn a living from their work only increases their vulnerability to mob resentment and functions as a warning to others: put the camera down and shut up or face the same treatment. 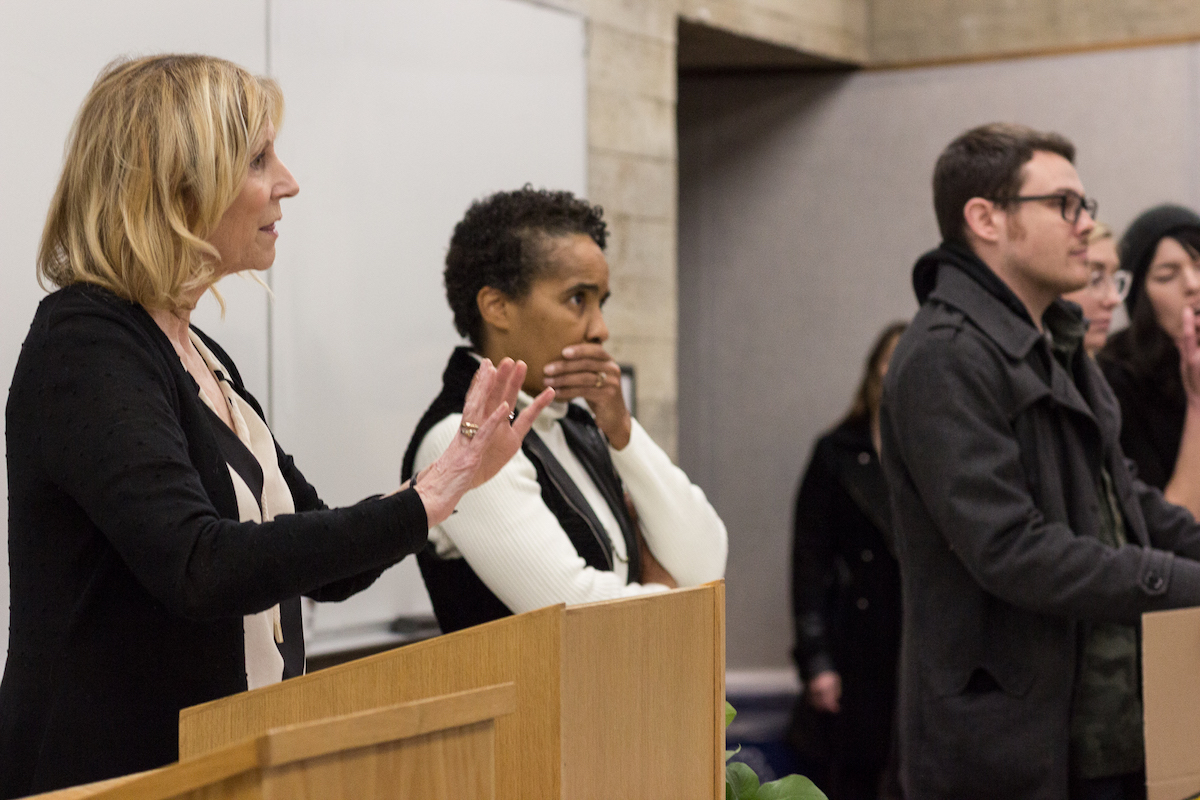 Ms. Uyehara’s willingness to misrepresent her opponents even leads her to infer mendacity from something as innocuous as a smile: “It was a Ben Shapiro wet dream. As the ringleader yelled, ‘Black lives matter,’ Sommers turned to the camera euphorically grinning from ear to ear. Here it was: the money shot.” I was in the room and a lot of students were smiling, not least because the protest was completely ludicrous. “I was embarrassed for the protesters,” Sommers told me. “The whole thing was like a South Park parody of campus demonstrators.”

Citing a post by Heterodox Academy’s research director, Sean Stevens, Uyehara says they found “that the majority of successful disinvites came from the right, not the left.” But this is misleading without context. Sean Stevens states in his post that:

And finally, almost all of the disruptions of events held at universities have been found to come from the Left. A table published by the Heterodox Academy highlights this clear trend:

I’m proud of the work that I’ve done as a student writer. Inter alia, I’ve exposed the bankrupt ideology behind a white nationalist group attempting to recruit on my campus, I’ve given voice to closeted atheist Saudi Arabian students, and I’ve written about a brave Muslim mother who stood by her gay son even as she was ostracized by her faith community. To be reduced to a mercenary “conservative activist” in GQ and a “hyper-partisan” hack by The Guardian, is disappointing. But in the current polarised and highly tribal environment, that, apparently, is the price demanded of those suspected of belonging to the wrong side.

Andy Ngo is a graduate student in political science at Portland State University. Follow him on Twitter @MrAndyNgo.