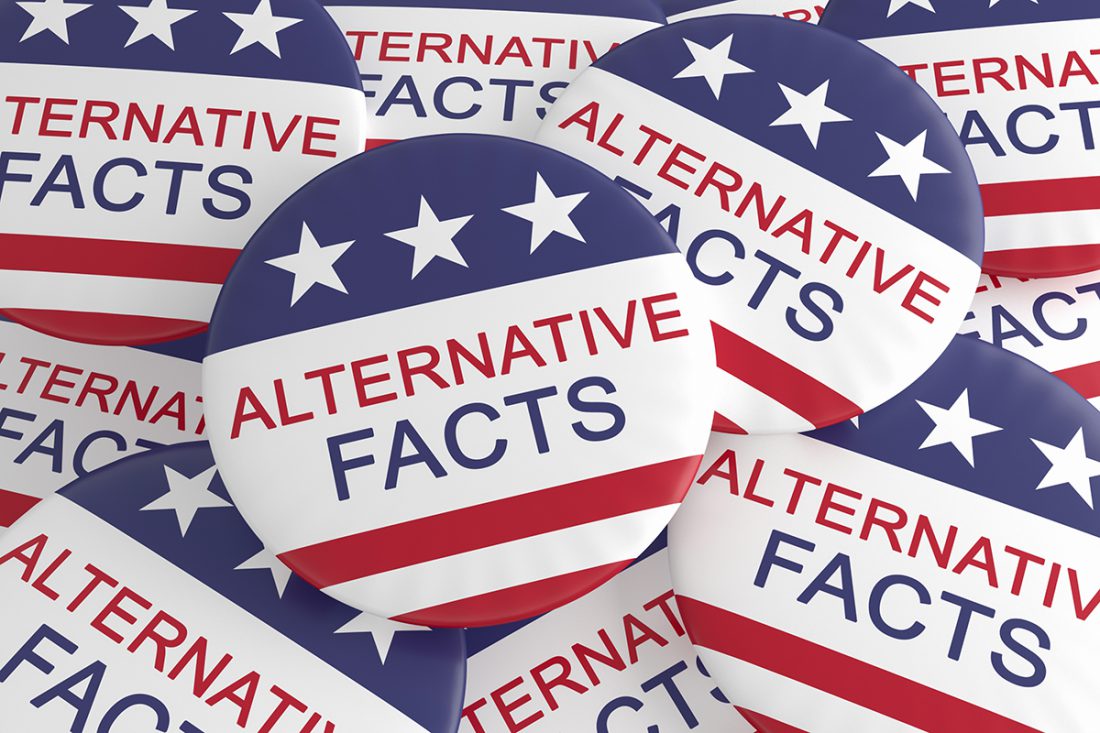 The president’s habitual butchering of language is by now well documented, and the effects of his linguistic ineptitude, willful or unintentional, are corrosive. It would not be unfair to suggest that he shoulders a sizable share of the blame for the gradual dissolution of the quality of discourse in the public sphere. But in this vice he can find a partner just as guilty.

Digital news platforms and the social media feeds that help them thrive have become increasingly bold in the strategies they employ to capture viewers’ interest. This has, however, resulted in a sustained assault on the integrity of language. A strikingly careless habit to fall into on the part of those who participate in the mass distribution of information, its consequences are severe. Chief among them is how the use of words at inappropriate times diminishes their meaning – an abuse so significant that its contributions to the unhealthy, noise-riddled online milieu that we experience each day must not be ignored.

To truly grasp the wicked nature of this practice, we must first understand the harm that the internet can inflict on a person’s ability to simply read and reason.

In his 2010 book The Shallows: What the Internet Is Doing to Our Brains, writer Nicholas G. Carr offers a bleak yet unerring depiction. “When we go online, we enter an environment that promotes cursory reading, hurried and distracted thinking, and superficial learning,” he writes. “It’s possible to think deeply while surfing the Net, just as it’s possible to think shallowly while reading a book, but that’s not the type of thinking the technology encourages and rewards.”

One would hope that the virtually endless digital archive at our fingertips — the millions of books, essays, lectures, stories, documents and other forms of information and inspiration — would command one’s attention. After all, never before has convenience given so much and expected so little in return.

In a better world, though, this gift and the technical framework from which it derives, would not be accompanied by as daunting an obstacle as we face today: the layers of sheer nonsense spread throughout. Piled onto the easily exploitable environment that Carr describes are mounds of headache-inducing, formulaic mediocrity written by those who ought to know better but, for one or several reasons, cannot resist.

I’m talking, of course, primarily about the sensationalized headlines deployed out onto the internet to win the battle for clicks in the name of profitability. Little care is shown towards whether the words chosen are the right ones to describe what is advertised. Too often they promote skewed narratives that cheat the reader and shame the writer.

In ‘Hilarious,’ comedian Louis C.K. offered the title of his 2010 album as a prime example of what he called a “top shelf” word: one used, mistakenly, during conversations about mundane things like a bucket of chicken wings. ‘Amazing’ and ‘genius,’ he said, could also be found in the lazy person’s vocabulary, leaving one at a loss when circumstances require them to be used in their truest sense.

This eight-year-old observation is no less relevant today. Just as President Trump plucks a word from his small batch of favorites that would make even Charles Ogden wince — “beautiful” could be found more than 1,500 times on his Twitter account as of last year, and he has used it to describe everything from a speaker system to the lives lost in Afghanistan — so too do writers, editors, and social media managers.

Imagine, for instance, a conversation between two policymakers on an afternoon news program in which each remains relatively calm and respectful yet nevertheless pushes back against the other’s claims. Despite the modest nature of the interaction, even the slightest bit of friction between the two can be pounced on as cause to hastily throw open the doors to those “top shelf” words.

We’ve all seen them, often in the headlines of stories or in an accompanying tweet or Facebook post: ‘Burns,’ ‘Slams,’ ‘Destroys,’ ‘Decimates,’ ‘Hammers,’ ‘Obliterates,’ ‘Torches.’ Sometimes they’re in all-caps to maximize the sensationalism. Other times they’re accompanied by several images of a yellow flame or a metal hammer, as if those war-like verbs by themselves are insufficient. If that still doesn’t inflate enough, one might even remove and replace words in favor of those images as if one has, out of frustration, abandoned the ability to convey meaning.

This increasing reliance on pictographic images one might see crudely scrawled on the walls of caves is not unlike Trump’s use of superlative verbal crutches like “very” or “believe me,” the latter of which only serves to enforce a previously stated claim which apparently he felt fell short with the words he chose. As Columbia University professor of linguistics John McWhorter put it, the quality of the president’s speech is akin to the language that “first emerged among people who didn’t have writing and were first getting their verbal sea legs.”

More parallels can be drawn. In media, don’t forget the hyperbolic, energy-infused phrases: ‘X is taking over the world,’ ‘Y lit the room on fire,’ ‘Z’s comeback had the press pool shaking.’ This formulaic, propaganda-lite jargon not only encourages the frenzied acts of reacting, clicking, and hastily skimming, but also obfuscates context with slanted issue framing, just as Trump labels news stories with which he disagrees as “fake” and resorts to saying “Many people don’t know” — or some variation of the phrase — presumably as a substitute for “I just learned.”

It is no less abhorrent that these linguistic embarrassments are often used as a marketing tool in the title of a piece rather than in the body itself. Wherever they appear, their purpose is to appeal to one of our most base instincts: to direct one’s attention towards confrontation. That aforementioned slanted issue framing generates partisan clicks. Heady declarations arouse and incite. Inflammatory, factually-dubious opinions draw engagement, which some digital information providers covet so that they may simply exist, so that they can continue this cycle, so that they can get more, more, and still more. How flimsy a measuring stick this is.

One may counter that this trend in the online news landscape merely requires the reader to become more discriminatory as one digests information. The lesson, the argument goes, is to not necessarily take things at face value. “Don’t judge the article by its title,” seems to be the internet age’s trimmed version of the adage we’ve all heard. For as long as there have been decent newspapers, “yellow journalism” has festered alongside.

But this claim would hold water only if the product at issue here was a commodity like T-shirts or jelly donuts. Were this the case, who would care if either was marketed in the most outlandish, suggestive terms imaginable? News, on the other hand, a public service worthy of trust, is set apart. Of course there are duties on the part of publishers to shareholders, but there are also moral obligations to inform and encourage healthy debate among the citizenry.

Honest journalism, New York Times columnist Bret Stephens noted in a lecture at a media awards dinner in Sydney, Australia, last fall, “requires proprietors and publishers who understand that their role ought not to be to push a party line, or be a slave to Google hits and Facebook ads, or provide a titillating kind of news entertainment, or help out a president or prime minister who they favor or who’s in trouble.”

Thankfully, some news organizations and digital publishers — including this one — agree, and for good reason: When conflict – the source of most news – is manufactured, either slightly or egregiously, truth becomes a casualty. No amount of rationalization can justify that.

The responsibility to change course falls on several groups, one of which is social media companies. Facebook recently took a step in the right direction when it announced a tweak in its newsfeed algorithm that would highlight content with which users can “meaningfully” interact, as CEO Mark Zuckerberg described it. Digital publishers have largely cringed at this move, and several have made layoffs presumably to offset dips in traffic suffered as a result of the change. But this is ultimately good. Who could have earnestly felt that sites whose mantra shortsightedly glorified views and so-called “hate clicks” over insightful, well-written, and intellectually honest content would develop a sustainable audience that would enable growth?

It follows that publishing decision-makers must do some soul-searching, especially those who have unreservedly embraced the “pivot to video.” Mic, MTV News, Vox, Vice Sports and Fox Sports are among those whose move away from writers and towards video has coincided with a decrease in views, according to multiple measurement firms. (Last summer, the last in that list removed all columns and articles from its homepage entirely; even the link www.FoxSports.com/writers redirects to the all-video homepage.) In a September 2017 essay in Columbia Journalism Review titled “The secret cost of pivoting to video,” Wall Street Journal and Guardian U.S. veteran Heidi N. Moore sums up the craze. “Hundreds of journalists,” she writes, “have lost their jobs while shiny-object-chasing publishers are no closer to creating cohesive video strategies to replace the traffic those writers were producing.”

It is also the consumers of news upon whom the responsibility to navigate information sources falls. Ideally, this should be done conservatively, with each reader asking whether a post or headline that embellishes or misleads deserves time and attention more than one that is restrained in tone yet also inviting. Thanks to aggregation, there are plenty of places to go to read more or less the same story, but it would be in our best interest to identify and ignore platforms for which half-baked narratives, reckless generalizations, and diminished trust are acceptable as long as the bottom line is green.

But most importantly, the creators of the content we are exposed to cannot deny the momentous nature of their work. It would require a certain type of unabashed ignorance on the part of the social media curators, editors, and writers — whoever participates firsthand in the degeneration of the quality of our collective online experience — to narrowly forge ahead unperturbed by consequences, negligent of decency, and lacking the foreknowledge to see how their work will be viewed when the time comes to reflect on their contributions. Sure, every few weeks your deceptively-titled 200-word article of poorly-strung-together, value-deficient factoids — punctuated by eye-catching gifs that you hope prompt those cursory readers and surface-level thinkers to leave a “like” — was the most popular webpage in the country for an hour or so, but are we any wiser because of it? Are you?

Fixing what is wrong in media requires earnest dedication from each of these groups and collaboration among them all. It demands initiative, bravery, and perhaps even personal sacrifice to see it through, but the ideals that unite these groups are admirable: a more liberal interpretation of the word “profitability,” a more informed perspective on the current state and the future of journalism through the study of its past, and, of course, a respect for the written word. In our pursuit of intelligent, democratic discourse in this age fraught with information and misinformation, these we cannot cast aside.

William Vaillancourt is a writer and editor from New Hampshire who studied history and political science at Boston University. You can follow him on Twitter @12WCV