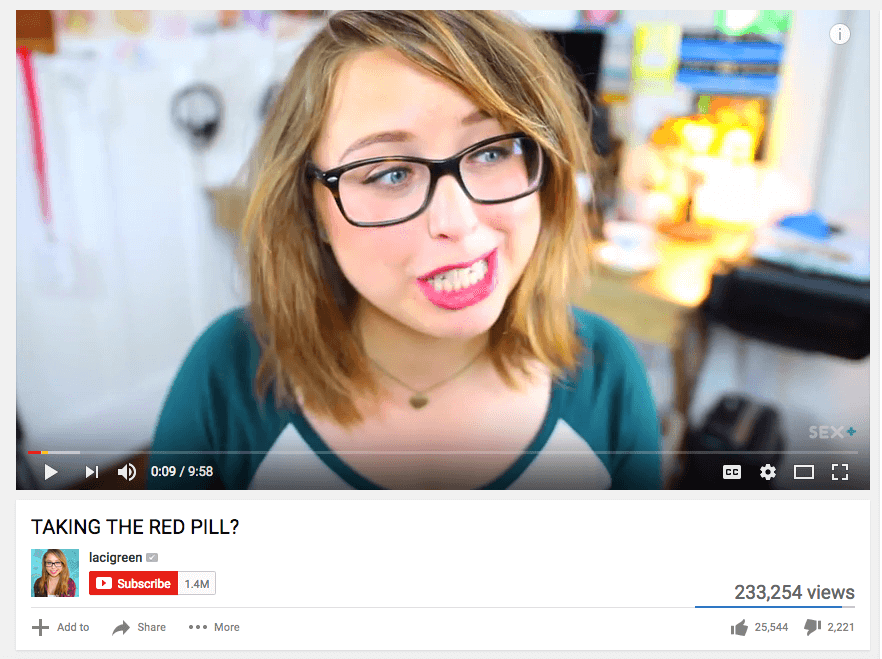 Earlier this week, popular YouTuber Laci Green, with almost 1.5 million subscribers, released a video entitled “Taking the Red Pill?” The “red pill,” obviously is an allusion to the famous 1999 film The Matrix, in which one of the lead characters, Morpheus, an infamous leader within the Matrix presents Neo, a hacker seeking to explore the Matrix, with two choices—taking the blue pill or the red pill. According to Morpheus, if Neo takes the blue pill, “you wake up in your bed and believe whatever you want to believe,” but if Neo picks the red pill, “I show you how deep the rabbit hole goes.”

Virtually everyone has seen The Matrix or has heard of the red pill meme; indeed, a Google search for red pill brings up almost 7 million results. However, what makes Green’s video particularly important and distinguishes it from the thousands, perhaps hundreds of thousands of other banal red pill videos is the context around which Green’s red pilling has occurred.

As Laci states at the very beginning of her video, her red pilling has centered on “feminism and social justice warriors.” Most significantly, and why this video deserves particular attention, is that Laci has built her enormous online following in part by being “the pinnacle of a social justice warrior, my SJWness has been memified.” Her conversion or evolution or whatever you want to call it “has apparently really confused people, there have been thousands of tweets and emails of people freaking out, like what is going on.”

I have a few more quotes from the video that I think are particularly salient and that I will discuss further down, but first I want to take a moment to clarify what this essay is about. My intention is not to debate the merits or concerns of either side of these polarizing feminism/SJW arguments, but rather focus on the implications of Laci’s revelations. Specifically, in her video, she finds herself walking a very fine tightrope between appealing to the fan base she has spent so many years of hard work cultivating and the need to feel authentic and congruent with her current views, and then wonders what the future holds in store. It’s a very difficult transition, but one that would normally hold very little interest or value to a general reader, except that it perfectly illustrates the cultural tensions permeating through our society today.

Let’s go through this video in a little more detail and then pull the lens back to see how it relates to broader social and cultural issues. In order to ease the sting of this transition, Laci needs to first restate and qualify her liberal credentials and then soften them to pave the way for making sense of her subsequent red pilling. According to her, “While yes, I am a feminist, I wouldn’t describe myself as the ideologue that people sometimes make me out to be.” I find this particular need for qualification particularly troubling, as it is indicative of a unique kind of groupthink in which the individual is in imminent danger of expulsion. In other words, yes I’m about to disagree with you on some significant issues, but I am still one of you, so please don’t throw me out just yet. I don’t mean to speak directly for Laci, but as someone who is analyzing this video, this is how it feels, especially as it follows a specific format that can be seen in countless other “confessional” type of videos.

She then provides a fuller backstory of her life and purpose, describing how she escaped a stultifying Mormon childhood along with some background on her half-Iranian heritage. These are all interesting tidbits but they primarily serve as signifiers of a certain kind of cred. She is both a refugee of the patriarchy and a recognized oppressed minority (perhaps Muslim?) all in one sentence. These are talking points that provide her legitimacy within her in-group, and I’m not blaming her, but again, I am establishing the difficult tightrope in on which she is about to embark.

Her videos have always presented a sex-positive message, and I completely support her mission. However, she also presented her views in a kind of format that appeals to certain pre-determined biases. In a way, it is this biased slant that has now placed her at a cross-roads. This is where she attempts to make her transition, for not only is she intersectional and sex-positive, but also a skeptic. “A skeptic?” she asks. “As in, not easily convinced of stuff, science is my rubric wherever possible because we are all prone to human error.” This all seems good in theory, but what Laci doesn’t realize is that her endorsement of science places her squarely against much of Far Left rhetoric. Unfortunately, her appeal to science will not help her escape the corner she has painted herself into.

With the tables set, she then goes into the specifics of which rabbit holes she has gone down. She starts with the “anti-SJW” rabbit hole. She almost apologetically (from my perspective) announces that she has “found channels that are well cited and reasoned, and you know, make some interesting points, sometimes I’m like, yeah, I agree with that or huh, I didn’t really think of that.” It’s as if she is trying to communicate to her audience that she simply stumbled upon some interesting content, rather than actually fraternizing with the devil, and oh by the way, she discovered they are not all devils. In other words, she is still with us (her self-described SJW audience), not them (the anti-SJWs). What’s especially troubling about this is that her comments are an admission that previously she, and still currently her audience, have little to no exposure to counter-arguments and really have no idea what people who disagree with them are thinking. To me, this is highly exemplary of in-group isolation and willful ignorance.

She then discusses Far Left censorship efforts of what they consider hate speech and makes some poignant comments about how feminists “cannibalize themselves as usual” as exemplified by the current Tuvel/Hypatia transracialism controversy. If you are not familiar with it, I would go ahead and click the link to familiarize yourself before reading further. Laci is extremely troubled by the hostile reaction of Tuvel’s academic colleagues, “The accusations are a complete misrepresentation of her argument, to an extreme degree,” she states. “This makes the whole ordeal even more troubling, these are not grounds to censor an academic paper, they are not grounds to ruin someone’s academic reputation,” she continues. Laci finishes her analysis of this sordid affair with a poignant question, that perhaps reflects her own anxieties of “coming out,” “What’s the end goal here, is it that only a specific perspective can be heard?” As Laci alludes to, these issues around censorship and in-group cannibalization will perhaps play an exceedingly important role in Laci’s subsequent experiences, whether she realizes it or not, but as I’ll illustrate momentarily, I suspect she does.

Let’s cut to the chase of Laci’s main thesis. She is now in full contact with anti-SJWs and is planning to host online debates between both opposing sides. What does the future hold for her? Will she be able to keep her audience and build upon it by expanding the Overton window? Unfortunately, and this is where the societal piece comes into play, I suspect not.

Laci is not the first person to try to go down this route. Indeed, Dave Rubin, a liberal stand-up comedian, who previously worked for “The Young Turks” political commentary show, paid a severe price for going solo and starting his own show with guests on both sides of the political aisle and of all manner of intellectual persuasion. As he has disclosed, he has lost most of his friends over the past years and has even been labeled as a bigot and homophobe, even though he is gay. The end result though, is that Rubin has developed hundreds of thousands of new fans who are open to his classical liberal message and is now making a good living fully-funded by fans.

Indeed, I predict if Laci Green continues down this path, she will probably follow a similar trajectory as Rubin. She will be welcomed with open arms by a more moderate crowd and will go on all of the anti-SJW talk shows (and according to a Twitter post she has already been booked on Rubin’s show). She will lose a lot of fans but will add many more. The classical liberal YouTube channels such as Sargon of Akkad and Shoe on Head are wildly popular, while SJW oriented programming from MTV and BuzzFeed are known for their high multiples of thumbs down ratings.

But most importantly, she’ll lose a lot of friends. Maybe most or all of them. If she thinks she can present diversity of opinion, with appeals to science, and be met with acceptance and rational discussion by her previous in-group, she may find herself in for a rude awakening. And unfortunately, this is exactly where we are at as a society. Isolated pockets of small groups policing the ideas and language of others. To Laci’s credit, she is courageous enough to speak out in congruence with her values. But most will just shut up and remain silenced in their own private Kafkaesque nightmare.

I’ll leave the last thought to Laci’s final comments in her video. “This is a pretty big concern of mine, I’ve felt this way for a long time, it affects my work, it affects the way I can interact with people, the things I can talk about, the people I can talk to.” Perhaps her coming experiences will serve as a litmus test for the future of free speech. Let’s all heed these concerns and work together to create a different kind of society. We can and should do better than this. 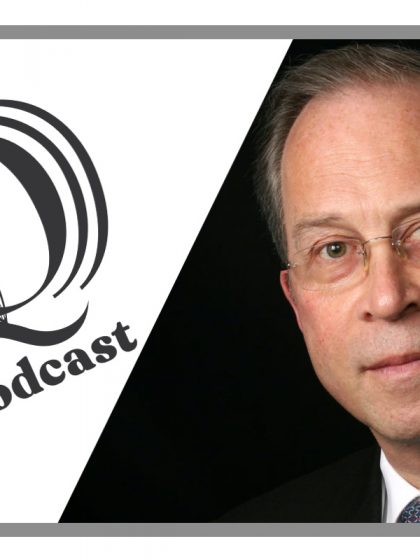