In 2009, the primatologist Frans de Waal published a bestseller called The Age of Empathy, in which he suggested that humanity might be rediscovering its propensity for cooperation and kindness. No longer would we be fooled by the myths of politicians and economists about our apparently selfish nature. He cited as evidence for this the recent election of a man who seemed to speak about empathy more than any other, Barack Obama. As Wordsworth famously wrote about the start of the French Revolution: “Bliss was it in that dawn to be alive, But to be young was very heaven!” How much older and sadder the West seems today — its conversations about politics and ethics bitter and polarized, all basis for rational disagreement evaporating before our eyes.

And yet, de Waal’s claim that we are “pre-programmed to reach out” has not been dispensed with — in fact, many continue to believe that the world is awash with empathy. Only there is now a growing suspicion that this might actually bear some responsibility for our discord. In 2012, a collection of papers entitled Pathological Altruism signalled the start of a new trend of skepticism towards empathy and compassion. Behind it lay the claim, as radical as it was blindingly obvious, that precisely because empathy is an evolved mechanism, it might have unintended consequences in the modern world.

Since then, psychologists and sociologists have been exploring the dark side of altruistic behavior, especially with regards to political and cultural tribalism. Jordan Peterson and Christine Brophy have discovered that so-called ‘Social Justice Warriors’ tend to be high in empathy towards the vulnerable, but draconian towards those perceived to be a threat. Similarly, Bradley Campbell and Jason Manning have pointed out that partisanship flourishes in a “victimhood culture,” because people respond to appeals from those they identify with socially.

These seem like lessons for the left especially, but as Donald Trump’s presidential campaign showed, the right has its own sinister uses for empathy. Nationalists have long used the propaganda of victimization to foster in-group mindsets, and to motivate, in Jonathan Sacks’s phrase, “altruistic evil” towards outsiders and scapegoats.

Be all this as it may, the notion that what the world really needs is less empathy still strikes most people as absurd. Are these not cases of too little, rather than too much empathy? Is the cardinal definition of empathy not to “place yourself in somebody else’s shoes”? How would our close relationships function without it? And above all, without the capacity to be moved by another’s suffering, how is good supposed to come into the world? 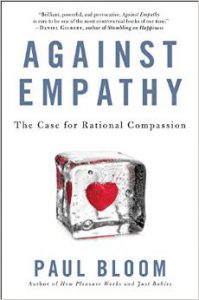 These questions point, more than anything, to an almighty confusion about how phenomena like empathy, compassion, and altruism work and relate to one another. For this reason alone, we should welcome the most direct assault on empathy to date, Paul Bloom’s much-discussed recent book, Against Empathy: The Case for Rational Compassion. Let’s take that adage about “placing yourself in someone else’s shoes.” As Bloom points out, it confuses two things that don’t necessarily go together. One is cognitive empathy, or “social intelligence,” which means the basic ability to grasp someone else’s point of view. This is rightly valued. Bloom’s adversary, however, is what he sees as empathy proper: feeling another’s pain as though it were your own.

This kind of emotional or “affective” empathy is not voluntary, of course, but according to Bloom, nor is it a good basis on which to act in public life. This claim is based on two main observations. First, to embrace empathy is often to abandon perspective and rational judgment, meaning that “our interests fail to coincide with any reasonable assessment of where help is needed most.” And second, echoing some of the research I cited earlier, empathy is actually quite picky about which shoes it enters. It conforms to our existing prejudices, and leads people to seek harsher punishments for perceived enemies, finding some of its purest expressions in “us versus them” situations.

That empathy can be divisive should scarcely be surprising. How often do partisans seek “single identifiable victims” — whether mistreated welfare claimants or destitute veterans — to frame a particular agenda in emotional terms? Once a debate has become suffused with empathy, all appeals to the bigger picture are easily dismissed as callous. And worse, the consequences can reverberate far beyond the debate itself.

Arguably the great moral fiasco of our day, the Western response to the migrant and refugee crises in southern Europe, has shown all the shortcomings of empathy that Bloom describes. An image of a dead child washed ashore achieves a greater response than five years of mass-casualty shipwrecks, not to mention figures showing the displaced climbing into the millions. Since this is how we’ve learned to understand suffering, the urgency of the problem ebbs and flows with photogenic tragedies and compassion fatigue, leaving governments unsure of how they should act. 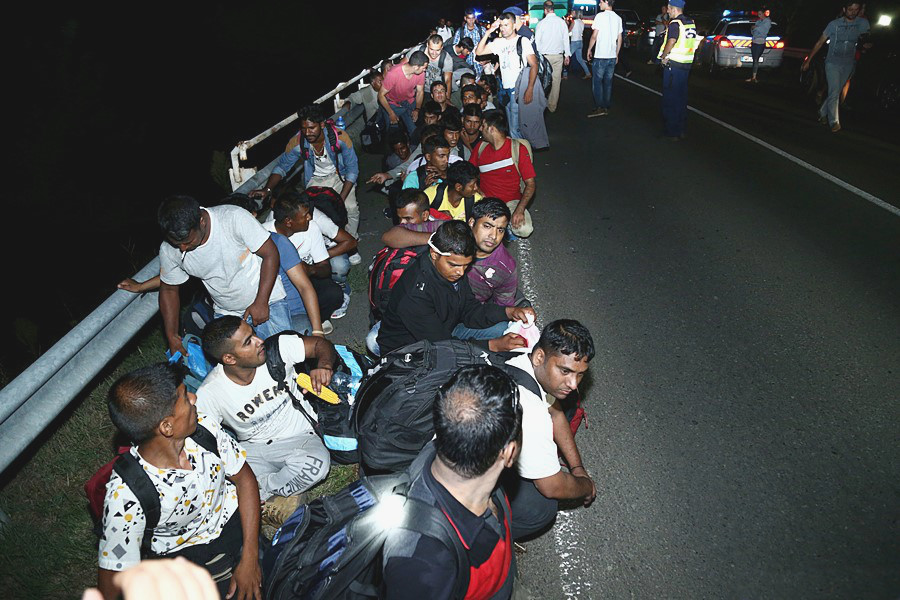 Migrants along the Western Balkan route crossing from Serbia into Hungary, 24 August 2015

When action did come, it was grand, magnanimous — and shortsighted. Germany’s open invitation to refugees travelling through the Balkans was a balm for Europe’s conscience, but first-come first-served is hardly an effective policy for helping the most vulnerable. Moreover, the episode pushed the entire continent’s politics to the right, meaning that as the German government backtracks, refugees pile up in Greece where they can least afford to be helped. And through all of this, anyone suggesting we discriminate on the basis of need has been met with a bizarre insistence that it’s cruel to distinguish, for instance, between migrants and refugees. It’s almost as if good intentions are worth more than good outcomes.

This last point, however, gets at a deeper problem with the role of empathy in our culture — one that Bloom’s book misses altogether. His critique deals with empathy in and of itself, and makes only passing reference to substantive issues, like police shootings or the caprices of media coverage, that underscore particular points. But there is no such thing as empathy per se. Like any human phenomenon, it doesn’t exist outside of concrete cultural and historical situations. Bloom would not have much material if Westerners did not watch TV, possess more resources than Africans, feel guilt in certain situations, or recognize the worth of people they have never met.

Deep-rooted problems like culture wars and a failure to think practically imply that vicarious suffering, more than ever, is welcomed not as a motivation for good actions, but as an end in itself. In other words, empathy is jealously defended because of its value to the empathizer. This, in turn, might point to an atomized, morally perplexed society, much of whose emotional sustenance comes from an ephemeral stream of online media. The feeling of helplessness that arises from passively consuming distant events is now central to the relationship of the individual to the world. In this situation, expressions of empathy and disgust, with their attendant comforts of tribal solidarity, are often all that stand between you and moral estrangement from reality.

Bloom admits that empathy is probably okay in personal relationships, but harmful in the public sphere. How workable is this distinction when politics is personal, and the ideology is the new family? Before we even start to think about how something like “rational compassion” might translate into a meaningful system of values, we need to consider why empathy is in such high demand.

Wessie du Toit is a freelance writer living in London.

Vaccine Rejectionism and the Left