Before he was elected prime minister in 1996, John Howard said during an interview with Four Corners that he wanted to see Australia as “a comfortable and relaxed country.” By expressing that vision, he was referring to Australia’s growing position in the Asia-Pacific region, as well as being a former British colony tied by culture to the Anglosphere. But, more importantly, he also referred to the Australian citizen being in a unique position to not feel guilty about their history and to look forward to the future. The phrase “comfortable and relaxed” was ambiguous enough for Howard’s detractors, who believed it reflected his social conservatism. They interpreted it as both an active evasion of confronting reconciliation with Australia’s indigenous peoples as well as a push for Australians to become lazy and ignorant. Nevertheless, Howard governed for 11 years thanks to a renewed relationship with suburban voters and a billion-dollar budgetary surplus.

If the word “relaxed” played a substantial part in Howard’s 11-year governance, then “comfortable” would explain why the Liberals suffered a massive defeat in this year’s federal election. On May 21st, 2022, the Liberals, led by Scott Morrison, were defeated by the Australian Labor Party, led by Anthony Albanese, who hails from the party’s left flank. Albanese is only the fourth leader in Labor’s history to be elected prime minister since the Liberal Party was formed in 1944. In coalition with the rural Nationals, the Liberals have dominated Australia’s post-war period for an accumulated total of 50 years, making them one of the most successful centre-right political parties in the Western world. Adding to that remarkable record, until the election last weekend, the Liberals were in power for nine uninterrupted years. But during the Liberal Party’s period of power and through its revolving door of leaders, Australia was far from “comfortable” and was losing patience with the party’s contradictions and insecurities.

The Liberals lost some of their most significant blue ribbon seats in some of the most affluent suburbs of the nation to a collective of independent candidates. The “teal independents,” as they have become colloquially known, were bankrolled by Simon Holmes à Court, the founder of a climate change activism organisation, Climate 200, and the son of Australia’s first billionaire, Robert Holmes à Court. With a makeup of mainly white, wealthy female professionals, these independents targeted their electorates on the premise that the Liberals’ lacklustre response to climate change and their underwhelming treatment of women—one of which involved a scandal that saw a junior staffer being sexually assaulted—needed to be rectified. Yet these seats, most of them in wealthy inner-city enclaves, were held by Liberal MPs who otherwise believed that Australia needed to aggressively cut its carbon footprint, as well as implement gender quotas to improve its reputation among female voters. But due to the party’s history of compromising with the Nationals, Simon Holmes à Court described these moderates as “fake.”

This wasn’t the first time such a scenario had happened. The seat of Warringah is currently occupied by Olympic skier Zali Steggall, who ran as an independent in 2019, and defeated the former prime minister Tony Abbott, who had held that electorate for 25 years. While Abbott continues to be held in high esteem by the conservative commentariat, his scepticism of global warming, opposition to same-sex marriage, and poor image with women did him no favours. During his time as opposition leader, he was the subject of an infamous speech by Julia Gillard that called out such hypocrisies.

What should a centre-right party represent in the 21st century? On the surface, the Liberal Party is supposed to represent the small business entrepreneur, the ethic of individualism, and limited government. John Howard once described the Coalition as a broad church, pointing to a political tradition that fuses Edmund Burke’s conservatism with John Stuart Mill’s classical liberalism. Yet, in reality, these three factions—moderates, conservatives, and centre-right—became uncomfortable being together under the same tent.

The careers of the three most recent Liberal prime ministers reflect these tensions. The moderates, led by Malcolm Turnbull, were fiscally tight but socially progressive. Tony Abbott, a conservative, was far more traditionalist. The centre-Right, also known as “the ambition faction”, was Morrison’s faction, a consolidation of both political philosophies, attempting to present them more pragmatically. Throughout each of their three terms, each personality fell behind in the polls and made choices that were antithetical to their beliefs.

Under Morrison, Australia reached a trillion-dollar deficit for the first time in its history, as a result of relentless spending on COVID, which would include the quasi-universal basic income program, JobKeeper. Then there was the botched move to push legislation promoting religious freedoms in Catholic schools that alienated the moderates because they presumed it would fuel bigotry towards LGBTQ+ students. Even if one disagreed with the platforms that the teal independents ran on, it is easy to understand why these once-safe seats had drifted away from the Liberals: the Climate 200-backed independents’ approaches were simpler and more coherent.

The seeming need to follow whatever was politically fashionable hurt the Liberals because such an approach alienated their traditional voters. Turnbull constantly faced derision within the ranks whenever he stated his belief that tackling climate change was necessary for the party to stay relevant. Scott Morrison, meanwhile, has always been reluctant to address climate change head on. He once held a lump of coal during a parliamentary debate, trolling the opposition to “not be afraid.” Months after his surprise election win in 2019, he was condemned for spending a family vacation in Hawaii while many parts of Australia experienced huge bushfires, costing millions in burnt homes and wildlife. But in November 2021, leading up to the Glasgow COP26 conference, Morrison declared that Australia would be committing to “Net Zero by 2050,” which would involve transitioning its fossil fuel industries into renewable energy like solar and wind. This change of heart was confusing at best. It divided the Nationals’ party room, which wasn’t willing to put it as one of their big priorities, while the progressive Left felt that his approach was limp compared to the commitments made by the rest of the world.

At odds with the moderates and the centre-Right, some conservative Liberal and National party figures drifted away to minor parties like One Nation, the Liberal Democrats, and the United Australia Party (named after the predecessor to the Liberals), attempting to ride the momentum remaining in opposing COVID safety measures. But that strategy proved to be unsuccessful at the ballot box. The most notable failure was that of Craig Kelly, who defected to the UAP after being censured in Parliament for his anti-vax views. Despite being the Australian politician with the largest Facebook presence (until his suspension in March 2021), and despite being backed by a massive ad campaign funded by billionaire Clive Palmer, Kelly managed to win only seven percent of the votes in his electorate.

It will be hard for the Liberal base to figure out what accomplishments Abbott, Turnbull, or Morrison can share with pride. For Abbott, reversing Labor’s Emissions Trading Scheme and being tougher on immigration were campaign promises that were achieved soon after coming into office. But aside from this, he provided no other vision. Same-sex marriage was recognised in 2017 under Turnbull, but through a gruelling referendum rather than direct legislation. But the AUKUS alliance initiated by Morrison is considered a shining achievement in national security, featuring a significant deal including nuclear submarines from the US and the building of a stronger defence against China, and which potentially brings huge steps towards a nuclear future.

Despite facing voracious criticism from France’s leaders for clumsily scrapping a similar deal with them (and from Turnbull, who initiated it), some polls show a majority of Australians approve the new security pact. This demonstrates that, for a centre-right party to be sustainable, it doesn’t need to align into either a purer conservative or moderate governance; it can be managed properly by a leader that can strike a balance between the two factions.

Morrison and Turnbull attempted that and fell short of the expectations of their bases. To break with the past, the Liberals and the Nationals need to bring innovative policy to the forefront. Home ownership is a core tenet of political conservatism, and it has never been harder for a young Australian to own a house.

In the final weeks of campaigning, Morrison promised young people that they could access their retirement savings to pay a first home deposit. It was a solid policy, what you would expect from a centre-right government.

If the Liberals seriously wish to reduce Australia’s carbon emissions to net zero, then they should attempt to change the conversation around nuclear energy by lifting the national ban and utilising unused uranium reserves. It’s not uncommon to see Liberal politicians supporting this idea. But since this clean energy source is opposed by the Greens and the Teals, there is an opportunity to achieve two things: undercut the Overton window and highlight the environmentalist hypocrisy from the Left, while boosting competition in the mining sector, which tends to be one of the biggest exporters of coal and natural gas.

Some recent events should have given the Liberals an advantage that could have earned them another term. With economic growth rapidly stabilising and unemployment at a historic low of 3.9 percent, Australia has proven to be one of, if not the biggest recovering OECD economies post-COVID. Most of the states relaxed the numerous restrictions that had given the country such negative media attention across the world, and Australia is now one of the most highly-vaccinated nations with a low number of COVID-related deaths. Meanwhile, the country has been actively reducing its carbon emissions long before any formal plans to pursue net zero were put in place, and before the recent spate of catastrophic natural disasters.

But Australia can’t feel confident when its leadership becomes complacent and while its people are left unsettled following frequent crises. When the Liberals faced a progressive opposition more demoralizing than they could have imagined, they were left flat-footed and failed to inspire. One can assume that John Howard had a different scenario in mind when describing a "comfortable and relaxed" Australia.

‘The Dawn of Everything’ and the Politics of Human Prehistory 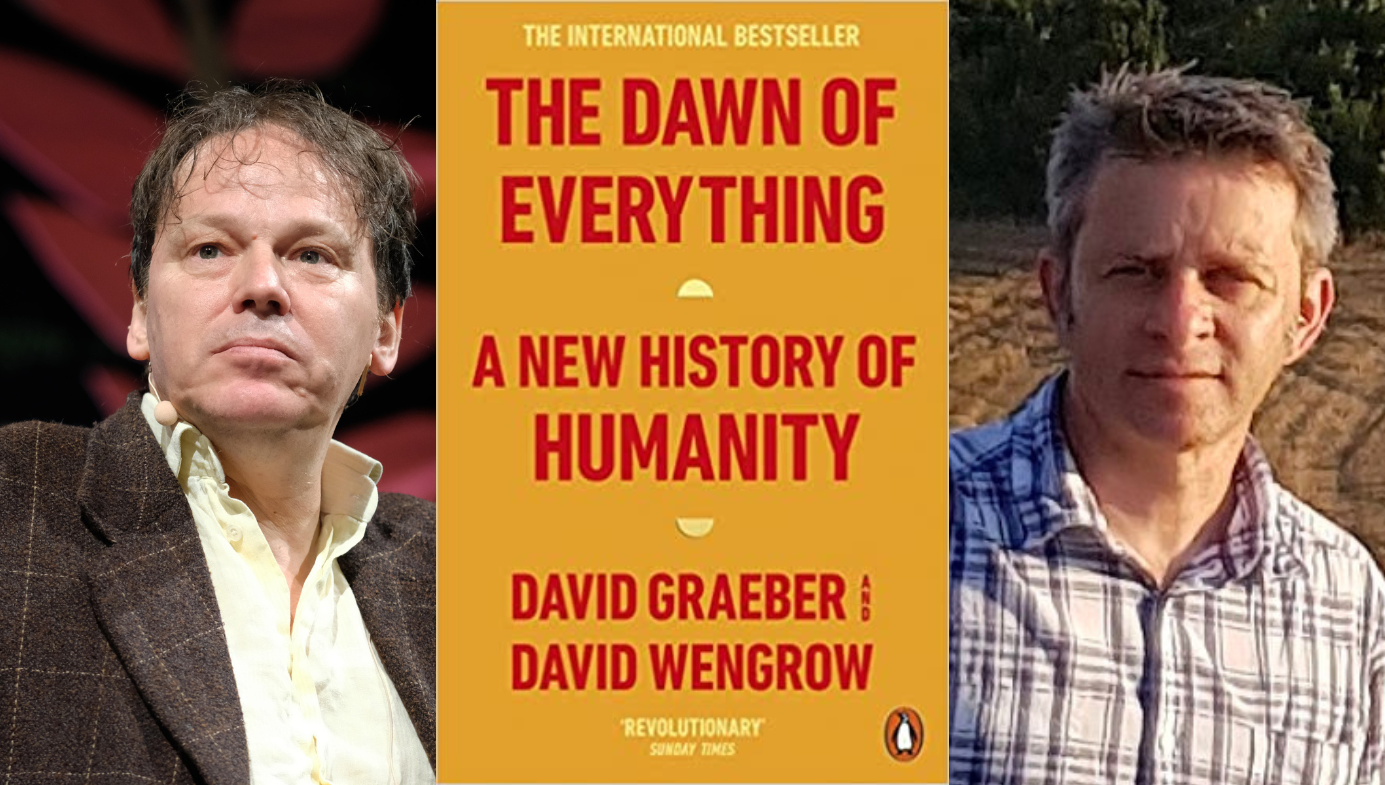