On Friday, White House spokeswoman Jen Psaki announced that President Joe Biden had ordered intelligence agencies to conduct a “comprehensive threat assessment” regarding domestic terrorism. “The [January 6th] assault on the Capitol and the tragic deaths and destruction that occurred underscored what we have long known,” Psaki said. “The rise of domestic violent extremism is a serious and growing national security threat.”

It’s beyond question that the riot at the Capitol building—in which crowds of incensed Trump backers invaded Congress, interrupted the certification of the presidential election, ransacked offices, and provoked deadly fights—was an unprecedented security failure. And a thorough investigation should be completed into why 2,300 members of the Capitol Police weren’t able to protect the building and its occupants.

But it’s also worth examining Psaki’s claim that the riot at the Capitol proves that domestic violent extremism in the United States is a “serious and growing national security threat” that could be used to justify the expansion of censorship, surveillance, and possibly new anti-terror laws. Simply put, this is an example of what might be called threat inflation. Often, it is the conservative side of the political spectrum that seeks a draconian response to public mayhem. But this time, it’s progressive elites.

I did not say threat invention. The riot at the Capitol was, to reiterate, a real and distressing display of mob violence. But it’s notable that, in a country where there are more guns than people, none of the rioters used firearms. While a Capitol police officer was tragically killed as a consequence of the mob violence, the only person killed by a gunshot was an unarmed woman who was shot by a police officer after she’d crawled through a window.

Senate Majority Leader Chuck Schumer actually went so far as to compare the Capitol riot to Pearl Harbor. This is absurd. More than 2,000 Americans died in the Japanese attack of December 7th, 1941. Four battleships were sunk, and the United States would remain at war for the next three-and-a-half years, until such time as it dropped two atomic bombs on Japanese cities. The Capitol riot, by contrast, lasted a few hours and cost a total of five lives.

Nor can we compare the Capitol rioters to sophisticated and deadly terrorists such as those who pledge allegiance to al-Qaeda and ISIS—as retired Army General Stanley McChrystal did two weeks ago. “I did see a similar dynamic in the evolution of al-Qaeda in Iraq, where a whole generation of angry Arab youth with very poor prospects followed a powerful leader who promised to take them back in time to a better place, and he led them to embrace an ideology that justified their violence. This is now happening in America,” he ominously warned.

This kind of ridiculous threat inflation—which presents a mob of a few hundred people as comparable to nihilistic multinational terrorist armies that have massacred tens of thousands of people and controlled large swathes of land in several countries—helps explain why the government militarized Biden’s (completely peaceful) inauguration week to the tune of 25,000 National Guard soldiers. A force this size would be more suitable for defending Kabul or Baghdad. 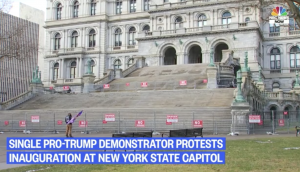 While the FBI warned of national unrest in all 50 states on inauguration day, it turned out that the rest of the country was just as peaceful as DC. In New York’s capital, Albany, a single pro-Trump protester showed up and peacefully demonstrated in front of the capitol building. Other state capitals featured similar scenes.

Meanwhile, some of the more sensational claims about what took place during the Capitol riot now appear to be incorrect. It was originally reported that some of the rioters had plans to capture and kill members of Congress. New York Democratic Rep. Ocasio-Cortez ominously claimed that she’d worried some Republican lawmakers were going to lead rioters to her to be kidnapped. But federal prosecutors later admitted that there is in fact “no direct evidence of kill and capture teams” among the rioters. The rioter featured in countless photographs holding zip ties—which were held out as evidence that there was some kind of kidnapping plot—apparently just took them from a table inside the Capitol building.

What of Psaki’s larger claim that there is a growing threat of violent extremism? It’s true that we have seen an escalation of political violence in the United States. But we should be able to put this violence into context, to help us understand what a proportionate response would look like.

A June 2020 report from the Center for Strategic and International Studies looked at American deaths from terror attacks between 1994 and 2020. The authors found that “religious terrorism has killed the largest number of individuals—3,086 people—primarily due to the attacks on September 11th, 2001, which caused 2,977 deaths. In comparison, right-wing terrorist attacks caused 335 deaths”—about half of them in the bombing of the Alfred P. Murrah Federal Building in Oklahoma City in 1995—“left-wing attacks caused 22 deaths, and ethno-nationalist terrorists caused 5 deaths.” 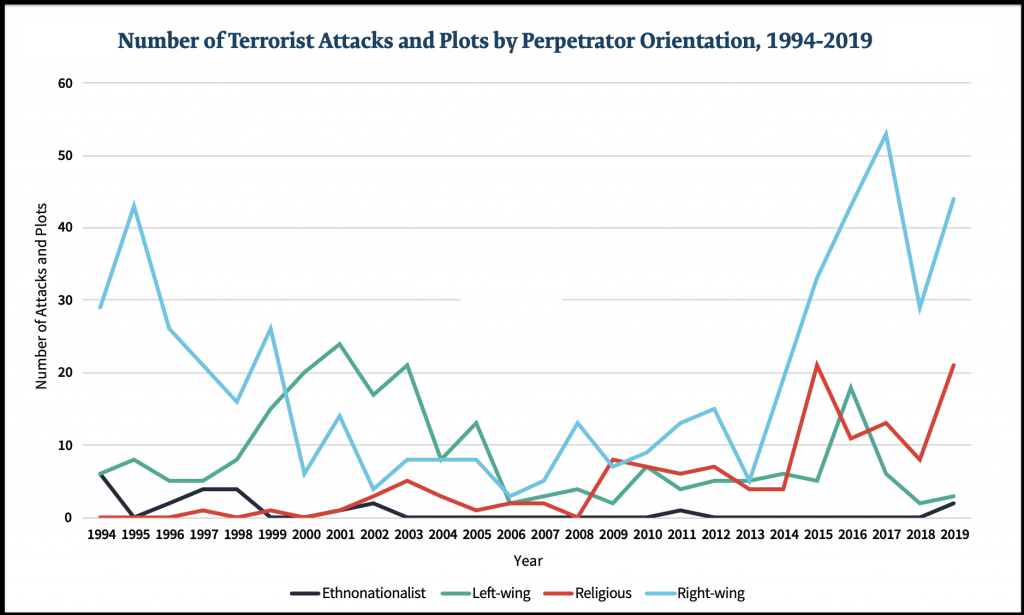 Preventing large-scale attacks should of course be a federal government priority. But should the average American really be worried about day-to-day terrorism? Does it deserve priority status in our politics and culture? In fact, as many progressives noted when conservatives were demanding a maximalist response to Islamist terrorism two decades ago, the numbers suggest the answer is no. During the current COVID-19 crisis, there’ve been many days when the United States lost more than 4,000 lives to the disease in a single 24-hour period—more people than we’ve had taken from us by terrorism over the past 25 years.

Terrorism is ultimately a weapon of the weak. By engaging in threat inflation, we expand the power and prestige of terrorists by allowing them to be more influential than they otherwise might be. Moreover, sensationalizing terrorist threats can sometimes have counterproductive results. In 2019, I reported on a study showing that intense media coverage of mass shootings seems to be associated with additional mass shootings: Distressed, agitated, or hateful people see it all over the airwaves and some grow inspired to take part in it themselves. Another study, this one from 2013, found that post-traumatic stress symptoms were elevated in Americans exposed to high levels of media coverage of 9/11 and the Iraq war, even if they had no other direct exposure to the trauma of these events. 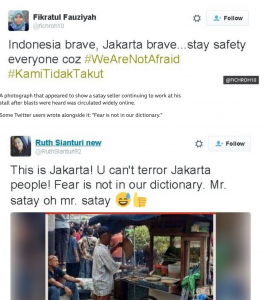 We should take inspiration from the Indonesians targeted by Islamist terror attacks in Jakarta in 2016. Though the terrorists attacked with both explosives and gunfire, the capital returned to normal in just a day. Many Indonesian social media users responded with the hashtag #KamiTidakTakut (“we are not afraid”) following the incident, and the spot of the attack even became a famous tourist attraction for people to buy food and take photos. “This satay booth just 100 meter from the terrorist attack area just 2 hours ago and this guy still grill his satay and people keep ordering the satay. This is Jakarta!! You can’t terror Jakarta People!! Fear is not in our dictionary,” one social media user wrote.

It’s an extreme example, perhaps. And no one would expect American street-meat vendors to be doing a brisk trade just hours after an attack on their own cities. But it is worth putting the threat of terroristic violence in context. Left or right, it’s something Americans have trouble doing.