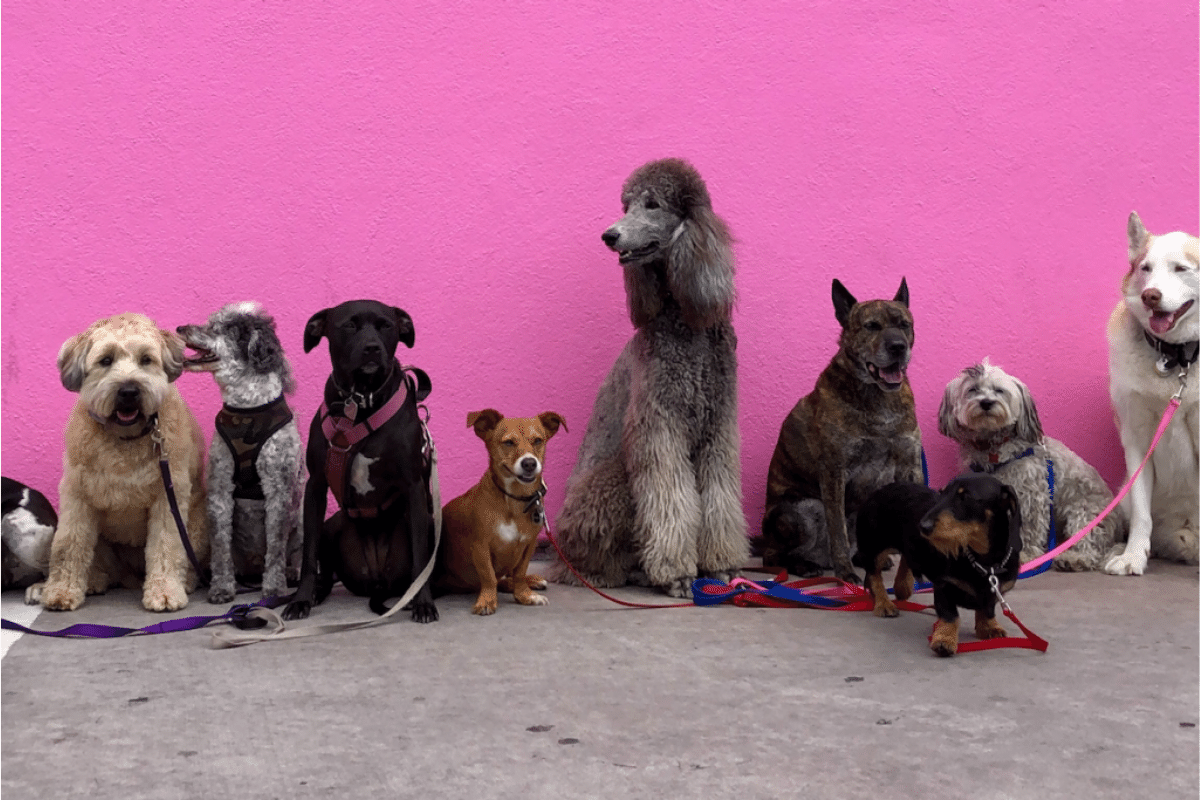 Man and dog share a long history. In much of the world, a history as old as humanity. The latest genetic evidence now tells us that the emergence of the domestic dog lineage occurred soon after the human expansion out of Africa 50,000 years ago, in the depths of the last Ice Age. We came. We saw. And we befriended. This we knew, but now we can closely examine how. A paper out today in Science uses 27 ancient dog genomes from the past 11,000 years to construct an evolutionary history nearly as rich as that produced by human population geneticists over the last decade.

The authors found five lineages of ancient dogs that were present at the end of the last Ice Age. These were the dogs that interacted with human migrations during the rise of agriculture and the fall of civilizations to produce the riotous dog diversity that we know today. Familiar breeds like the Pekingese and the St. Bernard, as well as stray Asian village mutts, they’re all the products of a deep shared history, which has left its imprint on the genetic variation of modern dogs.

The dog-human relationship has always been special in several ways. Our canine companions are well adapted to us, in that they can engage with humans socially in a manner no other animal seems equipped to, not even our closest relatives, the chimpanzees. This is thanks to tens of thousands of years of co-evolution. In a very real sense the evolutionary niche of the domestic dog is the human mind. Wolves may have higher IQs, and yet there are 1,500–3,000 times more dogs alive today. Perhaps it was smarter to be friendly than just smart.

Dogs are the only domestic species who have been with us since the Pleistocene, which ended 11,500 years ago. Crops, cattle, and cats all came later, during the Holocene, after the Ice Age. When Siberians crossed over to the New World 15,000 years ago, they also brought their dogs. These dogs served many roles. Friend, beast of burden, and yes, even food.

The New World dogs, who were present when the Spaniards landed in 1492, are one of the five great Pleistocene lineages from which all modern dogs descend. The authors of the Science paper call them the Neolithic Levant, Mesolithic Karelia, Mesolithic Baikal, ancient America, and the New Guinea singing dog. The last group includes Australian dingos and represents the ancient expansion of our species and its companions into Southeast Asia. Karelia is a region bordering Finland and Russia, while the Baikal dogs come from the lake of that name in east-central Siberia. These samples are termed Mesolithic because they are more recent than the Ice Age (7–11,000 years ago), but the peoples in Karelia and Baikal were still hunter-gatherers at that time. In contrast, the Neolithic Levant dogs date to 7,000 years ago, and were companions to agricultural populations.

All modern dogs can be thought of as a mixture between these five early Holocene lineages. Despite their highly specific names, the Karelian and Baikal lineages represent huge geographic distributions, not just the sample sites. In this regard, they are analogous to modern humans. As David Reich has shown in his magisterial work, Who We Are and How We Got Here, the past 10,000 years have witnessed the merging of disparate hunter-gatherer tribes to form the peoples we see today, threaded together from distinct strands. This naturally leads us to the question: did human populations bring their particular dogs everywhere they went?

Comparing the relatedness of humans and relatedness of dogs, the authors of the Science paper found that there was a definite correlation. Phylogenetic trees of both dogs and humans exhibited strikingly similar shapes, indicating common underlying histories of separation and diversification. Analyses comparing the genetic data of dogs and humans revealed that they were tightly correlated. In fact, the relationship between the evolutionary trees for dogs and for humans is close enough that the tree for humans explains much of the pattern we see for dogs. There is an underlying structure which spans the two species, but also novel and curious deviations that alert us to particular stories.

Some of the stories are straightforward and to be expected. The dogs of ancient Europe are a mix of the Karelian and Neolithic Levant lineages. The latter clearly tagged along with the early farmers expanding out of the Near East. Further south in Europe, the dogs were more like those of the Neolithic Levant, while further north they were more like the Mesolithic Karelian dogs. American dogs were genetically closest to the Siberian dogs from Lake Baikal. Additionally, both these groups were closer to the dogs of Southeast Asia than they were to those of the Levant. This recapitulates the pattern for Eurasian peoples; East Asians are more closely related to Europeans than they are to Middle Eastern people.

But a few surprising findings confound our expectations. Four thousand years ago on the Volga steppe of Russia, on the cusp between Europe and Asia, the Srubna people flourished as part of a broad continuum of Indo-European peoples that stretched far to the west. While the Indo-European relatives of the Srubna came to dominate much of Europe, their dogs did not. The burials of early Indo-Europeans in Europe yield dogs whose heritage connected them to the Eurasian steppe and the Srubna, but this was a fleeting affair. The dogs of Northern Europe were not replaced by the dogs of the steppe, though the people largely were.

Instead, the heritage of the Srubna dog persists far to the east. Chinese dogs are mostly a mixture of ancient Southeast Asian dogs, related to the New Guinea singing dog and the dingo, plus the Srubna steppe dogs. While half the ancestry of modern Europeans comes from people related to the Srubna, very little of that ancestry is to be found in modern Chinese. And yet dogs are not the only evidence of the influence of steppe people in ancient China. In 1200 BC, chariots became prominent during the Bronze Age Shang dynasty, chariots whose design indicates borrowing from the Iranian peoples of Central Asia, direct descendants of the Srubna. It seems entirely likely that if chariots were brought to China during the Bronze Age, then so were dogs. While the dogs of the steppe found no welcome in Europe, the Chinese adopted them as their own.

It also sometimes happens that the migration of dogs runs counter to the migration of peoples. While humanity evolved in Africa and spread to the rest of the world through the Middle East, the origin of African domestic dogs reflects the reverse. Indigenous African breeds such as the Basenji descend from dogs of the Neolithic Levant. These dogs were likely brought south and west by the Near Eastern pastoralists who also brought cattle to the continent. Meanwhile, the ancient canine populations of the prehistoric Levant have been totally replaced by groups from Iran and Europe, so the primary legacy of the dogs that were associated with the first human cities is to be found today in Africa.

But perhaps the biggest twist of the great canine diasporas is that their recent history is obscured and dominated by the phenomenon which has overshadowed our own species’ history: the rise, expansion, and domination of the world by Europe.

Modern European dogs do not descend from the full diversity of the continent. Rather, almost all European breeds today derive from a population best represented by a 5,000-year-old sample discovered in southern Sweden, an individual who was equally descended from Karelian and Levantine populations. The authors could not pinpoint the time or place that this replacement of the ancient lineages occurred, but by the time of the rise of European colonialism this single population had swept aside all the other ancient populations of the continent.

Today the majority of the ancestry of dogs across the world is from this single European population that flourished 5,000 years ago. In the New World almost all the ancestry is now European, with the exception of the Arctic dogs. The venerable chihuahua has less than five percent of its ancestry from the dogs of the Aztecs. In Africa and the Middle East, most canine ancestry is now European, while European ancestry is often the majority in many Asian dog populations, and is substantial even in the dingo. Decolonization may have occurred politically, but the evolutionary history and genetic variation of dogs illustrate how powerful the hand of history can be and how long its shadow persists.

Ancient DNA is like a genetic time capsule. We’ve spent these first decades honing our extraordinary new tools as we examine our own ancient human ancestry. But ours is hardly the only species with a history worth unpacking in such fascinatingly granular detail. Rather, we can look forward to the recent history of life on Earth being thoroughly illuminated via the evidence left behind by hardy fragments of DNA from creatures long gone.

The past 40,000 years has seen the transformation of our planet’s ecosystems due to humans. We live in the “Anthropocene” because our species has reshaped the planet to our ends. The evolutionary history of the domestic dog reflects humanity’s first, and longest, bioengineering experiment. We took a pack of wolves and transmuted it into a new species to walk alongside us. We bred dogs to be useful tools, but eventually they became our most loyal allies. We owe it to them to understand how they came to be as they are. And in the process we’ll inevitably continue to learn about ourselves.

Razib Khan is a geneticist and director of science at the Insitome Institute. He has written for the New York Times, India Today, National Review Online, and runs two weblogs, Gene Expression and Brown Pundits. You can follow him on Twitter @razibkhan or visit his website here.

Photo by Hannah Lim on Unsplash