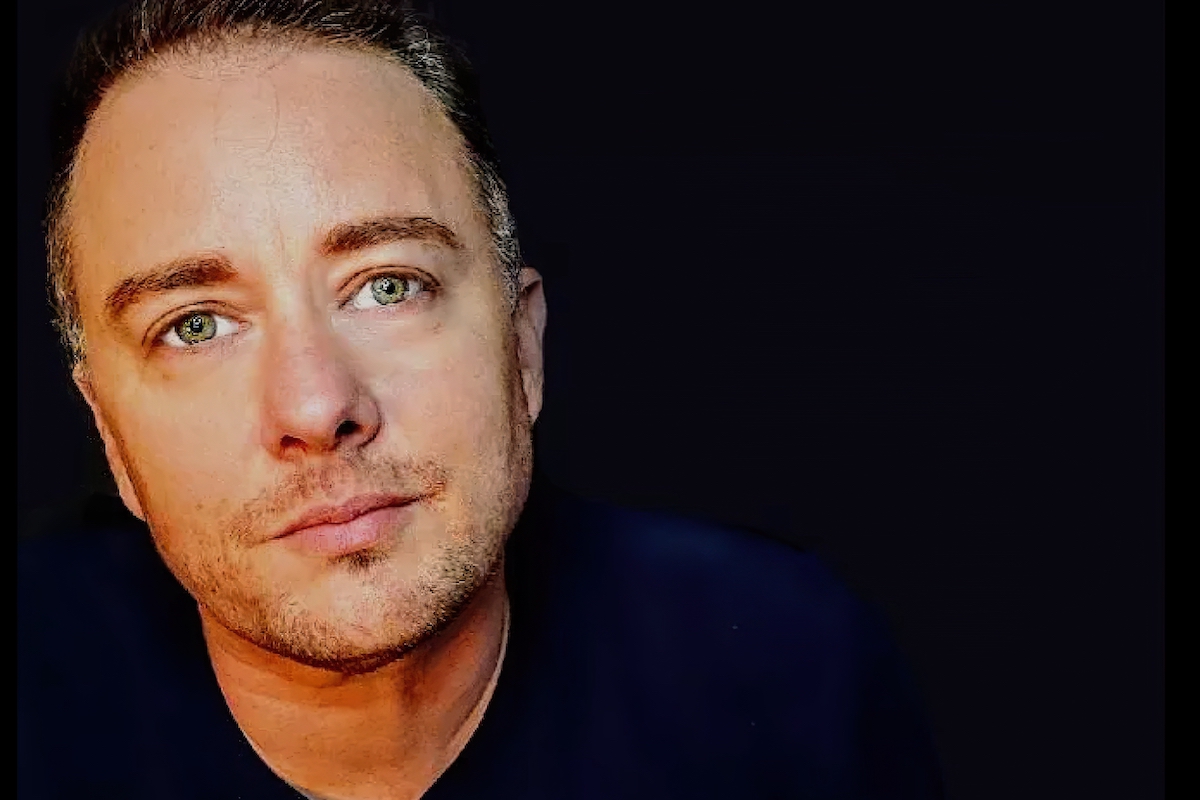 At a recent gathering, a daughter’s friend told us, “I’m probably trans because I don’t like female puberty.” This instantly got my attention, because I have known this child for years, and I never saw any indication of her being trans. I innocently asked her why she would say that. Was it a joke, perhaps? She replied, “I don’t like my boobs growing, and Reddit says I’m probably trans.”

That night, I tracked down these Reddit exchanges, and my jaw dropped when I saw how many people and organizations were heavily pushing the possibility of her being trans. But perhaps I shouldn’t have been surprised, given the way such attitudes have gone mainstream. This includes the pediatrician mom whose recent opinion piece for the New York Times was titled What I Learned as the Parent of a Transgender Child. For kids Googling this subject, the overall effect is the equivalent of one big glitter bomb going off on their screen.

I write all this as a 47-year-old transgender man who transitioned five years ago. I’m also a parent to three teenagers. Though I admire the good intentions of parents who seek to support their children, I have serious concerns about reckless acquiescence to a child’s Internet-mediated self-diagnosis. Many older transgender folks share these concerns, too. In many cases, we are people who have been quietly going about our lives in society for years, anonymously sharing shops, offices, elevators, and sidewalks with everyone else, without making a big deal of our identity or proselytizing to others. We like it that way. But given the current climate, we now need to speak out.

That one comment by my daughter’s friend caused me to investigate the organizations that purport to advocate on behalf of the trans community. I found that they typically push an approach based on quickly and enthusiastically affirming any indication of gender dysphoria. As someone who is trans myself, I know that this is the wrong approach. Yes, some children who say they are trans really will need to transition one day, because they have a lifelong condition. But parents who automatically assume that this is the case with their child aren’t necessarily following the child’s best interests.

Transgenderism isn’t a vague feeling, or a distaste for stereotypical roles. It’s a serious internal condition that causes you to want to become the opposite sex. Medical transition, such as the kind I went through, can enhance an illusion that helps some gender dysphoric individuals navigate the world with more comfort. It did for me, and it was the right path for me to choose.

I wasn’t “born in the wrong body.” I was born female. But I didn’t like it. So I changed my appearance, at significant monetary, psychological, and physical cost, with plastic surgery and hormones. My sex never changed, though. Only my appearance changed.

Anyone going through this is in store for a brutal process. Yet we now have thousands of naïve parents walking their children into gender-treatment centers, often based on Internet-peddled narratives that present the transition experience through a gauzy rainbow lens. Many transition therapies are still in an experimental phase—as you will learn if you become sick during or after these treatments.

During my own transition, I had seven surgeries. I also had a massive pulmonary embolism, a helicopter life-flight ride, an emergency ambulance ride, a stress-induced heart attack, sepsis, a 17-month recurring infection due to using the wrong skin during a (failed) phalloplasty, 16 rounds of antibiotics, three weeks of daily IV antibiotics, the loss of all my hair, (only partially successful) arm reconstructive surgery, permanent lung and heart damage, a cut bladder, insomnia-induced hallucinations—oh and frequent loss of consciousness due to pain from the hair on the inside of my urethra. All this led to a form of PTSD that made me a prisoner in my apartment for a year. Between me and my insurance company, medical expenses exceeded $900,000.

During these 17 months of agony, I couldn’t get a urologist to help me. They didn’t feel comfortable taking me on as a patient—since the phalloplasty, like much of the transition process, is experimental. “Could you go back to the original surgeon?” they suggested.

Whenever you question the maximalist activist line on trans affirmation, you are directed to The World Professional Association for Transgender Health (or WPATH) as a reference. But much of what you find there consists of vague phrases such as “up to doctor’s discretion.” Several lawyers suggested I had a slam-dunk medical-malpractice case—until they realized that trans health doesn’t really have a justiciable baseline. As a result, treatment often is subpar, as I have experienced first-hand.

Lupron, the hormone blocker some doctors seem intent on giving to kids like Tylenol, isn’t even FDA-approved to treat children with gender dysphoria. (In 2001, the manufacturer pled guilty to fraudulent sales practices with regard to its marketing as a prostate-cancer drug.) We don’t yet know its long-term effects off-label, despite the fact parents have been assured that its effects are safe and even reversible.

Here is what we do know: The long-term use of synthetic hormone therapy shortens lives. Specifically, these medications are associated with an increased risk of heart attacks, pulmonary embolisms, bone damage, liver and kidney failure, mental-health complications, and more. Almost a quarter of hormone-therapy patients on high-dose anabolic steroids (such as the testosterone taken by female-to-male transitioners) exhibit major mood-syndrome symptoms. Between three and 12 percent go on to develop symptoms of psychosis.

Children who claim to be trans typically are receiving such drugs at a pivotal time in the development of brains and bones. They’ve become a generation of guinea pigs, to answer such questions as: What will happen to a biological boy who takes sex hormones associated with the opposite sex (or vice versa), and grows up without the benefit of natural puberty? What happens to a male body on estrogen over the long term? No one knows.

In regard to the emotional effects of transition, many activists will refer you to a 2018 Pediatrics journal article entitled “Transgender Adolescent Suicide Behavior.” But the study reported therein was based on just three years of data—collected between 2012 and 2015. What matters is the long term. And in this regard, the gold standard is a study of 324 medically transitioned adults, based on 30-year longitudinal data. The authors found that completing sex-reassignment surgery was associated with “considerably higher risks for mortality, suicidal behaviour, and psychiatric morbidity” as compared to the general population. Kids who are suicidal before their transition will likely continue to be suicidal, and the most intense ideation often comes years after transitioning. (Transgender folks themselves sometimes speak anecdotally of a seven-to-10-year trans suicide “itch” observed within the community.) 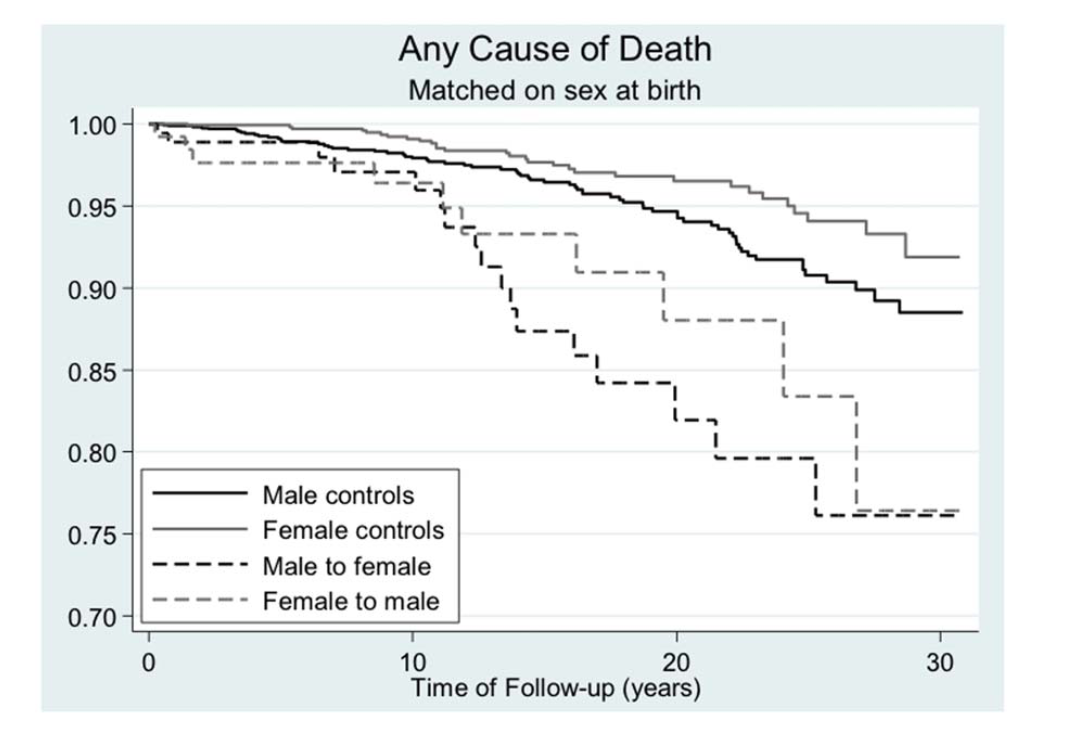 Death from any cause as a function of time after sex reassignment among 324 transsexual persons in Sweden. Source: NCBI.

None of this is information that radicalized trans activists seek to publicize. In 2019, they trumpeted an article entitled Reduction in Mental Health Treatment Utilization Among Transgender Individuals After Gender-Affirming Surgeries, published in the American Journal of Psychiatry, which purported to show the benefits of transition. When the same authors came back in August 2020 to admit that their data actually didn’t show any significant benefit from transition, few bothered to report the correction.

I have observed that when any argument is raised against a policy of no-questions-asked affirmation, activists seek to pre-empt discussion of the actual data by instead summoning up the specter of suicide—some version of “I would rather have a live daughter than a dead son.” Terrified parents are made to feel as if any expression of concern or skepticism is a gateway to the grave. It’s a passive aggressive form of emotional terrorism.

From my own experience, and from countless conversations with my transgender friends, I can report that most of us regret at least some—though maybe not all—parts of our transition. Even for those who transition successfully, finding peace has stages and takes time. At first, everything is new and exciting. Then, as the years go on, reality sets in, and you have to face up to the reality of biological sex, not to mention the health issues. This is not a life of glitter bombs.

The UK seems to be further ahead than North America in coming to understand that treatment decisions are happening too fast. The National Health Service (NHS) recently changed its stance on medically transitioning children, from presumed approval to a more cautious approach, even warning parents (accurately) that it is “not known whether hormone blockers affect the development of the teenage brain or children’s bones.” The NHS also notes that “most treatments offered at this stage are psychological rather than medical. This is because in many cases gender variant behaviour or feelings disappear as children reach puberty.” Perhaps the law suits are causing people to wake up. “I should have been challenged on the proposals or the claims that I was making for myself,” reports one British plaintiff. “And I think that would have made a big difference as well. If I was just challenged.”

As someone who has experienced medical transition first-hand, I am convinced that it’s better to err on the side on discretion, and leave life-altering decisions to adults who have the benefit of a fully developed brain. The next time my daughter’s friend, or any child, comes to me for advice on their gender dysphoria, here’s what I’d tell them: “There are people who need to medically transition to walk peacefully through their lives, and you, kiddo, might be that person. But, right now, you are a child, and your body is developing everything you need to be a healthy, happy, strong adult. When you grow up, you get to decide about your life.”

For parents, I would say this: It is simply not your right or duty to decide to medically transition your child. Remove that burden from your mind. Medical transition is for adults. The negatives associated with medical transition are vast, and you won’t be the one who lives with the consequences. It will be your child. If your child tells you they will kill themselves if you do not allow them to medically transition (perhaps following a script he or she is provided on Reddit or Tumblr), take them to the hospital so they can be treated for suicidal ideation. Suicidal ideation and seeking transition are separate issues, so separate them.

We talk a lot about oppression and marginalization. Well, I’m one of the people who’s been oppressed and marginalized—more so now that I have outed myself so that I can try to help others. The least you can do is pay attention to my message.

Scott Newgent, a 47-year-old transgender man and trans-father living in Texas, is the founder of TReVoices, a group of trans educators who oppose radical gender activism, and seek to educate politicians and families about the reality of gender dysphoria. He tweets at @ScottNewgent.