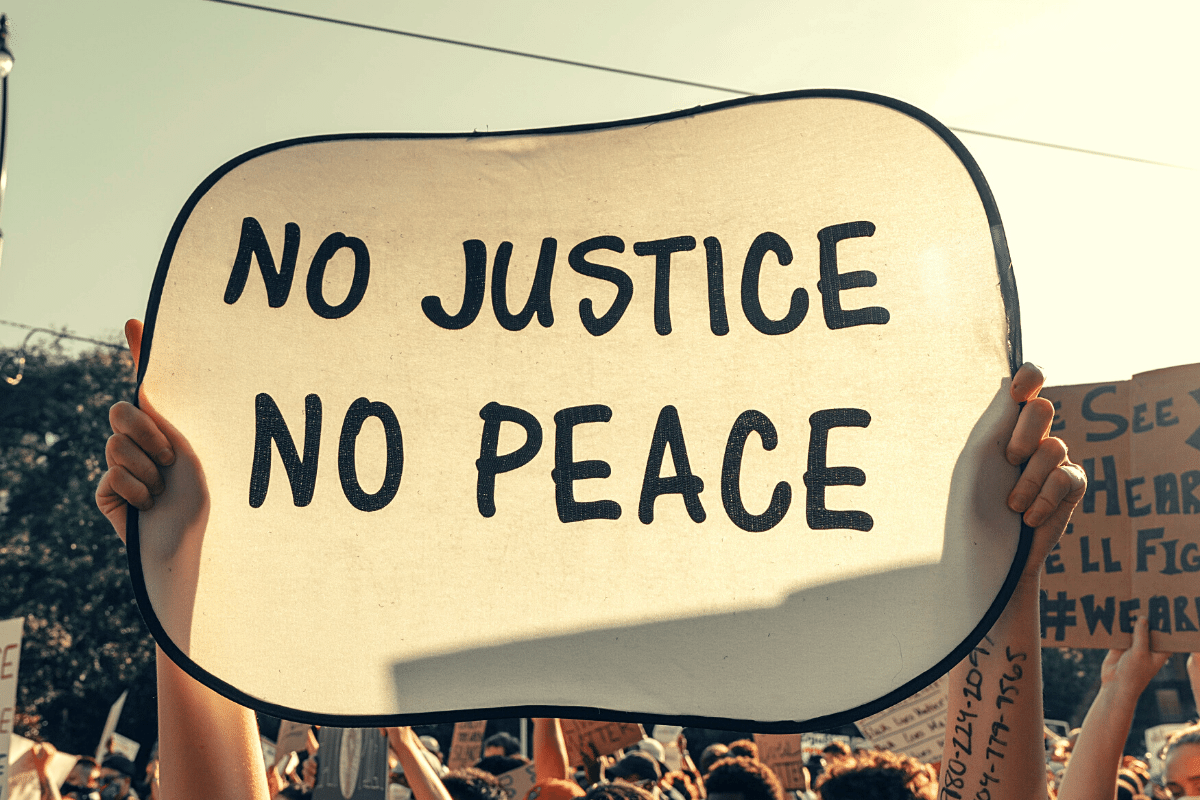 When moral visions clash, it’s common for people to assume their opponents have bad motives rather than different perspectives. And it’s usually wrong. If you advocate some policy you believe will save lives, whether it’s a plan for fighting COVID-19, increasing health-care coverage, or reducing homicide, your opponents probably don’t oppose your plan because they want more people to die. They may think their own plan will save lives, or they may be concerned about other values entirely. You may very well have fundamental moral disagreements with them, but the thing you hate most about their position probably isn’t what’s driving them.

We see this in the current debates over the new social justice movement. The critics of social justice activists sometimes talk as if what’s driving the activists is a kind of oversensitivity, as if they’re the equivalent of small children having tantrums to get attention. In 2016, for example, an Iowa state legislator introduced the “Suck It up, Buttercup” bill, which would have fined universities offering counseling and “cry rooms” to students upset about the 2016 presidential election. And in 2018 then-US Attorney General Jeff Sessions, in a speech about threats to free speech on college campuses, warned that schools were creating a generation of “sanctimonious, sensitive, supercilious snowflakes.”

The social justice activists aren’t snowflakes, though; they’re not people who just haven’t learned to suck it up. Sessions and others may perceive them that way—that is, the sensitivity the activists often display may be what they object to—but surely the activists themselves and those inspired by them are driven by moral concerns, by a vision of how to improve the world. Failing to understand that leads the activists’ critics to underestimate them. Even as the critics have scoffed that the activists will never make it out in the real world, corporations, major newspapers, mainstream politicians, and others out in the real world have begun adopting and implementing these activists’ ideas.

The “snowflake” language fails to capture the moral seriousness of social justice activists. If you understand them mainly as undisciplined and self-absorbed, you’ll expect the movement to fizzle out, but it’s clear that’s not happening, and won’t happen anytime soon. The activists’ seriousness is better captured by critics who see them as adherents of something like a new religion. John McWhorter has written about what he calls the new religion of anti-racism, with its own notions of sin and Judgment Day and its own rituals. For example, anti-racist classes and seminars commonly teach whites to regularly acknowledge their privilege, which McWhorter sees as a “self-standing, totemic act… based on the same justification as… fundamental sinfulness is as a Christian.”

This is closer to the mark, but the problem with many of these comparisons is that they’re coming from those who have negative views of both the social justice movement and religion. McWhorter says that some of the key anti-racist ideas aren’t very well thought out, but that this is a feature of religion: “It is inherent to a religion that one is to accept certain suspensions of disbelief. Certain questions are not to be asked, or if asked, only politely—and the answer one gets, despite being somewhat half-cocked, is to be accepted as doing the job.” Others may point to the “cancel culture” aspects of the social justice movement and compare it to religious people persecuting heretics, apostates, and unbelievers. This is all fine as it goes, but it is limited to criticism as opposed to analysis, and it overlooks a more fundamental aspect of the social justice movement: that social justice culture is a moral culture, similar in some ways and different in others to other moral cultures. It also overlooks other, more positive ways the movement resembles religious movements.

In 2014 Jason Manning and I first wrote about the rise of a new moral culture. We called it victimhood culture because among those who embrace it, victimhood comes to act as a kind of moral status. While there are right-wing versions of it, most of the activists embracing this new culture are on the Left, and they see themselves as pursuing social justice. This culture, then, which can also be called social justice culture, is a moral framework concerned primarily with documenting and fighting oppression.

This new moral culture differs from prior ones, particularly in dealing with conflict. The honor cultures of many traditional societies valued bravery above all else, and in these societies people needed to stand up for themselves, often by engaging in violence, to demonstrate they weren’t cowards and wouldn’t let others take advantage of them or insult them. A duel over an insult, which seems so strange to most of us, made sense in this context. Surely if someone calls me a liar, we might think, our firing guns at one another doesn’t prove I’m not a liar. But what it does prove is that I’m not willing to let such an insult stand without a fight, that I’m willing to risk death to try avenging it. It may not prove I’m honest, but it does demonstrate my bravery, which may be more consequential.

In the United States and elsewhere, honor culture eventually gave way to dignity culture. It became more important to recognize one’s own and others’ inherent worth, so reputations weren’t so important. People came to believe they should let most insults stand, and that they should rely on the legal system for solving more serious disputes.

Social justice culture is similar to honor culture in that people might be concerned even with small slights and insults (microaggressions) that would be ignored by people in a dignity culture, but it’s similar to dignity culture in that people often appeal to authorities and other third parties rather than handling the slights themselves. The elevation of one virtue over others—from demonstrating bravery in honor cultures, to recognizing the worth of every individual in dignity cultures, and opposing oppression in social justice cultures—occurs along with different ways of conceiving of and responding to transgressions. It is important to note in this context that people immersed in different moral cultures commonly find each other’s behavior offensive or incomprehensible. And just as those in dignity cultures object to the violence of honor cultures as being foolish and cruel, and just as those in honor cultures object to the avoidance of conflict or the appeal to law in dignity cultures as cowardly and weak, those in dignity cultures sometimes see social justice activists as self-absorbed and childish—snowflakes. What they miss is that their behavior makes sense given their assumptions. That doesn’t mean it’s always sincere—people don’t always have pure motives when they express moral outrage and condemn wrongdoing—but it seems it often is, and it’s probably as sincere as that of any other activist group.

That the activists are usually sincere doesn’t mean that they’re right. I have been writing for some time about the threats the new culture poses to free speech and due process. But those who are concerned about problems arising from the new culture would do well to understand that these problems don’t come because people just haven’t learned how to be adults, or how to live in the real world. Problems that arise come from the culture’s elevation of social justice concerns above all else and from the interpretation of nearly all human interaction and all social institutions in terms of oppression and victimhood.

Burton draws from social scientists in identifying the basic elements of religion as providing meaning, purpose, community, and ritual. What’s key though is that in our highly fragmented society people draw from religious traditions, spiritual practices, pop culture, diet plans, political ideologies, and hobbies in different ways to create their own personalized sources of meaning, purpose, community, and ritual. So the important question isn’t always whether something is or isn’t a religion—whether it’s CrossFit, SoulCycle, Harry Potter, transhumanism, witchcraft, positive thinking, the prosperity gospel, or the men’s movement. The question is how people draw from these sources to create their own remixed religion. Some people may immerse themselves totally in a single practice, while others, say, draw meaning from one source, purpose from another, and community and ritual from yet another.

Unlike many of the other new frameworks of belief, social justice culture provides a comprehensive vision of right and wrong, and of our place in the world, and as it becomes more institutionalized, it’s becoming the most likely contender for a new civil religion. As Burton puts it, “It provides both an explanation for evil (an unjust society that transcends any one agentic individual and, more specifically, straight white men) as well as a language, symbol set, and collection of rituals (from checking one’s privilege to calling out someone else, to engaging in enlightened activism) with which to combat that evil force… The new world that will inevitably arise from the ashes of patriarchal, racist, homophobic, repressive, Christian society will be infinitely better, fairer, and more loving than what has come before.”

The future of social justice culture

It’s clear that social justice culture is here to stay. It’s not a passing fad, and those who embrace it aren’t going to give it up when they leave college campuses and enter the workplace. Increasingly it is the culture of the workplace.

That doesn’t mean that social justice culture in its purest form, the form embraced by its most zealous advocates, will ever have widespread appeal. Remember that in a culture of remixed religion, people often draw piecemeal from different traditions and practices. Many of those who are partly connected to social justice culture likewise draw from it selectively, or in combination with other perspectives and practices. As the culture becomes more widespread, it may moderate and change.

However it plays out, those who have problems with the new culture, or with aspects of it, aren’t going to get anywhere simply by dismissing it or mocking it. To the extent that social justice culture offers a new moral vision, they’ll need to offer an alternative moral vision. It’s not sufficient to just offer skepticism or mockery; critics must offer alternative sources of meaning, purpose, community, and ritual. Whether the alternative vision is just the older culture of dignity, and whether the alternative religion, in the sense meant by Burton, is one of the older religions, like Christianity, or one of the older political ideologies, like liberalism, remains to be seen. It could also be something entirely new, or even a synthesis of social justice culture and something else, but it’s also possible that the social forces that gave rise to the emergence of the new culture will inhibit the acceptance of alternatives. And if alternative visions are successfully inhibited, social justice culture really will become our new civil religion.

Bradley Campbell is an associate professor of sociology at California State University, Los Angeles. Follow him on Twitter @CampbellSocProf.