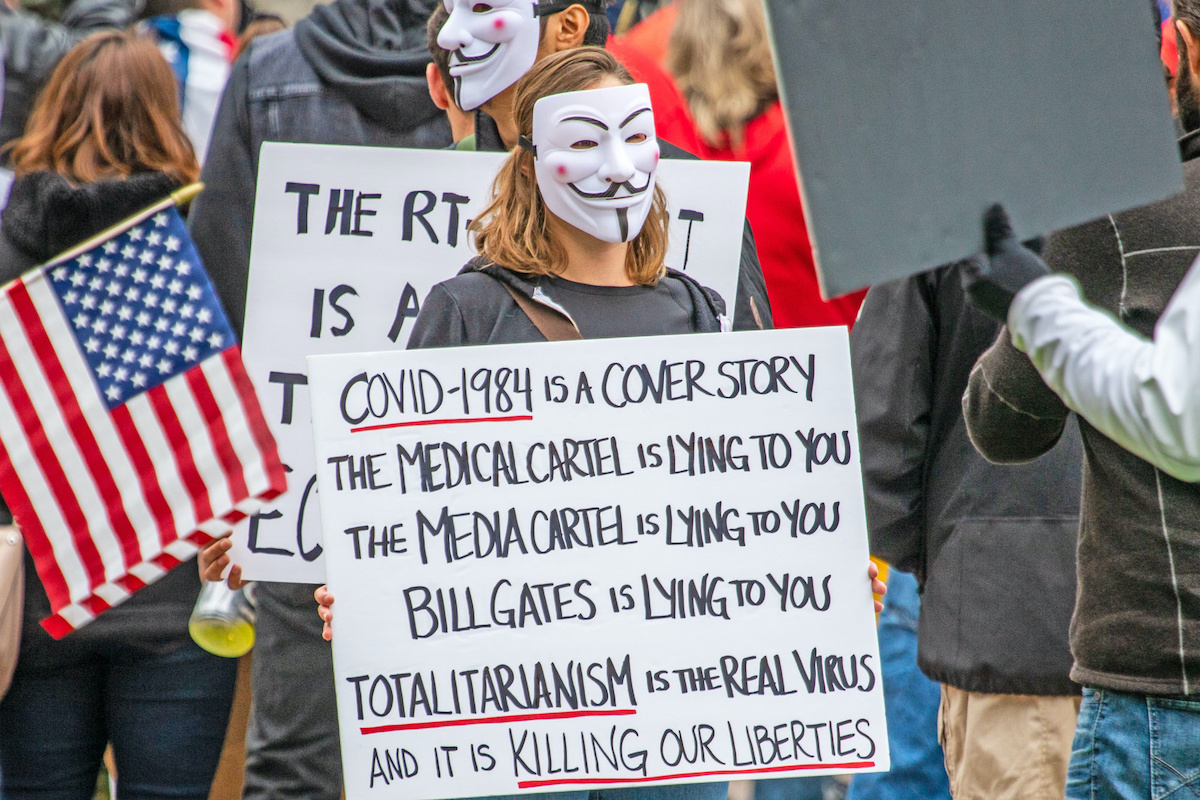 One reason why it’s surprisingly difficult to disprove many conspiracy theories is that they typically contain a real germ of truth, however small. In some places and eras, Jews really were overrepresented among communist cadres and the media. John F. Kennedy’s administration really did propose false-flag operations as an excuse to invade Cuba and assassinate Fidel Castro. Certain aspects of the World Trade Center collapse—including the fall of Building 7—really were odd and unprecedented. Some military video footage of unidentified aerial phenomena really is hard to square with conventional aircraft flight patterns. And then, of course, there are the various detours of the single bullet believed to have caused no fewer than seven entry and exit wounds to President Kennedy and Texas Governor John Connally on November 22nd, 1963.

This same complication applies to unfounded or thinly evidenced theories regarding the origins of the COVID-19 pandemic. Did the SARS-CoV-2 virus originate in bats sold at a wet market in Wuhan—or an artificial virus created in a bio-lab? Did Dr. Li Wenliang, the Wuhan Central Hospital whistleblower who warned his government weeks before officials locked down the city, really die from COVID-19? Or was he murdered? The whole area of inquiry has become a fertile playground for conspiracists, in part because no one can reasonably dispute the germ of truth behind their theories: the dishonesty and lack of transparency that often has characterized China’s response to the pandemic.

Conspiracism always flourishes when people are faced with uncertain, open-ended sources of suffering or evil. The mind abhors a vacuum of explanation. So when gaps in knowledge open up, the empty spaces are filled with available explanations that, however implausible, seem morally compelling. Usually, conspiracists target the suspected evildoers they had their eye on anyway.

Plagues and pandemics are especially popular feedstock for conspiracism because their causal agents—bacteria and viruses—remain invisible to the naked eye (and were invisible, full stop, until the invention of powerful microscopes). But the Jews targeted by medieval mobs for poisoning wells and other imaginary acts of biological terrorism were not invisible. Nor, today, is Bill Gates, whom some members of the pro-Donald-Trump QAnon conspiracy movement accuse of seeking to undermine the Trump administration now that impeachment efforts have failed. Anthony Fauci, the medical lead on the American government’s response to the pandemic, often is lumped in with this alleged “deep state” movement supporting the Gatesian agenda. An analysis by the New York Times found over 70 accounts on Twitter promoting the hashtag #FauciFraud, with some tweeting as frequently as 795 times a day.

In some cases, the theories are quite complex. In late January, a YouTuber named Jordan Sather proclaimed that the “government-funded Pirbright Institute out of the UK” possibly planned “the release of this disease” through modification of a coronavirus that might otherwise be used to vaccinate birds. The connection to Gates was that the Pirbright Institute once received a grant to study livestock antibodies from the Bill & Melinda Gates Foundation. This convoluted theory was given a boost on April 13th by fabulist Roger Stone, who told Joe Piscopo on his AM radio program The Answer that “Whether Bill Gates played some role in the creation and spread of this virus is open for vigorous debate.” He added that Gates “and other globalists are using it for mandatory vaccinations and microchipping people so we know if they’ve been tested.”

Given that anti-vaxxers have been spreading false rumors about vaccines for generations, and that microchip-based conspiracies have been common since the 1970s, it should not be surprising that COVID-19 conspiracists were able to tap into pre-existing networks of true believers (even if the assertion that the deep state has claimed Fauci—perhaps the most trusted man in America since Walter Cronkite—should test the credulity of even the most hardboiled conspiracy theorist).

As for Pirbright—a Surrey-based institute that, when it is not helping evil globalists spread diabolical plagues, dedicates itself to the study of infectious diseases among farm animals—a spokesman for the organization noted that its patent does not include any coronavirus-based vaccine that affects humans, that its work in this area isn’t funded by the Gates Foundation, and that “the patented work cited in the conspiracy theories involved infectious bronchitis virus (IBV) only, and we made four changes in the gene responsible for replicating the virus’s genetic material. This has weakened the virus so it is no longer able to cause disease and [thereby] has potential to be used as a vaccine, but has not yet been developed” (my emphasis).

One grain of truth bolstering the vaccine-related subniche of conspiracy culture is that many jurisdictions really do require citizens to get vaccinated for certain common diseases such as measles. And so it is not crazy to assert—as some conspiracy theorists do in the lead-up to more far-fetched accusations—that governments may, in time, impose COVID-19 vaccination mandates if a safe and effective vaccine is developed. What is crazy is to imagine that all of this will be in the service of some kind of Hollywood-villain-style genocidal or thought-control agenda, an idea that emerged during the original SARS epidemic in the early 2000s, the 2009 H1N1 pandemic, and the subsequent Ebola crisis.

Then there’s the anti-vaxxer claim that the ordinary flu-vaccine regime that governments have been promoting for years actually makes people more vulnerable to COVID-19—and since China allegedly ordered more flu vaccines in 2019 than in prior years, this somehow explains why the outbreak began in Wuhan and not, say, Wichita. This theory has been addressed in detail by alternative-medicine and cancer-quackery debunker Dr. David Gorski at ScienceBasedMedicine.org. Among other things, he cheekily points out that “antivaxxers love to claim that the flu vaccine doesn’t work,” which, if true, would undercut the idea that it could cause interference with other viruses. And so, “antivaxxers really need to make up their minds.”

Wireless networks, electrical grids, and cordless devices also have provided conspiracy theorists with rich fodder—since, like microscopic pathogens, they are invisible to the naked eye even as they surround us. (The same is true of the mind-control chemicals supposedly contained in the contrails produced by airplanes. Yet, oddly, with the skies now clear and almost entirely contrail-free during the pandemic lockdown, I haven’t noticed any radical change in human behavior.) And so the timing of the coronavirus outbreak following the rollout of 5G cell technology in many markets predictably served as a dynamo for certain conspiracists—including Woody Harrelson, John Cusack, and Robert F. Kennedy, Jr. Indeed, the latter added a twist by introducing the further idea that the collective lockdown many of us are now enduring might have been intended to “obstruct #5G rollout and has effectively ended the opportunity for mass public protests, which were our best hope for derailing the 5G robber barons from microwaving our country and destroying nature.”

Such theories, coupled to related claims that energy from 5G towers is the real source of COVID-19, even led to recent arson attacks on British mobile phone towers in Birmingham, Liverpool, and Merseyside. It also apparently led to a train engineer in Los Angeles derailing a locomotive near the Navy hospital ship USNS Mercy. He later explained to investigators that the ship had “an alternate purpose related to COVID-19 or a government takeover,” and that “you only get this chance once. The whole world is watching. I had to. People don’t know what’s going on here. Now they will.” As FullFact.org notes, there are almost too many 5G conspiracy theories to track, and they often contradict each other.

Perhaps the most Jason Bourne-ish conspiracy theory is that COVID-19 did not really involve any kind of wet market in Wuhan, but is actually a “bioweapon.” The germ of truth here is that many nations really have been researching bioweapons for generations, including research on such scourges as Ebola, Smallpox, and Anthrax. In 2001, a handful of Americans were killed by Anthrax delivered through the mail. And in 1979, anthrax spores were accidentally leaked from a Soviet military research lab near the Russian city of Sverdlovsk (now Yekaterinburg), leading to an estimated 100 deaths (although precise details were subject to the usual Soviet obfuscation, including the claim the deaths were caused by tainted meat). China’s autocratic form of government, press censorship, occasionally aggressive foreign policy, and repression of whistleblowers all make the idea that the virus was created by artificial means—instead of ordinary natural selection among animal-borne pathogens—seem like it could be credible, even if there is no real evidence for it.

In fact, the evidence points in the opposite direction. According to a genetic analysis of the virus published on March 17th in the journal NatureMedicine, “if genetic manipulation had been performed, one of the several reverse-genetic systems available for betacoronaviruses would probably have been used. However, the genetic data irrefutably show that SARS-CoV-2 is not derived from any previously used virus backbone.” The scientists noted the similarity of SARS-CoV-2 to bat SARS-CoV-like coronaviruses, concluding “it is likely that bats serve as reservoir hosts for its progenitor,” with the transmission to humans most likely occurring in late November to early December 2019. The fact that bats are mammals living in massive colonies numbering in the millions, and are regularly infected with virus-based respiratory diseases, makes the link to humans all the more credible.

These are just a few of the many conspiracy theories ricocheting around the Internet. A full catalog would be almost impossible to create, and would quickly become obsolete as old conspiracy-theory strains mutated into new species (much as with actual pathogens). This conspiracism will likely continue so long as people experience COVID-19-related fear and anxiety—emotions that always have been linked to conspiracist movements throughout history.

Even when there is no pandemic to worry about, all of us tend to harbor something that social scientists call a negativity bias—by which bad feelings assert themselves with greater perceived urgency than their positive counterparts. There are more words to describe pain than pleasure. There are more cognitive categories for negative emotions than positive. Bad impressions and negative stereotypes form faster and are more resistant to change than those that are positive. Losing money and friends is more painful to us than making money and friends is pleasurable. In the same way, negative global events generate more attention and causal explanations than positive events. Everyone asks, “Why is there war?” But almost no one asks, “Why is there peace?”—even though a broad examination of human history might suggest the latter question to be more apt.

One reason for this cognitive asymmetry is that human progress typically is made incrementally, in small steps, whereas catastrophic setbacks can occur all at once: Around the world right now, millions of businesses that took decades to build up may now go bankrupt because of a tragedy that has unfolded in a matter of months. Moreover, the mental habits we’ve developed through evolutionary processes are well suited to sensing the presence of large predators, but serve us poorly when the enemy can’t be detected. That’s when our thinking can go sideways, and whole societies become susceptible to conspiracist notions, which often represent mere extrapolations of existing populist political themes. Leaders around the world know this, and are leveraging our uncertainties and anxieties to grab more power, as in Viktor Orbán’s Hungary, Recep Tayyip Erdoğan’s Turkey, Benjamin Netanyahu’s Israel, Vladimir Putin’s Russia, and, especially, Xi Jinping’s China.

This is one of the great ironies of conspiracism: Unjustified fears about fictional conspiracies can themselves be leveraged by governments to facilitate their own very real machinations, which in turn reduce public trust. Thus does the cycle of conspiracism continue.

Michael Shermer is the publisher of Skeptic magazine, a presidential fellow at Chapman University, and the author, most recently, of Giving the Devil His Due (Cambridge University Press), a defense of free speech.