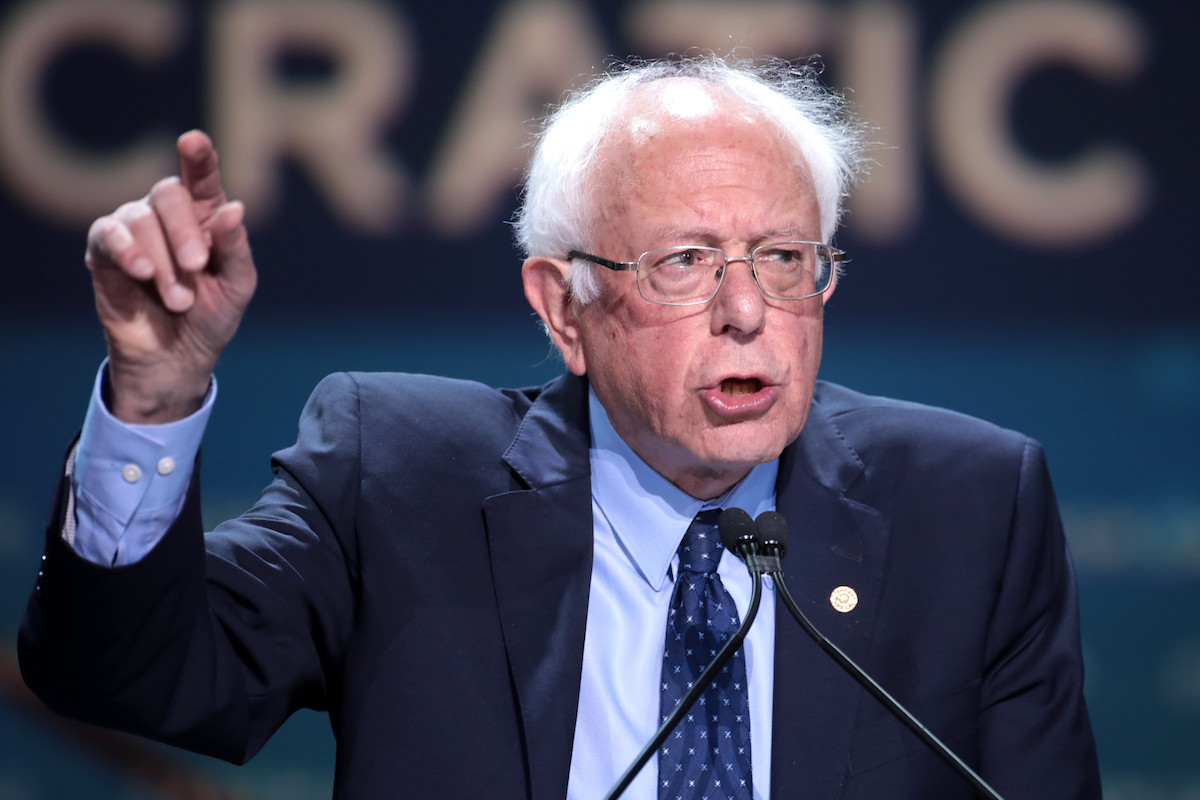 In the months since the outbreak of a deadly global pandemic, Americans have rediscovered the world outside. None of the contenders vying for the presidency in 2020 has articulated a particularly coherent or ambitious global role for America. But the only candidate who seems to understand at least that foreign policy is not a dispensable part of American politics is Joe Biden. It is possible that the appearance of a lethal virus incubated in the wet markets of Wuhan has persuaded voters in the Democratic primaries that Biden is the only viable option in a world of such bleak possibilities.

The current incumbent, of course, is wedded to an “America-First” program—in truth, little more than an irritable mental gesture, to borrow Lionel Trilling’s gruff description of conservatism—that is plainly ill-suited to a superpower in an interconnected world. Trump’s brash pursuit of transactional dealing and short-term self-interest is also incompatible with the design of American power in a democratic order. Meanwhile, the Democratic field, evincing a deep-seated provincialism, has not inspired confidence about its willingness to defend U.S. interests and uphold U.S. values in an increasingly hostile geopolitical environment.

This is most particularly true of Bernie Sanders. There has been no shortage of confusion about the leadership we might have expected from the aging but callow Vermont senator, but some of his defenders have implausibly claimed that his election would make Putin tremble. Sanders himself has promised to scale back America’s power in the world without ceding any of its influence. His surrogates liked to say that downgrading the U.S. military is actually part of an idealistic agenda to defend freedom abroad. In fact, Sanders’ vision betrayed an urge to leave the world alone in the vain hope that the world would return the favor.

A worldview should surely first be a view encompassing the world. But, by even this standard, the vision of many progressives fails to qualify. Their own version of “America Firstism” can be traced back to Randolph Bourne, who, as part of Greenwich Village’s “lyrical Left,” was a leading opponent of American engagement in the Great War. Bourne lobbied against that intervention on the grounds that because “the promise of American life is not yet achieved… there is nothing for us but stern and intensive cultivation of our garden.” Sanders seems to have buttressed Bourne’s injunction with a potent strand of specifically Jewish thought. The Hebrew prophets claimed that if the ancient Israelites honored God by acting justly (that is, if they stopped abusing the poor), He would protect them from Assyrian and Babylonian conquerors. They would live at peace in their land forever and, according to the Book of Isaiah, be a light unto the nations.

These two traditions combine to produce in a presidential candidate a crabbed conception of American purpose in the world—a conception that permits a glimpse of the domestic garden and little else besides. And it has been vividly displayed during both Sanders’ lengthy political career and his latest campaign in his style and substance. The socialist contender seldom missed a chance to belittle the constitutional role of the presidency, as when he suggested that the title of “commander-in-chief” is of no greater import than that of “organizer-in-chief.” One might expect a candidate who claims the mantle of Franklin Roosevelt to grasp the United States’ historic vocation as democracy’s arsenal. But as a consistent opponent of American power, Sanders has stubbornly refused to acknowledge that “anti-militarism” would invariably diminish America’s global influence.

Skeptics on this point should acquaint themselves with the argument of Robert Kaplan’s Imperial Grunts, an illuminating portrait of the network of military bases America maintains in ungovernable spaces to deter its enemies and expand its influence on foreign shores. From Colombia to Mongolia and the Philippines, the U.S. military is not merely conducting counter-insurgency warfare in what Kaplan calls “Injun country,” but acquiring clout in remote backwaters by training local troops to operate under constitutional government.

But Sanders’ prescription for America’s geopolitical conduct ignores all this. Act justly at home and our home will be secure, he assures his voters. In this conception, power—even great power in the age of Pax Americana—is obsolete in global politics. Domestic nation-building offers the recipe for success in the world, or at any rate, avoiding costly entanglements abroad seems to be a recipe for success at home. Sanders and his acolytes often point to the social democratic model of Scandinavia as guidance for domestic policy. However threadbare this narrative, it is no coincidence that Scandinavia has traditionally absented itself from an active role in global affairs (albeit with a fig leaf of humanitarian action), and perhaps this is what truly appeals to Sanders’ disciples.

The yearning for a Scandinavian foreign policy allows less extreme Democrats in the mold of Senator Elizabeth Warren to profess solidarity with the besieged people of Idlib while abjuring the means to break the siege of Idlib. But at the very moment Warren insisted there was no military solution to the Syrian crisis, that crisis was being resolved militarily—by the enemies of the Syrian revolution. Subsequently, Turkey intervened to halt Assad’s advance and brought at least a temporary respite to the crisis—likewise by military means.

Although the professional class that now occupies a dominant position in the Democratic Party is beginning to sweat an economic revolution from below, its wiser heads should recognize that his embrace of a world stripped of American power is no less speculative and risky than his advocacy of Medicare for All. His strong distaste for American power, and a corresponding sympathy with America’s foes, forecloses the possibility of a decent internationalism. This is why, however internationalist it is in theory, the Left frequently fails to be internationalist in practice.

The desire to focus America’s finite energy and resources on creating a more just society at home is not new. But neither is the counter-argument. In A Foreign Policy for the Left, the liberal philosopher Michael Walzer makes a bracing case for what he calls an “internationalism of agency.” Although the default position of leftism has become a strict neutrality in world affairs in deed (if not always in word), there was a time when a policy of national strength and solidarity with the oppressed prevailed on the Left.

The searing experience of World War Two—and of the low, dishonest decade of national weakness and appeasement that preceded it—instructed mainstream liberals of the day that the cause of liberty needed to be defended abroad if it was to prevail at home, and that this could only be achieved with American engagement and, in the final analysis, American power. Human nature and the international system needed to be understood plainly and stoically, and this meant disposing of utopian fantasies about the end of conflict that had disfigured the liberal creed during the interwar years. The architects of American strategy in this period took responsibility for upholding the world order, lest American retrenchment invite further aggression from authoritarians bent on conquest and plunder. Whatever the cost of America’s worldwide imperium, it would pale beside the price tag imposed if the world slipped into another devastating conflict.

To discharge this solemn responsibility, American leaders kept their nation’s military might beyond challenge, and wielded it with confidence. They garrisoned hundreds of thousands of troops overseas, especially in Europe and along the Pacific Rim where the pillars of world order seemed to be the most crucial but also fragile. They fought wars in distant lands unknown to most Americans but vital to maintaining what Truman’s Secretary of State Dean Acheson called an “environment of freedom” in the world. They assured the rights of international trade in the global commons. They amassed arsenals of frighteningly destructive weapons to deter threats to American primacy.

But at some point during the course of the Vietnam War, this armed liberalism gave way to a more insular and reactionary strand of progressive thought: anti-imperialism or even anti-Americanism. It was not merely disarmed of the belief in power, it also often seemed to abandon faith in liberalism itself. In Walzer’s estimation, the modern reluctance to take sides in ideological or martial struggles for power has been a “highly principled failure.” The aversion to forceful action on the world stage is essentially a negative posture. It is often “lazily adopted and rigidly held,” and agitates to “bear witness” (in Obama’s preferred formulation) to the abuse of human rights while resisting the deployment of military power that might prevent the abuse of human rights. This passive view rests on the assumptions that little good can be found in foreign adventures, and that the improvement of humanity begins at home.

Be that as it may, there is an awful lot of humanity to be improved away from home, too—and a great deal of mischief to be found through American abstention. “A wholesale rejection of militarism (and a reflexive refusal to vote for the military budget) is the most common Left position,” Walzer writes. The problem for the Left is that its deep distrust of power is an invitation, as Robert Frost once observed, not to take its own side in a fight. And in this way, the higher goals to which the Left often pays lip service—the promotion of democracy and human rights—are impeded and betrayed. This contradiction often makes modern leftism the author of its own misfortunes. In Walzer’s eyes, it deprives the Left of both political intelligence and moral sensitivity. It has found one of its truest expressions in the provincial figure of Bernie Sanders, would-be steward of an isolated and indifferent city on a hill.

Any inquest into Sanders’ foreign policy proclivities should begin by asking if his posture toward the global order would be any different were he standing for office in, say, Belgium or Brazil. Surely it would not, because Sanders’ mistake is to see America as just a normal country like any other. But America is not a “normal” country, and does not function like one in the world. The effort to make it one for the sake of tending to America’s garden would be ruinous. As a German politician put it toward the end of the 19th century: “What good are the best social reforms if the Cossacks come?”